It’s probably one of the most storied accomplishments in all of baseball—and to see it happen twice in such a short period of time is startling.

I am not talking about perfect games, but of the Triple Crown—leading the league in batting average, home runs, and runs batted in. Frank Robinson did it in 1966, and Carl Yastrzemski followed in 1967. Nobody has done it since.

This is probably not the season we’ll be led out of the wilderness, either. Ryan Howard is (somehow) the most likely candidate in the NL, with the lead in RBI and just one behind the NL leader in home runs. But he’s nearly 40 points behind the league leader in batting average, and it’s hard to imagine him closing the gap. (Honestly, given the continued absence of Chase Utley from Philadelphia’s lineup, it’s far easier to imagine him losing the lead in RBI.)

In the AL, there are two players with a lead in one category and in pole position in the others—Josh Hamilton is leading the league in average, and close (but not terribly close) in HR and RBI. Miguel Cabrera leads in RBI and is just a little ways behind in HR and AVG. Of course, for these purposes, having a two-horse race is more damaging than encouraging, because any ground Hamilton makes up hurts Cabrera, and vice versa.

So, where did the Triple Crown winners go? And will we ever get them back?

Let’s be frank—most of the time, your RBI hitters bat in the middle of the lineup. Part of this is because they get the most RBI opportunities, and part of this is because they’re typically the best hitters on their teams (which is why their managers try to get them the most RBI opportunities). A staggering 96 percent of players who were in the top 10 for RBI in a season from 1952-2009 batted third through fifth in the order.

And it’s an effect that has remained remarkably consistent over time. If you want to win the Triple Crown, you need to bat in the middle of the order—or you have almost no hope of leading the league in RBI.

But a funny thing happened, right around the time of our last two Triple Crown winners. Let’s take a look at batting averages and K rates, normalized to the league average, for our middle-of-the-order hitters over time: 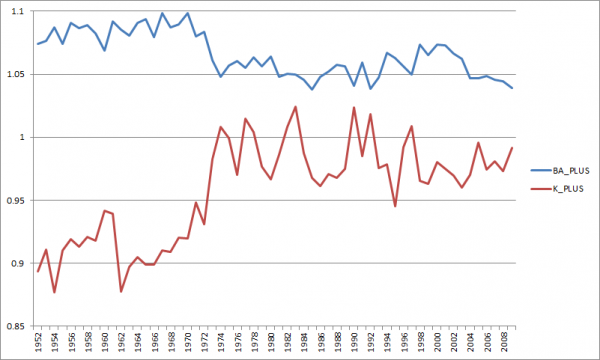 It’s a pretty dramatic shift, especially in the strikeout rates. We know what happened, too—after the Year of the Pitcher in 1968, the rules committee altered the strike zone and the mound to ensure that at least some offense would occur. Middle-of-the-order hitters went from being better than average at avoiding strikeouts to being only average at not whiffing. You can see the obvious effect on batting average—relative to their peers, our middle-of-the-order hitters stopped being quite so above average in terms of batting average.

There’s also a more subtle effect—increasing strikeouts decreases the effect of batting average on balls in play on a hitter’s batting average. BABIP is certainly a skill set for hitters, but it’s one subject to a lot of noise, at least compared to strikeout rates. So not only did our middle-of-the-order hitters become less skilled (relative to the league) at hitting for average, but the spread in batting average comes down as well, making it less likely for a hitter to luck into a substantially better batting average than he perhaps deserved. (There’s also an effect on the other end of things—hitters are less likely to end up with a batting average far worse than they “should” have, but that doesn’t really matter for the Triple Crown.)

This is one possible reason why we’ve seen the relationship between the Triple Crown stats drop across the board. Looking at correlations between the three stats, broken down between 1952-69 and 1970-2009:

It’s a modest dip in the relationship between batting average and home run and RBI, but when you’re talking about the hardest feat in baseball, that modest drop is enough to sabotage one's odds.

You need to be logged in to comment. Login or Subscribe
andland
It would be interesting to see how many times a player has led the league in 2 categories, but not the third. I am guessing HR_RBI would have the most.
Reply to andland
Meurso
Pujols seems to me to have the best shot. Furcal just barely qualifies for the league leaders, and between that and his track record I wouldn't bet on him holding up a .333 average over enough PAs to qualify.

That means guys like Pujols and Howard have more like 15-18 points of BA to make up, which is much more doable. And obviously Pujols is more likely to do that.
Reply to Meurso
jjbehr
Collin, is that a Matisyahu reference (King Without a Crown)?
Reply to jjbehr
mattgold
Isn't it also relevant that the number of players has increased substantially?
Reply to mattgold
greenengineer
exactly - 30 teams instead of 16 mean there is roughly twice the number of eligible players.
Reply to greenengineer
irablum
First off, its not something that happens all the time regardless. only 16 times in 135 years overall.

even including the 5 triple crowns before 1920, only Frank Robinson won only one of each leg. I guess the trick is to win each leg multiple times and hope that your seasons coincide.....
Reply to irablum
collins
Ira, I don't think it follows from the fact that there are now twice as many players as there were in the 1950s that it is half as likely now to have a TC winner, because the worse half of MLB players are much less likely to win it than the better half. Expanding the slate of Best Picture nominees from 5 to 10 didn't make it half as likely for Avatar to win. Expanding the nominees to 100 wouldn't have done so, either.
Reply to collins
TheRealNeal
If the talent pool in 1967 and 2010 were the same, that would be essentially correct, but the pool has also grown over that time as well. I think you can argue that the NFL and to a lesser extent the NBA may be getting athletes who would have surely been baseball players 60 years ago, but the influx of central American and Asian players surely more than compensates for the wide receivers and point guards.
Reply to TheRealNeal
collins
That seems irrelevant. So the league is better today than it was 50 years ago. Accepted for sake of argument. My point is that the greater *size* of the league doesn't make it harder to get a TC because the worse half of the league isn't in competition for the crown anyhow.
Reply to collins
grandslam28
What about Votto?
Reply to grandslam28
mdeuser
Great work, Colin...

I'm not surprised that the correlations between BA & RBI and BA & HR dropped, given that the most likely explanation for the post-1970 trends is that hitters in general--and probably middle-of-the-order hitters in particular--began trading contact (and therefore average) for power.

What puzzles me, then, is that the correlation between HR and RBI didn't increase.

It would be nice to have some follow-up-analysis to help explain this. Specifically:

(1) What happened to the correlation between XBH and RBI--is it possible that middle-of-the-order hitters *did* trade contact for power, but it came out in the form of more doubles and triples?

Getting these answers would help get us to the next level of understanding on the Triple Crown question...