OK, so it wasn’t as dramatic as the Nationals right-handed phenom's first start. What does it mean? I have no idea. He still looked impressive Sunday in beating the Indians. He had some troubles with odd footing at the front of the mound. Was that a factor? Again, I don’t know. Providing analysis of such things invites danger and should be avoided at all costs.

(As far as fantasy impact goes—if somehow you’re in a league where he isn’t owned, you should still grab him. And then let me know about it, because I want to hear about this league.)

But we do have more data on what it is Strasburg is throwing. We can play with that, see where it takes us.

The story so far

I already sliced and diced Strasburg’s first start; this is just an update inclusive of both his first and second starts. First, the summary stats:

Speed versus spin graph of pitches: 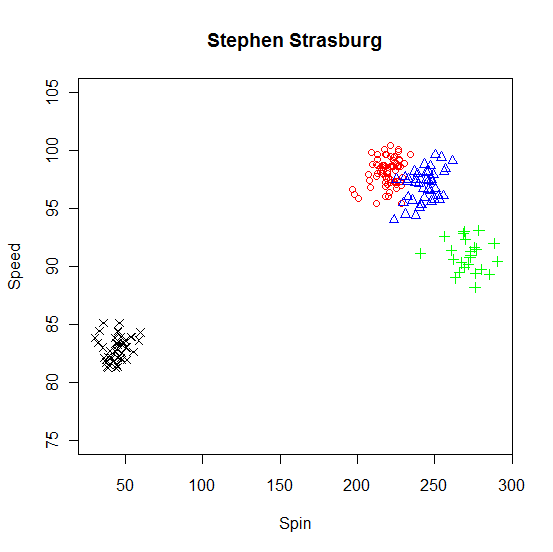 Again, substantially the same as last time. Clustering is not quite as tight as it was before, but that’s to be expected when collating unadjusted data from multiple parks.

So, basically the same Strasburg—as far as “stuff,” anyway—that we saw in his debut. So let’s try looking at things from a different perspective, shall we?

I took the pitches I had classified and found the median of the different Pitch F/X parameters. Then I inputted the values into a modestly refit version of this spreadsheet by Harry Pavlidis.

In essence, what the spreadsheet does is it figures the location of the pitch in three dimensional space (x,y,z) at various points in its flight path, using the parameters listed by Pitch F/X. Each point was figured in steps of 1/55thof a second (let’s call those “ticks” from here on out), starting from two ticks before “release” as measured by Pitch F/X (remember, Pitch F/X reports release at 50 feet from the back of home plate, typically several feet after the pitcher has released the ball) and continuing 24 ticks after “release.”

Here’s a side view of how his pitches break, looking at it from the first base side of home plate:

As you can note, once you back out the release points you can see where they met up around the pitcher’s actual release—once you get to about two ticks (what Gameday reports as release) you can see the separation of the curve from the other pitches, as we saw in the release point graph from last week.

For the changeup, you can see the “late break” of the pitch relative to his fastballs. If the hitter is tracking the pitch as though it’s his fastball, it’s going to look like a strike. If he can’t adjust in time, he’s going to end up swinging right over it.

The curve, meanwhile, typically starts out higher than the other pitches, and “presents” itself to the hitter as a ball. Again, as the pitch gets closer to the hitter it has a more pronounced downward break relative to the fastball, and drops into the zone for a strike.

Again, I want to point out the effects of backing the release point up to earlier in the sequence than is presented by Gameday. At two ticks in, it looks like the horizontal release point for his curveball is in line with his two-seamer and his changeup. If you back up to earlier in the sequence, though, his curveball seems like it’s being released closer to where the four-seam fastball is being released.

Again, as we noted last time, you can see that (relative to his four-seam fastball) the two-seamer “breaks” in to right-handed hitters and away from left-handed hitters. The curve does the opposite­— it sets up inside to right-handers and outside to lefthanders, and breaks back toward the middle of the plate as it gets closer to the batter.

The original title conceived of for this article was “The mean regresses to Stephen Strasburg.” I came up with it around the second inning of Sunday's game and got a good chuckle out of it. Then, well, Strasburg regressed to the mean instead.

You need to be logged in to comment. Login or Subscribe
MHaywood1025
Because there is so much debate around whether SS's breaking ball is a slider or a curve, I say it's time we just name the pitch after him.

In honor of his initials, I nominate the "Slip 'n Slider"
Reply to MHaywood1025
wbricks
Strasburg is still available in most AL only leagues.
Reply to wbricks
alien1011
He might be worth holding on to if he signs with the Yankees in 6 years.
Reply to alien1011