Is small ball back?

That's the premise of Stan McNeal at the Sporting News, at least.

Scouts, catchers and basestealers agree: "The real game of baseball is coming back," Nationals speedster Nyjer Morgan said. "It's a beautiful thing."
Look for more teams to imitate the Angels and Rays with aggressive baserunning. Last year, the Red Sox, Rangers and, in the second half, Athletics picked up their paces. The Mariners, White Sox, Padres and Rockies figure to be among the clubs that join the run fun in 2010.

I won't get into the question of what "real" baseball is – when it comes to watching baseball, I'm not exactly picky. Give me hitters, pitchers and four bases and I'm happy. But is small ball really making a comeback?
Let's look at stolen base attempts per runners on base, from 1993 to 2009: 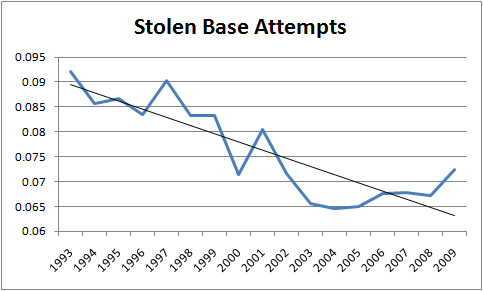 There's a slight uptick there, but it's utterly dwarfed by the steady decline from '93 onward. So what about that other barometer of small ball, the sacrifices? Let's look at sacs (hits and flies) per contact: 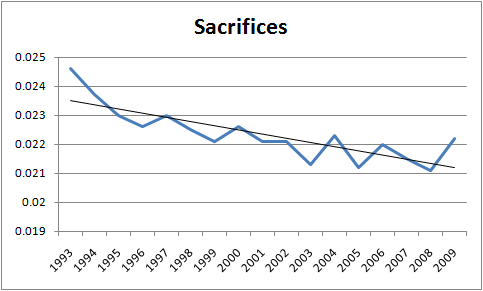 Again, a slight uptick, but not much in the context of recent years, and still pretty low.
Of course, this argument assumes that there's a reason for small ball to return – that home runs are declining. And they really aren't – again, this is the rate per contact: 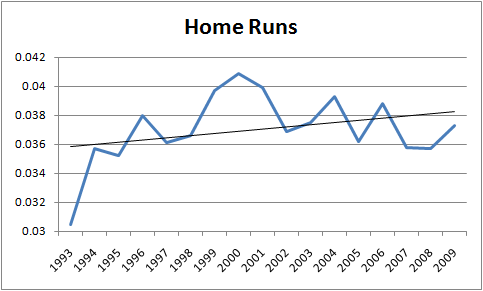 Home runs really aren't on the decline – if you exclude 1993, home run rates have remained essentially flat from 1994-2009. 2009 was a decidedly average year for home runs. If steroid testing is having an affect, it's not on the number of home runs that are being hit.
And we're not seeing a return to small ball.

You need to be logged in to comment. Login or Subscribe
TheRedsMan
To be fair, there's some selection bias here. Why 1993? Are we back to pre-93 levels? Nope. But go back to 2000 and you have two sets of trends in each case.

I doubt that means that small ball is coming back. But the data suggest to me a new plateau that has barely changed since the turn of the century.
Reply to TheRedsMan
sunpar
Why use HR per contact instead of the usual HR per Plate Appearance?

After all, more HR hitting (in absolute terms) usually means less contact and more strikeouts, so filtering out the strikeouts from the denominator may make the HR increases seem faster/larger than it really is.

Your method would seemingly mean that Adam Dunn and Ryan Howard were more prolific HR hitters than Albert Pujols in 2009, which isn't true.
Reply to sunpar
cwyers
The analysis seems to be remarkably insensitive to the change in denominator, actually - I just looked at it per PA, and while obviously the numbers all change, you still see incredible stability in home run rates, and '09 is still incredibly average for the time period under consideration.

As for why contact rates - unfortunately, the article I wrote about contact-based stats is no longer available online. The short version is that looking at contact allows us to evaluate certain features of hitting in isolation of others (in this case, the ability to generate power on contact in isolation of the ability to make contact.)

It is useful - apparently not in this case, as the results are the same no matter how you slice it - if what you want is an incomplete picture; if you want to measure just one skill without looking at others.

In historical comparisons like this, what I'm typically looking for is an idea of how lively the ball was at the time - the liveliness of the ball has an indirect impact on K/BB rates, of course, but if you want to measure it directly those don't tell us much.

To get to the first comment, about why '93 onward - that is historically the point where we see the ball become lively to the point where it sort of defines the modern era of hitting. Some people like to call this the "steroid era." I don't see it. We see a sharp increase in almost EVERYTHING on contact right at 1993, with a pretty level slope both immediately preceding and following that year. Whatever the change was, it was exceedingly sudden and drastic, and has been persistent over time.

And it hasn't been affected by increased steroids testing.
Reply to cwyers
sunpar
Interesting points, and I agree that HRs on contact is the best measure of "power".

However, in the context of the argument you're trying to debunk, the chief concern is not to evaluate the power of players, but the changing nature of the game. So it seems that measuring the prolificacy of HRs is a better measure.

"I just looked at it per PA, and while obviously the numbers all change, you still see incredible stability in home run rates"

Well, I'm suggesting that HR per contact rate would actually inflate the trend (if it's true that K rates have been increasing slightly), and that doing it on a per PA basis would actually show an even more level trend.

Regardless, you said it's insensitive to changes in the denominator, so it's not really important.
Reply to sunpar
alangreene
Since it's a spring training article, I'd think the window you're looking at is more what's happened last year and what will happen this year.

I'm not sure why you'd hold a quick commentary based on extremely recent events to a trend line from 1993.

SB were at their highest level since 2001/2 last year, and several teams have stated the usually overstated intention of running.

I do think more teams are shifting to more of a running game. The rest of article may be bland, but honestly, I think you are being overly dismissive of the upticks.

Just because we're not heading back to the 80s yet doesn't mean there isn't some shift.
Reply to alangreene