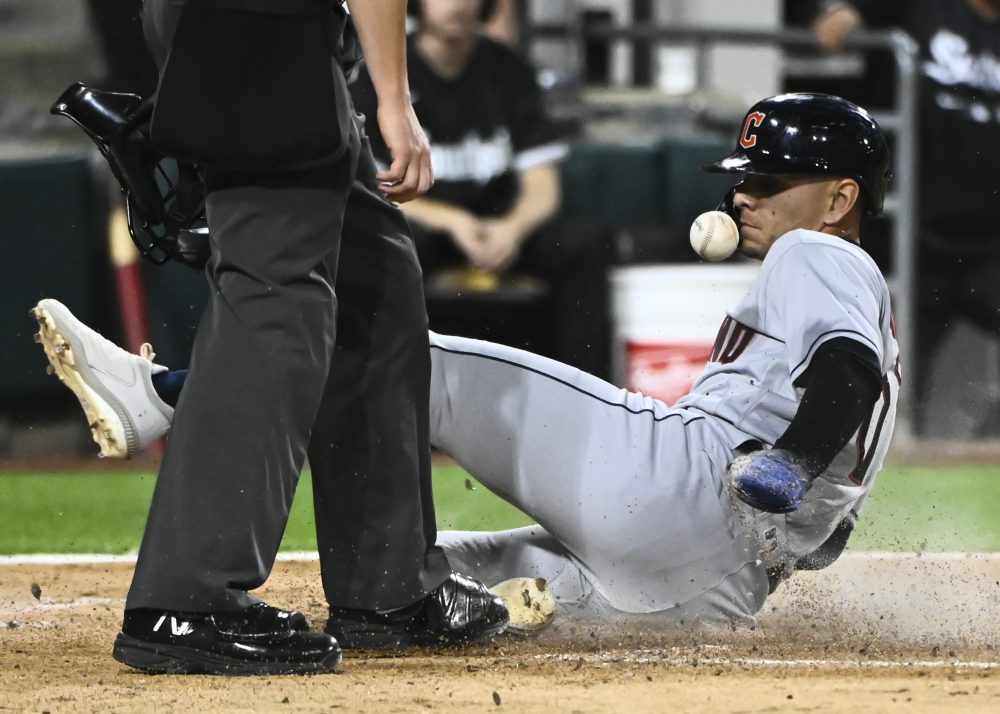 Rather than bury the lede, I’ll start out with the part that matters, the thing that somehow after all these years makes my heart swell with joy.

I did it. I won Tout Wars. It was my second victory in a Tout Wars seasonal league (I won NL-only in 2015 and a DFS competition in 2020). It means a lot to win a second time, but I won’t bore you with a navel-gazing exercise because that shouldn’t be the point of these columns. I’m here to walk you through what worked for me and hopefully provide advice that can allow you to replicate my success in your leagues next year and beyond. 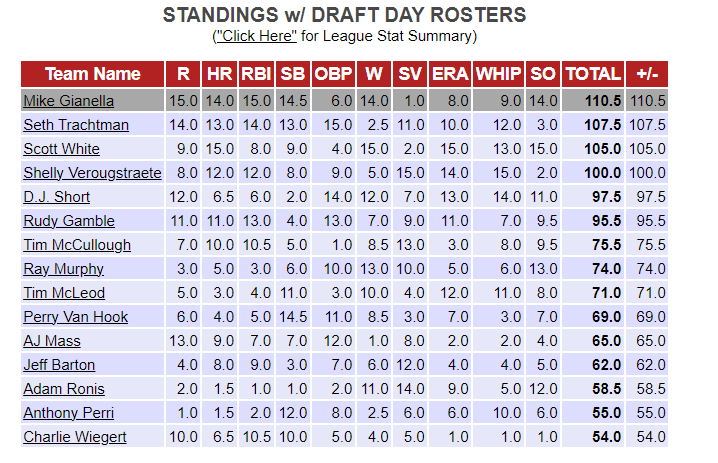 (Standings through games of Tuesday, October 4)

This table (courtesy of Onroto.com) shows the hypothetical draft standings if rosters were simply frozen before Opening Day. I drafted a great offense (64.5 points out of a possible 75) and a solid staff (46). Saves was the only category where I failed. Some of this is because we drafted before the lockout ended and I got stuck with Smith, some of this because I stupidly drafted Trivino. In nine other categories I was dominant or competitive. Beyond the usual “you need to be lucky to win in a room full of sharks like this” disclaimer, here are the things I did well that paid off:

Most draft recaps are dominated by talking points like “I needed ‘x’ amount of power in rounds ‘y through z’” or “I needed to take Nick Castellanos in Round 5 because I didn’t have an outfielder yet.” While I didn’t plan to draft two starting pitchers in the first two rounds followed by two speed-oriented hitters in rounds 3-4, doing so didn’t faze me in the least. I figured (correctly) that I would be able to add plenty of power and OBP later.

Of course, some picks missed the mark. This almost always happens. My big miss was Gallo in the 5th round. Even in an OBP format, he barely delivered above replacement level value. But by pushing for value repeatedly, nearly every other offensive pick I made turned a profit. I didn’t even have a hitter return first round value and barely even got second round value from my best one (Arozarena). But this didn’t matter because…

I only had three offensive players finish in the top 10 in the majors in one of the “standard” 5×5 categories: Yelich in runs, Arozarena in steals, and Cron in RBI. But everyone outside of Gallo was consistent and productive. Cron and Rizzo were the power anchors, Arozarena and Merrifield (before he was traded to the Blue Jays) were the steals anchors, and consistent playing time led to lots of runs and RBI. I could have been a little more aggressive adding offense in-season, but up until the last month I was mostly cruising there. This was mostly thanks to Andrés Giménez, a player I stole in the reserve rounds because I followed my own advice of…

Don’t Waste (Too Many) Reserve Picks on Save Specs

It’s great to compete in or win the saves category, but it is just one category. Using more than three of your 29 draft slots on closers and could-be closers comes with an opportunity cost. In 2021, Emmanuel Clase was the only reliever taken in the reserve rounds of NFBC drafts who finished as a Top-100 player overall. Meanwhile, eight hitters and two starting pitchers taken in that same ADP bracket accomplished this feat.

Nearly one-fourth of the reserve picks in Tout were utilized on relievers. Thirteen of these 22 relievers saved between 0-2 games with another four saving 3-5 games apiece. Only two relievers taken on reserve cracked double digits: Kyle Finnegan (11) and Ian Kennedy (10). Meanwhile, I was able to grab Giménez in the 25th round, about three rounds after his NFBC ADP because multiple teams kept chasing the false hope of grabbing a closer late. Most of my reserve picks didn’t work out but being given a larger margin of error by a room that was futilely adamant on pushing for saves late allowed me to get Giménez.

Back in late 2019/early 2020, I noticed that the best pitchers were more valuable not because they suddenly had become more reliable but because overall the pitchers at the middle and the bottom of the pool are worse. My strategy since then has been to try to take three starting pitchers in the first eight rounds. Where those pitchers are drafted isn’t essential (it’s OK to go 6-7-8, for example), but waiting too long on pitching in recent seasons has led to disaster.

As I mentioned above, Burnes/Scherzer at 1-2 wasn’t part of any grand plan but provided two stable anchors who finished among the top-15 SP, even though neither one was an inner circle fantasy ace like Justin Verlander or Sandy Alcantara. Darvish fit this profile as well: not a Top 10 fantasy SP but also an SP1. This foundation made it relatively easy for me not to spend too much time speculating on risky starters or trying to stream two-start pitchers who would hurt my ratios.

No, this isn’t FAAB advice. Tout Wars drafted on March 8, two days before the owner-imposed MLB lockout ended. It wasn’t part of any grand plan, but I wound up with four players who were unsigned at the time of the draft: Correa, Rizzo, Kershaw, and Pham. Correa was valued properly, but the other three were bargains by my lights. You won’t be able to use this advice ever again (I hope), but the more general takeaway is many drafters are susceptible to putting too much weight on breaking or recent news. We knew nearly every player was going to sign and sign quickly (sorry, Michael Conforto drafters) but many of these players still slipped too far.

I knew I had a solid foundation early. The lack of significant offensive injuries led to me mostly standing pat on offense – both in terms of players and the team I drafted. I lost 8.5 points on offense from the team I drafted to the end of the season, with 5 of those points coming in home runs. Thankfully, I was able to gain 16 pitching points through action and inaction. Come again?

My most glaring deficiency was saves. But I plugged away all season via FAAB and kept adding relievers. I got David Robertson very early, then added Paul Sewald to the mix later. My biggest acquisition came via trade, when I swapped Nolan Gorman shortly after he was called up for Ryan Pressley. I didn’t expect to win the category outright, but with the rest of the team I had assembled that wasn’t necessary. Nine points in saves was sufficient.

I jumped 12 combined points in ERA and WHIP from the team I drafted until the final bell. Some of this was due to the positive contributions of the relievers mentioned above along with very timely and judicious usage of free agents J.T. Brubaker and German Marquez (no, really!). But most of it was because I was willing to go with boring back-end options Marco Gonzales and Johnny Cueto most weeks rather than chase bad two-start pitchers. “Two-start pitchers are almost always better than one-start pitchers” is common mixed league philosophy and this year I rejected it. Even factoring in the strikeouts I “lost” I still picked up seven points.

My team was more consistently very good than great, but that consistency paid dividends. I didn’t end a week in first place until June 26 (85 games into the regular season) and didn’t take a double-digit lead until August 7 (109 games). Tout Wars’ stat service On Roto allows you to go back and generate retroactive standings by date range and I only finished “first” in one month: July. I was second in April, third in June, fourth in August and September, and seventh in May. The whole was greater than the sum of its parts, and my plodding, methodical staying of the course allowed me to push toward first place and led me to that elusive second seasonal Tout title.

Thanks as always to Jeff Erickson, Peter Kreutzer, Ron Shandler, Brian Walton, and Todd Zola for all the hard work they do to not only keep Tout Wars running but in adding new leagues and formats and finding more amazing analysts to join our ever-expanding fantasy family. I’m looking forward to defending my title in 2023!

You need to be logged in to comment. Login or Subscribe
Thomas Cook
Congrats on an excellent year, Mike!! As always, really enjoyed reading your weekly recaps of the "prestige" leagues.
Reply to Thomas
Mike Gianella
Thanks Thomas
Reply to Mike