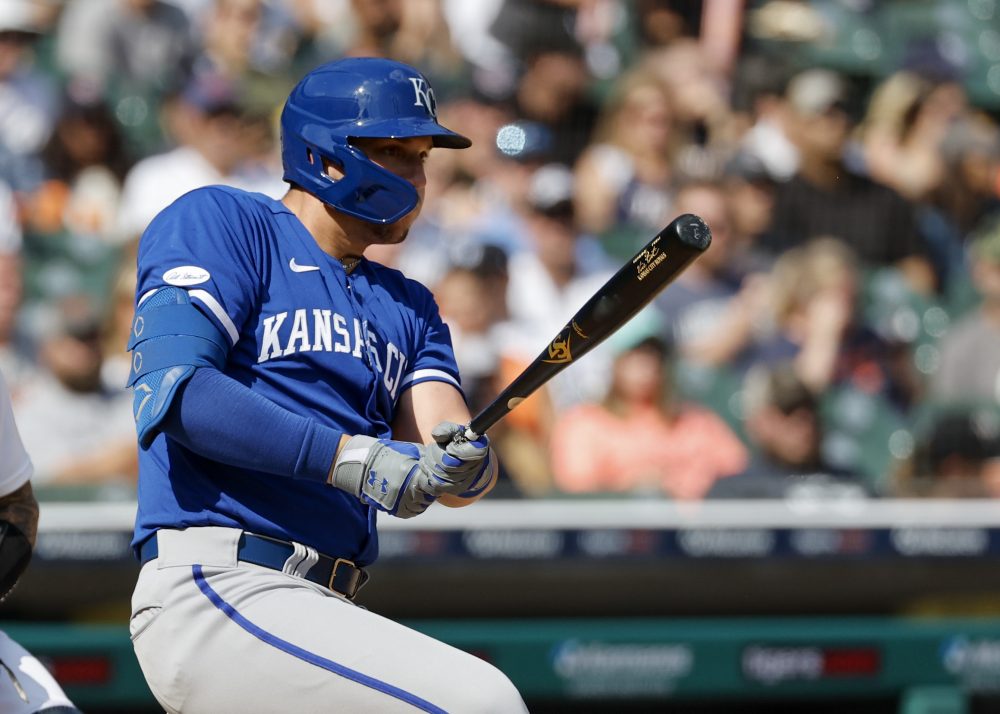 Vinnie Pasquantino $147 (Maximum Bid $343, Minimum Bid $14)
Mirroring what Jarrett Seidler said in The Call-Up piece for Pasquantino, it’s probably too late for “Italian Breakfast” to be the biggest fantasy FAAB earner, but he’s just as likely as not to be the best fantasy FAAB earner the rest of the way. He just hits. There’s not much more to say about him than what Seidler and Howard Megdal said last week. Pasquantino’s fantasy ceiling is limited by a lack of speed and a non-elite AVG, but as far as rookie hitters go, he’s one of the safest bets there is. Ryan Mountcastle is a good fantasy comp in AVG leagues. The only other potential caveat is that in formats that use minor league games played from this year, he’s currently DH-only.

Darick Hall $50 ($151, $2)
The local, pejorative comp I have heard for Hall is Darin Ruf, a similar, late blooming, defensively challenged hitter who destroyed minor league pitching but was overmatched in the majors. This comp shows that our memories play tricks on us, as Ruf socked 14 home runs in 293 PA in his first extended opportunity for the Phillies way back in 2013. Maybe Hall isn’t even that good for that long, but the power is legitimate, the park is great for home runs, and if you have a hole at first or corner this is an upside play worth trying, while understanding that the downside is that he washes out in a month or so. $50 is a fair price to find out.

Will Smith $39 ($141, $1)
A.J. Minter $14 ($72, $1)
With Atlanta understandably exercising an abundance of caution and placing Kenley Jansen on the IL due to an irregular heartbeat, Smith is the short-term favorite for saves. He has picked up the last two, and it helps his cause that Minter was saddled with the loss on Sunday. Smith is a decent add if you’re starving for saves, but the expectation is Jansen should be back in two or three weeks on the long end, if not when first eligible. If you’ve been reading my pieces about middle relievers and fantasy value, you already know that Minter is a useful addition even if Smith gobbles up all the non-Jansen saves. I put my money where my pen is and added Minter in my TGFBI bracket this week.

Luis Patiño $30 ($82, $5)
Patiño is working his way back from an oblique injury that has sidelined him since April and should be up with the Rays later this month. It’s an open question as to what his role will be, and if he’s a multi inning reliever as opposed to a starter it will dampen his value. I like him as a stash if you already have a solid rotation and are looking to dream on a high upside arm. If you’re desperate for starts and strikeouts you might need to look elsewhere, particularly in the short-term.

Yusei Kikuchi $22 ($66, $1)
Kikuchi’s numbers are bad, but a deeper dive into his line shows he’s just been all over the place. He was great in May (2.36 ERA) and then fell apart in June (7.17 ERA). His start against the Rays on June 30 looks great on the surface, but even in that game he was still getting hit hard, allowing his highest average exit velocity of the season. On paper, his two-start week at Oakland and at Seattle looks like a no-brainer in 15-team mixed and mono leagues, but, to crib from my colleague Carlos Marcano I would put Kikuchi firmly in the YOLO category this week.

Dean Kremer $16 ($45, $1)
Kremer was profiled in this space last week and added 12 more TGFBI suitors to his ranks after seven shutout innings with five strikeouts in Seattle last Tuesday. He remains a poor bet on paper, but it is completely understandable if you want to ride the hot hand and see what happens, particularly in what looks like a pair of softer matchups at home yesterday against Texas and on Saturday against the Angels. The start yesterday in Texas didn’t go well (he gave up five earned in 4 2/3 innings), which either confirms my suspicions or means nothing.

Jake Meyers $12 ($31, $1)
Meyers is another repeater from last week. Chas McCormick is back from the minors, but only because Michael Brantley landed on the IL with a shoulder injury. Meyers is a decent grinder if he’s getting full-time reps, keeping in mind that he is not likely to provide a lot of power or speed. Batting seventh in a strong Astros lineup aids his RBI opportunities.

Mitch White $12 ($23, $1)
White is yet another repeater from last week. I told you to stay away from him outside of mono leagues, and I was sort of right and sort of wrong (which sounds like a stanza from an ill-conceived country song). White’s ERA was good, his WHIP was subpar, he only struck out three batters in 4 2/3 innings, and he didn’t stick around long enough to get the win. The matchups are softer this week at home against the Rockies and Cubs, and I’d recommend using him unless wins take priority for you over anything else.

Leody Taveras $12 ($35, $1)
Taveras has delivered an acceptable level of performance for the Rangers, but with only one steal in 47 PA isn’t delivering the thing that gets our fantasy juices flowing. He has cut down on the strikeouts, but the walk-to-strikeout rate is still poor (two-to-12), and I still worry he’s going to get exposed by major-league pitching. If you’re desperate for speed he is a good player to stash and take a wait-and-see approach on. I understand why teams are taking this risk: When it comes to steals the free agent pool is nearly barren.

At the very least, Villar is an interesting thought exercise. He was terrible this season with the Cubs, but if he can even by a fraction of the player he was during his peak he will be one of the better FAAB additions of the year in AL-only. One challenge with grabbing someone like Villar is the major-league trade deadline on August 2 could bring over a vastly superior talent. Is an extra month of Villar worth losing out on, say, Luis Castillo on August 3? It’s a rhetorical question that will be a reality in about four weeks.

There is a good deal of shuffling at the bottom of AL lineups that could lead to opportunity. Haggerty could be a better play than Villar if he can find regular playing time on the Mariners. McCormick had been demoted but there’s nothing wrong with him offensively and Brantley’s injury gives him a new opportunity. The Angels look like they’re going to give Stefanic an honest shot at second base. All these hitters are weak fliers in mixed but solid in mono as long as they get the playing time.

I made my first in-season FAAB buy of the season, grabbing McHugh at $1. I thought briefly about Corbin and even more briefly about Minor but decided protecting my rate stats and hoping for the occasional cheap win from McHugh was more important than trying to push up my strikeout totals with Corbin and Minor.

I’m in second place and the team in first got Hall for $1. That stinks, but I’m locked at corner/DH with Paul Goldschmidt, Nolan Arenado, C.J. Cron, and Nelson Cruz. If Hall had been OF-eligible, I would have bid $1 on him instead of McHugh.

You need to be logged in to comment. Login or Subscribe
Jon Crate
I picked up Jake Meyers this week to replace Tony Kemp. It's annoying because I love Kemp as a player, but he just isn't getting on base at a high enough clip this year, and it isn't like there's anyone to drive him in right now anyway. I probably lose some OBP but there's potential for more counting stats.
Reply to Jon