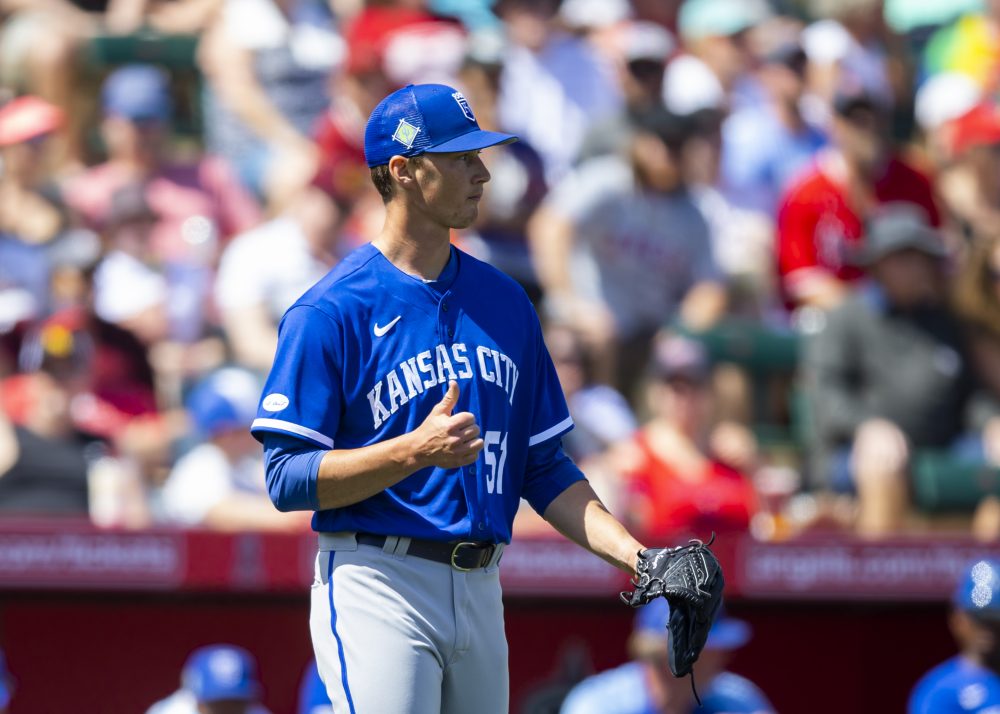 Nolan Gorman $162 (Maximum Bid: $305, Minimum Bid: $68)
In leagues like Tout Wars – where you are allowed to stash available minor leaguers – Gorman was long gone. I grabbed him three weeks ago for $10 in my other 15-team mixed league, hoping he’d be up by mid-May. Close enough. Gorman is well known and has been extensively profiled, so he won’t get the full treatment again here. His long-term future as a high power, middle infield bat is as certain as it can be for any prospect. The question is if he’ll hit for enough batting average to be OK in his first pass or if he’ll struggle in an environment where many young hitters are struggling. My bet in TGFBI was $133 (I did not get him), which had less to do with a lack of belief in Gorman and more to do with not having a significant need up the middle. One mere strikeout in his first 12 plate appearances is an extremely encouraging sign. Notably, Adam Lawler had interesting thoughts on how his plate discipline might play earlier this week.

Brady Singer $51 ($200, $9)
In February, Brian Menéndez penned a wonderful piece about Singer. I highly recommend reading it, but the gist was that despite being a two-pitch pitcher, Singer could be the rare exception who could make this work because of the ability he has to change the shapes he can produce with the pitch, essentially adding “new” pitches to his arsenal. Because he started the season in the bullpen in a non-closing role, Singer was off the fantasy radar in April, but he has now had two great starts since joining the rotation. On paper, he’s an AL-only matchup this week in Minnesota, but I suspect the model hasn’t caught up to the skills change. Singer isn’t quite a must-add, but he’s very close.

On May 14, Calhoun had one home run in 91 PA and a miserable .207/.242/.287 slash line. As of Monday morning, he has six home runs with a .243/.290/.443 line. The raw power has been there for Calhoun since 2019, when he broke through with 33 dingers for the Angels, and the only thing that could keep him from hitting 25-30 home runs again is a platoon. Calhoun’s AVG will hurt a little, but in an environment where some hitters are struggling to get the ball over the fence, he’s a must add.

Martín Pérez $38 ($75, $5)
On June 27, 2012, Martín Pérez made his major league debut, getting shelled in a 2/3 inning relief appearance against the Tigers. He’s been the prototype of a serviceable innings eater ever since, with a career 66-71 won-loss record and a 4.58 ERA in 229 career appearances (199 starts). Not much has changed for him in the decade he has been in the majors, except for the fact that the league throws much harder than it used to, so Pérez’s heater went from being above average to just below average. He’s getting results so far, though, and while his DRA suggests a career year could be coming, I’m betting more on something close to a 4.00 ERA and the low strikeout arm he always has been. He’s a good matchup play – and I’d use him this week in deep mixed at Oakland – but temper those expectations.

Jeffrey Springs $29 ($58, $6)
Springs is yet another in a long line of pitchers the Rays picked up on the cheap and eventually turned into someone useful. He started the year in the pen but has now moved to the rotation with solid results. The stuff looks underwhelming on paper, particularly the fastball velocity, but it’s a three-pitch mix that’s working for him right now. Springs has focused far more heavily on his change in lieu of his slider, offering greater separation and making his 92-mph heater harder to pick up. I’m not rushing to pick him up for this week’s matchup against the Yankees, but if you can stash him and put him on your bench, he’s worthy of an add.

David Peterson $23 ($54, $2)
The addition of Max Scherzer and the emergence of Tylor Megill made Peterson into more of a Triple-A depth arm than a rotation piece heading into 2022, but it was likely Peterson would be pressed into duty at some point for the Amazins in 2022. He had already done some fill-in work this year, but injuries to both of the aforementioned hurlers now make Peterson a more permanent member of the Mets rotation, starting with last night’s start in San Francisco. He is more steady than spectacular, but his lack of premium velocity is offset by his large 6’6” frame and arm angle, making his stuff tough to pick up when things are going well. Peterson is a good target if wins and ratios are more of a concern than strikeouts. He is the sort of pitcher who is helped by the improved Mets defense.

Brendan Donovan $22 ($52, $1)
Donovan is the prototypical non-elite Cardinals prospect who is going to annoy everyone (except the Cardinals and their fans, I presume) by exceeding expectations. His minor league line was steady yet unspectacular except for the batting average, but in an environment where teams are struggling to hit for average, Donovan will be an asset for St. Louis, even if he is more of a utility bat than a starter. The question is if he gets enough playing time to be worthwhile in fantasy. Tyler O’Neill’s injury keeps Donovan in the lineup for now, but when O’Neill returns the path to reps might become more challenging. Donovan doesn’t have enough power or speed to carry in anything outside of NL-only as a part-timer. He will need to start to be useful in mixed.

Eli White $21 ($59, $3)
Eli White is what fantasy managers told themselves was the worst-case scenario last year when they overreached for fellow Ranger Leody Taveras. “Sure, he might not hit, but even if he doesn’t hit, he’ll steal a ton of bases and provide enough defense to justify a spot on the roster.” You’re walking the tightrope with White, as his eight steals are great, but his .194/.296/.274 slash line is unacceptable, and the arrow is pointing in the wrong direction since the Rangers inserted him into the lineup. The 13 percent walk rate could save him, but I’m guessing he won’t be starting in about a month. We might even see Leody again.

Kyle Freeland $15 ($45, $1)
If you’re going to stream Freeland, this is the week to do it. He has two road starts in Pittsburgh and Washington. His ERA is trending positively this month, but the peripherals say he’s the same guy he has always been. Being a Rockies pitcher is always going to suck, and maybe Freeland would have been a useful fantasy arm on any other major league team, but he isn’t so he won’t be.

Emmanuel Rivera $11 ($48, $1)
Rivera looked like he might have unlocked something in the minors in 2021, hitting 19 home runs in 282 PA. He then broke his hamate bone shortly after his major league promotion and after he returned the power was gone. Hamate bone injuries can sap power even after a player makes a “healthy” return, and I wondered in this year’s BP Annual if he could eventually provide a longball boost. So far in a limited sample he has, with three home runs in 54 PA. His margin for error is razor thin, as the Royals have Hunter Dozier and a wave of hitting prospects close to knocking on the door, but Rivera is a fine add for now if he is starting and mashing. Third base looked weak heading into 2022 and still looks weak, which adds to Rivera’s value.

There was significant overlap between TGFBI and Tout AL this week, and far more than usual. Typically, players are taken 1-3 weeks earlier in a mono league than they are in a mixed. Rivera’s two home runs and Singer’s two excellent starts last week turned them from fantasy non-entities – even in AL-only – to must haves in only and deep mixed. It happens. Pérez doesn’t quite fit this mold, but his pickup in both formats is less about performance and more about his utility in what looks like a soft-landing spot in Oakland this week.

Cueto and Trammell are the non-repeaters who interest me most. Cueto’s nothing close to the great pitcher he was during his peak with the Reds way back from 2011-2014, but the mush ball will help him a great deal. Trammell crashed and burned in 2021, but he’s back with the Mariners and has a window to impress before Kyle Lewis is ready and could even survive after that. He has the feel of a washed-out prospect but doesn’t turn 25 until September (for September, Brendan Donovan is already 25 and didn’t even debut until this year).

It was a very light week in LABR NL. Donovan was somewhat surprisingly still available. Morel’s versatility and power/speed combination mean we could be talking about him in the TGFBI section of this piece in two or three weeks. His aggressiveness at the plate also mean he could get exposed and find himself back at Triple-A in short order.

There were the usual pitching stabs in the dark. Pepiot is the best of the bunch if he gets the start this week against the Diamondbacks. Williams profiles surprisingly well in a start at home against the Phillies.

Note: Pepiot was an ineligible free agent in LABR and thrown back.