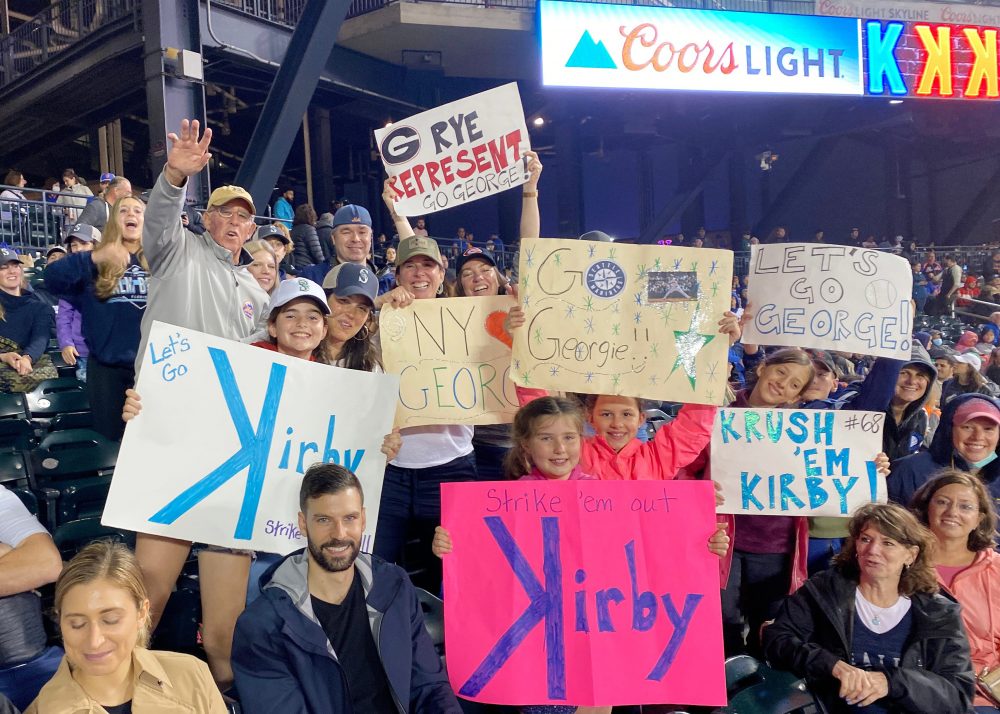 (A brief programming note: Next week’s FAAB Review will be published on Tuesday due to a personal scheduling conflict.)

George Kirby $276 (Maximum bid $703, $143)
I don’t utter “wow” very often and I save my “whoas” for the horses I’ve got on my 27-acre farm up in the Catskills, but the $703 winning bid on Kirby gave me plenty of pause. The ceiling for Kirby is extremely high, but he’s not even the best pitching prospect who will be available this season (that would be Grayson Rodriguez) and there are still a few questions about his secondary offerings. The fastball is no joke, and the command is superb, so whether Kirby is this year’s version of Alek Manoah or a more typical, up-and-down rookie hinges on the on-the-job development of his off-speed stuff. It could all work, but I agree with my colleague Mark Barry’s assessment on the fantasy side of things in The Call-Up that Kirby is probably more of a fantasy SP3 or SP4 in 2022, which is good but unlikely to be worth some of these break-the-bank bids.

Alek Thomas $198 ($334, $74)
Where I was conservative with my Kirby bid, I was aggressive with Thomas, grabbing him for $164 in my TGFBI bracket. I like that he is hitting right out of the chute and that the demotion of Seth Beer gives Thomas a permanent lineup slot. Thomas has always been labeled as a toolsy prospect whose hit tool always ran the risk of collapsing, but it has carried him all the way to the majors so far, with the bonus that he isn’t a high whiff guy. 25/15 is the dream, but a 20/10 projection with a .270 AVG is more realistic, which isn’t bad these days.

Kyle Bradish $69 ($150, $14)
I wrote about Bradish two weeks ago, and since then he has had one poor start against the Twins and one very good start on the road against the Cardinals, with 11 punchouts in seven innings. I suspect if you flipped the order of these two starts that Bradish would have been less aggressively pursued this week. It is a rough pair of matchups for him with the Yankees and Rays at home, but this might be the last time you’re going to get an opportunity to take the plunge in deeper leagues.

Chase Silseth $34 ($81, $2)
Silseth is the true definition of a pop-up prospect: someone that made everyone say “who?” when he made his major-league debut over the weekend. He throws hard, but the scouting reports say that his fastball is too straight, meaning his secondaries must be nearly perfect for him to succeed. His debut mostly featured a splitter in addition to the fastball with a mid-80s slider mixed in as well. Silseth has probably earned another start and if it comes at home against the Athletics, it would be a solid matchup.

Rowan Wick $29 ($101, $1)
Wick is only the fill-in closer while David Robertson is on the COVID-IL, but he has pitched very well for the Cubs in Robertson’s absence and established himself in the role while Robertson is out. We should call him The Milkshake because his stuff keeps (almost) all the balls in the yard, but his control always puts him on the razor’s edge. It is a complete unknown if Wick keeps the job or if Robertson gets it back when he’s healthy. He is worth a few bucks as a short term play this week.

Gavin Sheets $20 ($88, $1)
Sheets started the season as DH-only but now has outfield eligibility in nearly every format (he has played 12 games there this year). The .232/.284/.415 line doesn’t look like anything special, but it is slightly above league average in 2022’s subdued offensive context. Eloy Jiménez’s injury has permitted Sheets to cement himself into a semi-regular role on the strong side of a platoon with Adam Engel, and 20-25 home runs isn’t out of the question if he can hang on to a regular gig all season.

Felix Bautista $19 ($57, $3)
As is the case with many hard-throwing relievers, it all comes down to control for Bautista. If he can maintain it, you’re looking at a stud arm with a near 100 mph fastball with a power curve that sits in the low-to-mid-80s. If the command wavers, you’re looking at a minor-league reliever. Bautista has looked great so far and is now next in line behind Jorge Lopez, should Lopez falter. There hasn’t been a save opportunity for Baltimore since Lopez returned from a brief absence, but I suspect he hasn’t done anything to lose the gig.

Brad Miller $19 ($56, $2)
Miller has been scorching in May, with three home runs and three steals in a mere 26 plate appearances. Therein lies the rub, as Miller will almost always sit against southpaws, thus limiting his value to some degree. If you have the bench space to roster a platoon player, then Miller offers a great deal of utility and flexibility for your fantasy team. If not, he is a tough hitter to find a fit for, especially in leagues with shallow benches.

William Contreras $13 ($96, $1)
Contreras’ value rest to some degree on Ronald Acuña Jr.’s health. Acuna missed four straight games last week with a groin injury, allowing Contreras to DH on the days where he wasn’t catching. If he can maintain regular plate appearances, he is a must add in two-catcher formats, as he has the potential to be one of the best power hitting backstops in the league. If Acuna is healthy, Contreras is difficult to justify, even in deep mixed.

Christian Bethancourt $5 ($14, $1)
Bethancourt is splitting time between catcher and first base for the A’s. It is his catcher eligibility that makes him worth considering almost everywhere. He hasn’t done much with the bat for Oakland but has two stolen bases and some power projection. If you don’t do what the Athletics do and use Bethancourt as your first baseman, he is a fine, albeit boring, second catcher in deep mixed and mono leagues.

For the second consecutive week, there was plenty of offense to go around in Tout Wars AL. This doesn’t mean that there was suddenly a lot of quality offense to go around, but in AL-only you get what you get and you don’t get upset. Souza’s a likely starter in right for the Mariners, and while his 30-home run, 16 steal season happened way back in 2017 he could hit a hot streak for the next week or two and be a worthy addition. Dubón starts off on the bench for the Astros but could find his way into some center field reps. He could also find himself battling Aledmys Diaz for playing time at short if Jeremy Peña’s injury requires an IL stint.

One reason I recommend studying mono league bids even if you don’t play in mono leagues is because it sometimes provides a sneak preview of who you might be bidding on 2-3 weeks from now. Strahm and Schreiber are intriguing stealth plays in a terrible Red Sox bullpen while Vest could be the closer in Detroit if things continue to head south for Gregory Soto. These aren’t the kinds of pitchers I was thinking about before this weekend but are worth taking a closer look at based on the winning bids in a solid league like Tout Wars.

I profiled Contreras above. He is even more appealing in NL-only, where some team’s second catchers are vacant spots that are preferable to batting average sinkholes.

Starting pitching is difficult to come by in mono leagues, and when it is available there are usually more warts than in the Okefenokee Swamp. Poteet is an injury fill-in for Jesús Luzardo and gets his first start of 2022 tomorrow. He profiles as a low strikeout control guy who gets by because of that control and keeping the ball in the yard. Eh. I have Thompson in another one of my NL-only leagues and he has been on my bench almost all year. Davies is another low strikeout arm who needs everything to be perfect to be a mid-tier arm in mono. He is slated for a start in Los Angeles.

The bullpen speculation wasn’t just limited to Tout AL. Hoffman, Mantiply and Bass are all low-level saves speculation who could pay off. Maybe they won’t, but carrying a reliever for a week or two to see what happens isn’t the worst strategy.