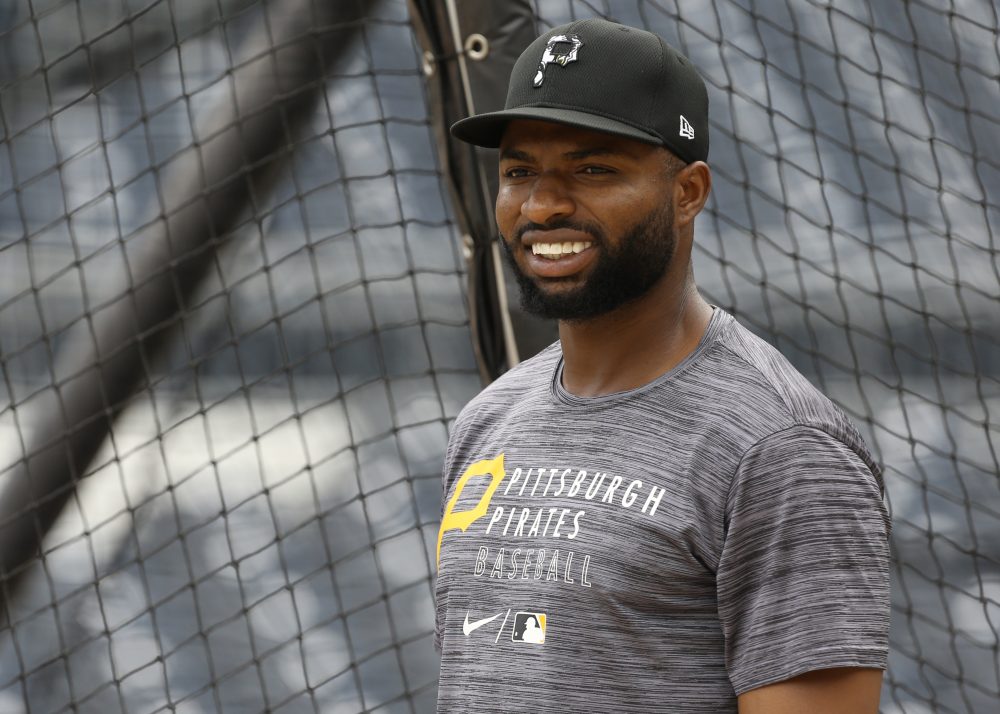 This article was originally published on November 2.

So, a little background on me. We’ll call it an origin story, if you will. In November 2015, I emailed Bret Sayre about writing for The Dynasty Guru. Until that point, I had been a casual observer and admirer of the TDG/BP community, but I hadn’t peeked behind the curtain to see how the sausage was made. As it turned out, Bret magnanimously allowed me to write for his site, and a year later I joined the team at BP. The rest, as they say, is … I guess it’s technically history, but just in the less groundbreaking and/or important sense.

I tell you this not out of self-importance (although I guess it’s not not about that) but in order to get something off my chest. It’s about Gregory Polanco. Actually, it’s more about being wrong. The writing sample that I submitted all the way back in 2015 focused on Polanco as a breakout candidate for the 2016 season. Here’s a little taste of what 2015 Mark had to offer:

“On May 10, 2014, I went to see Polanco. At the time, he was hitting .368 and didn’t seem long for AAA. Opposing Polanco on the mound for the visiting Norfolk Tides was fellow prospect Kevin Gausman. In the 1st inning, Polanco launched a triple off the center field wall that, well, just sounded different. He would debut in the big leagues exactly one month later.

Sure that totally sounds like an old-school scout type thing to say. And no, I don’t have an 80/20 grade on his significant other to judge his confidence or care if he “looks good in the uniform” (he does, btw). But I do have some numbers to back up my claim.”

Not bad, 2015 Mark. Not good, but also not bad. I also made the extremely bold prediction of Polanco being a .265/.335/.415 guy waiting to happen, so you can clearly see that my history of tepid takes runs deep.

Anyway, I hung on to the hope that Polanco had the capability of being a fantasy stud. I even asked Santa Claus to bring the slugger health one Christmas, and I almost torpedoed my TINO relationship during a Table for Two column during the pandemic offseason—setting myself up for this gem:

“JP: Ultimately, I have no confidence that Polanco will ever hit for a good batting average. That puts a lot of pressure on his speed, which has declined over the past three seasons, and his power. He did swat 20-plus homers in 2018, but shoulder issues plagued him last year and it reportedly could be a recurring problem going forward. So, I guess, what’s the realistic (not best-case) upside? A .250 batting average with 25 homers and 10 stolen bases? So … Kevin Pillar? I’m not paying much for that. (MB: I think that’s the meanest thing you’ve ever said to me.)”

So, after a two-season stretch that produced a line of .191/.261/.354 and a subsequent release from the organization, I decided to look back on my process. One thing that I especially liked about the lefty was his ability to make contact. From 2014-2018, Polanco’s swinging-strike rate averaged just under nine percent. He didn’t strike out much, and while he wasn’t Votto-ian in his ability to work a walk, he was comfortably better than average in that area. That ability to not give outs away provided more chances on the bases, as well. During that stretch, Polanco stole double-digit bags in every year but an injury-riddled 2017.

But let’s talk about those injuries, and let’s do it with one of the handy Injury Tools now available at Baseball Prospectus. 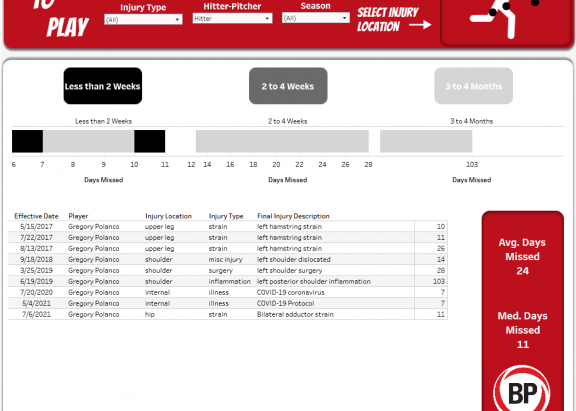 While Polanco might not be Giancarlo Stanton reputationally, he was afflicted by nagging injuries in a couple of places that seem prone to lingering, the hamstring and (especially) the shoulder. When Polanco dislocated his shoulder in 2018, it happened in the midst of his best offensive season, when he smashed 23 homers and swiped 12 bags in 535 trips to the plate with a 110 DRC+. The fact that he was starting to round into form made the injury all the more devastating. After a middling start to the 2018 season, Polanco hit .281/.354/.547 with 15 homers and nine steals (in 10 tries) in 318 plate appearances from June 1 to the fateful injury date. Just for funsies, and for my mental sanity, let’s prorate those counting stats with the workload of his healthiest campaign (153 games and 652 plate appearances in 2015). Maintaining this form for a full season would’ve netted Polanco 31 homers, 18 steals, 90 runs, and 115 RBI. I know this isn’t how realistic projections work, but I just needed to lay the case for past optimism.

Polanco went under the knife in September 2018, and his recovery cost him roughly the first month of 2019. He reinjured the shoulder in June and didn’t return until Summer Camp (TM) 2020. Let’s look at some fun numbers:

Post-surgery Polanco was basically a different dude from pre-surgery Polanco, nevermind the heating-up Polanco from the back end of 2018. Lest you think that this is just going to be a “well, if he didn’t get injured” stroll down memory lane, rest assured. I said at the beginning that this was a piece about being wrong, and I was wrong about Polanco. Still, I was wrong about how I valued Polanco after his surgery. We’ll never know about the other guy.

Maybe it was the rose-colored glasses I used for Polanco based on personal history, or maybe it was just wanting to stick it out with one of My Guys. Either way, it’s hard to imagine advocating for someone with the peripherals that he has produced over the last couple of seasons. Since 2019, his contact numbers have plummeted (which is one of my biggest red flags when projecting performance), while chasing and swinging more frequently. His once near-elite swinging-strike rate ballooned to around 16 percent, roughly five percent worse than league average. He has also been drawing walks at a lower clip, which cuts into his stolen-base attempts. He also stopped hitting the ball to all fields, mostly pulling fly balls since the surgery. His power numbers don’t look that bad, but they’re not markedly better than they were, and part of Polanco’s intrigue was his ability to hit for decent average while posting power numbers that didn’t require selling out.

Basically every number pointed to this player not being a reliable fantasy option. Apparently, the only thing I was looking at was the name on the player card. Call it stubbornness on my part, sure, but I do think that there’s a lesson to be learned here. I picked Polanco and rooted for Polanco, but that’s not always a smart way to run a fantasy team—clearly. Knowing when to cut bait is one of the most important parts of managing a fantasy roster, and it’s something that I still have difficulty doing. Maybe Polanco comes back, as a new member of the Blue Jays organization, and that would be awesome. But it’s not something that I (nor anyone) should expect or pay a high (or any) cost to acquire. When a prospect graduates to the big leagues, they have all the hope and promise in the world. Their major-league careers haven’t been written yet. But at the same time, the prospect sheen should wear off immediately, and we need to base future decisions on present production and projection.

Now, would I have some interest if Polanco looks great in Dunedin this coming February? Well, I refuse to answer that question. It might ruin my whole “cutting bait” spiel.