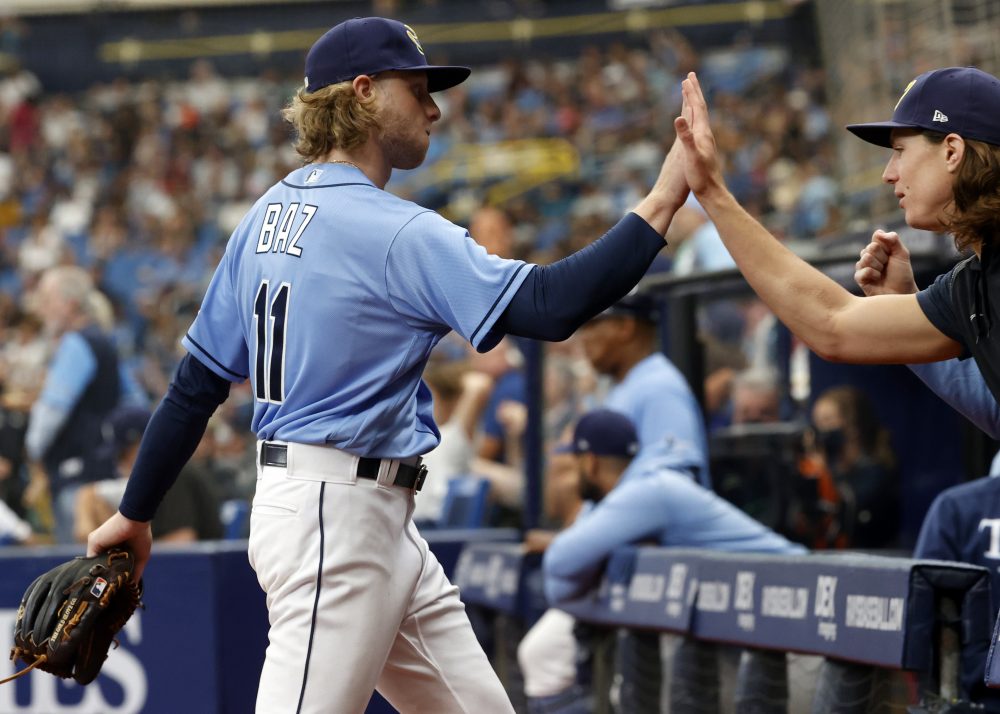 Shane Baz $30 (Maximum Bid: $148. Minimum Bid: $1)
This is a fun way to start my last FAAB column of the season. I was skeptical that the Rays would elect to call up Baz in 2021, but here he is, with his filthy slider generating noises out of my mouth that caused great concern among my wife and children and made them rush downstairs to make sure I wasn’t suffering through some sort of major medical event. He was dominant in his first two major-league starts and is scheduled to close out his season in New York against the Yankees. The only drawback: He is on a tight pitch count and might not be the ideal arm to chase if wins are your primary goal.

Miles Mikolas $30 ($59, $1)
Because of his minuscule strikeout rate, Mikolas is a mostly NL-only arm who can be used in mixed either for very strong matchups or when he draws a two-start week. This is one of those two-start weeks, as Mikolas gets the Brewers and Cubs at home. No pitcher is safe, but Mikolas has avoided any blowups this season, allowing no more than four earned runs in any of his eight starts.

Nick Gordon $22 ($125, $1)
Gordon is playing regularly for the Twins, splitting his time between shortstop and (mostly) the corner outfield slots. If you’re in an AL-only and need volume for your other Twins, note that Gordon didn’t play short at all last week. Brent Rooker is the most likely Twin to lose playing time. Gordon is a stolen-base play in all formats, with 10 steals in 197 plate appearances. This, combined with an excellent shot at playing time, make him arguably the best steals play available on the wire.

Jon Lester $14 ($41, $1)
Lester’s somewhat magical September continued last week with two solid outings, and he now has a 3.07 ERA in September with 19 strikeouts in 29 1/3 innings. That low strikeout rate is why I wouldn’t use Lester in his 2021 finale against the Cubs. Although, on the other hand, it looks like the St. Louis Cardinals are never going to lose another game again, so you’re guaranteed a win from Lester if you use him.

Keibert Ruiz $14 ($44, $1)
Ruiz has very quietly been a productive citizen for the Nationals, hitting .310 with two home runs, eight runs and 12 RBI in 63 plate appearances in September. The lack of strikeouts (six percent K rate this month) is what really jumps off the page. The Nationals have the bonus of a series at Coors Field to begin the week.

Chris Bassitt $12 ($43, $1)
I didn’t care at all about Bassitt’s on-the-field results last Thursday. I was just happy to see him back on the mound a little over a month after he got hit in the face with a line drive. He was dominant in an abbreviated outing, striking out four and allowing two baserunners in three innings. He closes out his season tonight in Seattle, barring a miraculous Athletics comeback that puts them into the Wild Card game or into a one-game playoff to get into the Wild Card game. It’s a good matchup, but I don’t know how deep the A’s will let him go.

Alcides Escobar $10 ($28, $1)
A tip of the cap to Escobar, who has posted a viable half season of above-replacement-level play at shortstop at the age of 34 after looking like he was completely washed three years ago with the Royals. For fantasy managers, this pickup is about volume at middle infield and a series at Coors to kick off the week. Escobar is hitting .285, but batting average is virtually impossible to chase or predict. If you are going to chase the category, though, a contact hitter with three games in Colorado is the way to do it.

Alex Cobb $9 ($34, $1)
Cobb is OK to use everywhere except 10-team mixed or shallower. As I noted last week, his home/road splits are extremely home favorable; however, Texas’ offense is bad. Their park is very pitcher-friendly, too, so Cobb should be fine. The only reason I wouldn’t use Cobb in a shallower league is if I was chasing wins, as the Angels offense isn’t very good either.

Lewin Díaz $6 ($18, $1)
With Jesús Aguilar on the IL due to knee inflammation, Díaz is the Marlins’ starting first baseman. He’s a good play if you’re hoping for someone who might sock a bunch of dingers and you don’t care if he hurts your batting average. Díaz is a mistake hitter who can get exposed by a pitcher who knows you can strike him out by getting him to offer outside of zone. The Marlins do have a seven-game schedule this week, although two of those games are part of a seven-inning doubleheader today.

A.J. Pollock $5 ($27, $1)
Pollock is putting together a solid season—though, per usual, he has missed significant chunks of time here and there due to injury. However, absent the stolen bases, Pollock is producing the way he did at his peak level of production with the Diamondbacks in 2014-2015. He is a must-start when he’s healthy and available.

As has been the case down the stretch in AL Tout, starting pitching has been readily available, offense has been much more difficult to come by, and good luck finding a closer via free agency. Morgan has looked great for Cleveland, and I’d probably take him over Bassitt this week because of the likely volume difference.

It took 26 weeks, but I finally went through all my FAAB in LABR, closing out with the two-start Mikolas week and the volume play in Newman.

I’m not going to win either Tout (AL) or LABR (NL). The best shot I have in an industry league is CBS AL, where I’m six points out heading into the final week but have a slim chance due to several close pitching categories. Hopefully, you’ve gotten something useful out of this column this year. Good luck this week!