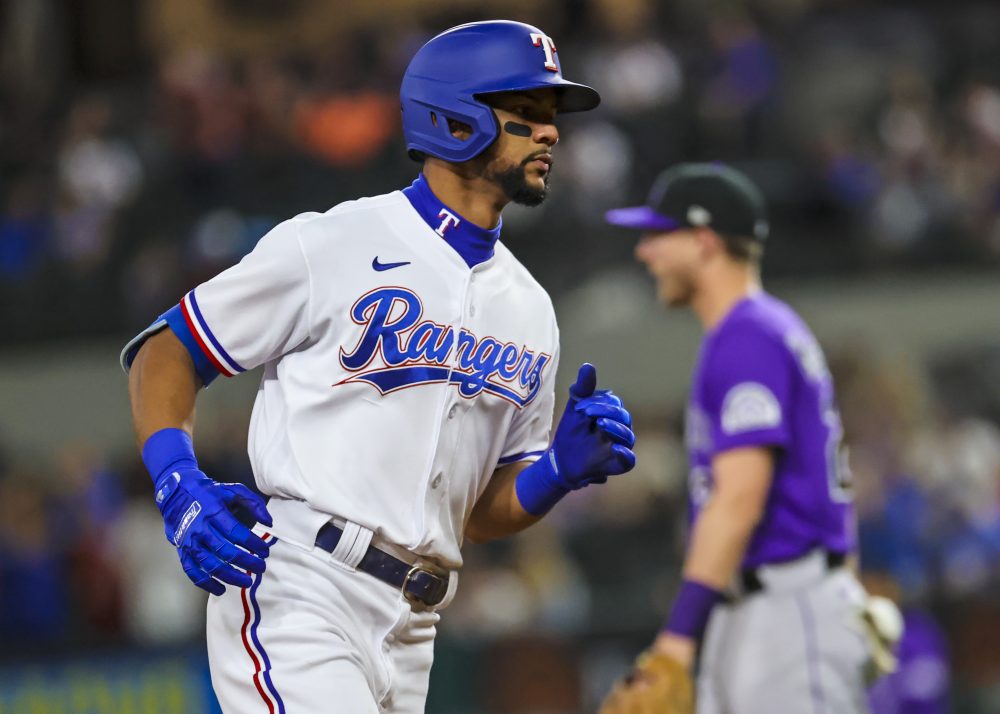 Joe Ryan $17 (Max Bid $56, Min Bid $1)
Acquired from the Rays for Nelson Cruz in July, Ryan didn’t make our organizational Top 10 for the Rays this winter. That, however, says more about the Rays depth than it does about Ryan’s skills. The right-hander dominated the minors in 2019, but there were questions about his future as a starter due to a lack of confidence that his secondary offerings would hold up in the majors. He pitched five solid innings against the Cubs in his major-league debut, but the Cubs did much better against him his second time through the order. Ryan’s matchup at Cleveland is a decent one in deep mixed. I like the strikeout potential in short bursts.

Leody Taveras $17 ($45, $1)
If I had to name just one thing I absolutely loathe about fantasy writing and analysis, it’s the desire to oversimplify, particularly when it comes to small sample sizes and drawing overarching conclusions in April. Maybe that’s two things. Regardless, the race to write off Taveras—a 22-year-old prospect who missed an entire year of minor-league development because of the pandemic—as a flop because of an admittedly horrific April was borderline malfeasance. This isn’t to say that I don’t have concerns about his future or believe that one hot week in early September means Taveras will be great, but the skill set that excited some of us didn’t simply dry up because of 50 April plate appearances either. For redraft leagues only, this remains a boom-or-bust acquisition. Taveras is fast and could steal a bunch of bases this month. He could also kill your batting average. He could even do both! In keeper leagues, Taveras is a player who I’m hoping doesn’t go off this month so that I can grab him cheaply in 2022.

Andrew Kittredge $15 ($61, $1)
There is no empirical way to prove this, but it seems like there is no team in baseball with as much mythology surrounding their process and results as the Tampa Bay Rays. For example, a common misconception is that the Rays don’t employ traditional closers. As a result, folks think that it’s not worth spending much in draft or FAAB capital for their saves. The reality is that while the Rays do tend not to overemphasize the ninth-inning role and are comfortable jettisoning a good reliever like Diego Castillo off the roster if it suits their needs, they also generally stick with one reliever in the ninth over long stretches. Kittredge has emerged as the Rays primary closer and should be rostered in most formats. Although he might not be handed every save opportunity in Tampa, this is more of product of the Rays’ success and the fact that they can’t (and shouldn’t) overwork Kittredge than it is the idea that the Rays hate traditional reliever roles and don’t use certain arms in specific innings or situations.

Lane Thomas $11 ($22, $2)
The Cardinals are developing a reputation for trading older outfield prospects to other teams and watching those outfielders find success in their new digs. This is often seen as a negative, but it likely says as much about the quality and depth of St. Louis’ major- and minor-league outfielders as it does about the Cardinals ability to keep the “right” players. Thomas wasn’t even a Cardinals prospect initially, but rather a Blue Jays farmhand who was traded to St. Louis in 2017 for international bonus slot money. He wasn’t seen as more than a fourth outfielder, at best, by most prospect analysts, so it’s not like anyone else saw something that the Cardinals missed. Thomas was traded to the Nationals at the deadline this year for Jon Lester and has played well for Washington. A modest three home runs and three steals the rest of the way is a possibility, and if you need plate appearances and the potential for contributions across all five categories, Thomas is one of the better players on whom you can gamble in an environment where the free-agent options are thinner than usual.

Carlos Estévez $11 ($27, $1)
I wrote about Estévez last week. More teams scooped him up as it became even more obvious that he is the closer in Colorado. He picked up two saves over the weekend against Atlanta, with Daniel Bard coming into Saturday’s game and struggling in the eighth. Estévez will close, and even though they’re “only” Rockies saves, there aren’t too many formats where you can flat out ignore a full-time closer.

Luke Weaver $8 ($37, $2)
In his return to the Diamondbacks rotation after a three-and-a-half-month absence, Weaver put in a solid performance against the Padres last week. He went six innings, allowing only one run and picking up the win. Weaver has morphed into a two-pitch hurler this year, mostly abandoning his cutter and curve and throwing almost all fastballs and changeups. I like the matchup at home this week against the Rangers, but in leagues with limited reserves or mandatory start requirements, I wouldn’t feel comfortable picking him for more than a low-end bid.

Rowan Wick $8 ($24, $1)
Wick nabbed three saves last week and is clearly the Cubs closer the rest of the way. One caveat: The Cubs faced the Twins and Pirates last week, and their schedule is more difficult the rest of the way. Nineteen of the Cubs remaining 24 games are against opponents with winning records. This doesn’t mean that Wick won’t get any saves (closers on bad teams also save games), but if you have a choice between Kittredge and Wick in your league or lineup, it is something that you should consider.

Glenn Otto $6 ($32, $1)
Like Estévez, Otto is a repeater from last week’s FAAB Review, but I’ll say that the more I see, the more I like. My biggest concern with Otto in redraft formats is that he is on a relatively tight pitch count, which means he isn’t the best pitcher to chase if you’re looking for wins. The Athletics are a tough matchup on paper, although they’re struggling of late and Otto’s rating in mechanical forecasts is likely underestimating the gains that he has made this year with his slider.

Anthony Alford $5 ($15, $1)
Because I write about deep leagues, I find myself writing much more about players on bad teams than those on good ones. There are a few reasons for this, but it is primarily because bad teams often find their lineups in flux. There are more opportunities for unheralded and/or former prospects to emerge. Alford fits this description, as a 27-year-old former Jays farmhand who was nabbed on waivers by the Pirates last month and who has been a power/speed monster ever since. His .272 OBP and 47 percent strikeout rate are both giant red flags, while I can’t say no to Alford any more than I can to Taveras, the speed-hungry teams need to be aware of the risk. Alford is batting at or near the bottom of the lineup, which is also something to watch in terms of stolen-base opportunities.

Bryse Wilson $5 ($15, $1)
Wilson fits the category of an ugly streamer: a pitcher who you’re only rostering this week because he has a two-step at home in a pitchers’ park against two weaker offenses (the Tigers and Nationals). The Pirates inability to win games and Wilson’s inability to strike out batters are two reasons to dampen your already modest expectations. However, if you’re simply looking for volume and hoping that Wilson can strike out eight batters and maybe steal a win, there are worse plays you can make this week. Wilson’s first start last night against the Tigers—six innings, eight baserunners, four strikeouts, three earned runs, and a no decision—was about right.

The revised rules surrounding September call-ups in Major League Baseball have changed the game in -only fantasy leagues, where there used to be much more jockeying for players and by extension playing time. Kowar leads a somewhat uninspiring group of starting pitchers who were added in Tout AL. I like Kowar a great deal in the long term, but the results weren’t great last week. I worry that the Royals will trot him out there even if he doesn’t deliver. Bieber is a great pickup if he can get into action before the season ends, but he’s running out of time.

The hitting pickups were a little more interesting, although if you’re counting on Sheets or Marmolejos, than you know you’re in an AL-only. I bid $0 on Castro and wound up settling for Araúz to fill in one of my never-ending holes on offense. I also decided to roll with 10 pitchers this week.

I barely missed out on Wick. Otherwise, I stood pat in a year where I’m going to finish anywhere between second and fourth. It was a good season in some ways, but I’m sure that I’ll be unnecessarily harsh on myself, as I always am in my postseason recaps.

You need to be logged in to comment. Login or Subscribe
Jon Crate
You've mirrored my thoughts on Taveras. If I can get into a league or get my own started next season he is definitely someone I'm hoping to get super cheap. Here's hoping he's only average this month. Alford was a guy I loved in the minors for years but just couldn't stay healthy enough to get game reps. I'm hoping he can continue to be successful.
Reply to Jon