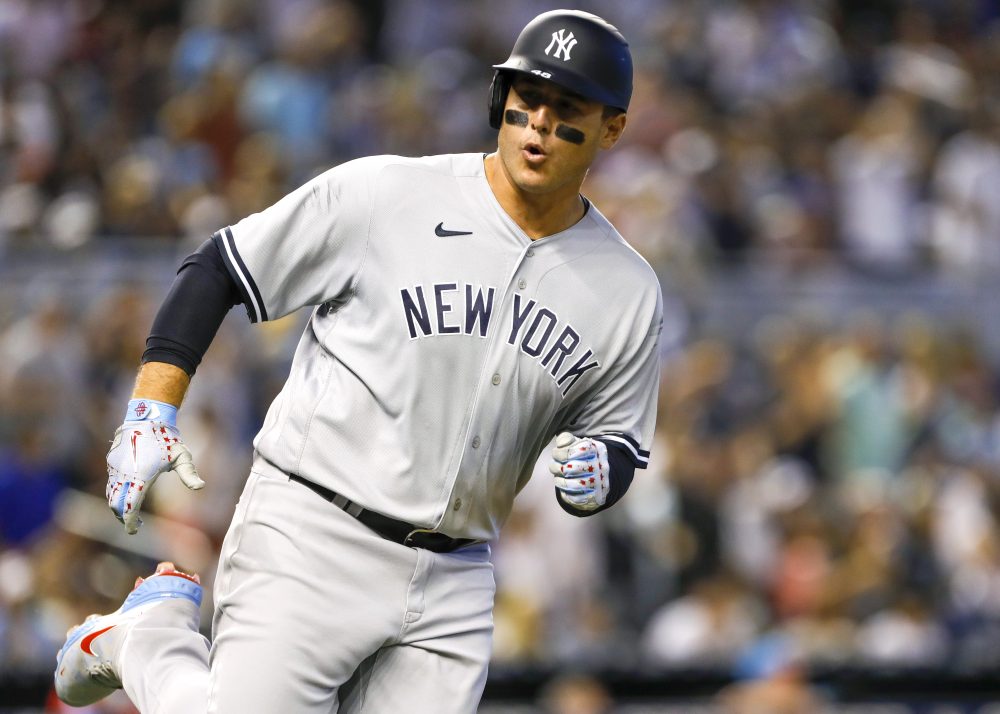 Kyle Finnegan $69 ($201, $13)
I cannot recall a year when so many closer roles changed because of swaps at the trade deadline. The result was a closer-heavy week in FAAB bidding. Finnegan was the TGFBI headliner, easily pulling in the most bids and the highest average bid. He’s not the most talented reliever among the new closers, but he picked up two saves last week and his role is far clearer than it is for many of the purported closers on other teams. I bid $20 in my TGFBI but came up short. I have no doubts about the role, but the K/BB rate gives me pause. Plus, while the results in July were terrific, his strikeouts were down. I can’t tell if Finnegan has figured something out or if he just had a strong month, and I wasn’t going to bid more than $20 to find out that it’s just sample-size noise.

Abraham Toro $30 ($67, $2)
Toro was probably cut in a few leagues once Alex Bregman started his rehab assignment, but Toro’s trade to the Mariners opens playing time once again for the 24-year-old infielder. With Kyle Seager entrenched at the hot corner, Toro will get most of his reps at second base for Seattle. Multi-positional eligibility will boost Toro’s value, but even without it, he was already moving up the charts thanks to better-than-expected performance. Toro could be a player who hits 20-25 home run and steals 10-15 bases in the long term, and even if the batting average is nothing special, that’s playable in standard mixed leagues.

Edward Olivares $28 ($118, $1)
I could paste my comment about Olivares from eight weeks ago here and it wouldn’t make much of a difference. With Jorge Soler traded to Atlanta, Olivares should have a clean path to playing time and a chance to deliver on his power/speed promise that gets so many of us in the fantasy community all hot and bothered. He’s listed on the Royals depth chart on the weak side of a platoon with Jarrod Dyson, but Olivares should be the everyday starter in right field.

Rafael Ortega $27 ($111, $2)
There is a perception that Ortega’s opportunity to play came because of the Cubs massive deadline sell-off, but he was already getting mostly regular reps in the outfield thanks to the struggles of Ian Happ. Ortega is a 30-year-old minor-league journeyman who was known for his wheels in the early 2010’s as a Rockies prospect who never panned out and had only seen limited time in the majors as a reserve until this season. He unlocked some power in the minors in 2019 in Atlanta’s system and got everyone’s attention when he hit three home runs on Sunday against the Nationals. Your guess is as good as mine as to whether this is a legitimate breakthrough or if regular at-bats will expose Ortega, but it’s worth a $20-25 bid to find out if this great story can continue.

Tyler Clippard $22 ($66, $3)
Joakim Soria’s trade to Toronto put Clippard into the driver’s seat for saves in Arizona, mostly because the Diamondbacks don’t have many other options. Clippard doesn’t throw hard and works off his changeup to trick hitters with an upper-80s fastball and a splitter that comes in at about the same velocity as the change. He is not spectacular but is effective—although, as an extreme fly-ball pitcher, the non-dominant stuff can lead to some rough outings when it’s not clicking. Clippard is a better option than many of the other relievers who were acquired this week, simply because he has the job by default. I got him for $10 in my TGFBI.

Spencer Patton $16 ($42, $3)
I use the term journeyman too often in this space, but Patton fits this description. A former Royals/Rangers/Cubs prospect, Patton washed out and went over to Japan in 2017. He didn’t come back until this winter and wisely picked a team in Texas with an unsettled bullpen to ply his trade. There is some belief that Patton is the definitive closer for the Rangers, although the only evidence we have is a blown save on Saturday. While the Rangers could simply stick with Patton the rest of the way, it could also be a committee. Demarcus Evans is the name that I’d stash if you’re in a keeper league. Saves speculation at these low, low prices is fine.

Dylan Floro $15 ($71, $1)
The Yimi García trade means that Floro could be the closer. Or it could be Anthony Bender. Or Anthony Bass. Or Richard Bleier. On merit, Floro deserves the job, but that and three dollars can buy you a cup of coffee, as my dad used to say. Floro is solid and will be fine if he does seize the job, although the strikeouts won’t be there as part of the package.

Kyle Farmer $12 ($44, $1)
I’ll admit it: I derisively sneered when Farmer went for $1 in LABR NL this season, as I didn’t think much of Farmer and figured that he’d mostly be on the bench or in the minors for the Reds. I was wrong. Farmer has been a solid citizen who could easily finish with 15-20 home runs and a .250-.260 batting average. He’s been on fire of late, with a .426 batting average and three home runs in 61 at-bats since the All-Star Break ended. He should cool off, but this is a case where you should ride the hot hand and see how it plays out.

Cole Sulser $10 ($33, $1)
I hate victory laps and am not about to take one for a Baltimore closer, but I was more than a little surprised that I was the lone bidder on Sulser two weeks ago in Tout Wars AL. While it’s easy to dismiss Sulser because of his team and role, he’s been better than we expected this season. An improved K/BB rate and a 3.68 DRA suggests that the results are somewhat sustainable. Sulser nabbed back-to-back saves on Friday and Saturday, and while Dillon Tate has also been in the mix, the job looks like it belongs to Sulser.

Tyrone Taylor $9 ($30, $1)
Milwaukee’s outfield is crowded, but Taylor’s hot hitting has forced their hand. He’s playing every day in left field while Jackie Bradley, Jr., Lorenzo Cain, and Avisaíl García all rotate into the other two outfield slots. The fly in the ointment is Christian Yelich, who is on the COVID-19 IL and will make a crowded outfield even more so when he returns. Taylor’s power/speed combo makes him a must-add when he is playing. I like him better than Ortega at least as a one-week/short-term addition.

During most weeks, free-agent movement can be as boring as watching paint dry in mono leagues. The exception is after the major-league trade deadline, when there are plenty of players on whom to bid in some years. That’s how it went in the AL, where Marte and Rizzo were the big, obvious plays, but there were some decent consolation prizes for fantasy managers who didn’t have enough coin for either.

I was fourth overall in FAAB and wound up with Kimbrel. I was listening to a podcast on my Monday morning run that was knocking my move because Liam Hendriks should get most of the saves for the White Sox. While I agree with this assessment, Kimbrel will get a few saves, and given the instability of the role on most teams, a few saves from Kimbrel will be valuable. Even among seasoned analysts, there is a lack of understanding about how valuable an elite non-closer can be for a fantasy team. It wouldn’t surprise me if Kimbrel produces more fantasy earnings than any of the players acquired this week in AL-only, if he can keep his ratios where they have been all season long. Three or four wins down the stretch wouldn’t hurt his cause either.

I thought about prioritizing Schwarber or Hand instead, but Schwarber’s injury and the presence of Jordan Romano gave me pause on both counts. I wasn’t alone. The bidding on both players wasn’t nearly as robust as it was on Kimbrel, and while Hand could work out wonderfully, I wouldn’t be surprised if it’s a true job split in Toronto.

I also nabbed Harrison. He’s supposed to be the Athletics super-utility player, but he could push Mitch Moreland to a bench role.

The NL was less straightforward than the AL, although part of this is because you aren’t allowed to bid on injured players and must wait for them to return off the IL. This meant that Eddie Rosario and Danny Duffy weren’t available via FAAB this week. But the other reason that things were less cut and dried is simply because the AL-to-NL movement wasn’t nearly as bountiful.

Soler could be an impact player down the stretch. He has been swinging a hot bat, and maybe he rides that streak all the way into late September for Atlanta. But there is also the possibility that he cools off again and hits for a sub-.200 AVG with not enough power to justify the category hit. Gibson was great with Texas, but he has been slumping in the last month, with a 5.46 ERA in his last six starts that’s fueled in part by a walk rate that’s over five per nine innings in that span. He moves from a very good pitchers’ park to a bad one, which somewhat tamps down the AL-to-NL advantage. Then, there was Kennedy, who will close for the Phillies, and Happ, who drew a surprisingly high $29 bid.

I bid $12 on Carrasco and $11 on Soler, knowing that I wouldn’t get either. I only had $12 left to spend and was last in FAAB entering the week. I suspect not everyone knew Carrasco was a free agent, which explains the lack of bidders. Yes, there is some risk, but more than four teams should have bid. Speaking of lack of bidders, one LABR NL team didn’t put any FAAB bids in this week. That’s a head scratcher for sure.

My other bids were $5 apiece on Kennedy, Finnegan and Clippard, in that order. I came really close on Clippard and wouldn’t have been disappointed to add a third closer to Will Smith and Daniel Bard. It would have been a luxury, though.