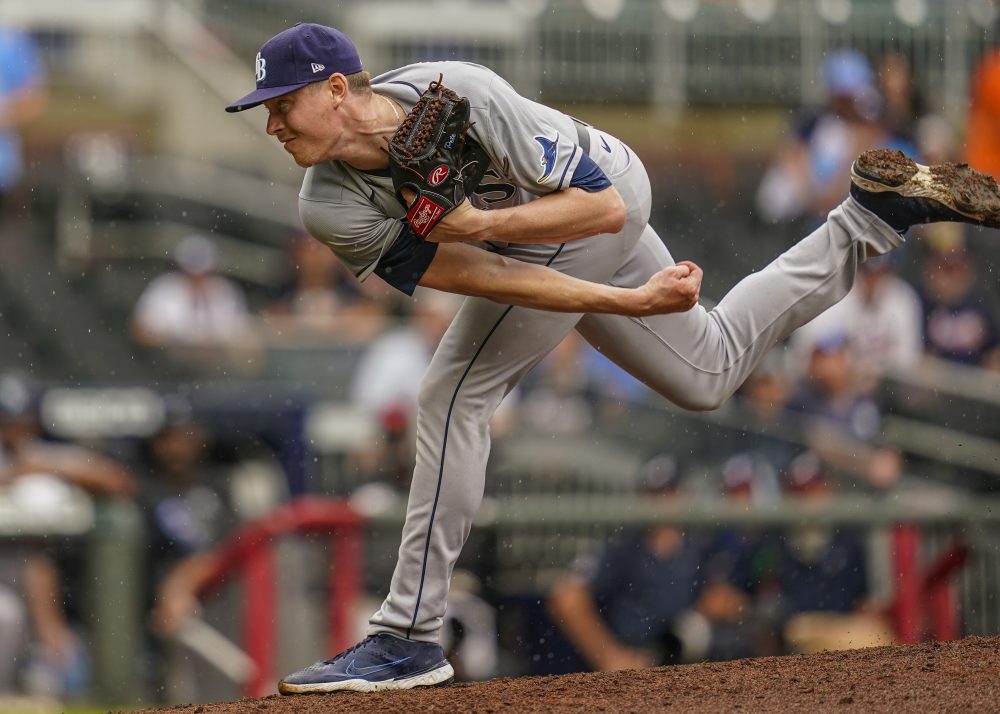 Jarren Duran $176 ($399, $37)
Duran wasn’t available in my TGFBI bracket. He was drafted in the 28th round and has been stashed by his fantasy manager on reserve all season long. That takes dedication, particularly because until recently it seemed like the Red Sox were going to let Duran play in the Olympics, which would have taken him out of consideration until August. The Red Sox decided that they needed him too badly to wait and called him up to the big-league club this past weekend. There isn’t much I can tell you about Duran that you don’t already know. He is a must-add in every format because of his power/speed combo, and while he could struggle initially against big-league pitching, the power improvement in the minors is legitimate. Duran could easily be a 10/10 hitter the rest of the way. The bids here make sense. I easily would have bid $200-250 had Duran been available.

Madison Bumgarner $17 ($37, $1)
It has been an up-and-down year for the veteran southpaw. Bumgarner came out of the gate with three lousy outings, had a six-start run from April 18 through May 17 where he looked like the Bum of old, and then struggled once again before landing on the IL with shoulder inflammation. He returned triumphantly on Friday, with a six-inning win against the Cubs. Bum’s 2020 appears to be an aberration, but he isn’t close to the pitcher that he was during his peak with the Giants either. What you can expect is a solid, back-end starter in deeper mixed leagues, but that description will come with some clunkers, which makes him a matchup play. He’s a go for me this week in 15-team mixed against the Pirates.

Paul Sewald $10 ($21, $3)
Since I wrote about Sewald last week, he picked up another save on Friday against the Angels. In that same game, co-closer Kendall Graveman was called on ahead of Sewald to start the ninth with a four-run lead and, like Cliff Clavin in the 1980s sitcom Cheers didn’t deliver, creating the save opportunity for Sewald. I haven’t known what to make of the Mariners bullpen all year, so I’d tread cautiously with any of the relievers in this pen. However, with a low-level bid like this, there’s no harm in making the speculative grab.

Oscar Mercado $10 ($18, $4)
I was one of the winning bidders for Mercado’s stat line, putting $17 on the Cleveland outfielder. Like Sewald, Mercado is another repeater from last week, so there isn’t much to add. In my case, I went from being flush in outfielders to shorthanded, thanks to multiple injuries during the short week immediately after the All-Star Break. Mercado is battling Harold Ramírez and Daniel Johnson for playing time but had the best chance among the trio of breaking out, particularly from a fantasy perspective thanks to his modest power/speed combo.

Tanner Houck $9 ($22, $3)
The Red Sox have indicated that they want to try and keep their starters fresh and healthy for a potential playoff run, so they will be using a six-starter rotation, at least in the short-term. Houck’s first major-league outing post-All Star was out of the bullpen, but the plan is to use him as that sixth starter. The scouting reports have always seen him as either a capable fifth starter or a valuable bullpen piece and have noted that Houck will succeed or fail based on his ability to throw a third pitch, a splitter that is a relatively recent addition to his arsenal. I’d like him better if the Red Sox weren’t in the AL East and didn’t have so many divisional games remaining on the schedule. He will face the Blue Jays on the road this week, a matchup I’d avoid in anything but AL-only.

John Nogowski $8 ($16, $1)
From (grabs my book of outdated baseball terms) Moneyball to Cardinal Devil Magic to (throws book into the fireplace) the Pittsburgh Pirates, Nogowski is a well-traveled athlete who didn’t get his first real chance in the majors until now, as a 28-year-old journeyman with the Pirates. Nogowski’s calling card as a prospect was terrific plate discipline, and in a different era a 15-homer, .270 AVG first baseman with good walk rates could probably thrive for years as a second-division regular. However, the Pirates are one of the few teams where he can probably start in the short-term. For fantasy, Nogowski is an even more difficult sell in non-OBP leagues. I hope he succeeds, as homogeneity in any sport is boring, but I wouldn’t bet my Willie Stargell jersey on it.

Wily Peralta $6 ($22, $1)
In cases like Peralta’s, I hate falling back on the “it’s a small sample” mantra. It feels lazy, leads to shoddy or non-existent analysis, and gives an easy out that frees everyone from digging into the numbers or diving deep to see what gives. But in Peralta’s case, I did the digging and don’t see him doing anything fundamentally different that would explain his recent renaissance. Yes, his command is better, but that shouldn’t be leading to a .187 BABIP and a 1.64 ERA. He does have the advantage of pitching in the AL Central and the matchups have been tasty, but even with the Royals on the slate this week, I’d stay away from Peralta in mixed.

David Bednar $5 ($19, $1)
Bednar is the logical replacement to Richard Rodríguez in Pittsburgh if the latter gets traded to a contender at the deadline. Bednar has been a competent reliever all season long, but his numbers don’t suggest an elite closer if he does get the job in August. That’s OK. Not every closer needs to be elite, and with a $5 average FAAB bid out of $1000 budget, this will be like found money if this scenario comes to fruition.

Pete Fairbanks $4 ($13, $1)
Fairbanks saved two games over the weekend for the Rays (if you include Friday night as part of your weekend), with Diego Castillo not seeing any action. At the very least it looks like a job share in Tampa, but it’s also possible that Fairbanks runs with the job. The control has been shaky over the last two seasons. Otherwise, he has been a near-elite reliever when healthy.

Ben Gamel $4 ($11, $1)
Gamel is on a nice run, with a .311/.408/.607 slash line in his last 71 plate appearances and five home runs, 13 runs, and 10 RBI during that span. Gamel’s career line is more indicative of what to expect going forward, and the lack of power is what would keep me from getting excited about Gamel the rest of the way. Feel free to ride the hot hand, particularly since Gamel is batting fourth and playing every day for Pittsburgh, but this is most likely a placeholder for an injured player or a short-term pickup, not a long-term solution in your fantasy outfield.

Marsh was the obvious play for a few Tout AL competitors, and Jeff Erickson of Rotowire was by far the most aggressive bidder, nabbing the Angels prospect for $215. The risk is that Mike Trout returns soon and that Marsh goes back to the minors, but there are enough holes on the Angels and enough fire in Marsh’s bat that I assume he’ll stick if he performs.

I bid $27 on Sulser to try and add some saves to a team that has fared poorly in the category. I don’t have a good feeling for what Baltimore’s bullpen will look like for the rest of the season, but the price is low enough that I can drop Sulser quickly if the Orioles go with someone else and break away from the committee.

You can’t bid on players on the IL or in the minors, but a couple of my competitors forgot, bidding $7 on Carlos Carrasco and $3 on Josiah Gray. Those bids were invalidated, and the money was returned to their FAAB coffers.

I bid $1 on Reddick and didn’t come close to getting him. I like Reddick, but even on a depleted Diamondbacks team, I’m not sure about his playing time. I got De Jong and Toussaint at a $1 each to try and fill the hole that Jacob deGrom’s latest IL stint has created with innings. It will most likely lead to disappointment and sadness.