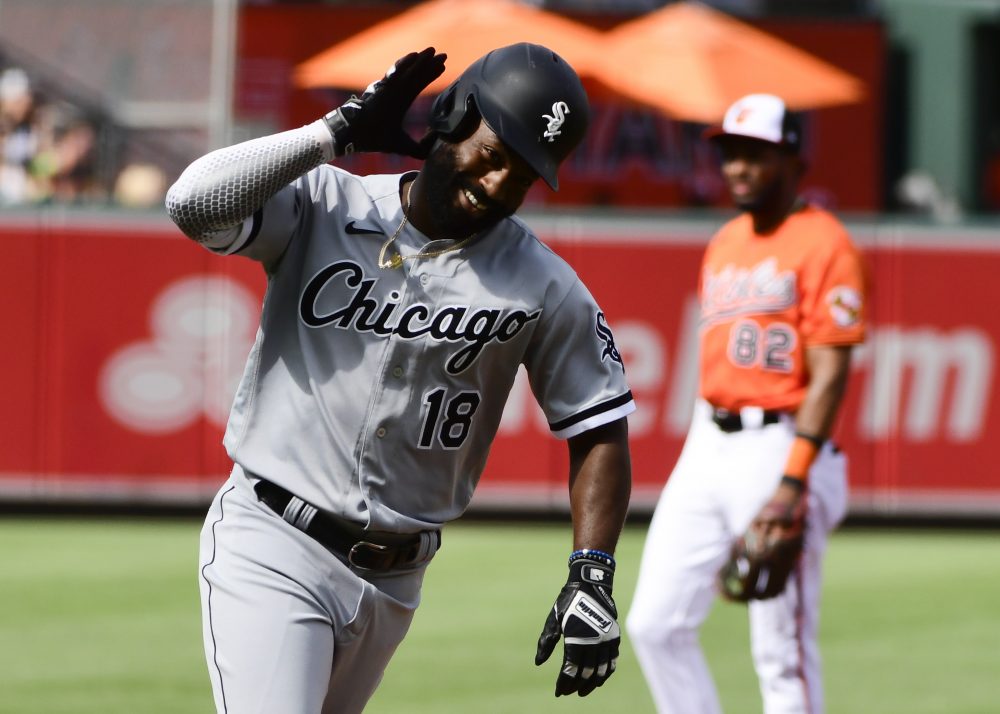 Vidal Bruján $101 ($320, $11)
It is difficult to say if Bruján’s relative power breakout in Triple-A will translate to the majors, or if the batting average will bounce back to where it was in the minors pre-2021, or in general what the offensive profile will look like. But even if the rookie version of Bruján fulfills his worst-case scenario, the reason to pounce in nearly every format is his game-changing speed. He’s fast, and the Rays aren’t afraid to run, relative to 2021’s context at least. Playing time is always a concern with nearly every Rays player, but even if he only plays 70 percent of the time, Bruján is likely to be better than the third middle infielder you’re currently carrying in most Roto formats. I bid $94 and lost out in my TGFBI bracket, but my bid would have been more aggressive if I were carrying a weaker third middle infielder.

Ranger Suárez $37 ($81, $1)
When I saw Suárez’s name pop up this week, my mind jumped to the 1980’s band Night Ranger and the song “Sister Christian” popped into my head. Now it’s in your head, too. Sorry about that. Suárez picked up a 45-pitch save on Sunday against the Red Sox and is the Phillies closer mostly because the rest of the Phillies bullpen is bad and manager Joe Girardi doesn’t trust anyone else. Suárez is OK, but a .159 BABIP against won’t last. Plus, if the Phillies hang on in the NL East (amazingly enough, they’re 3.5 games out of first at the break), I’d expect them to trade for reinforcements before the month is out.

Heath Hembree $34 ($118, $3)
Two weeks in ago in this space, I was writing about Amir Garrett and Brad Brach and wondering whether the modest bids on either reliever would work out. It turns out that the answer was no. Womp womp. Since July 2, Hembree has run with the job in Cincinnati, saving five games and only missing opportunities the last two Sundays because he needed a breather. The 32-year-old reliever had two career saves entering the 2021 season, but that’s about as relevant as knowing what Hembree’s favorite foods are. He’s throwing harder than he has since 2017 and striking out a hell of a lot of batters. The job looks like his, and this looks like a great bargain if he has indeed secured the role.

Tylor Megill $32 ($98, $4)
Megill is a repeat customer, so you can go back and read what I wrote about him last week if, like me, you forgot what I wrote. He showed off both the good (dominant stuff, lots of strikeouts) and the bad (control/command issues, got chased early) against a Pirates offense that came to life like Frankenstein’s monster against the Mets. Megill is great as a strikeout play. Everything else is a grab bag with him.

Anthony Bender $15 ($43, $1)
Yimi García is potentially on the trading block for the perpetually rebuilding Marlins, but even if he weren’t, Bender would be worth stashing as a possible replacement. The 26-year-old right-hander was cut loose by the Brewers in 2019, pitched in independent ball for the Milwaukee Milkmen in 2019-2020, and came to camp this spring with increased fastball velocity to add to his already solid slider. There are no guarantees that Bender secures the role or that García even loses it, but for a $15 throw this is an acceptable risk.

Oscar Mercado $14 ($44, $2)
Mercado is a good example of the phenomenon where the fantasy community overrates a modest prospect upon his call up and early success, and then is too quick to throw the failure label on him when he inevitably struggles. Mercado won’t carry your fantasy team on his back, but he offers modest power and decent stolen-base potential. He’s not worth adding in standard mixed leagues, but in deeper formats like TGFBI, having a fifth outfielder who can potentially post a 15/15 line is nothing to casually dismiss. It helps that Cleveland’s outfield has struggled all season, as it won’t take much for Mercado to run with the job if his batting average doesn’t completely crash.

Paul Sewald $14 ($51, $1)
Even though Sewald has two of the Mariners’ last three saves, I doubt that he’s the new closer in Seattle. But the Mariners have eschewed the idea of a traditional closer this season, as no reliever in their bullpen has successfully converted three consecutive save opportunities (Kendall Graveman is the only one to covert two, turning the trick twice). But Sewald is a particularly good reliever, and in deeper leagues he’s a better option than a sixth or seventh starting pitcher with bad ratios and low strikeout totals. We’re also getting close to the portion of the season where you might have categories like wins and strikeouts in hand, or at least are in a good place in those categories and can ride Sewald for a couple of weeks in the hopes of some saves with those great ratios.

Brian Goodwin $11 ($34, $1)
Since June 12, the day he made his 2021 debut with the White Sox, Goodwin is 15th among qualified outfielders in OPS, posting a solid .267/.353/.511 line. His counting stats are solid across the board with four home runs, 17 runs and 15 RBI in 103 plate appearances. Goodwin isn’t the type of outfielder who you’re ever targeting in a fantasy league, but for both the White Sox and our imaginary teams, he’s a decent fill-in until your injured players return to action.

Kole Calhoun $10 ($33, $1)
Calhoun came off the IL on Saturday and should resume his role as an everyday outfielder for the Diamondbacks in the second half. He has morphed into a high-power/low-average hitter since 2019, and while he hasn’t done that in 2021, we only have a 55 plate appearance sample to go on due to multiple injuries. Calhoun is a free agent at the end of the season (Arizona does have a $9 million option for 2022) and could be a trade target at the end of the month. This is an excellent low-end gamble on a player who could provide OF3 production if everything goes his way and can be easily tossed aside on waivers if he doesn’t.

Zack Collins $5 ($15, $2)
A torn tendon in Yasmani Grandal’s knee will keep him out of action for at least a month, with September being a more realistic timeframe for the veteran backstop’s return. Collins and Seby Zavala are slated to split time behind the dish for the White Sox while Grandal recovers. If sticks as a job split, both catchers are better left in the free-agent pool in anything outside of AL-only. Collins is the superior hitter, but it’s not enough of an advantage worth rostering him if he only gets 3-4 starts a week.

Tout Wars pushed all their FAAB bidding to Wednesday because of the All-Star Game and the short week. This is a wonderful idea that more leagues should follow. It also gives me more time to watch the Home Run De—HOLY MOLEY DID YOU SEE THAT BLAST?!?

I thought that I had bid $6 on Tellez, but for some reason my bid didn’t go through. It was moot in any event, as Derek Van Riper of The Athletic bid an aggressive $12 to add the former Blue Jay and current Brewer to his squad. Tellez has a good chance to stick on the good side of a first-base platoon with Keston Hiura and should be a decent power play, albeit with a low batting average.

Nogowski and Castro are solid flyers in NL-only. Players on bad teams like the Pirates are often bad adds in mixed because their RBI and runs totals are suppressed. In NL-only, volume plays, always.