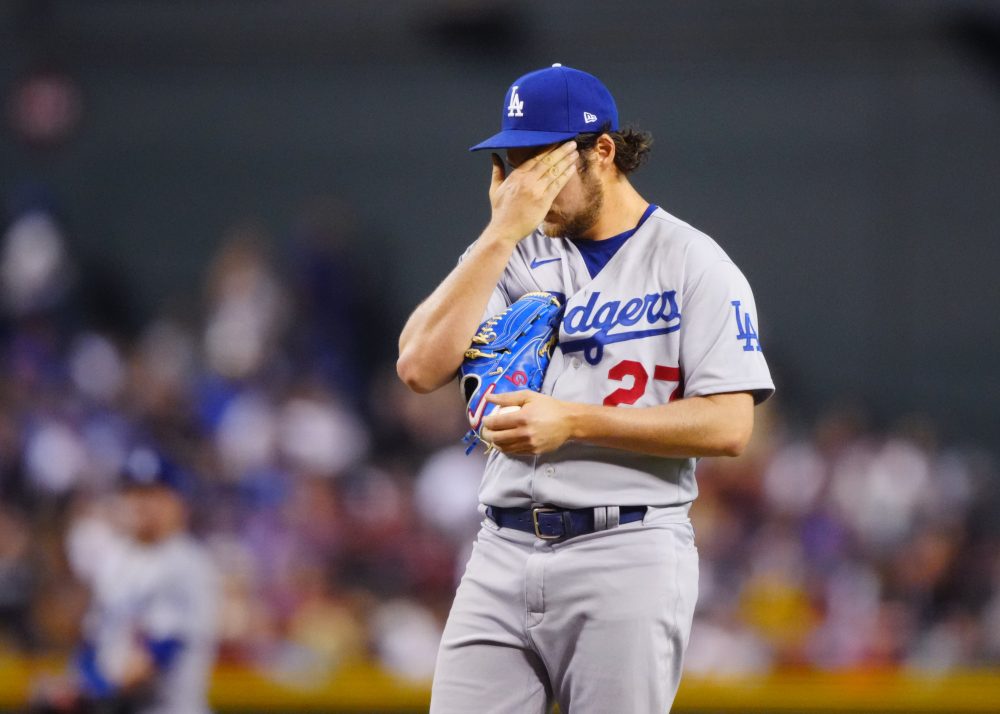 In the WERF (Western Expanse Roto Fantasy) League, one of several, regionally-based leagues of fantasy writers and fantasy-writer-adjacent players, I have Trevor Bauer on my roster. When news of the restraining order obtained by a woman against Bauer broke last week, which was later amplified by Britt Ghiroli’s and Katie Strang’s reporting of Bauer’s alleged physical and sexual assault of the woman, I asked the commissioner of the league if I could immediately bench Bauer in our league, despite the lineup being locked for the week. (At this point, Bauer was still scheduled to start on Sunday but was later put on administrative leave by MLB.)

After the WERF commissioner agreed (thanks, JT) and league members supported the decision, Bauer immediately went to my bench. He will remain there in perpetuity. I will not cut Bauer while he remains on the Dodgers active roster. My “rational” reason for this decision is so that he won’t be picked up by another team and potentially upset the balance of the league. My irrational reason is that I feel like I need to pay some kind of penance for rostering a player who is a misogynist, transphobe, and based on compelling evidence, someone who has sexually assaulted a woman.

To be clear: I do not write about this in the spirit of fantasy “advice.” You will not read any “you should” comments in this piece. I simply want to come to terms with the morally murky enterprise of rostering players in fantasy who have done terrible, violent things. I want to explain why, to me, Bauer stands out among a depressingly large number of players—Marcell Ozuna, Roberto Osuna, Sam Dyson, Addison Russell, Aroldis Chapman, Domingo Germán, and Odúbel Herrera among them—who have been investigated and suspended by Major League Baseball (though, tellingly, never prosecuted in a court of law) under MLB and the Players’ Association’s Joint Domestic Violence Policy.

I refer you to Craig Goldstein’s piece, which covers the cowardice and ethical failure of the Dodgers organization in their handling of Bauer’s restraining order and the subsequent evidence that has come to light. It should not need emphasizing that fantasy baseball is among the most insignificant concerns next to the physical injuries and sexual assault suffered by the woman who has been granted a restraining order against the Dodger pitcher. But there will be questions by fantasy players. There will be decisions to be made about rostering, benching, dropping, or trading for the Dodger pitcher, if and when he is reinstated by the league.

Fantasy baseball has always existed in a morally uncertain realm. From the time Dan Okrent and others invented the game in the early 1980s at the La Rotisserie restaurant in Manhattan, the DNA of fantasy baseball has depersonalized baseball players. Their shape, their size, their looks, their habits, their countries of origin, their personal stories—all of these are ancillary to the numbers generated by their on-field performance. Indeed, one of the cliches of the fantasy-advice industry is that you are not drafting players—flesh-and-blood human beings—but merely statistics, numbers, figures in a box score.

Because of this quantification of human baseball players, fantasy baseball engages in a kind of morality laundering. Just as money laundering “cleans” ill-gotten wealth by transferring it to “legitimate” enterprises and institutions, thereby making it easy to forget its morally objectionable sources, so too does the statistical flattening of baseball players allow fantasy managers to overlook and ignore even the worst, most despicable qualities of the players they roster. Run through the cleansing wash of statistics, players—whether at their personal best or worst—are abstractions.

I am not here to criticize this feature of fantasy baseball, only to point it out. Do I think that fantasy baseball contributes to larger trends that dehumanize players and hold up data analysis and game theory as somehow on a different moral plane than the human lives of players? Yes, yet I still engage in the pastime. For now.

And it’s important to say: I’m not innocent of this. I’m not taking some moral high ground. At times I have let the intensity of “expert” and other competitive leagues lead me to tamp down moral objections to rostering certain players. I, too, have let my misgivings be cleaned, dried, folded and pressed in the sterile laundromat of numbers.

But, going forward, Trevor Bauer will neither contribute to any of my teams nor be a subject of any of my fantasy writing.

While any number of players have committed horrific, violent acts, Bauer’s context is a little different. He, more than Ozuna, or Osuna, or Chapman, or Herrera, is an icon to both fans and those inside the game. He has nearly half a million Twitter followers. He vlogs regularly, posting videos to a YouTube channel with nearly as many subscribers as his Twitter feed. He is prominently featured in Ben Lindbergh’s and Travis Sawchik’s The MVP Machine, where he is described as an innovative “nonconformist.” He is a regular focus of Rob Friedman’s wildly popular PitchingNinja feed.

When Bauer receives criticism via Twitter, there are legions of (predominantly white and male) supporters who embrace his mantle as a rebel, a genius, or (in one of the most detestable terms in the current biz-tech-marketing universe) a disruptor. Fans have overlooked—or worse, have endorsed—his targeted harassment of women on Twitter. The Dodgers took a look at his detestable online behavior and, rather than walk away, offered him a three-year, $102 million contract.

The least comfortable thing for me, a long-time fantasy player and current fantasy writer, is that the values for which Bauer is celebrated are the same ones that are valued in fantasy and real-life baseball: adopting advanced data analytics, employing new methods of training, and questioning long-held baseball customs. In a vacuum, none of these are bad things. But Bauer and his supporters elevate them to the level of a moral crusade, writing off his despicable behavior as a necessary feature of his subversive persona.

MLB can pathologize the violent behavior of many of its players (who often happen to be players of color). It can all-too-easily paint Ozuna, Chapman, and their ilk as bad apples who do not stand for the “values of the game.” It is not as easy to dismiss Bauer. In many ways, he is the standard-bearer for a number of baseball’s current values.

For me, to use Bauer in fantasy—even in the most detached, morally laundered way—is to endorse a version of baseball that tolerates Bauer the misogynist to elevate Bauer the baseball player.

That brings me to my title. Faced with the prospect of employing Bauer on my fantasy roster, it’s very easy for me to follow the lead of Herman Melville’s intractable character Bartleby, a scrivener of 19th-century New York. When asked to do any task that is unpleasant to him, for whatever reason, he gives the same cryptic rejoinder: “I would prefer not to.” He does not explain; he does not justify. He simply asserts his own agency in an increasingly quantified, industrialized, mechanized world by opting out.

You might be thinking: Sure, Jon, you can make your own personal decisions as a fantasy player, but you owe it to your readers to continue to analyze Bauer, and every objectionable baseball player, just as before, divorcing their off-field offenses from their on-field statistical output.

I would say that fantasy baseball analysis is not a sacred enterprise. I took no orders to join a priesthood. I did not place my hand on a holy book, vowing with my heart and soul to provide dispassionate, even-handed analysis to every single player, regardless of what that player may have said or done, regardless of what harm that player has caused to another human being.

If there comes a point when I no longer feel that I can launder my moral objections in statistics about a certain player, to give that player the privilege of separating what he does off the field from what he does on it, then I will not write about that player. I will not write about Trevor Bauer, if and when he resumes playing. I will include him in the list of two-start pitchers as needed, but I will not spend time or words thinking about or analyzing him.

You don’t have to agree with this; that’s fine. You can find other writers who will continue to treat Bauer’s violence as some weird, external circumstance that only matters in terms of playing time, or whether you should “buy” or “sell.” Were I employed full-time by a media outlet to write about fantasy, I would have a more difficult decision to make. But I’m not. And the editors here at BP have explicitly given us support should we wish to avoid talking or writing about Bauer.

I am taking Craig and J.P. up on the offer. I would prefer not to consider Trevor Bauer in any fantasy circumstance, and so, like Bartleby, I will opt out. I’m not saying you should do the same, but know that you absolutely can.

You need to be logged in to comment. Login or Subscribe
Ryan Pitman
Yes to everything, but it feels disingenuous to say Bauer is a bigger star than nine-time all star Aroldis Chapman.
Reply to Ryan
robertb
As you wrote, we don’t have to agree with you but also we can, and I do! Thanks for sharing your perspective.
Reply to robertb
Mike Gianella
Excellent piece.
Reply to Mike