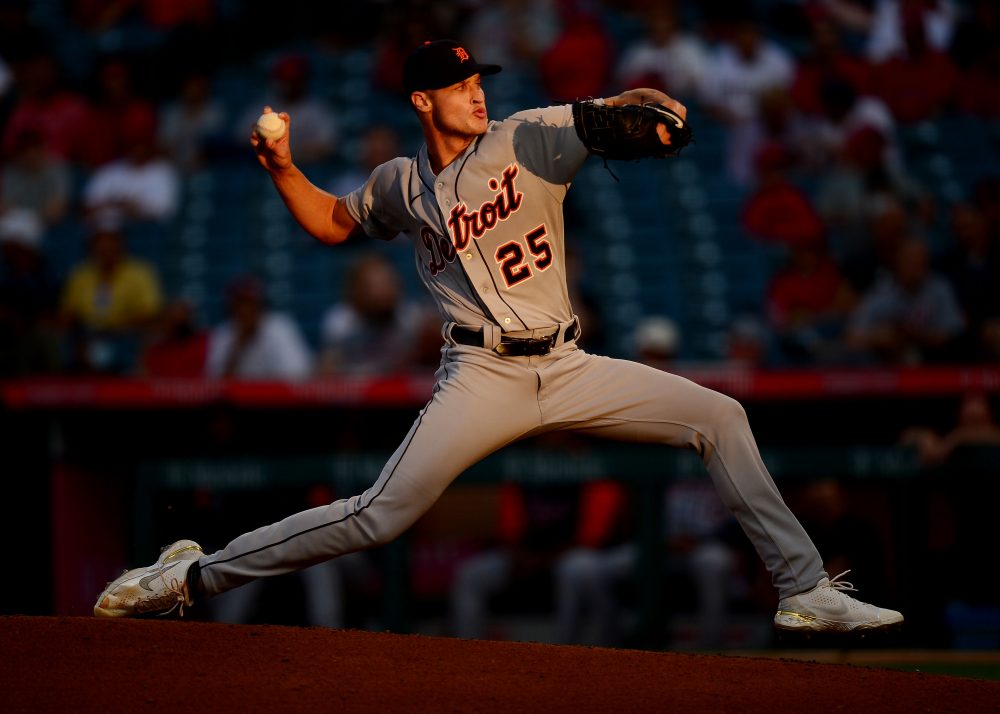 Michael Fulmer $48 ($171, $11)
When Fulmer went on the IL on June 6, the Tigers announced that there was “no timetable” for a return. That sounded ominous, so fantasy managers understandably went out and added José Cisnero, believing that Fulmer might not be back for some time. Eight days later, Fulmer returned, and with two saves in the last five days, it’s probable that Fulmer has the ninth-inning job again. He has been solid out of the pen, and if you take out the damage done against Fulmer as a starter during his second time through the batting order, he has a silky smooth 1.31 ERA and 1.14 WHIP with 38 strikeouts in 34 1/3 innings. There’s a case to be made that the Tigers are better served using him as a multi-inning weapon in front of Cisnero or Gregory Soto, but the Tigers aren’t soliciting my advice. Assume Fulmer is the closer going forward.

Matt Manning $38 ($177, $1)
A lot of the BP write-ups on Manning allude to his mid-rotation upside. The “glass is half empty and someday will be completely empty as we all languish in unquenchable thirst” part of me always reads this phrase and thinks: “That means he’s probably going to be an SP4 or SP5, ugh.” The fantasy value will live or die based on how many strikeouts Manning can generate, something that has always been a question, and it was an issue in his major-league debut last week against the Angels. He will be a solid pitcher, but if he’s one of those low-end strikeout arms, everything else will have to go exactly right for him to be more than a fantasy SP4, at best. I know, I know … I’m getting way ahead of myself, and we don’t have enough data to make any sort of judgements just yet. Manning gets the Cardinals this week and is a borderline deep-mixed option.

Jesús Sánchez $31 ($110, $3)
I thought that Sánchez would generate more FAAB interest than he did. I certainly didn’t think that my paltry $3 bid would get him in my TGFBI bracket. But it did, which makes me wonder if I’m missing something with Sánchez. I see the downside, and perhaps he’s more of a player to stash and dream on than someone who you want to immediately stick in your mixed-league lineup because of the high whiff rate that’s a flashing neon warning sign on the horizon. But his tools (most notably the bat speed) are incredibly enticing, and while I wouldn’t bet my vintage Jeff Conine autographed Marlins hat that Sánchez will put it all together on the job in the majors, he’s worth a gamble in most five-outfielder leagues.

Abraham Toro $22 ($150, $1)
Toro is almost the opposite of Sánchez: a player with little upside but a medium floor. Alex Bregman’s IL stint gives Toro a clean shot at third base, and we’re probably looking at a 15-home-run seasonal pace with a .250 AVG and the odd stolen base. If this sounds crappy to you, then might I interest you in Josh Fuentes, Matt Carpenter, Brad Miller, and all the other stellar third basemen who are available in my TGFBI bracket? Neither you nor the Astros want Toro to be your seasonal solution at the hot corner. For a couple of weeks, though, he’s adequate as a temporary replacement.

Bailey Ober $21 ($54, $2)
Ober’s scouting profile indicated that he was a location/command guy who averaged 86-88 mph on his heater, so while 92 mph is nothing special, it was weird to see him averaging that with his fastball in his four starts with the Twins. Ober was virtually invisible to the scouting community, but Minnesota believed in him and pointed to injuries and poor mechanics as the reason why his velocity was down. If this velo jump sticks, Ober’s six-foot, nine-inch frame and deceptive delivery give him more of an advantage than a more average-sized, low-90s fastball thrower might have. I still wouldn’t use him this week against the Reds, but I’d stash him now in case I’m wrong.

Daulton Varsho $21 ($53, $2)
Carson Kelly’s broken wrist paves the way for Varsho to catch mostly full-time for the Diamondbacks, with the possibility that he might even play an occasional game in the outfield to keep his bat in the lineup every day. This assumption is predicated on the belief that Varsho will hit, and the hopes that his poor numbers in his initial 2021 major-league stint were because playing time was sporadic. Varsho clobbered Triple-A pitching to the tune of a .313/.368/.750 slash line, with nine home runs in 87 plate appearances—though, of course, you’d expect that for a prospect with Varsho’s pedigree in the PCL. He’s worth the gamble in two-catcher leagues, and if you’re desperate for offense, the average bid above should at least be doubled.

Erick Fedde $17 ($38, $1)
No matter how many innings or seasons he’s logged, it always feels like Fedde is a rookie or second-year player. But this is the fifth year that Fedde has been in the bigs, and he now has 245 1/3 major-league innings under his belt. He has also gradually improved every season and is getting attention now because of a 20 1/3 inning scoreless streak through his last three-plus starts. Fedde remains a low-strikeout arm but is generating weaker contact, thanks in part to increased usage of a cutter over his more traditional fastball. I remain mostly unimpressed but would consider using Fedde in solid matchup plays. His appearance at Philadelphia this coming week does not fit into that category.

Tony Kemp $15 ($60, $3)
As the Athletics frequently do, they have managed to extract value out of Kemp, converting him from a backup with marginal value to a super-sub who has logged time both at second base and the outfield for Oakland. The fantasy profile isn’t exciting, unless you’re in an OBP league, but Kemp could put up a 15/12 season with a .260 AVG if he does hang on to a full-time job. That’s all fine in today’s climate, too, particularly due to the multi-positional eligibility.

Chas McCormick $13 ($41, $2)
McCormick has been getting regular reps in right field while Kyle Tucker goes through the COVID-19 protocol. Tucker is supposed to return during the series against the Orioles that started last night, so McCormick’s value going forward is contingent upon whether the Astros would be willing to swap out Myles Straw’s superior defense for McCormick’s offense in center. It’s not like McCormick’s bat has been that dominant, so I see McCormick heading back to his fourth-outfielder role, getting the occasional start and waiting for the next injury to open more playing time when Tucker returns.

Chris Flexen $13 ($41, $2)
Outside of one horrible outing against the Padres on May 21 (1 2/3 innings, 11 baserunners, eight earned runs), Flexen has been quite good, with a 3.14 ERA and a 1.15 WHIP. His biggest detriment is a low strikeout total, which makes him difficult to roster unless you have at least two high-end strikeout hurlers to compensate. Flexen keeps the ball on the ground and in the park, so I’m more than willing to give him a pass for the clusterf*** against San Diego, but he’s still a matchup play outside of AL-only. The matchup against the Rockies this week away from Coors is a good one in 15-team mixed.

I was o-for-2 this week. My bid on Manning ($100) came close, while my bid on Toro ($23) did not. I’m going for volume and strikeouts with my pitching and already have a full staff. I probably have more of a need for Toro, but even my aggressive bid would have been around $60 and wouldn’t have come close.

Catchers and starting pitchers dominated the evening. I have been carrying three catchers for a couple of weeks so figured I’d get some modest trade offers for Eric Haase, Max Stassi, or even Martin Maldonado. No one has taken the bait just yet.

I needed a warm body to replace Isan Díaz, who was optioned to Triple-A, and Alcántara certainly fits the bill. He was a glove-first prospect with the Tigers, who was part of the J.D. Martinez deal with the Diamondbacks way back in 2017. The Cubs nabbed him on waivers this past February, and multiple infield injuries have pushed Alcántara into duty. He’s more likely to provide a shot-in-the-arm to the Cubs as a reserve infielder than Eric Sogard, but I suspect that Alcántara will be the one bumped off the roster when Nico Hoerner returns.

I thought about putting in a modest bid on Garrett, but I’m generally convinced that Lucas Sims is mostly the closer in Cincinnati.