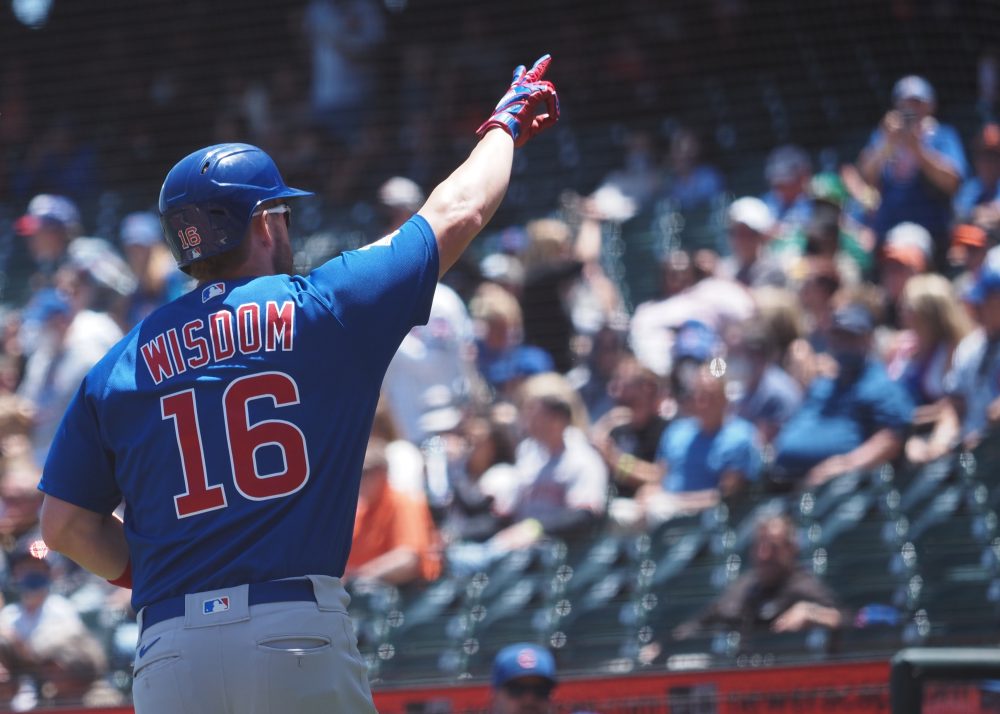 Patrick Wisdom $38 ($152, $1)
I was one of the 26 Wisdom buyers in TGFBI, grabbing him for a shade below the median bid at $33. Wisdom’s power emerged way back in 2017 at Triple-A, when the then 26-year-old hit 31 homers. It was a similar story in 2019, when he hit 31 homers for the Rangers’ Triple-A affiliate in Nashville but only got a cuppa joe with the big club. The issue for Wisdom throughout his career has been lack of contact and strikeouts. If he hits like he did last week for the Cubs (six home runs and a .435 AVG in 24 plate appearances), he’s here to stay (well, duh), but he won’t (well, duh again). The question, then, is how to value him going forward. Even if Wisdom only puts up a 25-to-30 home-run seasonal pace with a .230 AVG, that’ll play. My modest bid speaks to the idea that I wanted to roll the dice but not break the figurative bank doing so.

Paul Fry $37 ($126, $1)
On Opening Day, Fry wasn’t the closer (César Valdez), the sexy name-to-know (Tanner Scott), or the injured arm on whom everyone keeps dreaming (Hunter Harvey), so in a bullpen on a bad team, even those in the know didn’t know who Fry was. But he has quietly posted a 1.99 ERA in 22 2/3 innings, and with the somewhat expected slippage occurring recently for Valdez, Fry and Cole Sulser are both candidates to close. In an unsettled bullpen with so many moving parts, I’m inclined to stay away from this mess outside of an AL-only, where Fry’s high-end ratios matter a great deal more than they do in mixed.

Edward Olivares $33 ($95, $1)
Olivares has kind of fallen off the radar this year, but he has destroyed Triple-A pitching and is once again up with the Royals. He deserves an opportunity to start, and Michael Taylor shouldn’t be a serious obstacle to playing time if the Royals do decide to give Olivares that opportunity. The fantasy appeal is in his wheels, as there is some scouting cynicism about Olivares’ power, but even a 10/25 season would play for us in fantasy if Olivares can get regular reps in center or right for Kansas City.

Taylor Trammell $26 ($111, $1)
Trammell struggled in his long-awaited major-league debut for the Mariners in April, was demoted to Triple-A, destroyed Triple-A pitching across 80 plate appearances, and was brought back up to Seattle last week. Kyle Lewis is seriously injured and could be out for the year, so Trammell has an opportunity to run with the job in left field. The power/speed potential entices, but it remains to be seen if Trammell fixed something while he was in Triple-A or just benefited from the sizable gap between major-league pitching and high-minors pitching.

Eric Haase $20 ($36, $3)
Haase was profiled in this space two weeks ago. Since then, all Haase has done is slug five home runs in 37 plate appearances, with nearly all the damage coming in a four-game stretch from June 1-5. He is slotting in as the Tigers’ primary catcher but has also been getting a little time in the outfield to keep his hot bat in the lineup. Haase’s power potential is considerable, and as is the case with Wisdom, the high strikeout rates don’t matter nearly as much in today’s game as they did a few seasons ago.

Miguel Andújar $19 ($37, $1)
Andújar had a hot week, swatting three home runs in a four-game set against the Rays. He’s still not hitting the ball as hard as he did in his 2018 rookie campaign and has yet to draw a walk, so eventually pitchers will just stop throwing him strikes until he proves he can lay off and take a pitch. He’s not quite a regular. Even in a Yankee lineup depleted by injuries, he has been sitting against some right-handers. He’s OK to take a gamble on, but I like him better in leagues with deep benches as a play when the Yankees are facing a lot of southpaws.

Ryan Jeffers $15 ($40, $1)
Jeffers was a trendy deep-league pick this spring, with conventional wisdom suggesting that he would share the job with Twins catcher Mitch Garver or even win the job outright after a strong, small-sample outburst in his major-league debut in 2020. Instead, Jeffers posted a putrid .147/.216/.176 line with 18 strikeouts in 37 plate appearances and was demoted in late April. A torrid stretch in the minors and a injury to Garver brought Jeffers back to Minnesota, and the early results the second time around are much better. Jeffers has significant power potential, and if he can keep the average north of .230, he will have value even in leagues with one-catcher formats. The risk is the same as it was in April, that major-league pitchers expose his weaknesses, and he doesn’t hit. Long term, I still like Jeffers a good deal. I’m just not sure about his 2021.

The bids on Haase and Jeffers were consistent with what seems to be a market inefficiency with catchers, and a potential advantage in leagues that use FAAB. Reticence to spend big on a risky backstop is understandable, but the upside that can be gained at a position that often delivers little production is considerable. Bidding on catchers this year has generally glossed over this upside.

Ross Stripling $13 ($44, $1)
Kudos to Nathan Grimm here at BP, who put together a great breakdown of why Stripling has had better results (it’s due to a pitch mix change that’s broken down well in his article). Since Nate’s article dropped, we also found out that Stripling changed his delivery because he believed that he was tipping his pitches. A change in his windup has improved Strip’s timing and increased his deception, which is important for a pitcher without dominant stuff. Stripling is a solid low-level arm in deeper mixed formats and worth rostering, given all this new information, but is a Do Not Start this week at Fenway.

Harold Ramírez $12 ($34, $1)
I generally overuse the word “upside” in these columns. It’s obviously important, as we want our players to exceed their expectations, but consistency and reliability also matter, particularly in deeper leagues. Ramírez won’t hit 30 home runs, steal 30 bases, or hit .300. What he will do is be a reliable source of counting stats who will hit a few dingers, steal the occasional base, and give you a .270 AVG, which is a positive when the non-pitchers are collectively hitting .240. There’s nothing wrong with swinging for the fences with hitters like Wisdom, but if your team is injury-riddled or underperforming at some point, boring production out of a couple of lineup slots matters.

Tucker Davidson $10 ($37, $2)
Davidson wasn’t projected to be anything special, but he has pitched well and showed off the strong slider that led some to believe he could exceed his scouting projection as a reliever instead of an SP4/SP5. This is one of those pitchers I’m always reluctant to use because I feel like it could all come crashing down. Then, if it works out, I tend to overcompensate and overexpose myself to that pitcher the following year. I need to work on this. I’d sit Davidson this week in mixed, as he goes into Philadelphia in a tough park with the possibility of rain all week putting Atlanta’s schedule in question.

I got a little too excited by J.P. Breen’s Stash List write-up on Mejía last week. As a result, I was the only bidder at $38. I also grabbed Arroyo for $19 after missing out on Gittens with a $53 bid. I like Gittens, but we’ve been down this road with so many Yankees call-ups this season.

I originally drafted Jeffers for $1 and dropped him when he was demoted thanks to a roster crunch. With the addition of Haase and Maldonado to Max Stassi, I have the weird problem of too many catchers and didn’t feel the need to bid on Jeffers.

Gordon was the other player I considered but believe that he’ll go back to the minors once the Twins are healthy again.

I initially had a $6 bid in on Wisdom and then bumped it up significantly, figuring someone else was going to bid into the teens. I figured wrong, so I overbid by $14 (I would have lost the tiebreaker). It’s difficult to predict the market, and Wisdom in an -only league is a vastly different proposition than he is in a mixed. I don’t feel bad about getting him, but the higher winning bid moves me down from third highest in FAAB to sixth and will have an impact next month if there are only a few interleague trades.