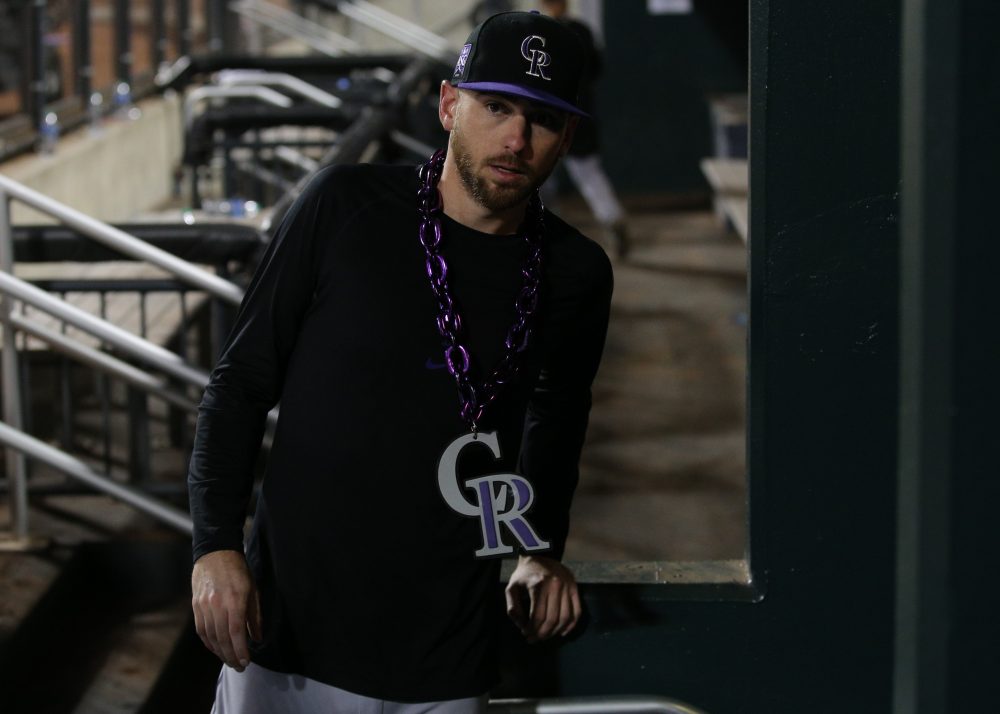 Hansel Robles $51 ($81, $22)
Robles was picked up in 15 of the 29 TGFBI leagues last week. This week, a total of 10 more TGFBI teams added Robles to their squads. He picked up the save for the Twins on Thursday but then blew one on Sunday against Cleveland. One blown save shouldn’t knock Robles out of the role, but he also isn’t the steadiest of closers on a team that has Taylor Rogers waiting in the wings. Robles is a decent low-end option, but the modest bids suggest that no one is expecting an ironclad guarantee that he’s the guy the rest of the way.

Taylor Walls $40 ($162, $3)
I’ll leave the justified anger and gnashing of teeth over the fact that the Rays aren’t giving Wander Franco the opportunity he deserves to the prospect team. Walls isn’t a slouch by any means; he just isn’t Franco. The 24-year-old shortstop is known primarily for his defense, but his on-base and contact skills mean that Walls’ offense is playable, even if his skills don’t translate well to the fantasy side of the ledger. Putting aside whether Walls is merely a placeholder for Franco until he eclipses Super 2 status, Walls’ fantasy value hinges upon how much his stolen base potential—he stole 28 bases in the minors in 2019—actualizes in the majors.

Danny Santana $39 ($124, $1)
The 2020 season was a gaping maw of a lost year for Santana, even by the already ludicrously low bar 2020 provided. He was supposed to be the Rangers center fielder, but a torn ligament in his right elbow ended Santana’s season after a mere 15 games. Santana was subsequently forgotten in drafts this spring. After a blistering 9-for-20 rehab stint, Santana was promoted and has stayed hot in Boston. He could easily crash and burn, but there’s 20/20 potential once again if Santana can find enough playing time around the diamond for the Red Sox. He doesn’t have a clear position but might still be a FAAB bargain in deep leagues.

Kris Bubic $35 ($101, $7)
Bubic started the year in the pen, but after serving as the long reliever in two of Daniel Lynch’s starts, he became Lynch’s replacement. Although he has been solid, keeping the ball in the park and allowing only four runs in 23 2/3 innings, Bubic’s strikeout rate is low, and his control has been shaky. Bubic has been on the 2020 diet of facing central opponents only and will continue that run with a start at Minnesota on Friday. Despite the positive results year-to-date, I see Bubic as more of an AL-only option unless he can get those strikeouts up. The contact-heavy approach will catch up to him sooner rather than later.

James Kaprielian $33 ($81, $1)
At 26, Kaprielian is old for a prospect, but that’s because multiple injuries between 2016-2018 derailed his development and took him off the fast track. He was throwing four above-average offerings pre-injury, including a fastball that was reaching the upper 90s, but averaged 93 miles per hour in two 2021 starts. Figuring out how to evaluate pitchers like Kaprielian, who have a long injury history and lack of a track record, is nearly impossible. The outcomes range from SP2 to injured again to future bullpen piece due to limited durability. As with Bubic, I’m eyeing Kaprielian as mostly an AL-only option in the short term.

Chad Pinder $24 ($60, $9)
Pinder has always been a deep-league fantasy darling, the sort of hitter who the sharps believed could mash 20-25 homers with middle infield eligibility. Pinder has been less than that: a useful cog in the Athletics’ machine, to be sure, but more of a part-timer due to his limitations against righties. Pinder is playing regularly and getting some reps against RHP, so the key will be getting enough production against them to maintain this level of playing time. His value is tied to the ability to move him around the diamond, but right now Pinder is only 2B eligible in leagues that use a 10-game in-season requirement. Pinder has played seven games in the outfield.

Austin Gomber $23 ($47, $3)
Gomber was a popular FAAB addition for a two-start week in late April, was lit up by the Giants in his first start that week, and summarily dropped in many non-mono leagues the following Sunday. He has bounced back, thanks in part to vastly improved control. He has cut the walks down from 19 in April to just three in May, lowering his ERA in the process. Gomber has seen a slight uptick in fastball velocity during his mini-run and has used his change more in his last two starts. He gets an appetizing two-start week against an injury-depleted Mets lineup and the Pirates, with both games coming on the road. Gomber can be used in all formats, even if you still feel hurt and sad by what he did to your team on that late April day in San Francisco.

(Update: Gomber was terrific against the Mets on Monday, although their lineup was oh so incredibly bad.)

Ji-Man Choi $16 ($50, $1)
After missing the first six weeks of the season after knee surgery, Choi came out of the gate hitting. He belted two home runs in his first seven games and 10 hits in 25 at-bats. He started both games over the weekend against a lefty, but I suspect that the plan is to platoon him with Yandy Díaz at first. The Rays have a heavy diet of righties on tap this week (five games out of six), so Choi plays in most formats. He’s not a world-beater but should provide decent power with an OK batting average when he plays.

Martín Pérez $15 ($57, $1)
A large part of what made Pérez unplayable in any format outside of AL-only prior to 2021 was his extremely low strikeout rate, especially as his career progressed and strikeout rates jumped from 20 percent when Pérez debuted in 2012 to 24 percent this season. This has changed in 2021. Pérez is sporting a decent 22 percent strikeout rate, up from his pedestrian career rate of 15 percent. However, while the fastball velocity is slightly up, we have seen mini runs like this from Pérez in the past, and he has mostly pitched against non-AL East opponents. You can play the matchups here if you like, but I’d shy away from any long-term plans to add Pérez. Like all the pitchers profiled this week, he’s an AL-only option for his start this week against the Marlins.

Eric Haase $10 ($32, $1)
Anyone who has spent any appreciable time competing in mono leagues has undergone the sad endeavor of idly looking at minor-league catcher statistics, hoping to find a gem in the rough and alleviate the awful moment where you put a $1 FAAB bid on Cam Gallagher. Haase’s 75 home runs in the minors from 2017-2019 made me consider him as a name for future consideration, even though the scouting reports were less than glowing and warned that it was unlikely he’d ever be a future starter. Haase has made his way onto Detroit’s roster, is playing both catcher and left field, and has popped a couple of home runs. I don’t know how sustainable any of this is, but a modest $10 bid in $1000 FAAB league is suitable to see if Haase can maintain the playing time and maybe find his way to 15-20 dongs on a bad Tigers team. Wilson Ramos went on the IL yesterday, which should gives Haase an even clearer path to playing time.

Merrill Kelly $10 ($24, $1)
Kelly’s 4.22 DRA suggests that he’s better than his 5.05 ERA. Even so, he’s a streamer who should only be used when the matchups are in his favor. He has a home game against the Giants on Wednesday, and in a format like TGFBI I’d leave Kelly on my bench or, better yet, on the waiver wire. He’s a tough pitcher to roster consistently in a league with seven reserve slots that doesn’t have an injured list.

I was 1-for-7 this week, missing out on my first five choices to replace the irreplaceable Mike Trout with Santana, Walls, Miller, Brosseau, and Mendick before settling on O’Hearn. I thought that my bids on Santana and Walls (italicized above) were aggressive, but they weren’t nearly aggressive enough, particularly in Santana’s case. I also tried to sneak Feyereisen in for $1.

Miller was part of the nine-player mega-deal between Cleveland and the Padres that netted the Friars Mike Clevinger last August. Miller profiles as a contact-oriented role player or a second-division regular. He has an opportunity to start in Cleveland and is more of an AL-only target than a mixed-league one, thanks to a lack of speed or big-time power.

Robert was listed as a buy last week, but this was in error. Chris Liss of Rotowire took a low-end gamble that Robert might be back in September.

After a quiet week that saw only eight winning bids, LABR NL came out swinging. A total of 19 players were added, with three going for $10 or more. I bid $22 on Adames but fell well short, with Derek Carty of Rotogrinders blowing me out of the water. Adames is the sort of marginal player in mixed who is essential in NL-only, as he should play every day. While he’s boring, Adames could hit 20-25 home runs with a low AVG. Although Pujols might not hold up as a regular, he’s getting everyday reps right now, and the Dodgers will at least play him against lefties even when everyone else is healthy. I had the second-highest bid on Pujols but came up short. My only buy of the day was Lee at $3. He hasn’t hit at all, but I’m hoping that the skills catch up to the athleticism and that he can provide some steals while he’s with the big-league club. He’s looked completely overmatched so far.