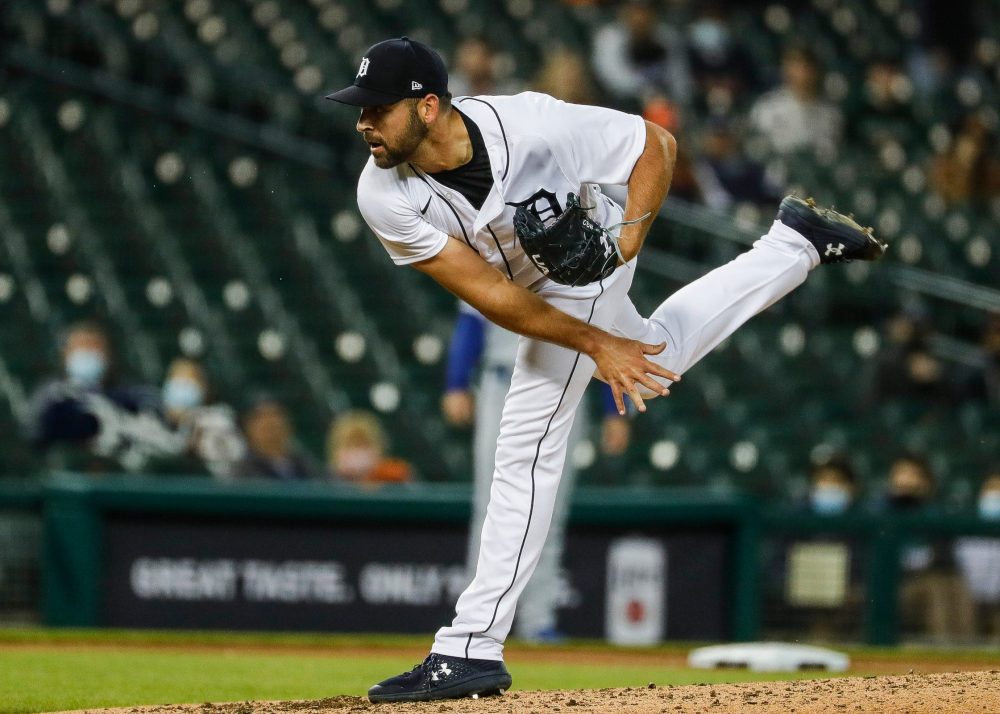 Welcome to the FAAB Review, the column that reviews the goings on in multiple analyst leagues in the hopes we can help you with your own FAAB bidding process and habits. This year, our primary focus is on The Great Fantasy Baseball Invitational (TGFBI), a contest that contains 29 leagues of 15 teams each and crowns an overall champion. We’ll look at the 10 most popular FAAB buys in those leagues every week. We’ll also focus on some highlights in Tout Wars AL and LABR NL, two deeper leagues that I also compete in.

TGBFI and Tout Wars use a $1,000 FAAB budget, while LABR uses $100. Tout Wars also allows teams to place $0 bids. All three leagues run their FAAB weekly on Sundays. For TGFBI I’ll list the average winning bid, followed by the highest and lowest winning bids. LABR and Tout will show the winning bid followed by all losing bids.

Larnach is the first FAAB Review “repeater” of 2021. Twenty TGFBI teams (including mine) grabbed Larnach last week, while seven added him to their imaginary squads this week. He’s off to a 5-for-20 start with only three runs in the way of counting stats. The Twins outfield is even more depleted than it was a week ago, so Larnach has an extended opportunity if he doesn’t stumble completely. The power is legitimate, and it’ll surface in games eventually.

Hill posted an 8.82 ERA with a 1.53 WHIP over his first four starts; he has a 0.83 ERA with a 0.74 WHIP in his last four. He has faced the Athletics (twice), Astros and Yankees during this mini-run, so it’s not like he’s crushing soft opponents, either. The concerns with Hill are durability and how deep he can pitch into games. The Rays are managing Hill’s workload wisely, as he is generally being kept around 90 pitches per start. The drawback to this for fantasy is that it can make wins difficult to come by, particularly since Tampa’s offense hasn’t been a world beater to date. Hill is a must add while he’s pitching like this, but we know his history. He could get hurt and disappear in the blink of an eye, so enjoy it while it lasts.

Fulmer briefly graced Detroit’s rotation, but was getting clobbered after hitters got a second look at his stuff. His .385 OPS as a starter facing opponents the first time through the order was great. His 1.061 OPS the second time? Not so much! Detroit moved him back to the pen, and not only has Fulmer excelled but he has a couple of saves and could supplant Gregory Soto as the Tigers primary closer. The strikeout rate isn’t high, so Fulmer could be prone to the occasional unlucky BABIP blown save if he does get the job, but given the soft competition, he’s at least someone to monitor in deep mixed formats.

Unless you’ve been living in a subterranean dwelling with no Wi-Fi, you know by now that small sample sizes are bad and using them to formulate your FAAB bids leads to poor decisions and chasing last week’s hot players. However, when it comes to relievers, we are often stuck relying on what we otherwise think of as bad process, simply because major league managers can’t or won’t wait for weeks for a shaky arm to right the ship. Taylor Rogers is getting BABIP’d to death in May, his strikeout rate is solid and his peripherals aren’t any worse than Robles’. But Robles has a 1.04 ERA since April 26, has allowed only one earned run in that span and is mostly keeping the ball in the park. Robles picked up a save this weekend and could see more opportunities simply because no one in Minnesota’s bullpen looks like a particularly great bet.

We know, we know: Pillar isn’t nearly as valuable in real life—where his poor on-base skills and eroding defensive abilities put him close to replacement level—as he is in fantasy. But for our purposes, Pillar’s solid power/speed combination matters a great deal, and he always seems to be a relatively cheap FAAB addition whenever he’s available on the wire. With Brandon Nimmo on the IL due to a bone bruise in his finger, Pillar is playing every day in center field and quietly racking up the counting stats. There’s nothing special here—just a player who will put up a 15/15 seasonal pace—but if you have a hole in your outfield that’s worth adding in deeper formats.

(As I was about to hit submit on this piece, Pillar was hit in the face with a baseball and forced to leave the game. I just hope he’s OK and can’t offer much insight or analysis beyond that hope.)

Speaking of injuries opening the door, A.J. Pollock’s balky hamstring has given Beaty an opportunity in left field for the Dodgers. Frequently derided as a non-prospect type in his late 20s who is more of an organizational soldier than anything else, Beaty was decent in 2019 in 268 plate appearances and offers just enough power and speed to make him useful when he’s starting. This average bid is about right. I’d be fine adding Beaty to my roster in a pinch, but I’m not shelling out more than 1-2 percent of my budget.

Velasquez has a shiny 2.84 ERA since being moved to the Phillies rotation on April 23, but his peripheral numbers suggest we’re mostly looking at the same old Velasquez. The walks are down somewhat but the home runs are up and VV has benefited from a 100 percent strand rate that is obviously unsustainable. The matchup this week against Miami makes him barely playable in TGFBI’s 15-team mixed format, but you can count me out.

Philadelphia’s center field problem has been solved, at least in the short-term, as Herrera has built a .333/.400/.511 line over the last two weeks in 51 plate appearances. The .406 BABIP says he’ll cool off in AVG, but all Herrera needs to do is provide league average offense to keep his slot in center. This sounds like a knock on Herrera, but he hit 22 home runs with a .255 AVG in 2018 with a 93 DRC+. The favorable home venue, the lineup, and the lack of internal options all are a boon to Herrera’s chances to be a sustainable fantasy contributor.

Fuentes has done what Rockies hitters are supposed to do: take advantage of the cozy confines of Coors whenever possible. He has a .300/.324/.529 slash line at home with four home runs and 23 RBI in 74 plate appearances. Unfortunately, he has been an apparition on the road, with a gruesome .174/.174/.174 line that amounts to eight singles in 46 PA. The Rockies do have three home games this week against the Diamondbacks but are on the road all next week. Fuentes is a nice luxury to have if you have the bench slot and can take advantage of a full Rockies home slate, but they won’t have one of those until May 31-June 6. It’s also worth remembering that Brendan Rodgers is on a rehab assignment, and it’s likely that Rodgers slots in at second, with Ryan McMahon going to third and Fuentes heading to the bench when Rodgers is ready.

Daza’s splits aren’t nearly as radical as Fuentes’, but he does have a .936 OPS at home compared to .597 on the road. He also isn’t doing much except hitting for average; his one home run and two steals in 101 plate appearances are only palatable because of that luscious .347 AVG. Daza has a somewhat more favorable path to playing time than Fuentes long term, but it’s also not difficult to envision a scenario where Colorado keeps rolling Garrett Hampson out there and Diaz winds up as the fourth outfielder.

Austin Nola’s return from the IL has returned Caratini to a backup role. Caratini’s addition has more to do with how bleak it is out there in two-catcher formats, although some TGFBI teams curiously dropped a non-catcher to add Caratini, which presumably means they are carrying three catchers. Caratini is OK as a hedge to protect your AVG against the Tom Murphys and Martin Maldonados of the world, but don’t spend more than $1-2 for the privilege.

Last week in Tout I missed out on all my FAAB targets, primarily Larnach. This week I was six-for-six, getting Robles, Quintana, Hentges, Haggerty, Gutierrez and Haase for a combined $151. I care less about the wasted FAAB (I could have picked up four of these players for $0) and more about the sad fact that I need six players to backfill holes on a team that sucking so much wind that I can hear a philharmonic orchestra playing in my head.

Marmelejos is an example of how PA are valued in AL-only, even when they’re attached to bad outcomes. He will play thanks to multiple Seattle injuries and despite a .141 AVG and a 34 percent strikeout rate got a few bids in Tout AL. He does have three home runs and Tout is an OBP league, but golly gee willickers, Radioactive Man.

I was more interested in Quintana and Hentges than Kaprellian, but more because of this week’s matchups than anything else. Kaprellian has more upside than Quintana or Hentges long term but I’m a little worried his stay is temporary in 2021, and I need stats more than I need potential.

I splashed a small amount of cash, nabbing Peraza and Adrianza. I initially had $1 down on Peraza but multiple Mets maladies (say that three times fast, or don’t, it’s your life to live as you see fit) mean that Peraza should see regular playing time. I’m hoping he steals bases, although he hasn’t reached double digits in steals since 2018. Adrianza was a pickup based on necessity, as I needed a replacement in the outfield due to lack of positional flexibility (I already have Josh Rojas there) and my goodness is outfield thin in NL-only.

Crowe and Fedde are worse than the options I’m planning on starting this week in LABR, but in a mono league I understand why fantasy teams are taking the chances on these types of arms.