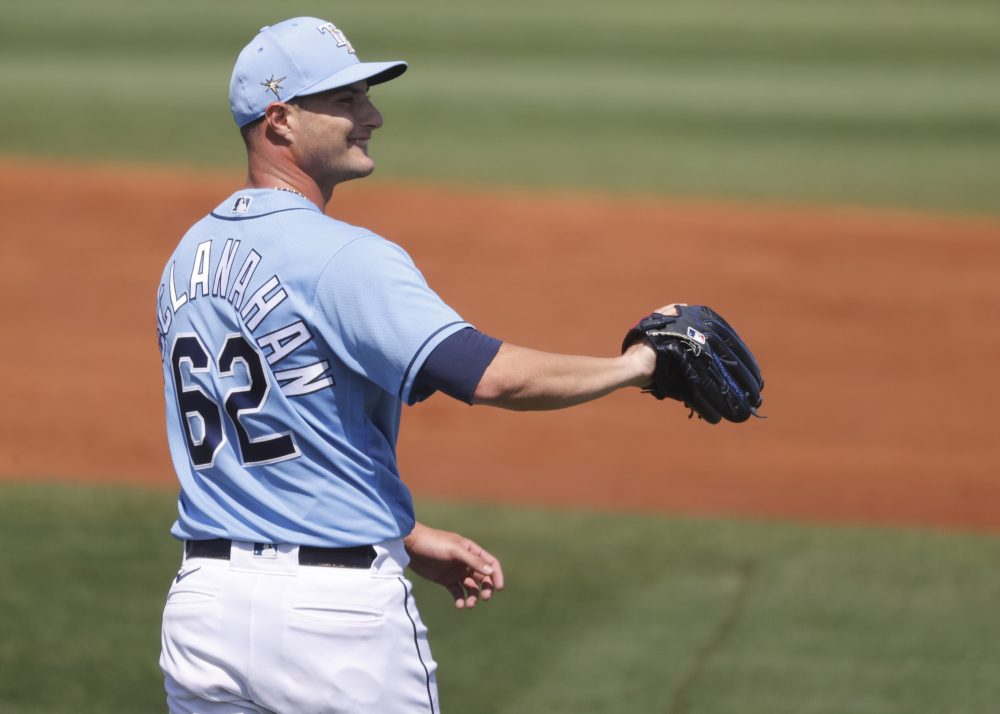 Welcome back to the FAAB Review, the column that examines what been going on in multiple analyst leagues. The hope is that we can help you with your own FAAB bidding process and habits. This year, our primary focus is on The Great Fantasy Baseball Invitational (TGFBI), a contest that contains 29 leagues of 15 teams each and crowns an overall champion. We’ll look at the 10 most popular FAAB buys in those leagues every week. We’ll also mention some of the highlights from Tout Wars AL and LABR NL, two deeper leagues in which I also compete, along with the Tout Mixed Draft league, in which Tim McCullough participates.

Shane McClanahan $117 ($299, $33)
McClanahan dominated a quiet week in TGFBI, garnering bids in 28 of the 29 individual leagues. He made his major-league debut in the postseason last year, allowing four earned runs in 4 1/3 innings with four strikeouts. McClanahan has an eye-popping fastball that sits in the upper 90s, and he can dial it into triple digits. His slider, which our prospect team described this offseason as a “slurvy low- to mid-80s breaking ball” looked more like a high-80s slider with wicked movement that was difficult to pick up in his 2021 debut. As great as McClanahan’s raw stuff was, he still didn’t make it into the fifth inning and dominated mostly in his first time through the order. The ceiling is extremely high, but in the long term he might possess more of a relief profile. McClanahan is scheduled to face the Angels on the road this week.

Josh Rojas $62 ($121, $27)
In March, Rojas was the fantasy flavor of the moment after dominating spring training and earning a spot in the Diamondbacks Opening Day lineup. He then proceeded to completely stink up the joint, putting up a ghastly .065/.216/.065 line through April 17 and finding himself on Arizona’s bench. Fantasy teams understandably cut bait, so of course Rojas then proceeded to work his way back into the lineup due to injuries and ride a torrid .378/.425/.784 line back into real-life and fantasy relevance. While I’d like to believe (I have him in TGFBI and LABR NL), Rojas’s 30 percent strikeout rate during his hot streak lends itself to some healthy skepticism. He’s also been at or near the bottom of the lineup, dampening his stolen-base potential. He’s still a must-roster guy in deep mixed or mono leagues, as the free-agent options at middle infield are brutally bad.

Mike Tauchman $39 ($102, $11)
Tauchman was a deep-league find in 2019, taking advantage of Yankee injuries to work his way into a regular outfield role and providing ample power and speed. He disappeared in 2020 and found himself mostly on the bench. The Yankees flipped him to the Giants last week, and Tauchman is back in a starting role. He has 15/15 potential if he can hang onto the job all year, although San Francisco’s penchant for platoons dampens his ceiling. Fantasy managers tend to fixate more on high power ceilings than modest power/speed combos, but it is the latter category that is becoming rarer and more valuable as major-league teams move away from aggressive baseball.

Kyle Higashioka $35 ($103, $2)
I’ve seen a good deal of the usual, boilerplate advice surrounding Higashioka, along the lines of “he’ll come back down to earth” or “he’ll be exposed by more playing time” from many analysts. While this is true, it’s also the sort of lazy analysis that isn’t particularly helpful when you’re trying to decide whether you should add a player to your team. The Yankees have already said that they will start playing Higashioka more, and the struggles that Gary Sánchez has had on both sides of the plate aren’t new. Higashioka could fail or fall apart if he’s catching four or five games a week, but this could be said for most backstops. I get it. Higashioka isn’t a prospect, and the wheels could come off at any moment. But there’s also a viable path to a season with 15-20 home runs and a low batting average, which plays in any two-catcher format.

Cole Irvin $29 ($95, $6)
In his first two starts, Irvin was pounded by the Astros, with a 7.45 ERA and a mere five strikeouts in 9 2/3 innings. In his last three starts, Irvin has been much better, striking out 20 batters in 17 1/3 innings. He’s also been keeping the ball in the park. Irvin is giving hitters fewer looks at his slider and is mostly throwing his low-90s fastball and mid-80s change. This doesn’t feel like the greatest recipe for success, but I’d be OK rolling with Irvin in deeper formats until he puts up a stinker. Irvin gets a two-start week because of the Jesús Luzardo injury. I’d use him in deeper mixed and mono leagues.

Mychal Givens $27 ($104, $1)
It’s a weird situation in Colorado, where closer Daniel Bard hasn’t gotten results but is still throwing an upper-90s fastball and his trademark slider with bite. It’s possible that the Rockies might either remove Bard from the role or, at the very least, use him in a handful of lower-leverage situations until he returns to form. Givens could supplant Bard, although Robert Stephenson could also slot into the role. Given that no reliever in Colorado’s pen has been dominant, I’d avoid this situation entirely outside of NL-only—unless you’re desperate.

Garrett Richards $21 ($61, $5)
After a lackluster start to 2021 with diminished velocity, Richards has rebounded and is throwing close to the 95 mph that he historically has averaged with his fastball. The recovered velocity has been attached to more strikeouts, and while a pair of soft matchups on the road against the Mets and Rangers last week deserve some caveats, Richards is looking more like the mid-tier arm some were expecting and hoping for when they snagged him late in drafts this spring. He’s an AL-only option this week on the road in Baltimore.

Yonathan Daza $19 ($77, $4)
As a prospect, Daza profiled as a toolsy fourth outfielder who was unlikely to find himself in a starting role. Colorado’s thin roster has given Daza an opportunity to start, but he has done little with it, hitting a woeful .284/.279/.358 in 69 plate appearances. Daza does have some speed and Coors is Coors. Even so, he’s a marginal add in anything outside of an NL-only.

Andrew Knizner $7 ($28, $1)
As a prospect, Knizner profiled as an offensive-first backstop, but he hasn’t had many opportunities to play in an organization where Yadier Molina exists. Molina’s strained foot gives Knizner a short-term opportunity, and it’s possible that Knizner could provide a homer or two with an acceptable batting average while the potential future Hall of Famer is on the shelf.

Mike Zunino $4 ($9, $1)
The early returns on Zunino have been terrific, as the Rays catcher has five home runs in 60 plate appearances and is hitting for power like he did during his brief 2016-2017 peak with the Mariners. Zunino’s batting average is poor, as it usually is, and the strikeouts are very high. There’s an argument for rostering Zunino if your team is on either end of the spectrum in batting average (dominant or you’re already dumping the category), but the risk otherwise is considerable. The conservative bid range above obviously understands the proposition.

I’m dead last in Tout AL. This isn’t hyperbole, as I’m 23 points behind the 11th-place team. This week’s pair of injuries were Luis Robert and Jesús Luzardo. I opted for Kremer’s two-start week, grabbed Alcalá to replace Sergio Romo, and reacquired Urías for Robert after missing on both Phillips and Rojas. Maybe my process is lacking something, but when $112 of your $260 initial roster has been on the IL at one point or another, it isn’t too difficult to figure out that it’s mostly not your fault.

Lynch was a late addition to the Royals rotation, so only three teams bid on his services. He had his major-league debut yesterday against Cleveland and is home against the White Sox on Saturday. His stuff is great (a mid-90s fastball, above-average slider, and change), but durability and health have limited Lynch in the minors and make many folks believe that his long-term future is as a reliever. In the here and now, he’s a worthy roll of dice and might even be worth considering in standard mixed for this week’s slate.

My $6 bid on Tauchman wasn’t close, and my $1 bid on Herrera was a narrow miss. The Scrubs part of my Stars and Scrubs offense has mostly worked, so I didn’t feel the need to be overly aggressive for Tauchman. I grabbed three middle relievers in Castro, Hill, and Feyereisen in the hopes that they grab some strikeouts and maybe a win or two, while I wait for Johnny Cueto to return. I reserved Jake Arrieta, put Andrew Miller on the IL, and reserved Yoan López.

Marisnick has seen some starts in center field in favor of struggling starter Ian Happ. The Cubs are more invested in Happ’s future success than Marisnick’s, although the latter is a useful fourth or fifth outfielder in this format.