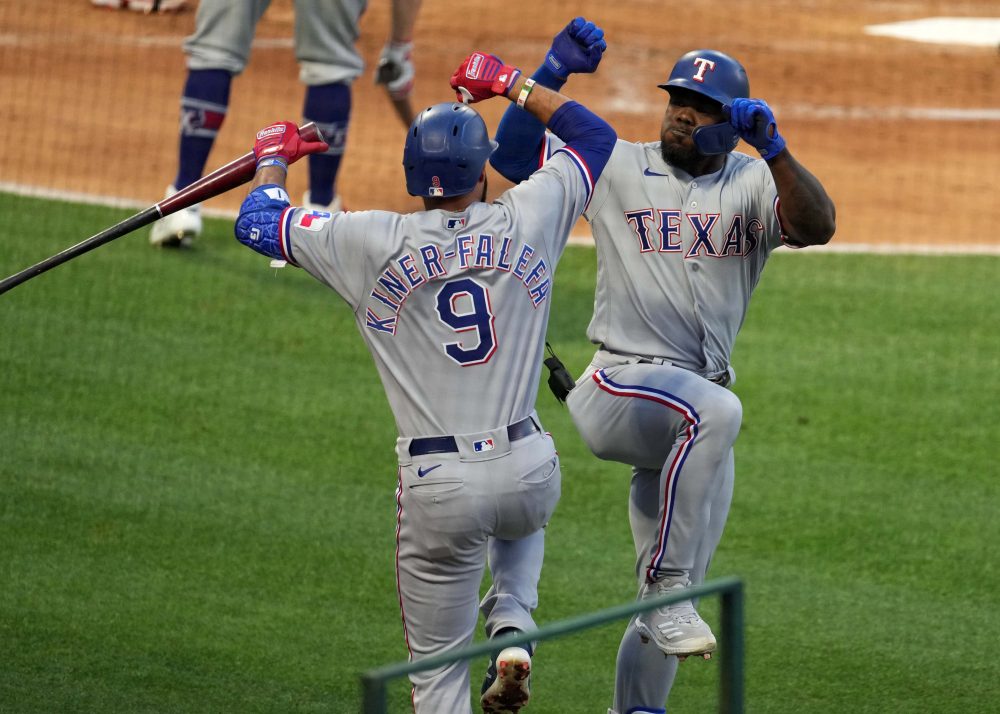 Welcome back to the FAAB Review, the column that examines what been going on in multiple analyst leagues. The hope is that we can help you with your own FAAB bidding process and habits. We’re changing things up a little this year and will mostly focus on The Great Fantasy Baseball Invitational (TGFBI), a contest that contains 28 leagues of 15 teams each and crowns an overall champion. We’ll look at the 10 most popular FAAB buys in those leagues every week. We’ll also mention some of the highlights from Tout Wars AL and LABR NL, two deeper leagues in which I also compete

Ryan Weathers $122 ($308, $51)
Weathers has been excellent, posting a 0.59 ERA in 15 1/3 innings across five games (two starts). The challenges with rostering Weathers in fantasy are that he’s more of a fill-in arm for the Padres while they wait for reinforcements, and his ability to go deep into games is in question, limiting his opportunities for wins. In deeper formats, the strikeout potential makes Weathers worth using. However, if you need wins or volume in strikeouts in standard mixed, you might want to only use Weathers in two-start weeks. He is scheduled to pitch at Arizona this week.

Adolis García $121 ($208, $70)
Smarter fantasy managers took a low-end gamble on García last week, when he went in 11 TGFBI leagues for anywhere from $1 to $69. I’m one of the dummies who waited and spent close to the median on García, plunking down $123 for the toolsy Texas outfielder. I’m not excited about García’s long-term outlook, as his plate discipline is poor and his weaknesses on breaking stuff in the minors are likely to be exposed by major-league pitching. But in the short term, the Rangers offense is terrible, Leody Taveras didn’t cut it, and someone needs to play center field. García has a decent chance to hit 25-30 home runs and steal 5-15 bases. Even if that comes with an ugly batting average, those numbers play almost everywhere.

Nico Hoerner $73 ($192, $24)
Hoerner generates a great deal of excitement among Cubs fans, and in terms of his potential real-life production, it makes sense. But for fantasy, Hoerner is a boring middle-infield grinder whose most flattering comps are the 2019 versions of Jean Segura and Kevin Newman. That would be a fine outcome for the Cubs, as 2-3 WARP middle infielders don’t grow on trees, but in fantasy Hoerner must maximize his contact skills and reach at least a .280 AVG to be more than an NL-only bat. We also haven’t seen much from Hoerner in terms of a professional résumé, so while he could be a dynamic third middle infielder in fantasy, we’re mostly going on a scouting profile and a limited number of professional at-bats.

Josh Staumont $65 ($150, $4)
After an April that saw plenty of aggressive bids on closers and would-be stoppers, this week saw far less FAAB activity on relievers. The exception was Staumont, one of six Royals relievers with a save in 2021. Greg Holland has been terrible this season, but Staumont hasn’t necessarily been the best relief arm in Kansas City either (that distinction goes to teammate Scott Barlow). But Staumont has the last two saves out of the Royals pen, and while manager Mike Matheny has said repeatedly that it’s a committee, Staumont has the ability and the punch-out pitches to run away with the gig.

Alex Wood $50 ($111, $11)
Wood was mostly hurt in 2019-2020, and when he did pitch, he was bad, posting a 5.96 ERA in 48 1/3 innings across the two seasons. But this is a pitcher who had a career 3.29 ERA through 2018 in the first 803 1/3 innings of his career. “Can Wood stay healthy?” is a reasonable question that tamps down any sort of expectations of long-term value, but if Wood is healthy, he should be rostered almost everywhere. The 63 percent ground-ball rate won’t maintain, and Wood isn’t a high-strikeout arm, but he could play as an SP3 with an ERA in the mid-threes if everything goes his way. He has a very favorable matchup scheduled at home against the Rockies.

Pavin Smith $38 ($100, $11)
Drafted seventh overall by the Diamondbacks in the 2017 Draft, Smith was considered a reach at this slot by many but still worthy of a first-round pick. He was a polished college bat who some worried would never develop enough power to be a viable major-league first baseman but not enough defense to make it in a corner-outfield slot. The good news is that improved conditioning and hard work in the field led to Smith being a solid outfielder, to the point where Arizona is now rolling with him in center. The bad news is that the power still isn’t there. While the 1B/OF eligibility is useful, it still makes Smith kind of fringy in anything outside of NL-only.

Jordan Luplow $35 ($102, $1)
Luplow had a solid 2019 for Cleveland as a platoon bat against southpaws but quietly faded into the woodwork after a lackluster 2020. He has reemerged as a viable outfielder for the Baseball Team, swatting five home runs in the early going with a .233/.353/.651 line in 51 plate appearances. Luplow could bust out of the platoon role—not because he’s any great shakes against righties but because Cleveland’s lineup stinks and Jake Bauers isn’t providing any sort of competition. Luplow could slink back into irrelevance in short order, but the strong batting eye combined with the decent pop makes him a potential 20-home-run bat if he sticks.

Austin Gomber $32 ($73, $11)
Gomber’s control was shaky in his 2021 debut against the Dodgers at home. Since then, he’s kept the walks at a reasonable rate and has been a serviceable starter for the Rockies. The problem with Gomber in fantasy is the “for the Rockies” part of that last sentence. While Gomber is talented and profiles as a potential SP4, thanks to two above-average secondary pitches and a low-90s fastball that plays up thanks to a funky delivery, the Coors Factor will always drag down his value, particularly for a pitcher who isn’t a strikeout machine. Gomber has a sweet two-step away from Colorado, with the Giants and Diamondbacks on tap. He’s a borderline option in 12-team mixed this week.

Chris Flexen $27 ($66, $3)
If you haven’t read Timothy Jackson’s excellent analysis of Flexen, rectify that mistake now. Flexen is a different pitcher than the mediocrity who pitched for the Mets, and while I don’t expect him to continue to post a sub-three ERA, he has dropped his walk rate and is keeping the ball on the ground, with a solid infield defense behind him to boot. The six-man rotation hurts Flexen’s value a little bit, but in deeper leagues this is a non-factor. He squares up against the Angels this week.

Willians Astudillo $15 ($46, $1)
If Astudillo didn’t have catcher eligibility, and if TGFBI weren’t a two-catcher league, he wouldn’t be profiled in this space. But he does and it is, so he is. Astudillo was acquired in 15 of the TGFBI leagues at a modest price. The 29-year-old old backstop has been playing first base regularly in Miguel Sanó’s (strained hamstring) absence. He’s a great contact hitter with a career .294 batting average in 363 plate appearances but offers almost nothing else of fantasy relevance. Thankfully, he’s catcher eligible, so as long as Astudillo has a pulse and playing time, he’ll make for a fine second catcher.

Tout AL was down to nine winning bids this week. At this rate no one will be bidding on any players by late May. I added Ford and moved Ramón Urías to my bench (with Hanser Alberto moving to middle infield) and Plawecki for the injured Max Stassi. Not particularly exciting stuff, although hopefully Ford gives me some homers before Luke Voit’s return next month.

O’Hearn was the only contested purchase over $5. He has started three out of four games since being recalled by the Royals and will play almost exclusively against right-handers. He has some pop and is better in an OBP league like Tout.

My $1 winning bid of Nick Neidert last week blew up in my face, and rather than take a chance on another Marlins starter, I decided to go with a reliever, grabbing López. Closer Stefan Crichton hasn’t stood out. I’m hoping that López can, at the very least, get a garbage save or two.

Maton was starting at shortstop with Didi Gregorius out and is now starting at second with Jean Segura out. He profiles more as a future bench piece, but these are exactly the sort of situations where future bench pieces can provide value in the here and now. Maton added some strength and was hitting the ball harder at the alternate site in 2020, but we have yet to see those gains translate into game action.

You need to be logged in to comment. Login or Subscribe
wolverine
I posted this last week, as well, but, seriously, can you PLEASE go back to publishing this piece on Monday mornings like you did in past seasons? It's only interesting now as a gauge to see how your FAAB bids compared to other leagues, not as a useful guide to MAKING your FAAB bids, as it purports to be. It's utterly useless in that department when most leagues have to make their bids by sometime on Monday. Tuesday publishing is simply a post mortem and significant.y diminishes the value of these articles.
Reply to wolverine
J.P. Breen
Thanks for the note. We’ll discuss if there are manageable ways to address this concern, but for transparency, we made the decision to move this article from Monday to Tuesday in order to ease the burdens of both Mike and the editorial staff, who have other full-time jobs to consider on Monday mornings.
Reply to J.P.