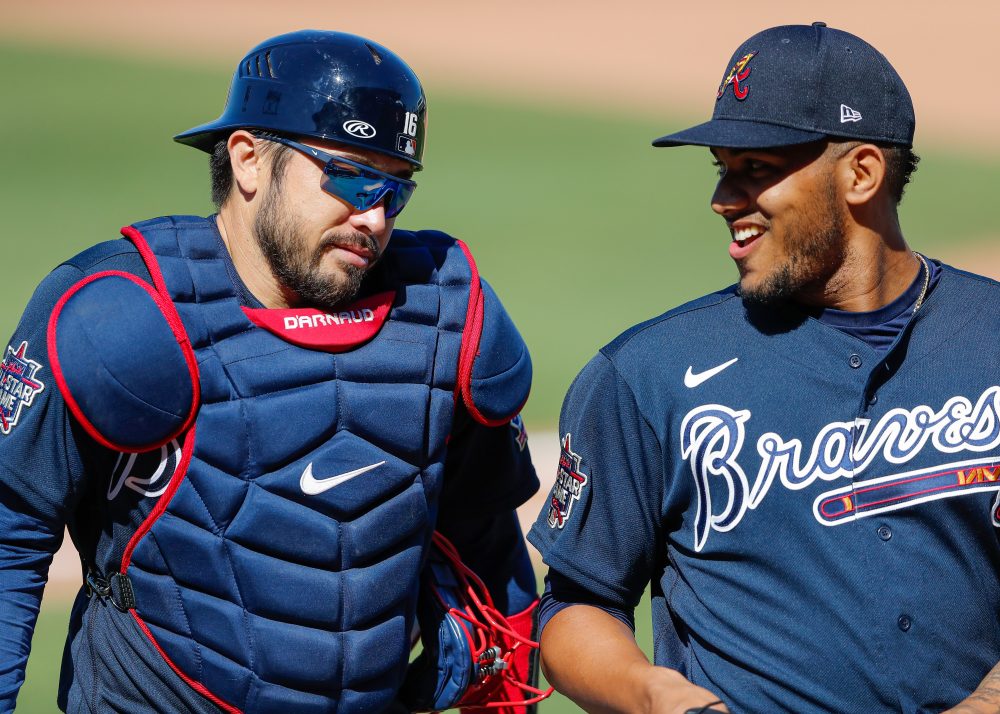 Welcome back to the FAAB Review, the column that examines what been going on in multiple analyst leagues. The hope is that we can help you with your own FAAB bidding process and habits. We’re changing things up a little this year and will mostly focus on The Great Fantasy Baseball Invitational (TGFBI), a contest that contains 28 leagues of 15 teams each and crowns an overall champion. We’ll look at the 10 most popular FAAB buys in those leagues every week. We’ll also mention some of the highlights from Tout Wars AL and LABR NL, two deeper leagues in which I also compete, along with the Tout Mixed Draft league, in which Tim McCullough participates.

Kendall Graveman $179 ($283, $72)
I bid a modest $87 on Graveman in my TGFBI bracket and got him. He was added in only 14 TGFBI leagues this week, which means that more savvier fantasy managers already added him more cheaply last week (or earlier). He looks like the Mariners closer going forward, although it’s possible that he won’t strictly be used as a traditional closer and will get a few “heart of the order” outings in the seventh or eighth that don’t result in saves. Graveman is averaging 96-97 mph on his heater and isn’t the middling starting pitcher that he was a few years ago in Oakland. This is a legitimate performance change. I don’t make many bold predictions in this space, but Graveman could be a top-five reliever heading into drafts in 2022.

Zach McKinstry $125 ($217, $47)
This past offseason, our prospect team identified McKinstry as “the Dodgers next out of nowhere player development story” (they even underlined it!) and said that “the Dodgers might not miss Enrique Hernández as much as you’d think.” Flash forward to 2021, and of course McKinstry has stepped into the void created by multiple Dodger injuries and has posted a .319/.353/.617 line in 51 plate appearances. McKinstry has been the primary beneficiary of Cody Bellinger’s hairline fracture and will continue to garner regular playing time, even if it isn’t at one position. I don’t anticipate him hitting a ton of homers, but he should provide decent counting stats. McKinstry is playable everywhere outside of standard and shallow mixed leagues.

Rafael Dolis $80 ($162, $21)
With both Julian Merryweather and Jordan Romano on the shelf, Dolis is the obvious favorite for saves in Toronto, even though the Jays haven’t had an opportunity since Merryweather was sidelined with a strained oblique. Dolis was fine when called upon by the Jays last year when Ken Giles was hurt, splitting duties with Anthony Bass. The primarily issue with Dolis is control. He had a 5.25 BB/9 in 2020 and has a career 5.5 BB/9. If there’s anything that could keep him from running with the job, it’s walking the park.

Huascar Ynoa $61 ($149, $12)
Ynoa’s profile as a prospect was as a hard-throwing hurler with extreme command issues who might be pushed to the bullpen as a result. The great news for Ynoa believers is that he has walked just three batters in 16 innings this season, throwing strikes and letting his dominant stuff do the work. The bad news is that he was shelled by a bad Cubs offense in his last outing, allowing three home runs in four innings before departing. Maybe it was just one bad start, but Ynoa is an object lesson as to why you can never assume that a young pitcher will have smooth sailing from wire-to-wire. It also shows that matchups are less reliable barometers with younger arms. He’s home against the Diamondbacks this week.

Jakob Junis $48
Junis has pitched quite well in 2021, thanks mostly to the addition of a new cutter. He won’t post a sub-two ERA, but this appears to be a legitimate change that should make him a mid-tier option and worthy of adding in nearly any format. He gets the Rays this week at home, and the only mild caution worth noting is two shutout relief outings have padded the overall line.

Joe Ross $42 ($133, $1)
Entering the season, Ross was seen as an afterthought, even in NL-only, but a total of 11 shutout innings in two starts against quality opponents has changed that perception in a hurry. He’s throwing his slider more, which could be contributing to Ross’ early success, but it’s difficult if not impossible to tell if that’s the reason he’s thriving. He’s also not striking out a lot of guys, so it could mostly be batted-ball luck. He still looks more like a fifth-starter, matchups play to me in any format, but this week is certainly the time to play Ross for that reason, with a solid two-start week against the Cardinals and at the Mets.

UPDATE: Welp. I wrote the blurb above on Monday morning, and Ross was shellacked by the Cardinals last night.

Michael Fulmer $39 ($128, $4)
Fulmer returned from Tommy John surgery in 2020 but looked off in his 10 starts. His velocity was down, and the results weren’t there. This year, Fulmer looks much more like the pre-TJ version of himself. This praise does come with a pair of caveats. First, three of Fulmer’s outings have been out of the bullpen, where it’s easier to let loose and throw harder. Second, his dominant start came against a decimated Astros team that was running out a B-lineup. However, the velocity being up matters, and it’s likely that Fulmer has recaptured his pre-surgery form, even if that makes him more of a high-threes ERA arm than an ace. He gets a two-start week against the Pirates and Royals, which makes him extremely tempting.

Willie Calhoun $37 ($75, $1)
Where I was judicious with Graveman and got him anyway, I threw caution to the wind with Calhoun (relatively speaking), making the highest bid in all the TGFBI leagues. Calhoun once again has an opportunity to start on a depleted Rangers offense and will, at the very least, be on the strong side of a platoon at DH. He’s two years removed from his strong 2019 showing, but an injury on a hit-by-pitch is a great reason to write off Calhoun’s 2020. As far as shoot-for-the-moon power plays go, this is the best opportunity that you might have all year to add a 35-plus home-run hitter to your squad. Just know that Calhoun is also a 26-year-old who has struggled in various, non-2019 big league stints, and who is a defensive liability. He needs to mash to keep his job (although being on a bad Texas offense gives him more staying power than he’d have on a better team).

Danny Duffy $34 ($75, $3)
Like his teammate Junis, Duffy has shown noticeable improvement beyond the raw numbers, with a 2.5 mph jump on his fastball from 2020. The strikeout rate still isn’t anything special, but Duffy has more cachet as a back-end starter than he had entering the season. He has a strong two-start week with the Rays at home and the Tigers on the road. Something to keep in mind with all AL Central pitchers is facing Cleveland, Detroit, and Kansas City helps some pitchers more than others for, ahem, obvious reasons.

UPDATE: Duffy looked terrific against the Rays last night, blowing hitters away with a 93-94 mph fastball with darting movement.

Kyle Gibson $29 ($71, $3)
It’s always great when you grab a player a week early rather than a week late, and I felt rather good about getting Gibson for $1 last week. Like Junis, Gibson has added a cutter to his repertoire, but in Gibson’s case he hasn’t seen a bump in strikeouts. Instead, he has gotten weaker contact with his new pitch. I don’t see Gibson as more than a borderline deep-mixed arm with matchup potential in standard mixed, but teams that drafted him were too quick to toss him aside after one horrible outing against the Royals. He’s at the White Sox this week, and I was on the fence about using him in TGFBI. It was announced earlier in the day that Dinelson Lamet would get at least one start this week, which sent Gibson to my bench.

Stephen Piscotty $12 ($23, $3)
Piscotty is off to a strong start for the Athletics, although he has been the beneficiary of feasting against southpaws as part of a quasi-outfield platoon. In other words, while Piscotty’s early numbers look great on the surface, he remains a matchup play outside of AL-only. He’s scheduled to face two lefties and four righties this week.

Because it’s AL only, I wouldn’t expect the bidding to be as robust as in a mixed league, but it has been relatively tepid compared to past seasons. I bid modestly on Rodríguez and Guerra and won two uncontested bids, moving Casey Mize and Sergio Romo to my bench. Closers are much harder to come by in mono leagues, so I’d rather go after skills and strikeouts than gamble on a bad reliever who might get a stray save.

There was some activity on low-level offensive plays like Kemp and García. Kemp has a tough road to playing time if Jed Lowrie stays healthy. García’s 32-home-run, 14-steal line at Triple-A in 2019 makes him intriguing. If the Rangers are willing to roll with him in center over Leody Taveras the playing time is there, but García hasn’t done much with his opportunity to date.

Irvin and López were two of 11 projected starting pitchers in the free-agent pool, and perhaps the best ones available. There are always innings available, but Jorge López, T.J. Zeuch, Bruce Zimmerman, Nick Margevicius, and Jordan Lyles are the kind of arms you can almost always leave on the wire.

I made my first two purchases in LABR NL, grabbing Moniak and Neidert. I’ve been carrying Albert Almora on my roster all year and wanted a better opportunity for volume. Many scouts see Moniak as a future fourth outfielder or a second-division center fielder. For now, though, the Phillies are indicating that Moniak will start in center against righties. He’ll never come close to living up to his lofty 1-1 draft slot, but for fantasy a 10/15 outcome is possible if Moniak can keep the job.

Neidert is a pitchability SP4/5 who has seen his velocity jump from the upper 80s as a prospect to the low 90s in the majors. He has also increased his slider usage. Neidert showed some flashes of upside in his first two starts against the Mets and Atlanta but mostly looked erratic with lousy command. He’s the kind of arm who will need to be a command king to be more than an SP5 or Quad-A arm, and he’s not on the right team to stick for too long in the starting five if he struggles.

You need to be logged in to comment. Login or Subscribe
Jon Crate
Fulmer is my kind of pitcher for AL-only. Pretty cheap, ERA just under 4.00, just what I look for. I always figure if I can keep an ERA about 3.80 I'll be in the running for for ERA, W, and WHIP, and probably middle of the pack for Ks. If your pitching staff is that cheap and effective, and the rest is spent on offense, that's about all you really need.
Reply to Jon