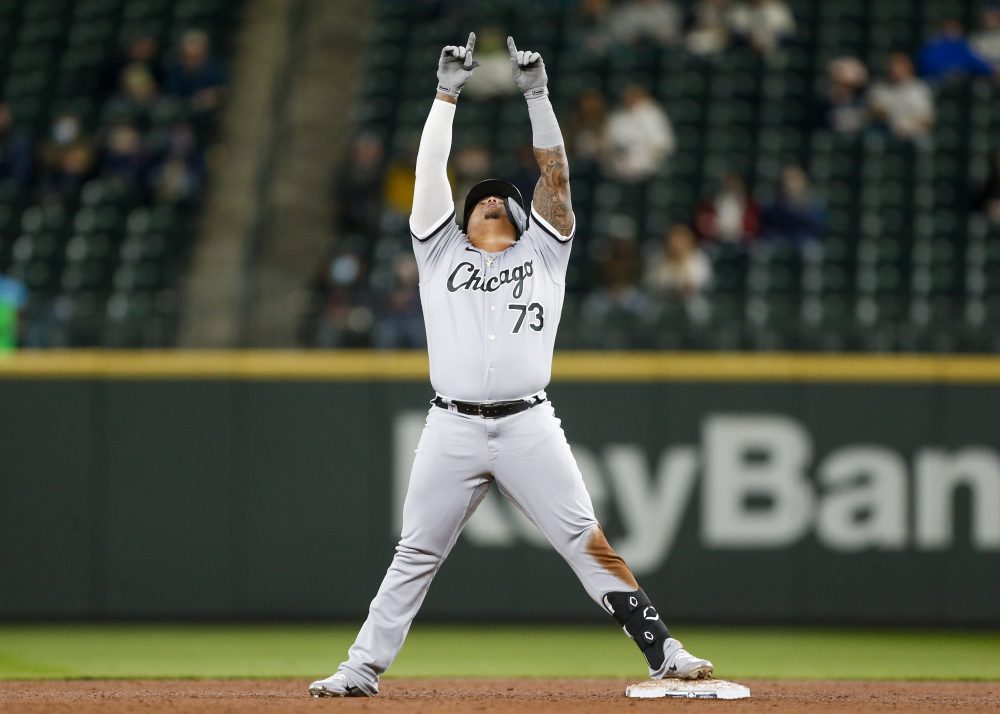 Welcome back to the FAAB Review, the column that examines what been going on in multiple analyst leagues. The hope is that we can help you with your own FAAB bidding process and habits. We’re changing things up a little this year and will mostly focus on The Great Fantasy Baseball Invitational (TGFBI), a contest that contains 28 leagues of 15 teams each and crowns an overall champion. We’ll look at the 10 most popular FAAB buys in those leagues every week. We’ll also mention some of the highlights from Tout Wars AL and LABR NL, two deeper leagues in which I also compete.

Julian Merryweather: $250 average (Maximum Bid $591, Minimum Bid $105)
Timing is everything. If the Blue Jays had lost on Sunday, I suspect that Merryweather might have been picked up in handful of leagues as a cheap, speculative play. Instead, Merryweather picked up his second save of the young season, and it was off to the races. The righty throws a fastball in the upper 90s, a slider with bite in the upper 80s, and a plus change. Injuries have always held Merryweather back, but when he’s healthy and everything is working, he arguably has the best stuff in the Toronto pen.

Is he the closer? Some are suggesting no and think that this is a committee, but I’d be more convinced of that if Merryweather had come in to retire the bottom of the Yankee lineup, with the rationale being that the Yankees 4-6 hitters were more suited for Jordan Romano. The TGFBI bidders obviously believe in Merryweather. I won his services, but my $112 bid was the second-lowest winning bid in all the TGFBI leagues. I imagine that I’ll be chasing saves all year long and didn’t want to blow $300-plus on a non-definitive closer.

Yermín Mercedes: $81 (Max $333, Min $4)
Understandably overlooked in the preseason due to a crowded lineup, the Eloy Jiménez injury opened the door for Mercedes at DH, and he’s bashed it wide open. He smashed Triple-A pitching in 2019, and while that was a very favorable offensive environment, the talent was clearly present. Mercedes’ batting stance provides him a good deal of plate coverage, and this combined with good pitch recognition (he has never struck out more than 19 percent of the time at any level) makes it likely that his early success isn’t a mirage. He’s DH-only at the moment, but if you can find a way to squeeze Mercedes onto your team in anything but the shallowest formats, you should do so.

César Valdez: $79 (Max $163, Min $18)
Valdez is a 36-year-old journeyman who debuted in the majors for the Diamondbacks way back in 2010, had nine miserable appearances, bounced around the minors and the Mexican leagues for almost a decade (with another brief stop in the majors in 2017), and finally landed with the Orioles in 2020. He pitched 14 1/3 solid innings for Baltimore but didn’t get any saves. So, naturally, he flew under the fantasy radar. That has quickly changed, as Valdez had two saves for Baltimore over the weekend. He primarily throws a changeup, using multiple angles and deception to fool hitters with a pitch that averages 78 miles per hour. This isn’t hyperbole, either. He has used his change 82 percent of the time in 2020-2021. I’m skeptical about Valdez’s long-term success, but it looks a little less likely that the Orioles will be employing a committee than it did on Opening Day.

Kyle Isbel: $69 (Max $155, Min $2)
I wish that we had a 2020 minor-league line to look at, and that the Royals had faced a more challenging opponent than the Rangers this weekend. Sometimes, though, when life gives you lemons, you must write a fantasy blurb about a player anyway. Isbel is highly regarded in the scouting community, with some believing his long-term ceiling is as a 15/25 player with a decent batting average. You can ignore his 2019 minor-league numbers. He was in a terrible offensive environment and was doing well before he broke his hamate bone and struggled upon his return. The problem is that Isbel had never played above High-A. I suspect that he will struggle at some point, but we all know the deal. If you want to get on this ride at a reasonable price, now is the time to do it.

Michael A. Taylor: $47 (Max $143, Min $10)
For years, Taylor was an enticing fantasy player but an iffy real-life player who was trapped on an excellent Nationals team. He was a regular in 2015, but he mostly settled into a fourth outfielder role and was only worth it in NL-only because of his 20-steal potential. Taylor is still the same player. Now, though, he’s on a below-average team and as a result has an opportunity to rack up a 20/20 season with Kansas City, if everything breaks his way. The downside is that Taylor could be exposed with everyday at-bats and, even on a second division team, fall into a reserve role. For about five percent of your FAAB budget, he’s certainly worth the modest gamble.

Tanner Houck: $42 (Max $122, Min $5)
Houck’s moderate floor should keep him employed in the majors for years. The question is whether he’ll survive as a starting pitcher based on a solid but unspectacular arsenal that has some wondering whether he has enough to get through the lineup a second time or enough to survive against left-handed batters in any role. Houck had his ticket punched to the alternate site on Opening Day, but an Eduardo Rodríguez injury pushed Houck into the rotation. He was solid against the Orioles in his 2021 debut and has a rematch on tap in Baltimore this week.

Chris Devenski: $29 (Max $87, Min $5)
Devenski picked up the save for the Diamondbacks on Sunday. Joakim Soria came into the same game in the eighth and left with a leg injury. I’m not sure that Devenski is the closer, but I bid $22 in my TGFBI (and won his services) to find out. Devenski barely pitched in 2020, but if he’s healthy, he can be a capable reliever for Arizona. Although he’s not the prototypical ninth-inning option, he could get an opportunity to run with the gig in a thin bullpen.

Davis picked up the save for the Royals on Opening Day after presumptive closer Greg Holland faltered. He was fine as a low-end speculative opportunity on Sunday, but Jesse Hahn picked up a three-out save yesterday. This could be a true committee, making Davis more of an AL-only play than a mixed-league option.

Evan Longoria: $23 (Max $77, Min $7)
Longoria came out of the gate on fire, with three excellent games against the Mariners. He is supposed to be on the wrong side of a platoon but started against a righty on Saturday because the game was in an AL park, the Giants needed nine hitters, and they ran out of right-handers on the bench. Since 2018, Longoria has a .832 OPS against southpaws and a .687 OPS against righties. Among third basemen with 500-plus plate appearances in that span, only Rio Ruiz, Tim Beckham, Isiah Kiner-Falefa, and Hanser Alberto were worse. The Giants are scheduled to face three righties and three lefties this week. I’d pass on Longoria in anything outside of NL-only, unless the Giants are facing at least five lefties in a week.

Adrian Morejón $21 (Max $44, Min $2)
The stuff is great and the ceiling is high, but we don’t know whether Morejón has enough command or endurance (he didn’t make it out of the fourth inning in any of his spring training outings) to stick as a starter. As I’m writing this, he has a sweet two-start matchup on tap with the Giants at home and the Rangers in Texas. Present you and future me will have the advantage of knowing how Morejón did against San Francisco. Present me (which is now past me, as you’re reading this) would leave him on the bench in anything but an NL-only or deep mixed (think 18 teams), but if you’re not worried about wins and are just making a strikeout play, go for it.

We had our initial FAAB run on Wednesday night in Tout, so it was a quieter week than usual. I bid $53 on Valdez but otherwise stood pat. With Merryweather and Bryan Garcia already in the fold, I’m not pushing particularly hard for saves.

Tout Wars allows teams to carry two active DHs, so Mercedes’ positional limitations matter less here. There were only two bids in LABR AL because of their 10-game positional requirement from 2020, as eight teams were already locked in at DH.

McCormick could see some short-term run if Michael Brantley (wrist) needs to go on the IL.

Perdomo is up for the Diamondbacks and should play short with Nick Ahmed on the IL with right knee inflammation. You can read Jeffrey Paternostro and Mark Berry’s sublime thoughts on Perdomo here. In the short-term this is mostly a steals play, as Perdomo can fly on the basepaths. It’s unlikely that this is a long-term solution, but if Josh Rojas continues to struggle, perhaps Perdomo can slot in at second base.

Naquin started the last two games for the Reds, thanks to a minor Nick Senzel injury and a Jesse Winker illness. It was announced today that Winker has the flu and not COVID, so Naquin’s value is extremely short-term.

You need to be logged in to comment. Login or Subscribe
PHIL
Cesar V. might be a little firmer in Hyde's mind - he did get final 3 Orioles SV's of 2020. Some Doug Jones for a new generation potential for however long it lasts.
Reply to PHIL
Mike Gianella
it's possible. I hate trying to predict what's going to happen in bullpens in 2021.
Reply to Mike