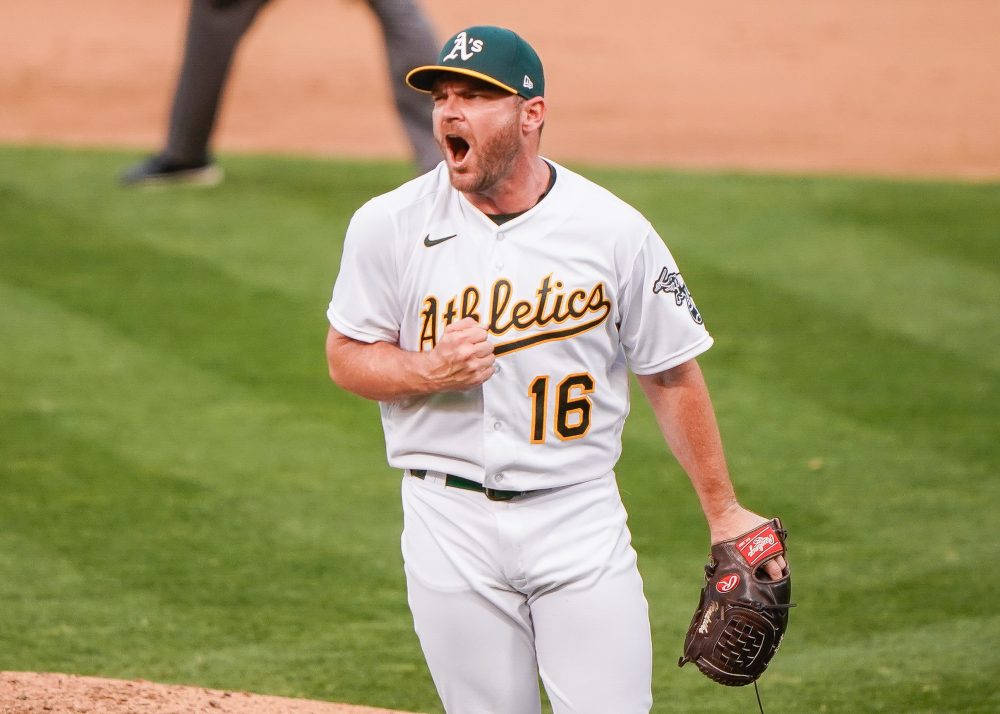 An Open Letter to the Tout Wars, LLC

First, I hope you and your loved ones are all safe and healthy. I missed seeing you in person in Manhattan in March. Tout Wars weekend is one of my favorite fantasy baseball events of the year. Yes, I’m sad that we couldn’t hold the drafts in person—they didn’t have quite the same flavor online—but I primarily missed spending time with our fun and knowledgeable community. Being home meant that I could sleep in my own bed, and it admittedly was nice not having to sit on a crowded NJ Transit train for an hour and fifteen minutes. Of all the minor inconveniences that we’ve endured in 2020, however, this was one of the worst.

I’m writing this letter to discuss a rule change you made this past offseason, the strategy I employed because of this change, and why I think that you should either revert to the old rule or, at the very least, modify it to fix the problem you were trying to address without compromising the integrity of our game.

But I’m getting ahead of myself.

In 2019, one of the competitors in Tout AL noticed that he was in danger of not meeting the league’s minimum requirement of 950 innings pitched. He needed to obtain more starters to get there. In some expert leagues, like LABR, your finishing position has no bearing on next year’s contest, outside of some mild ribbing and taunting. In Tout Wars, you lose $10 in FAAB (out of $1000) for every point you finish below 60. In a mixed league, this competitor simply could have grabbed free-agent starting pitchers of every stripe to meet the IP requirement. In an AL-only league, there are weeks where only one or two free-agent starters are even available. He knew that he needed to make a trade.

But instead of reaching out to everyone via email or the league message board, diligently shopping his hitters, he hastily made a trade. I don’t need to get into the particulars. What’s important is that it was a lopsided deal to one of the teams near the top of the standings, and members of the league didn’t like it. They disliked it so much that a protest was lodged to have the trade overturned.

The protest didn’t work. You sent the league a respectful email saying that while you agreed that the deal was imbalanced, the rules about the innings minimum and the FAAB penalty made the trade legitimate. You also noted that the innings minimum, which was a relic of the original constitution in 1998 when Tout Wars (and many other leagues) used eight categories instead of 10, was something that you were strongly considering removing in the future.

I mostly forgot about all this until this past February, when I was preparing for Tout AL. I was putting together my bid limits and looking for Tout’s rule on Shohei Ohtani’s eligibility when I noticed that you had, in fact, changed the rule and abolished the innings limit:

DELETE FOR 2020: Each AL and NL only roto league team is required to attain a minimum of 950 innings pitched in order to qualify for placement in the pitching categories of Baserunners Ratio and Earned Run Average, and a minimum of 4,200 At Bats for placement in the category of On Base Percentage. If these minimum levels of playing time are not achieved, the team will receive 1 standings point in those categories affected no matter where they finish. Every other team that meets the minimum requirements will receive their normal standings points (Category standings will not be artificially adjusted to accommodate a team that falls short of a playing time requirement.)

I wondered if I could use this loophole to my advantage and field a team with nine relievers. You can read my rationale from my draft recap in March. The idea behind the strategy is that while throwing two categories overboard is risky, it maximizes your ability to finish first in the other eight.

It didn’t work. Even so, I suggest that you change the rule again in 2021. 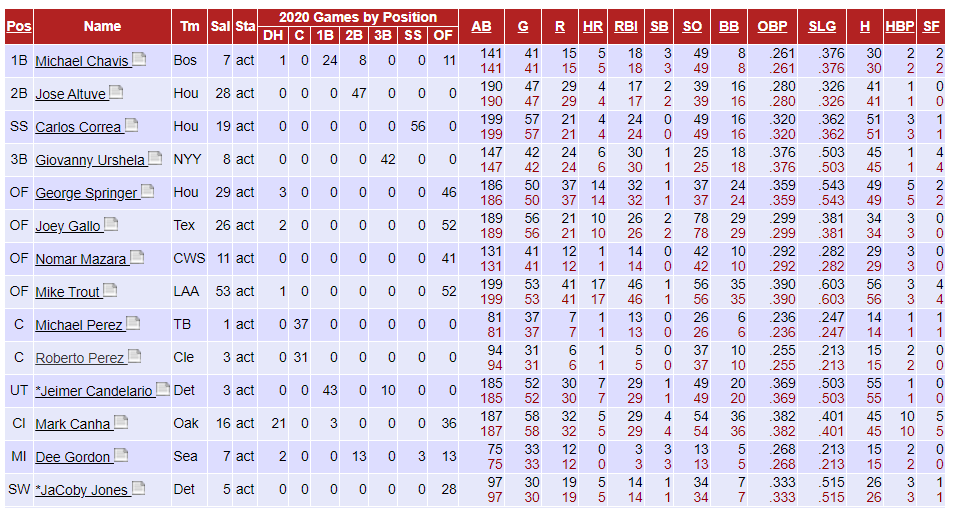 This is the offense that I put together on Saturday, March 14 (the statistics are through Saturday’s games, as I have a deadline to meet). I had some bad luck, but everyone has some bad luck. I also made a lot of mistakes. I didn’t obtain enough speed, and I knew that right away. For a team on which I planned to spend $220 out of my $260 on offense, I should have budgeted more for stolen bases. And catchers. When you’re attempting to blow the doors off in five offensive categories, having two high-end starting catchers is nice. It might sound weird, but I would have felt better had I spent a combined $36 on Mitch Garver and Gary Sánchez. Process versus results and all that.

But the funny thing is that even with all the stupid mistakes I made, my team put up a solid showing in the non-SB offensive categories. I finished third in OBP and runs, fourth in RBI, and fifth in home runs. I didn’t come close to winning. I finish fourth overall, but I was fighting for second place all year, mostly because finishing with 38 pitching points and dumping innings is like shooting fish in a barrel. 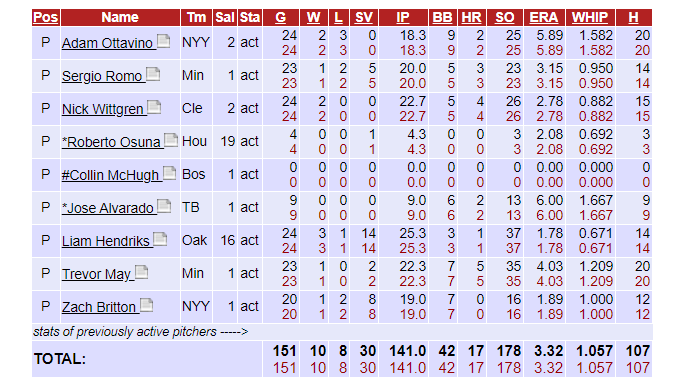 These are the nine pitchers I drafted. Britton was lucky, but Osuna’s injury was unlucky. When you are at liberty to draft nine relievers, you can take low-end chances on saves all season, which is exactly what I did. It helps that Hendriks was the relief ace that I thought he’d be, but if I’m going to beat myself up for the mistakes I made on offense, I’m going to give myself credit for the great call I made on Hendriks. I didn’t quite get to 38 pitching points—I was two points short in WHIP—but I believe that a full 162-game slate would have evened things out on the pitching side. I believe that I would have picked up those extra two points.

Perhaps a 60-game season in which players abruptly landed on the IL and entire series were wiped off the slate isn’t the best gauge of whether this rule change was a good idea. Some analysts I talked to after the draft believe that the short season worked to my advantage, and that a typical season would have made it even tougher for me. I’m not so sure. Still, I’m less concerned whether my plan could have worked better had I done a better job, or if it would have worked over a full 162 games, and I’m more concerned with the idea that the ability to toss innings aside in a Roto format isn’t good for Tout Wars.

It’s quite possible that younger fantasy players don’t believe Tout Wars is as relevant as it was when I joined your ranks in 2010. I was an excited blogger who lived and breathed fantasy baseball, particularly the old-school Roto style that Tout embraced. Point leagues have overtaken Roto formats in popularity, and maybe fantasy players don’t use Tout as a measuring stick the way I did … and do.

However, if Tout is supposed to be a helpful guide for old-school Roto players, eliminating the innings requirement is not an accurate reflection of how many of us play the game in our home leagues. Plus, if someone smarter and savvier than myself decides to try this strategy in 2021, someone will win a title with nine relievers. This, in my opinion, compromises the integrity of our game.

On the other hand, I do recognize and appreciate what you were attempting to do when you changed this rule in the offseason. It has become more difficult to obtain innings in deeper leagues due to the way major-league teams use pitchers. A 950-inning threshold might be an antiquated notion, and penalizing teams for struggling to reach this threshold even when they are trying to compete does seem unfair.

A compromise to this dilemma might be a lower innings requirement, like 750-800 innings. This would not only put teams in a position where they would need to carry starting pitchers but also it wouldn’t force them to roster bad starting pitchers just to meet the requirement. It would also allow for some strategic maneuvering around the value of starters versus relievers, something that comes closer to reflecting the modern realities of the real game.

Another idea: Bring back the 950-inning requirement but realign the number of hitters and pitchers that each team carries. Tout Wars currently has a roster alignment of 13 hitters, nine pitchers and one “swing player” (a slot that can be used on a hitter or pitcher). But even with this swing player, the rules haven’t adjusted to the reality of the modern game, where most major-league teams carry 13 pitchers on a 25-player roster. Adding more pitchers and/or reducing the number of hitters that we can carry would be a more accurate reflection of major-league rosters, and it would also make it easier for teams to meet the innings requirement.

While it was fun to attempt to exploit a loophole, I hope that I am not permitted the opportunity to do so again. Our fantasy game should try to mirror the real game to some degree, and the zero-inning requirement fails miserably in this regard. I hope that you will consider bringing back the minimum innings requirement, or at least some version of it, in the future.

As always, thank you very much for allowing me to continue to participate in Tout Wars and compete with the best of the best in fantasy baseball. I hope that we can see each other again safely and in person next March.

All my best,
Mike Gianella

You need to be logged in to comment. Login or Subscribe
Alexander Bensky
For what it's worth my league, Al-only, entering its thirty-fourth year next season, 5x 5 (H instead of K), has simply added a tenth pitcher.
Reply to Alexander
Mike Gianella
We did that in my home league too. I still think the IP requirement needs to be lowered.
Reply to Mike