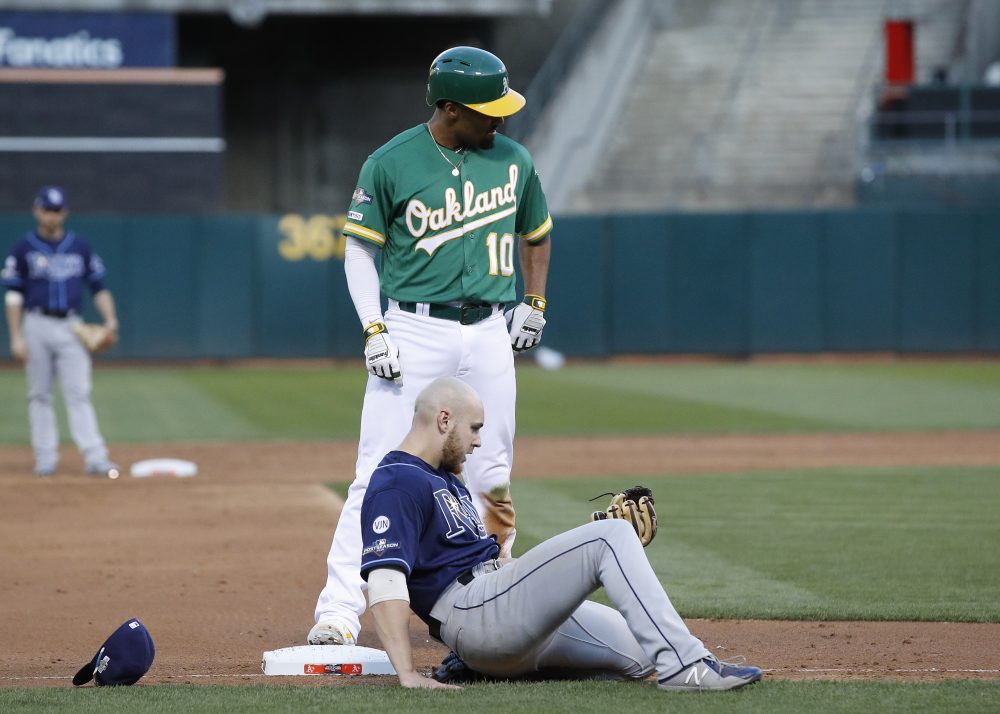 Early in the morning of February 17, we began the draft for the second year of the Tout Wars Draft and Hold league. After 50 rounds, and 750 players taken (well, 749, counting Shohei Ohtani twice), we wrapped up the draft on Tuesday, March 10. (Mr. Irrelevant, if you must know, was Yimi García of the Marlins.) On Thursday, March 12, Major League Baseball announced the two-week postponement of the start of the regular season. Given the subsequent spread of, and public response to, the COVID-19 pandemic (and that, on Sunday, the Centers for Disease Control advised against gatherings of more than 50 people for the next eight weeks), it now appears that the delay will be measured not in weeks, but in months.

All of this makes reviewing a draft a very odd experience, equal parts indulgent and insignificant. But even as we lament the absence of baseball, our minds can still cogitate on the “fantasy” part of the whole endeavor. And while this draft exists in amber—in a moment where we had certain assumptions about injury recoveries, innings limits, and position battles—the delay inevitably changes some situations, whether we start in late April or (as is much more likely) sometime in June or July. These changed circumstances have made some players more, and some less, valuable. With these disclaimers, let us proceed to my…

When I look back on my 2019 draft, and subsequent seventh-place finish, I’m struck by how I managed to float near the upper reaches of the standings for most of the season despite some frankly disastrous picks.

My disasters were easy to spot: José Ramírez with the third-overall pick set me back a good deal with his disastrous start, and then my top-two starters were injured and inconsistent (Blake Snell) or just plain injured (Jameson Taillon). One area that was less disastrous was the rest of my starting pitching: I drafted mid- and late-round starters in bulk, ending up with bargains like Charlie Morton, Matthew Boyd, Hyun-Jin Ryu, and (surprisingly) Jeff Samardzija.

Going into this draft, I wanted to replicate this bulk-starters-late approach, but I felt like the uncertainty near the top of the market dictated grabbing an uber-elite ace (really, deGrom or Cole, for me). So when I had the fifth choice in picking my draft slot (based on the order of finish for returning members), I chose the fifth pick, reasoning that the top three were etched in stone. Then, even if one of my two preferred pitchers went at four, I would still end up with one of my aces (which I did, with deGrom).

In last year’s draft, I think I over-weighted the importance of OBP; this year, my approach was to be mindful but not obsessive. I didn’t want to short-change other offensive categories in my quest for on-base studs. The bulk of my offense has a stable OBP floor, with the worst of my starters around .330, even if I don’t have many truly elite guys at the category.

And, finally, speed. As this is a stand-alone rather than overall contest, I feel comfortable aiming for middle-of-the-pack in steals. My goals were to get early speed wrapped up with other categories, and then selectively add 10-20 steal players periodically through the draft. If none of those players came to me, I would simply bulk up in the other categories.

And now, my roster, broken down by position (with additional position eligibility in parentheses). Keep in mind that Tout Wars only requires 15 games at a position to gain eligibility for the following season.

In OBP leagues, Grandal vies with J.T. Realmuto and Gary Sánchez for the top spot at catcher. Even if his plate appearances were projected to decrease from last year’s career-high of 632, he is still likely to finish among the top three or four catchers for trips to the batter’s box. Locking in four-category production from a catcher is rare, and it’s worth it inside the Top 100. Chirinos is also a strong OBP performer with a locked-in starting job in Texas. Getting him in the 22nd, ahead of the truly dicey second catchers, was a minor, but helpful, draft win.

The backups are a mixed bag. Bart should be in San Francisco at some point this season, and if the reason is “Buster Posey is injured again,” he could be pressed into something like a 50-50 role, if not more. McGuire is a decent hitter at least (I may have made a joke in the chat room about him being “exposed” this year, but this is not verified). He’s probably the backup to Danny Jansen, but Jansen himself had his struggles as a hitter last year. Kiner-Falefa could be the real coup: No longer catching but still catcher-eligible, he was parlaying a red-hot spring into a strong chance of making the Rangers’ 26-man roster and a possible part-time role at third base.

I waited on a first baseman, and I was lucky enough to get one of my “backstop” options at the position (i.e., if I miss out on the elite players, this is the last one I feel could perform at that level in 2020). I grabbed OBP stud Eric Thames deep in the draft, as he should be a long-side platoon, at worst, in D.C. Ford is a backup play to Voit, and he showed strongly in limited 2019 time. If the injuries to Aaron Judge and Giancarlo Stanton linger, Ford could see some time at DH as well. Vaughn is purely a spec play, as it’s unlikely that he sees the South Side until September at the earliest. It’s plausible, however, that an early injury to José Abreu or Edwin Encarnación, plus a hot start on Vaughn’s part, could accelerate this timeline.

For my roster, there are other first-base options in Grandal, Jeimer Candelario, Marwin González, and possibly Seth Beer, should injuries or poor performance require a spin of the positional roulette wheel.

Second base is admittedly a bit patchy, as it’s possible that none of my nominal keystoners earn a starting job. I feel enough confidence that La Stella and Dubon will at least get to 75 percent work, with Dubon likely earning outfield eligibility as well. Hampson is not a pick I love, but on the small chance that he earns everyday playing time (which would likely require an injury), he could establish a 30-stolen-base pace with ease.

I love Moncada this year, as I’ve stated both on the podcast and in the “Third Basemen to Target” piece. All the skills are in place, and the batted-ball and sprint-speed profiles hint at more power/speed upside to come. Candelario was a “hey, this guy is probably starting and his OBP isn’t terrible and it’s the 35th round eat at Arbys” kind of pick. He was kind of a prospect, and in a dismal Tigers lineup he’s in the ideal situation to take some steps forward this season.

One of the reasons that I was okay with going short at second base was my drafting of two shortstops in the first eight rounds. I don’t necessarily believe in the 30 home-run power of either Bogaerts or Semien, but I do believe that they’ll fill the stat sheet in all five categories. Semien was not part of my plan, but he kept slipping and slipping until I couldn’t let it pass any further. Both players, it should be noted, lose some value with a shortened season, as they were among a small number of players who could reasonably be expected to approach 700 plate appearances in a full season (Semien hat 747 last year, Bogaerts 698).

Iglesias, like Candelario, is in that eternally undervalued category: everyday player on a bad team. Last year, I drafted Orioles “starting” shortstop Richie Martin; I feel much better about my token Baltimore infielder this year.

I’ll be honest: Marte was not what I wanted in the second round. Targets like Bryce Harper, J.D. Martinez, and Anthony Rendon were long gone at this point, and rather than pay last year’s markup on someone like Rafael Devers, I went ahead and grabbed a multi-category player with speed in the new D-Backs leadoff hitter. His OBP (career .341) isn’t quite the anchor you want, and his age (31) is mildly concerning, but the well-rounded profile allowed me to pivot in a number of directions with my subsequent offensive picks.

I do think Soler will regress, but even if that regression is a .240 average with a 35-homer pace, this will be a good value. I drafted Calhoun several days before he was hit in the jaw by a Julio Urías fastball; the delayed start could mean that he doesn’t miss much, if any, regular-season time. I’m especially bullish on Happ this year, who, like Yoán Moncada, benefitted from a more aggressive approach at the plate, particularly on early counts. Heyward is full BOGWAJ, but that’s just fine for an OF5.

Among the backups, I’m most intrigued by Pache, who is likely to see time in Atlanta before the summer is out. His all-around game, but particularly his speed, could add some instant fantasy juice in 2020.

I really like getting deGrom and Morton as my top-two starters. Both have elite strikeout rates and ratios, and while Morton’s age is a pale yellow flag, I think that he’ll be worth this pick—even if he only pitches on a 160-inning pace. Rodríguez is someone about whom I’m less thrilled, but with a strong top two, I more or less wanted an innings-eater type for my SP3. Rodríguez fits the bill and, though it may not be predictive, has averaged 16 wins over the last two seasons.

My next two pitchers are bets on upside, with Urquidy feeling a lot more stable than Puk, even before the latter was sidelined with a shoulder strain in early March. Stripling could pan out with a trade (hey Angels, wyd?) or an extended run as a starter for the Dodgers.

It gets less exciting after that: pitchers who are either confirmed starters (Samardzija, Turnbull), sixth-men with some skills to do well in extended run (Hernández, Kelly), or, uh, Trevor Cahill. The Cahill pick was in part motivated by the likely end to Tyler Beede’s season, after he was diagnosed with a UCL sprain practically minutes after I drafted him.

And, finally, the relievers. Jansen was by no means a target, but I came on the back end of a run that included Taylor Rogers, Edwin Díaz, and Nick Anderson. Jansen, fatigued and ineffective for stretches of 2019, had a strong start to his spring before last week’s shutdown. I went a little above ADP for Jiménez, who I think is a relatively secure, if low-ceiling, second closer option.

My other relief arms were either oriented around backing up Jansen (with Graterol and Treinen) or speculating on role changes in potentially unstable situations. Oberg seems a logical heir apparent to the deteriorating Wade Davis, while Stephenson could easily take over for a shaky Raisel Iglesias. And while Taylor Rogers seems ensconced as the main ninth-inning option in Minnesota, Twins skipper Rocco Baldelli is non-traditional enough to use Rogers in non-save situations.

There are a lot of things that I like about this team, though for the foreseeable future it remains purely hypothetical. Here’s hoping that, even in a shortened season, I can appreciate what these 50 players do on the field, rather than in the shadowy, abstract world of draft analysis.