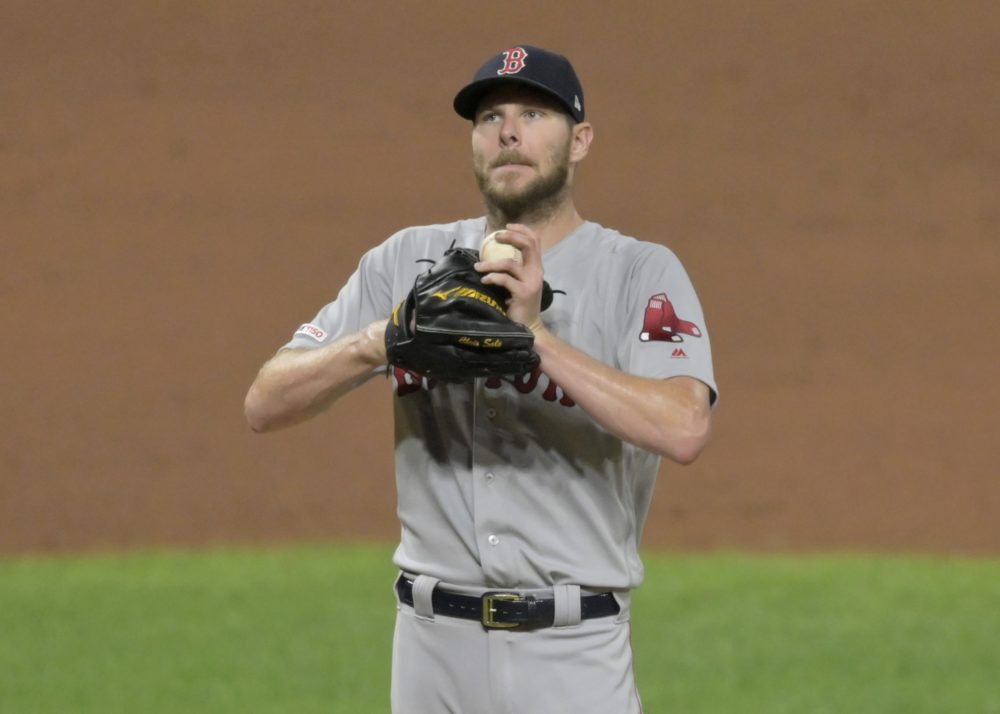 Each year that I’ve been in LABR (League of Alternative Baseball Reality), I’ve released an article recapping my draft/auction within a couple of days from when the team was completed. While it’s easier for me to write it when it’s fresher in my head, I decided to change things up this year. I wanted to give more of a delayed perspective as we head into the peak of draft season over the next two-plus weeks. A day after an auction, you feel good about almost all of your purchases, as you’re still embraced by the glow of the spreadsheet telling you how much “value” you got. A week after an auction, well, that’s a different story.

My team suffered some major injury news within 72 hours of the auction being completed, and I’ve gone through my share of ups and downs since it broke. Let’s go to the videotape to see how I’m coping:

Saturday, 2/29/19 – I purchased Chris Sale at auction for $25. I’m feeling very good about this, as he’s just going to be sidelined for a couple of weeks to start the season. He’s just getting a late jump after having pneumonia. A healthy Sale is a $35 pitcher. This is the kind of discount that I needed in order to take him.

Tuesday, 3/3/19 – He has elbow soreness. He’s going for an MRI. He’s consulting with Dr. James Andrews. Everything is dark. I eat a very unhealthy lunch and regret it the rest of the afternoon.

Wednesday, 3/4/20 (early) – They’re sending the results to another doctor. He’s done. I need to buy a metric ton of bubble wrap in order to put my other pitchers in it. Someone please direct me to Reynaldo López’s locker.

Thursday, 3/5/20 (late) – I open Twitter to find Ken Rosenthal’s tweet, and at first I completely glossed over the word “not,” which DOES A LOT OF WORK HERE. Actual tweet: “Sale is not expected to require Tommy John surgery at this point.” I convince myself that I can still get 120 innings from him. The world is back in order, slightly.

Friday, 3/6/20 – It’s a flexor strain, and he should be back by Memorial Day. I don’t want to count on it, but at least there’s a chance that his absence won’t torpedo my team.

Saturday, 3/7/20 – Danny Duffy just threw four scoreless innings and struck out six in a spring training start against the Reds. I know that I shouldn’t be looking at spring training stats; this is Danny Duffy, after all. But you know what, I only need one left-handed starting pitcher on my team to strike out 200 batters. WHY CAN’T IT BE HIM INSTEAD?

Sunday, 3/8/20 – *calls Mike Gianella* “I fell off the wagon. I’ve been looking at spring stats again. But it’s all Chris Sale’s fault! [long pause] Ok fine, I am responsible for my own problems. Thanks for talking me through this.”

It has now been nearly 10 days since the reserves were distributed in the AL-only LABR auction, and it hasn’t quite been as much of a roller coaster ride for my team as a whole as it’s been for my singular and divisive Chris Sale purchase. The additional week has given me a little more clarity around my team, its strengths and weaknesses. Long-time readers know me well enough by now to understand that you shouldn’t expect 2,000 words about how great my auction went and what a juggernaut I built. If I ever turn into that guy, please promise that you’ll tell me before you just stop reading entirely. Thanks.

As it was last year (and likely years before, but this is just my second AL LABR auction), the room was filled with different strategies, but one single thing united the lot of my competition: They’re just all really damn good at this. When you have 11 other extremely smart people implementing various strategies—from the defending champs (Colton and the Wolfman) throwing down bank on offense early, to Larry Schechter constantly lingering in the middle and endgame and hunting for value—the margin for error is very small. You need to trust your valuations that you poured over before you touched down in St Pete.

In terms of overall strategy, there were only a few things that I was specifically cognizant of before the auction that I wanted to try and abide by:

How did these work out for me? We’ll do a quick dive into each.

This ended up being easier to put into effect than I had thought, mostly because I bought two pitchers above this range: Chris Sale at $25 and Mike Clevinger at $20. It had a few longer lasting effects, but first, a quick word about injured pitchers. It’s okay to buy injured pitchers (or injured players as a whole), as long as the value is right. There’s not a small subset of experts and writers who will tell you to avoid injuries because they’re going to find you anyway. While that’s not an incorrect idea, the implementation of it often is. What you should be doing is taking a player who is injured, drawing up a conservative outcome for them, and pricing them out in value so you don’t miss out on a bargain if it’s there for you. I had healthy versions of Sale and Clevinger valued at $35 and $31, respectively. If I think a healthy version of Clevinger gets 180 innings and am projecting him for 150 innings (a May 1 return with a few missed starts throughout the year), he becomes roughly a $25 pitcher. In an AL-only league, you have to dock him another dollar or two because of the quality of replacement you’d have, but regardless of format, there’s a right price for him and $20 was certainly it. I’m not risk averse, if you can tell.

So what happened to the rest of the mid-range group, and how do they compare to the less expensive pitchers? Here’s a full list of starters who went between $15 and $19 in LABR:

The pitchers who went in the $6-10 range included Jake Odorizzi, José Urquidy, Dallas Keuchel, Reynaldo López, Ryan Yarbrough, Yonny Chirinos, Lance McCullers, Aaron Civale, and Josh James. Sure, the top group are the sexier names, but how much do you really trust any of them? Of that group, I took Urquidy and López at a combined $13. I really like both from an upside perspective in 2020, and they should realistically get at least 160 innings apiece.

My biggest regret from implementing this pitching strategy is that I bailed out on getting a proper closer in order to ensure that my offense was very competitive across the board. A couple of guys went for very good prices, including José Leclerc at $11, Brandon Workman at $10, and Alex Colomé at $9. I probably still should have gone the extra dollar on one of them anyway, but they can’t all be good decisions after all.

GETTING A RELIABLE SPEED GUY

This one will be quick. The player I was hoping to get was Adalberto Mondesí, and I got him for $33—my exact price. Yes, the shoulder is a question mark, but even if he misses a month of the season, he could still steal 40 bases. There will be no one giving him the red light in Kansas City. Who else actually has that kind of upside in the AL? Someone like Whit Merrifield, Francisco Lindor, or José Ramírez could steal 30 bases, but getting to 40 would be a pretty big shock for any of them. Mallex Smith has an outside shot, but he’d have to play regularly all season to get there. Even if he did that, he’d likely hurt you in three out of the five categories. It’s tough sledding for speed these days.

SPEND EARLY ON A HITTING BASE

Roughly 20-25 minutes into the auction, I had spent nearly $100 on three offensive players, and I was pleased. I had all three of them within my top-10 hitters. Mondesí was mentioned earlier, but my first buy of the day was Alex Bregman at $34. He was the first Astro to get thrown out, so some owners were just sitting back and waiting to see what the team discount would be. For those who read Baseball Prospectus regularly, you’re probably not surprised to know that I wasn’t discounting Houston players much in 2020. The reason why I slid them down a little was not because the cheating scandal helped them a ton, but because I thought the scandal could take a bit of a toll on them (either mentally or physically with a few extra bruises). Without the scandal, Bregman was worthy of a high-30’s bid, so the discount was there and right for the taking. Finally, I got another middle infielder in Xander Bogaerts for $27 and was pretty surprised that he didn’t go for a number that started with a three.

The end result of spending early on middle infielders and my two injured starters was that it left less money for first base and the outfield. But, fortunately for me, outfield was the place with the best bargain shopping during the auction. I felt that I was able to grab enough stats in there with my limited budget to round out my roster well. Overall, I spent $39 on my outfielders and ended up with Mark Canha, Brett Gardner, Anthony Santander, JaCoby Jones, and Clint Frazier. We’re talking about a couple of upside picks and a few big-PT guys who are underrated because they don’t have a ton of helium.

In the end, I’m still relatively pleased with how the auction went, although I’m still coming to grips with the daily mood swings caused by Chris Sale news blurbs. In my second year of AL LABR, I had a better feel for the room overall, and I was able to take better advantage of the rules in the auction. It can’t be overstated how important it is to do both of those things. The former helps when deciding when to throw out players, whether you’re looking to sneak someone through inexpensively or looking to clear some money out of the room. The latter helps when you’re planning strategy, and a great example of that was how I approached stashing prospects with potential 2020 arrival dates.

In LABR, you’re allowed to freely move players who you draft in the reserve rounds between your active lineup and your reserves, but if you purchase a player in the active portion of the auction, you can’t reserve them. If you want them out of your lineup, you’ve got to cut them. Last year, I grabbed a few prospect stashes in the reserve rounds but lost flexibility with how I was able to manage my roster in-season. This year, I wanted to grab a few prospect stashes at the end of the active portion for two reasons: (1) I’d have more from which to choose, and (2) I figure that I’m going to play them once they get called up anyway, so they don’t need the flexibility that the reserve spots bring. I grabbed Casey Mize and Andrew Vaughn in the endgame of the active phase, and I grabbed all major leaguers in the reserves, hoping to capitalize on that flexibility.

Will it work? That is why they play the games. My full roster (with prices) is below: