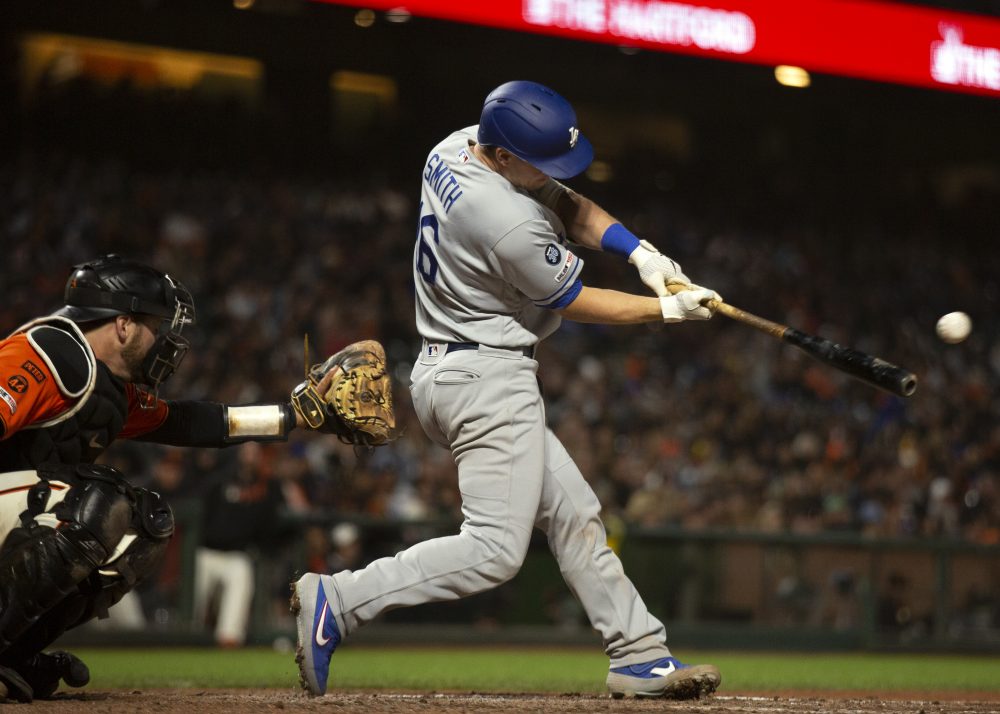 Some of you will look at the headline of this article and choose not to read it. This subsegment of Baseball Prospectus readers will mutter to themselves, “Expert/industry recaps are boring. They’re nothing but navel-gazing, and they aren’t instructive or helpful for my leagues.” It’s possible that they’re right. However, I write these pieces for two reasons. First, I get something out of the better expert-league recaps. They help me to see what worked and what didn’t work. Second, and more importantly, these articles are about accountability. It’s easy to write the fun recap when you win and take the happy victory lap, but I also owe it to my readers to explain what happened when I didn’t win, to explore where my analysis might have failed.

The 2019 season marked my second consecutive year at NL LABR, a live auction that takes place during the first weekend in March in Phoenix, Arizona. I thought I had a good auction but didn’t believe that I had hit it out of the park. I liked the top half of my offense and pitching staff but felt that my team had too much of a Stars and Scrubs approach, particularly in the outfield.

I didn’t offer a prediction of how I thought I’d do, but if I had to have guessed, I would have assumed that I was going to finish in the top three or four but not have a chance of winning. Sadly, my guess turned out to be correct. 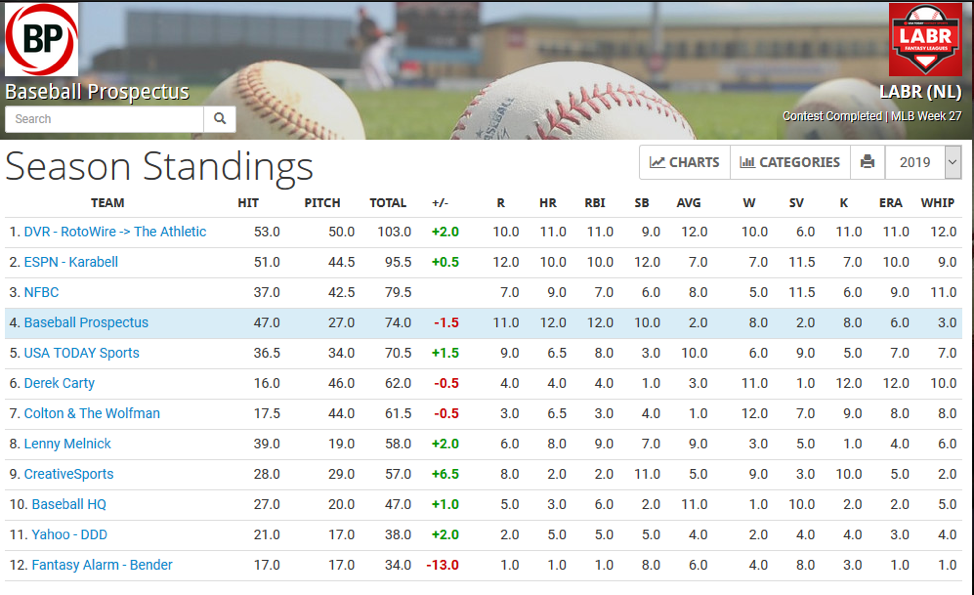 Congratulations to Derek Van Riper of The Athletic for coming back from a 19-point deficit in mid-May to win his second NL title and third title in LABR in the last five years. Kudos as well to Eric Karabell of ESPN, who finished in second place for the third time in five years but is still waiting to win his first championship.

As you can see in the screengrab above, I did very well on offense, even accounting for my lousy batting average. But it wasn’t because my auction was great. While I hit big on one player, there were significant holes on my offense coming out of the gate.

My biggest problem on offense was Aguilar, who started out badly and never recovered, even after he was traded to the Rays (the valuation above counts his AL stats, since LABR counts them too). But the bigger problem on offense was getting virtually no production from four outfielders. In retrospect, I was too optimistic about Schebler and Cordero, but I was expecting something from all the non-Cespedes outfielders, not a combined $0. Alonso, Acuña, and Albies were an amazing foundation, but they couldn’t do it alone, especially since I didn’t have much profit on my roster beyond Alonso. No, it took some strong offensive acquisitions in season to push me near the top of every category except batting average.

Ranked in no order, this is how I went from having an average offense to a very good one.

1) Shored up my catching

I didn’t expect my Gomes/Avila to be world-beaters at a combined $6, but I also wanted more than $9 combined of production. It took some trial and error, but I eventually landed on Will Smith and Kurt Suzuki (after the latter was inexplicably dropped). The duo combined for 22 home runs, 65 RBI, and 48 runs in 300 at-bats after I acquired them.

Admit it, you didn’t know who Tommy Edman was coming into the season. OK, I’ll admit that I didn’t know who he was either. I didn’t pick Edman up with the thought process of “the Cardinals invent these guys out of whole cloth, so he’s a surefire $10+ earner,” but my stab at production gave me a nice power/speed combination down the stretch. Acuña’s 37 steals weren’t quite enough to loft me near the top of steals, so Edman’s 13 steals while he was my team were enough to add a few points.

3) Small trades for even more speed

Once it was apparent Alonso wasn’t a fluke, I identified that I could add even more speed on the margins to help my team. I quickly cut my losses with Kyle Freeland in April, flipping him for Gerardo Parra, and around the All-Star break moved Corey Seager for Dexter Fowler. Neither ran quite as much as I would have hoped, but those 10 steals made a difference.

Your goal in a 12-team 5×5 is 50 points on offense and 50 points in pitching. I came close with my bats, but my lack of average was a significant source of frustration. This was one problem with trying to fill multiple holes on offense on the fly. I did it very well, but batting average is an extremely difficult category to add, and I didn’t have that many strong AVG candidates with which to begin. It didn’t help that some of the players I added, who I didn’t mention above, were complete failures.

Still, if I had put together a pitching staff with the same success that I cobbled together an offense, I would have won easily. Sadly, it didn’t come close to working out this way.

It wasn’t my plan to spend $75 on my pitching staff in both 2018 and 2019, but it’s worth looking at how fine the difference is between $70 in earnings and $112 in earnings. I didn’t have an ace on either staff, and my front four in 2018 of Chacín, Teherán, Arrieta, and González was comparable in earnings ($49) combined to 2019’s front four of Wheeler, Thor, Matz, and Lester ($50). Of course, the core of my 2019 rotation cost $56 compared to the $34 that I spent in 2018. That $22 difference bought me Brad Hand and Josh Hader last year, and there’s your ballgame. Lugo was a nice profit-center but didn’t get enough saves to help me in the category, and C-Mart came back too late to help much, even if I hadn’t traded him in late July for Teherán.

The biggest problem was the awful back three of Conley, Freeland, and Wood. I cut Conley and traded Freeland (see above) quickly enough but struggled to find the arms that I needed to fill the gap. LABR doesn’t permit teams to reserve pitchers purchased at auction, which made Tanner Roark (who I grabbed on reserve) a solid but unspectacular piece (he earned $8). The C-Mart-for-Teherán trade looks terrible on paper outside of league context, but his wins made a difference, and getting a quality starting pitcher via FAAB was next to impossible this season.

The LABR mono leagues have a six-round reserve draft, which explains some of the starting pitching dearth. Max Fried, Jordan Lyles, Zach Davies, and Adam Wainwright were all taken in the reserve rounds. But most of the reason this list is so lousy is because there weren’t many starting pitchers called up from the minors or traded from the other league who offered much help. A decent showing from Trevor Bauer obviously would have changed this list somewhat, but the story here is a thin list. If you don’t buy good starting pitching at auction, you’re out of luck during the season.

Most of my failure in LABR NL came on the pitching side. My two biggest mistakes were not buying a second closer (especially given how cheap they were) and wasting three slots on pitchers who did nothing or less than nothing for my team. The lesson isn’t to spend more on pitching, either. Spending $75-80 is fine, but I need to distribute more of that money to relievers to lock down not only saves but ratios as well, and let the chips fall where they may with my rotation. Maybe I don’t get the 2018 version of Chacín, but I would have been better off going cheap and hoping to get a lottery ticket instead of buying three Mets and settling into pitching mediocrity.