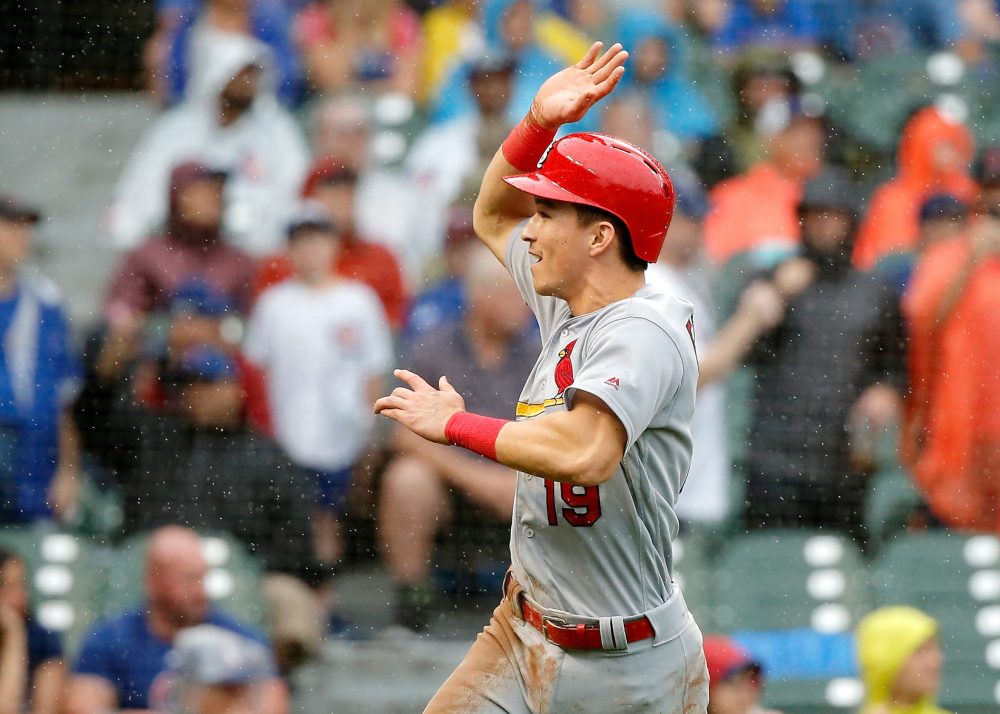 Every weekday throughout the postseason, the BP Fantasy Staff will profile at least one player who will be in action on that day, discussing their early professional years before recapping their 2019 season and looking ahead to 2020 and beyond.

Stop me if you’ve heard this St Louis story before. Edman was a sixth-round draft pick who progressed steadily through the Cardinals organization without ever dazzling. He never made it onto any of BP’s Cardinals prospect lists, and with a significant absence of power, his only potentially standout fantasy tool was his speed. Edman reached 30 steals in 35 attempts across two levels in 2018.

Real-life opportunity was still a problem. There was no guarantee that Edman would be anything more than a bench bat, unless he really started to hit. The new ball at Triple-A added some extra intrigue to Edman’s profile, as he matched his career high in home runs in just a third of a season. The Cardinals summoned him to the majors in early June to figure out if he could do the same at the highest level.

It turned out that he could. Edman almost exactly replicated his Triple-A performance, slashing .304/.350/.500 over 349 plate appearances. The hit tool played at the major-league level and brought 11 home runs with it. He produced a 110 DRC+ that was right in line with his offensive success at the higher levels of the minors. His above-average strikeout rate held up against big-league pitching. Most importantly for fantasy, the base-running value really emerged.

Edman went 15-for-16 on the basepaths and ranked inside the top 30 in Statcast Sprint Speed. His 12 steals in the second half ranked ninth in baseball. His impressive baserunning and on-base percentage helped him to score 59 runs, putting him on a triple-digit pace over a full season. He also worked his way into the first or second spots in the lineup on numerous occasions and proved his worth as a multi-positional asset, accumulating double-digit starts at second, third, and right field.

It wasn’t all plain sailing offensively. Edman had a sub-.700 OPS as late as August 15. Even his season-ending .850 OPS is less impressive than it might have been a few years ago, and Edman got a little fortunate in DRC’s estimation. While 11 homers makes Edman more fantasy-relevant than the low single digits he put up early in his pro career, it’s still not much of a difference-maker in a league where a massive 129 players hit at least 20 home runs.

His approach also wasn’t particularly impressive. His chase and contact rates were not as good as one might expect from a player with Edman’s profile. There was a lack of consistency in his role, both in terms of position and lineup spot, that creates a certain level of uncertainty going into 2020.

That uncertainty cuts two ways. On one hand, if Matt Carpenter bounces back, there isn’t a spot for Edman to play in the infield, and he may be stuck as utility-only. A sluggish stretch could easily see the Cardinals simply turn to the next product of their impeccable player-development system. On the other hand, Edman has clearly earned some trust as a versatile option, and he now has multiple routes available to him for playing time. He’ll also open 2020 with second-base and third-base eligibility, and he will likely add outfield back to that eligibility list if Mike Shildt uses him similarly.

In the present stolen-base environment, a player with 25-plus steal potential is worth consideration, almost regardless of how well they hit. There are plenty of reasons to believe that Edman can sustain at least a league-average performance at the plate, including his strong line-drive rate and high-end speed—both of which should help him sustain a high BABIP. Owners shouldn’t bet on Edman for too much power or a full season of playing time. For those seeking steals and batting average later in a draft, he represents an attractive option. His versatility doesn’t hurt, either.

We’ve certainly seen these Cardinals surprises disappear almost as quickly as they appeared, and Edman’s prospect pedigree and the team’s situation is such that it wouldn’t be a huge shock if he ends up in a part-time role that makes him more frustrating than fruitful for fantasy. At just 24, there’s plenty of career ahead of Edman, if he can stick. Owners can’t really afford to overlook stolen-base options like this in the current game. Unlike many of them, Edman has the potential to actually be a plus at the plate, as well as on the basepaths.