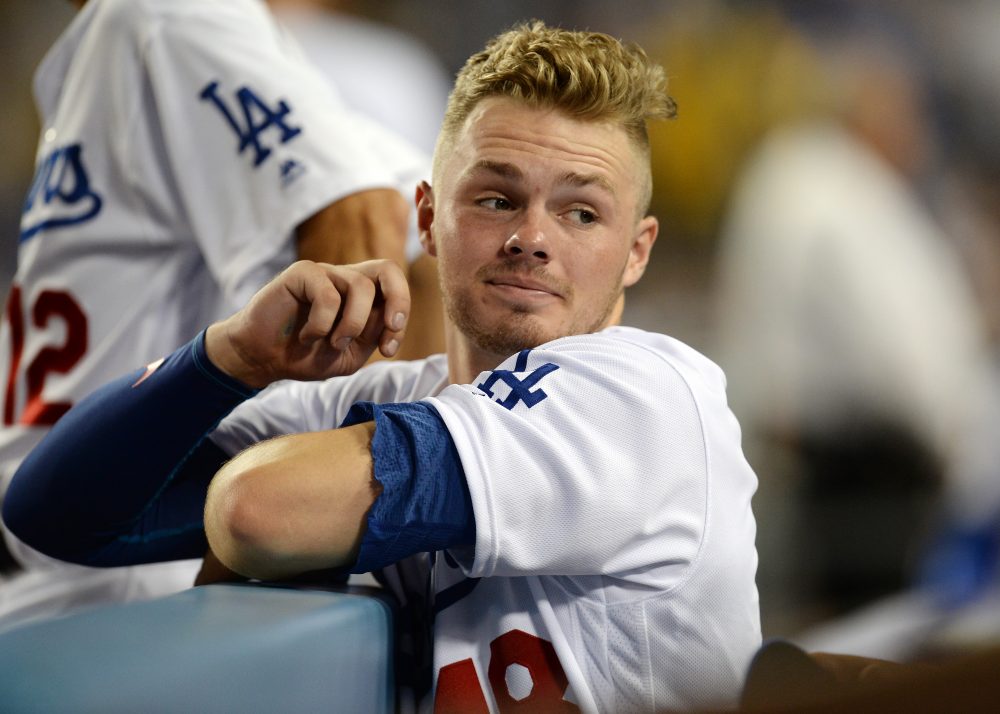 Gavin Lux $3 (Other Bids: $2, $1)
LABR doesn’t permit bids on minor leaguers, and Lux wasn’t officially called up until last Monday, which explains his availability. The low bids are explained by the fact that the LABR NL experts are running out of money. My $9 budget was the highest of all the teams in the league, so I went on a spending spree, blocking the two teams ahead of me in the standings from getting Lux and Mauricio Dubon (see below). Lux’s prospect pedigree is beyond question, but he has scuffled thus far in the majors. While he did start every game last week, he could lose playing time down the stretch on a talented Dodgers team. In leagues like NFBC with 2x/week lineup changes, you might want to sit Lux for the first half of the week when the Dodgers travel to Baltimore to face two lefties.

Mauricio Dubon $3 (Other Bids: $1)
No one would quarrel with the idea Lux is the superior prospect to Dubon but Dubon could very well be the player you want down the stretch. The Giants have indicated the former Brewers prospect will start against lefties and righties at both second base and short down the stretch. There are few opportunities like this in mono leagues to get an everyday player with both power and speed, although Dubon is more of a deep league add than an across-the-board necessity.

Jordan Lyles $70 (Other Bids: $38, $3, $0) (@MIA, @STL)
The Touts ignored Lyles all season, leaving him to languish on the waiver wire. However, since the mid-summer deadline deal that sent Lyles to the Brewers, he has quietly put together a string of starts in which he has compiled a record of 5-1 with a 2.56 ERA, a 1.06 WHIP, and a 34-to-14 strikeout-to-walk ratio over 38 2/3 innings. Opposing batters have hit just .198 off Lyles in a Brewers uniform. In the seven starts that he’s made since joining the Brew Crew, he has allowed seven home runs among the 27 total hits he’s given up. Besides the two starts listed above, Lyles will likely face the Padres in Milwaukee and Reds in Cincinnati before the season ends. If you need the strikeouts, Lyles can be streamed against all four teams.

Patrick Sandoval $38 (CLE, TB)
Sandoval struggled at both Double-A and Triple-A this season, putting together a combined ERA of 5.71 and a 1.74 WHIP over 80 1/3 innings with eight home-runs allowed. He didn’t do much better in five major-league starts with the Angels, compiling a 4.91 ERA with 30 strikeouts in 25 2/3 innings. Unfortunately, he didn’t get beyond the fifth inning in any of his five starts, mainly because he struggled with his command, giving up 11 walks and three homers. Sandoval is best left on the waiver wire unless you play in a very deep AL-only league.

Adalberto Mondesí $34 (Other Bids: $24, $12)
Mondesí has stolen six bases in seven attempts during the seven games he’s played since returning to the Royals from injury, giving him 37 steals in 42 attempts for the season. You’ll have to empty the FAAB war chest to get him, but he’s worth every penny if you need stolen bases.

Garrett Cooper $27
Cooper does a lot of things well but nothing spectacular, and injuries have hampered his progress throughout his minor-league career. He can hit for average but doesn’t hit for a ton of power, and there isn’t much in terms of speed. Still, Cooper might give you a bit of a boost over the final three weeks.

Ben Zobrist $10
Zobrist is back after a long layoff, but you’d never know he’s missed three months based on recent performance. He has put together a .375/.474/.438 line over his first five games since his return. Zobrist is going to play on a regular basis to get him tuned up for the postseason, so he’s worth adding in all leagues.sa

Asher Wojciechowski $3
Wojciechowski’s picture can be found right next to the definition of Quad-A pitcher. Over the course of 10 minor-league seasons (another big clue), he has a 4.03 ERA and a 1.32 WHIP over 951 innings. Wojciechowski has decent control, but his strikeout rate is a below average 7.6 per nine innings. Still, you can stream him against weaker teams like the Tigers and Mariners, but I wouldn’t risk using him against the Red Sox. Wojciechowski was slated to get a tasty matchup this week at Detroit, but Orioles manager Brandon Hyde announced that Wojciechowski would be skipped in the rotation. It’s possible the Orioles hurler doesn’t pitch at all this week.

Ross Stripling $51 (Other bids: $6) (@BAL)
Some fantasy analysts were high on Stripling coming into 2019; I saw him ranked as high as 40th among starting pitchers. I’ve never had any questions about Stripling’s ability and the stuff but questioned whether he’d have the durability to get the 160-170 innings he’d need to be worthy of such a ranking. Sure enough, Stripling has tossed a mere 81 2/3 frames in the majors this season, with only 13 starts out of 28 appearances. He’s a good/talented pitcher, but for fantasy he’d be better off on a team that would give him 30-32 starts and let the chips fall where they may. It isn’t merely the Dodgers conservative usage that has limited Stripling’s value; there have been injuries along the way that have knocked him out of commission. He’s slated to start at Baltimore this week. It’s a good matchup on paper that is a tough sell because Stripling could be on a limited pitch count in a game that matters little for Los Angeles outside of home field advantage in the playoffs.

Ronald Bolaños $30 (Other Bids: $3) (CHC)
Signed out of Cuba in 2016 for just over $2 million, Bolaños has consistently been pegged as a future fifth starter if things work out, and a future middle reliever if they don’t. The fastball is a mid-90s pitch with good movement, but everything else in Bolaños’ repertoire is inconsistent in terms of both command and quality. He acquitted himself well in his big-league debut against the Diamondbacks and lines up for a start against the Cubs this week, as the Padres shift to a six-person rotation. I’m OK rolling with Bolaños in 15-team mixed and NL-only.

Julio Urías $30 (Other Bids: $17, $11, $1, $1)
Urias was slated to face the Mets in New York this coming weekend, but it was reported a couple of hours before Tout Wars’ FAAB deadline that he is headed to the bullpen for the Dodgers upcoming Baltimore series. This could be a blessing in disguise. Urias served more as an opener than a true starter in his last start and could have a better shot at wins given the way manager Dave Roberts is using most of his rotation right now. Los Angeles’ large divisional lead and multiple pitchers make this a terrible staff to speculate on if you need wins, strikeouts and innings down the stretch.

Cory Spangenberg $25 (Other Bids: $0)
Last week in this space, I speculated that Travis Shaw could get some reps at second base and cut into Spangenberg’s playing time. It hasn’t worked out that way, in part because Mike Moustakas is banged up and keeps missing time, and in part because defense seems to matter more to the Brewers now than it did in April as they try to survive in the NL Wild Card race. Spangenberg is playing every day, even against lefties, and is likely to keep seeing most of the starts at second down the stretch. It’s still an NL-only profile all the way, and Spangenberg’s position at or near the bottom of Milwaukee’s lineup robs him of most of his stolen-base potential and, by extension, his fantasy value.