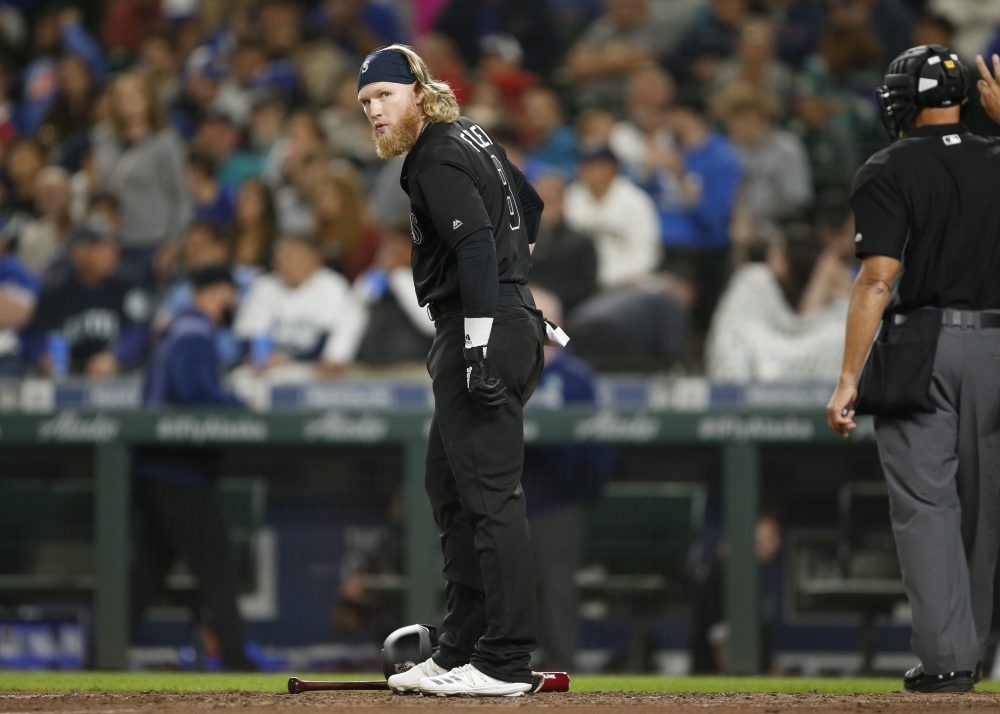 Mark Melancon $5 (Other bids: $3, $1)
Any doubt Melancon is Atlanta’s closer has been erased by his usage and performance the last two weeks. Ignore the 6.10 ERA since the trade; most of that damage came in an awful outing against the Marlins. The numbers that matter are the zero home runs and one walk he has allowed since the swap with San Francisco. Melancon has a 4.0 G/F ratio this season. You can’t hit a rabbit ball out of the park if you can’t lift it into the air, and Melancon’s cutter is a wipeout pitch when it’s moving like it was this weekend against the Mets. Melancon could be one of the biggest FAAB bargains down the stretch, and is a must add if you need saves.

Billy Hamilton $11 (Other bids: $5, $2, $2, $2)
Hamilton hasn’t started once since Atlanta claimed him off waivers from the Royals, but he already has two steals in the four games he’s played. If all you need are steals and can afford the lack of anything else from your final roster spot, then B-Ham is your guy. If not, don’t bid. The usual fantasy caveat that applies to Hamilton (don’t add him unless you’re sure you have enough HR/RBI/R elsewhere) is particularly true now that he’s a bench player and not a starter.

Willi Castro $3 (Other bid: $1)
Castro rebounded after a lost year in 2018 that saw Cleveland flip him to the Tigers for Leonys Martin. Castro was buried behind Francisco Lindor with his former team but now has a clean opportunity to become Detroit’s starting shortstop for years to come. The raw speed is the thing that most enticing in fantasy, although 17 steals in 525 Triple-A plate appearances doesn’t exactly whet the appetite. Castro is a useful spec play down the stretch, but if you’re looking primarily for speed, there are higher upside options elsewhere.

Brock Burke $2 (Other bids: $1, $1, $1) (SEA)
I’d be remiss if I didn’t point you to Samuel Hale’s insightful comments about Burke on our most recent podcast, as well as his analysis of Burke in The Call Up. Burke is an excellent example of why you must be careful about overusing stale scouting reports, particularly where young arms are concerned. The fastball already had some life on it, but it is Burke’s refined offspeed offerings that has vaulted him to major-league viability and has made him a useful fantasy component. I like him in deep mixed and AL-only this week against the Mariners, and while Burke’s probably a future No. 4 or 5 starter, I agree with Samuel’s assessment that Burke could play up to a mid-tier arm somewhere down the road.

Maikel Franco $23
Franco was called up to replace Bryce Harper on the roster after he was placed on the paternity list Saturday. Franco will play third base with Scott Kingery moving to the outfield, but this arrangement is only likely to last until Harper returns. At that point, Franco is likely headed back to Triple-A where he was assigned on August 4. After a stint on the injury list, Franco batted .211 over five games for Lehigh Valley.

Nick Solak $16 (Other Bids: $10, $2, $0)
Solak was called up last Tuesday to replace injured outfielder Nomar Mazara on the Rangers’ roster. He’s been playing daily and has put together a .318/.444/.545 line over his first seven games with a home run, two RBI, and four runs scored. Solak will likely stick around until the end of the season, and he could easily hit his way into replacing Mazara. Mazara was expected to anchor the Rangers’ lineup, but he has produced just 17 homers and 62 RBI over 443 PA, primarily out of the cleanup spot in the lineup. Solak’s had a solid season in Triple-A, batting .289/.362/.532 with 27 home runs and 74 RBI over 477 PA, and he plays both second base and outfield.

Aledmys Díaz $14
Assuming there were no setbacks over the weekend during Díaz’s rehab assignment, he is expected to rejoin the Astros after 10 days on the injury following a dizzy spell on the team bus. Díaz is batting .267/.320/.474 with seven homers and 28 RBI over 153 PA in a utility role for Houston. Carlos Correa is poised to return this week as well, but Díaz will start in his place until he’s back, then shift back to his utility role.

Willi Castro $9
Castro brings speed and developing power to the shortstop position for Detroit, who acquired him as part of the trade that sent Leonys Martin to Cleveland. At Triple-A Toledo, Castro has produced a solid .301/.366/.467 slash line with 11 home runs and 17 stolen bases. Castro replaced Niko Goodrum, who was placed on the injury list with a groin strain. Castro will likely start for the balance of the season, since he’s projected to be the Tigers’ starting shortstop in 2020. His power/speed combination should provide decent fantasy value, especially in deeper mixed leagues.

Brock Burke $9 (SEA)
Burke has been solid through two starts thus far with a 0.75 ERA, 0.92 WHIP, and nine strikeouts over 12 innings pitched. He struggled in the upper minors but was fast-tracked through four minor-league levels this year, so the Rangers clearly see some talent. Either that, or they see their utter desperation for starting pitching. Burke is a worthy streamer in AL-only and deeper mixed leagues.

Mitch Moreland $5
Moreland swatted 15 home runs through June 7, but the oft-injured first baseman has just one dinger since then. He’s traded contact for power over his 68 PA since returning from an injury with a .297/.338/.406 mark. Moreland has streaky power and could heat up at any time when healthy, so he’s worth a roster spot if you’re desperate for home runs.

Billy Hamilton $1
The Braves added Hamilton after he was designated for assignment by Kansas City, and they intend to use him as a pinch runner and defensive replacement. The lack of at-bats puts a sizable dent in Hamilton’s fantasy value, but he did notch 18 stolen bases in 23 attempts for the Royals in 305 PA. Still, he isn’t going to get enough playing time to make him worth a roster spot outside of the deepest NL-only leagues.

Avisaíl García $0
García has produced nice fantasy value, even though he’s played just 103 games, with a .275/.331/.452 line with 17 home runs and nine stolen bases. I needed someone to replace Nomar Mazara and figured I might be able to snag García with a zero bid—not that I have much choice with zero FAAB on hand. I’ll take whatever power/speed I can get from him. If I get lucky, he’ll get hot over the last month as he helps the Rays get into the postseason.

Trevor Richards $0
Richards has looked sharp since he was traded to the Rays from the Marlins with a 1.93 ERA and 11 strikeouts over nine innings in two starts. The Rays have a way of getting value from young pitchers, so I’m hoping that Richards can give me five or six strong starts over the final month. I doubt I can do any worse for a zero bid.

Jake Fraley $75 (Other bids: $44, $23, $0)
The one-sentence scouting summary for Fraley is as follows: he hits when he’s healthy but has trouble staying healthy. Acquired from the Rays as part of the Mike Zunino deal this past offseason, Fraley managed to stay on the field in the minors and put up a strong line that included 19 home runs and 22 steals. He is one of those odd players with both a moderate ceiling and floor, which means he should be a solid contributor (again, assuming health), but it’s unlikely he’s going to break out and be a superstar. The steals are the big deal in fantasy if Fraley keeps running in the majors. The Mariners weakened lineup doesn’t do his buyers any favors in runs and RBI, but Fraley is a worthy AL-only add and worth considering in deep mixed, especially if you need to gamble on the steals down the stretch.

Framber Valdez $47 (Other bids: $41, $11, $10, $5) (@TOR)
On ability alone, Valdez is a steal at this price, but will the results finally sync up with the talent? Aaron Sanchez is on the IL with a pectoral injury and likely out for the season, so the slot belongs to Valdez if he performs. However, with a 8.2 K/9 and 5.2 BB/9 in his short major-league career, it’s fair to wonder if there is more risk than reward. He gets the Blue Jays in Toronto this week and is fine in AL-only, but I’d be wary of slotting Valdez into my rotation anywhere else.

Matt Magill $38 (Other bids: $23, $0)
A minor-league journeyman most of his professional career, Magill gave himself some long-term viability in 2018 by adding two miles per hour to his fastball while he was with Minnesota. The Twins didn’t have room at the inn for the 29-year-old righty and sold him to the Mariners last month. It took a little while, but Magill filled the vacuum in the ninth for Seattle after they cleaned house at the deadline. Magill is now averaging 95 MPH on the gun with his heater and is mixing in an effective curve more frequently. I don’t want to oversell his transformation (Magill has a 4.89 DRA), but in a thin bullpen with limited options, Magill is going to get the few save chances Seattle does get.

Brandon Dixon $36 (Other bids: $0)
The Tigers are awful, and I’ve spent a good portion of the season writing about position-player starters on awful teams because this is a deep league FAAB column. Dixon fits this mold, and I’m sure I’ve written about him already in this space (although I can’t say I remember for sure). He’s got some over-the-fence power, but it comes with an awful OBP and he’s on a terrible Detroit team where runs and RBI are hard to find. Dixon is losing a little playing time down the stretch, as the Tigers try to cycle in as many young players as possible. Dixon is OK if you really need the power in AL-only.

Ronny Rodríguez $22 (Other bids: $0, $0)
On May 14, Rodríguez had six home runs in 84 plate appearances with a 1.058 OPS, and AL-only fantasy managers were congratulating themselves about their relative brilliance. Then the bottom fell out, and Rodríguez dropped all the way down to a .690 OPS before he was optioned to Triple-A on June 30. He returned earlier this month and quietly has been hitting home runs again and getting regular reps at second base in Detroit. Rodríguez is a worthy power gamble in very deep leagues, as long as you’re aware the bottom could once again fall out in short order.