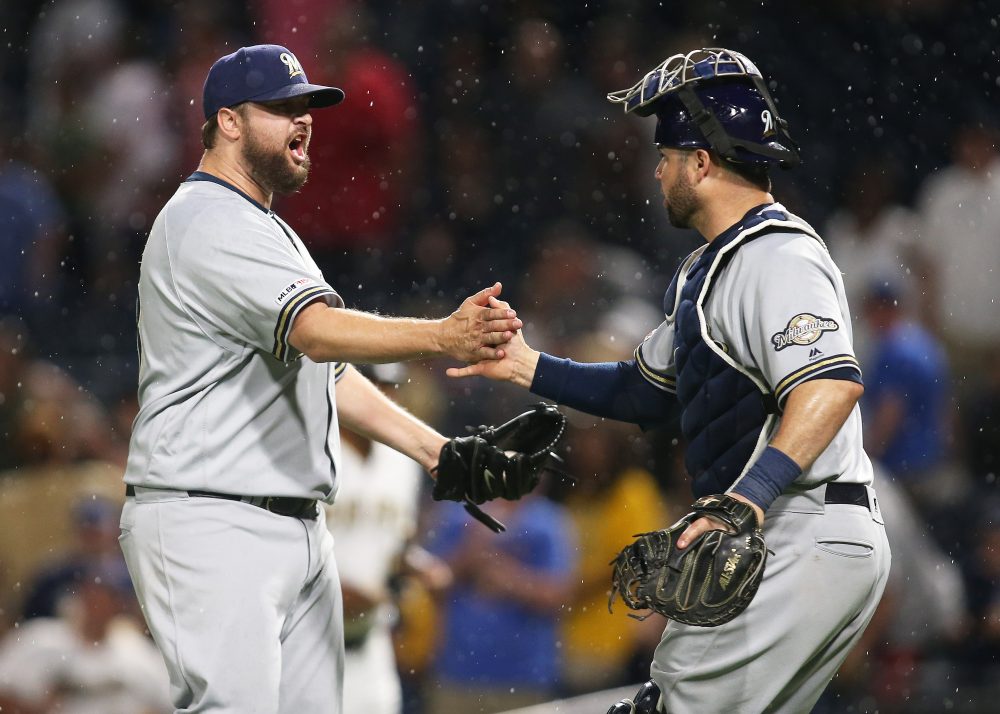 Matt Albers $51 (Other Bids: $0)
I emptied the FAAB war chest on Albers, who has a 0.68 ERA over his last 13 1/3 innings with three holds and three saves during that span. For more on Albers and some disturbing Josh Hader news, be sure to check out tomorrow’s Closer Report.

Zach Eflin $23 (@MIA)
Eflin has been very inconsistent all season long, but the Phillies need someone to take Jake Arrieta’s spot in the rotation. Before you bid on him, you should be aware that he hasn’t been on the winning side of any game since June 24 over 10 appearances—six as a starter, four in relief.

Logan Webb $13 (Other Bids: $9) (@OAK)
Webb was fast-tracked to the majors after pitching at four minor-league levels this season. So far, he has racked up 63 1/3 innings with a 3.41 ERA in the minors and was sharp in his major-league debut against Arizona, with just one earned run allowed over five innings with seven strikeouts. Webb looks like an effective streaming option in all fantasy leagues.

Matt Magill $5
Seattle’s bullpen is a nightmare for those speculating for saves, but Magill appears to be the latest favorite for the ninth inning. He has a five-inning scoreless streak with eight strikeouts, zero walks, and just two hits allowed. He has picked up a win, a hold, and a save during the streak.

Daniel Hudson $4
The Nationals lost Sean Doolittle to the injury list, so they’re looking for someone to handle the ninth. Hudson has been their most-effective reliever of late. Since coming to the Nationals from Toronto, Hudson has a 1.08 ERA over 8 1/3 innings.

Brett Phillips $128 (Other bids: $30, $27, $0)
In the pre-juiced ball era, I would have glanced at Phillips’ 18 home runs and 22 stolen bases at Triple-A and been extremely excited about his major-league potential. I would have written a 500-word post on my blog with purple prose to spare. In 2019, I look at that line and wonder if he’ll make much of a dent in the majors. Phillips is relatively young at 25, and the Royals certainly have nothing to lose by starting him in their outfield for the next six weeks and seeing if he can perform in the majors. The speed could play up on a Royals team that is more inclined to run than most major-league teams. Phillips is also a better play in an OBP league like Tout than in an AVG league like LABR.

Rick Porcello $33 (Other bids: $31, $10, $2) (PHI)
I dropped Porcello during the previous transaction period, so I’m the wrong person to ask about whether he’s going to bounce back or if he has any life left in him. He had a solid outing against the Orioles last week, but I can’t recommend him in good conscience in any format at home against the Phillies, not even in AL-only. Porcello has a 6.28 DRA and his ground-ball rate has dipped to 39 percent this season. He’s not the ground-ball machine that he was in Detroit, but the combination of the rabbit ball, Fenway, and the lack of a punch-out pitch has completely sunk Porcello. A convincing case could be made that no one has been hurt more by the juiced ball than the 2016 AL Cy Young Award winner.

Billy McKinney $30 (Other bids: $16)
McKinney is another player who I’ve been sucked into this year, albeit not in AL Tout, thankfully. The power has been there for McKinney since his 2018 debut, but there is so much swing-and-miss that he tends to get exposed with regular playing time and winds up on the bench or back in the minors. It is easy to envision 25-30 home runs in a full season, if McKinney gets the opportunity. It is difficult envisioning him getting that opportunity, even with the rebuilding Blue Jays.

Rio Ruiz $26. (Other bids: $15, $0)
In the preseason, we fantasy analysts tend to overstate trends and apply far too many broad strokes. The season is unpredictable, and players are going to emerge who we can’t see coming on May 15, let alone on March 1. However, there are some things we get right. As a community, we were dead on when we wailed and gnashed our teeth about how useless the Orioles’ offense was going to be in fantasy. Trey Mancini has been an asset in almost every format, while Jonathan Villar is useful in Roto because of those steals, but the rest of Baltimore’s offense has been a barren wasteland. Stare closely enough at Camden Yards, and you’ll see a tumbleweed blowing through centerfield on a sad Sunday afternoon. With an 82 DRC+ and seven home runs in 306 plate appearances, Ruiz has been a placeholder for the Orioles and an AL-only compiler in fantasy. He’s acceptable, if you have a dead spot on your roster in mono formats, and that’s the extent of his value.

Joshua Rojas $113 (Other bids: $85, $23, $12, $5, $0)
Rojas was acquired from the Astros at the trade deadline last month as part of the Zack Greinke deal. J.P. Breen described Rojas perfectly in his fantasy take on the swap, calling Rojas a “statistical darling without the scouting profile to back it up.” We don’t know if Rojas will keep producing the way he did in the minors (to the sweet tune of 23 home runs and 33 steals), but the Diamondbacks are granting him the opportunity. Plus, the calendar tells us we’re heading into the second half of August, and it is getting late in your fantasy leagues. Rojas is intriguing in deeper mixed. In NL-only, he’s a top-of-the-pops addition, and the kind of player who could push your team to a championship. Go get him.

Neil Walker $55 (Other bids: $20, $0)
Walker has been a serviceable, slightly below-average (96 DRC+) hitter for the Marlins and quite the bargain at one-year, $2 million for Miami (and this is before you take his veteran presence and intangibles into account). Unfortunately, that slightly below-average production hasn’t come with the power that is seemingly attached to nearly every major-league hitter with a pulse these days. Walker gets enough playing time to justify using a fantasy roster slot, but in an era where three home runs flew out of the ballpark while you were reading this sentence, your fantasy team is going to need much more than a 10-home-run seasonal pace without any speed attached.

Freddy Galvis $31 (Other bids: $23, $2)
Galvis has been a well-below-average player throughout his career (he has an 83 DRC+ in 3,587 plate appearances), but he has managed to cobble together quite the fantasy resume thanks to his over-the-fence power, decent baserunning speed, and a defensive reputation that has kept him in the lineup even though it isn’t supported by the metrics. Galvis is a poster child for the modern game: a serviceable second-division starter who manages to hang onto a job well past his expiration date so a younger player with a higher ceiling can spend an extra half-season in the minors to game that youngster’s service time. This has benefitted bargain shoppers in deep fantasy leagues, who have been all too happy to scoop up Galvis at a single-digit price and ride those cheap dingers and steals to the winner’s circle. The steals haven’t been there this year, but Galvis’ home runs have spiked. He is a nice consolation prize in NL-only if you missed out on the higher-profile players who came over from the AL in July.

Jon Berti $2 (Other bids: $1)
Berti was a 29-year-old minor-league lifer before cracking the Marlins lineup in late April. He landed on the IL with an oblique injury in mid-May and wasn’t activated until July 31. Since his return, Berti has quietly been a productive regular, with a .311/.391/.492 line in 69 plate appearances. Berti’s four steals in that time frame are what jumps out, although two of those steals came in one game on August 3. Berti is the sort of player WHO you should be looking to add at this late juncture, especially if you need steals and can afford to take a slight hit in home runs and RBI.

Logan Webb $6 (Other bids: $1) (@OAK)
Webb has missed big chunks of time developmentally because of both Tommy John surgery earlier in his career and an 80-game PED suspension after testing positive for Dehydrochlormethyltestosterone in May. Webb showed off all the positives in his scouting profile in his major-league debut, with a solid fastball and plenty of ground-ball outs. The warning label on Webb is that he has been mechanically erratic, and in a perfect world he would get a full season to polish his craft in the minors. Webb’s long-term future might be in the bullpen, but his stuff could play up enough the rest of the way to make Webb a solid albeit unpredictable option.

Mark Melancon $3 (Other bids: $3, $2)
The expectation when Atlanta bolstered their bullpen at the deadline was that Shane Greene would close and Melancon and Chris Martin would set Greene up, but Greene pitched poorly out of the gate and Melancon has settled in as Atlanta’s closer. Melancon is the same pitcher he has been for years. He does have some punch-out ability, but he primarily relies on ground-ball outs. When his stuff isn’t sharp, he can be hittable. Saves are saves, but in a bullpen with so many options, be aware that you could be buying the Atlanta closer the rest of the way or you could be buying a save or two before Brian Snitker shuffles the deck chairs once again.

Corban Joseph $8 (Other bids: $2, $1)
Batting average isn’t the greatest stat and Triple-A PCL numbers come with more caveats than a bottle of nineteenth-century nerve tonic, but Corban Joseph hit .371 at Triple-A this year. .371! Ty France (.399) and David Freitas (.387) posted even better batting averages, so Joseph’s proficiency at the plate isn’t as novel as it might have been a few years ago, but Joseph still deserves credit where credit is due. The Athletics agreed, promoting Joseph to the majors and sticking him on the good side of a second-base platoon with Jurickson Profar. Joseph won’t provide enough power to matter outside of AL-only, but the playing time should be there the rest of the way if all you need are runs and RBI down the stretch.

Trevor Richards $2 (Other bids: $1) (@BAL)
If you grabbed Richards immediately after the trade deadline and were disappointed that the Rays didn’t immediately insert him into their rotation, your dejection didn’t last long, as Richards made his AL debut yesterday against Detroit. Richards had the rust you’d expect for a hurler who hadn’t started a game in the majors in nearly a month, lasting only 3 1/3 innings before getting yanked. Richards has an amazing circle change that excites the pitch nerds, but he compliments that with a flat, low-90s fastball that is below average, which is putting it kindly. Richards was somewhat successful in 2018 but crashed and burned in Miami this year, with a 5.69 DRA to show for his subpar efforts. The Rays have a good track record into turning other team’s trash into their treasure, but even if they do maximize Richards’ potential, he still could be nothing more than a 4-5 inning starter who doesn’t offer much for fantasy purposes. Grab him only if you really need to roll the dice on strikeouts.