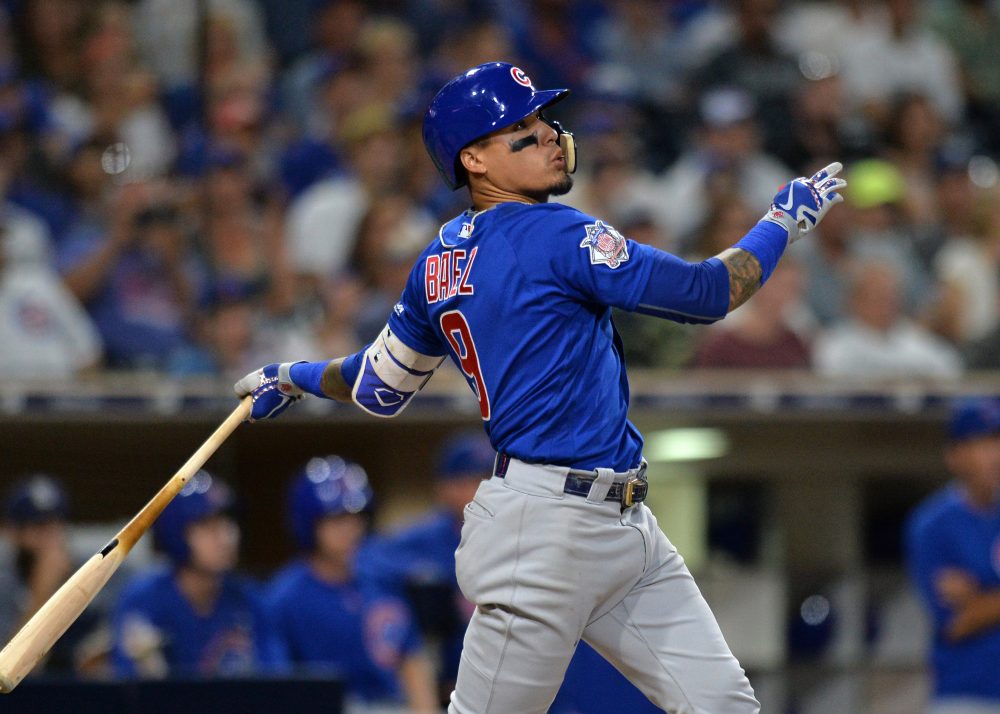 Cue the music. *It’s the most…wonderful time…of the year.** With the holiday season upon us, that of course means that all of the “Too Early Mock Drafts” should be wrapping up in favor of just the plain old, regular mocks we get to look forward to as the new year approaches. To celebrate the season, here are 12 interesting stats to keep in mind while sipping eggnog, devouring gingerbread men and of course discussing 2019 draft strategies. Let’s call them the 12 Stats of Christmas.

On the first stat of Christmas, (Wait, or is this the 12th? Wow, this concept sure falls apart in a hurry.)—

With the unveiling of DRC+, we now have more ways than ever before to project future performance. Let’s single out a few performers that, while they didn’t produce eye-popping numbers, did perform 12 percentage points better than league-average at the dish in 2018. On Monday, our pal Kevin Jebens wrote a nice piece on Jurickson Profar, detailing why this might finally be the season in which the former top prospect fully arrives on the scene.

In addition, another former top prospect, Michael Conforto, put together a sneaky good season, producing a 112 DRC+. A couple notable things about Conforto’s 2018—he notched nearly 200 more plate appearances than his previous career-best, and he hit lefties considerably better than his career average. While a line of .249/.330/.473 against southpaws isn’t really anything to shout from the mountain tops, it’s a marked improvement from his career line of .215/.291/.403. Now a full season removed from shoulder surgery, if Conforto can fold in a little of his power from the 2017 season to his newfound approach, all while hitting in the middle of a deeper Mets lineup, he has an outside chance of reaching OF2 status in fantasy circles.

You may have heard something about the workload of starting pitchers taking a bit of a dip in the last handful of seasons. It’s a thing. Since 2016, only 11 starting pitchers have logged at least 172 innings in three consecutive years. The list is littered with Verbal Kints (you know, the Usual Suspects) like Justin Verlander, Max Scherzer, Corey Kluber and Jon Lester. Also making appearances are workhorse, innings-eaters like Tanner Roark, Julio Teheran and Mike Leake. At this point, you pretty much know who they are. However, despite early concerns and bullpen flirtations, Kevin Gausman has also been exceptionally durable over the last three years. In addition, and you’re not going to believe this, but he was significantly better after leaving the Orioles organization after the July deadline. In 10 starts for the Braves, Gausman tossed 59 2/3 innings with a 2.87 ERA (3.13 DRA). His strikeouts took a dip, but his swinging strike rate remained fairly constant, an indicator that the righty could unearth some of the lost whiffs in 2019. We’ve all gone into a season targeting the elusive “Gausman Breakout”, and perhaps against my better judgment, I’ll do it again this year.

The stolen base landscape. Finding steals in today’s iteration of fantasy is like counting on network television to provide multiple seasons of a good show. Sure you might find The Good Place like Trea Turner or Starling Marte, but more often than not, you’re going to have to supplement your entertainment with one season outliers. Case in point, in the last three seasons, only 10 guys have tallied 20 or more steals every year (Turner, Mike Trout, Jean Segura, Mookie Betts, Billy Hamilton, Dee Gordon, Marte, Jose Peraza), including two who seem to be flying under the radar this offseason: Jonathan Villar and Rajai Davis. After receiving fantasy MVP votes in 2016, Villar has followed up with two below-average offensive seasons, according to DRC+. Even so, he’ll be playing shortstop everyday in Baltimore, and he’s probably a lock for 35 steals and a decent batting average. Davis just signed a minor league deal with the Mets, a team that isn’t overflowing with speedy outfield options. Despite not getting daily reps, Davis has failed to eclipse 25 steals only twice in his last 11 seasons.

Like Conor McGregor, or the eponymous B.I.G., saves are notoriously difficult to accurately project, and the role is definitely not one that typically receives tenure. Only nine hurlers have converted at least 23 saves in both 2017 and 2018—Craig Kimbrel, Kenley Jansen, Fernando Rodney, Raisel Iglesias, Sean Doolittle, Cody Allen, Ken Giles, Edwin Diaz and Wade Davis. Kimbrel doesn’t have a team, but he’ll presumably close for whomever he signs. The Nats keep signing closers and former closers, so while Doolittle might be the best option there, it’s hardly a lock. Allen might not close in 2019, and Rodney almost certainly won’t, behind Blake Treinen. While I don’t advocate punting an entire category (they all theoretically count the same), if you miss out on someone reliable, and reliable is such a subjective idea lately, it might be better to invest much later in drafts and scour the waiver wire for early-season save trends.

In each of the last eight seasons, contact rates have dropped. Last season, the league as a whole hit .248, which was the lowest since 1972. The average swinging strike rate has alternatively been on the rise in every season since 2010, culminating with a league average just under 11 percent. High contact guys are more important than ever, and eight hitters posted a number at five percent or lower last season. One of these players is Joe Mauer, who retired. Another to keep an eye on (but didn’t reach the plate appearance threshold) is our favorite rotund rookie, Willians Astudillo, who went down to strikes in a hilariously low 3.1 percent of trips to the plate. He should get a decent amount of playing time for the Twins and he’s catcher-eligible, which is nice.

According to our colleague Mike Gianella’s valuations, only seven pitchers were worth $25 or more in the NL (compared to 10 in the AL). Max Scherzer and Jacob deGrom are obvious names, and perhaps Aaron Nola and Patrick Corbin are as well, but rounding out the magnificent seven are Zack Greinke (who is perpetually “washed up” every spring), Miles Mikolas (who paired a hot start with a similarly strong second half, albeit with more strikeouts) and Mike Foltynewicz (who slowed his torrid pace in the second half). All three of these guys will go high in drafts, although probably not as high as they should.

Despite the home run bonanza in the league, only 27 hitters smacked at least 30 homers in 2018, as opposed to the 41 and 38 hitters in 2017 and 2016, respectively. Only six dudes eclipsed that mark three times: Nolan Arenado, Manny Machado, Khris Davis, Nelson Cruz and Edwin Encarnacion. Also to do it—Justin Upton, who has somehow become one of the least sexy options (not, like, physically, because he’s a very handsome person) at draft time. Upton has posted an above-average DRC+ in every season since his age-19 rookie campaign, and has homered at least 25 times every year since 2012. He’ll post strong run production totals, won’t be a zero in steals and will do it at a much more palatable draft day price.

Only five hurlers have punched out at least 175 batters in each of the last three seasons. Scherzer, Chris Sale, Kluber and Verlander you know, but would it surprise you to learn that the fifth was Rick Porcello? DRA has never really been a believer in the 29-year-old (seriously how is Porcello only 29 years old?), but the righty has been as durable as they come. He threw more sliders last season than at any previous point in his career, resulting in a career-best strikeout rate and his best groundball rate since 2015. Porcello isn’t an ace, but he’s in the perfect situation to pile up an enviable wins total, and potentially flirt with a sub-4.00 ERA in the process.

The league-average WHIP has hovered around 1.30 for the last eight seasons. Only four starters have produced a WHIP of 1.10 or better in each of the last three seasons. Scherzer, Sale, Kluber and Clayton Kershaw. Ok, so maybe this one isn’t as helpful. You already know these guys are good. If you increase the arbitrary WHIP to 1.15, Rich Hill and Carlos Carrasco enter the mix (but you know, that wouldn’t mesh with the “four” theme).

As mentioned above, the league’s batting average is in a Tom Petty-esque free fall. This gives added value to guys who can consistently produce strong numbers in the batting average category, more specifically, hitting .300 (there’s a three, that’s what we’re going with). In the last three seasons, only six players have eclipsed the elusive .300 mark every year—Mike Trout, Jean Segura, J.D. Martinez, Jose Altuve, Freddie Freeman and…Jose Martinez. The 30-year-old has a career slash line of .309/.372/.478 in just over 900 plate appearances with the Cardinals, and certainly will have a lower draft day price than the other guys populating this list. The Paul Goldschmidt acquisition muddies his playing time, as he’s, let’s be charitable and call it poor on defense in the outfield. But if he can find a path to consistent offensive work, he’s going to continue to rake.

Only two players swung and missed at a clip over 18 percent last season—Joey Gallo and Javier Baez. It was the second consecutive season they finished first and second for the ignominious honor. Both of these guys are super fun, Baez specifically, as he has become a sort of cult hero in Wrigleyville and beyond. Having said that, so much has to go right for these huge strikeout guys to be successful and fantasy stars. If Baez runs a little less, doesn’t match his 30+ homer tally from a season ago or annoys the BABIP gods, he’s definitely not going to be in the MVP conversation, and more likely than not, he could be relegated to MI status for fantasy purposes. Don’t get me wrong, I love watching Baez (and Gallo), but with the risk involved, I’m almost never going to pony up the high cost to acquire him on draft day.

In the last three years, only one player has hit at least .270 with 20 homers and 20 steals in every season.

All I want for Christmas is Mike Trout, because like the Highlander, there can be only one.

If you’ve made it this far—Happy Holidays to everyone. May your days be merry and bright, and may all your fantasy drafts go right.