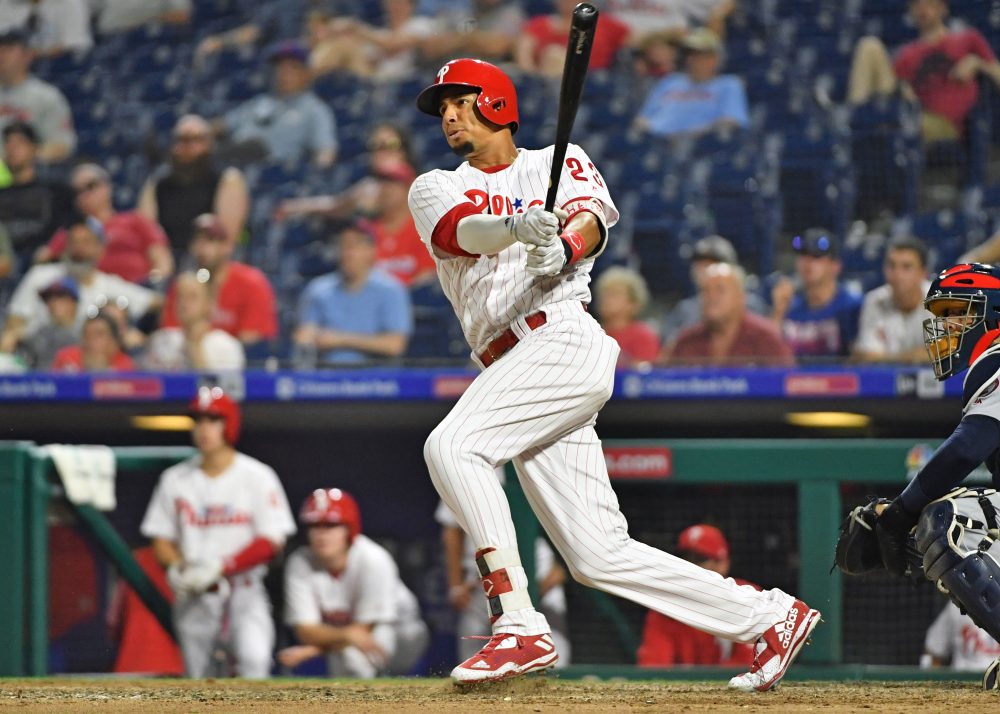 Shields has been far from consistent this season, but he’s in the midst of a decent stretch, having allowed three earned runs or fewer in seven of his last nine starts. Pitching Shields against a high-powered Indians lineup might seem like a risky move by Scott Pianowski of Yahoo, but Cleveland is locked into their playoff seeding and will likely rest many of their regulars throughout the week. And strangely enough, in three starts versus the Indians this season, Shields sports a 2.25 ERA and a 0.95 WHIP. Go figure.

There’s nothing too special about Difo but he’s playing every day and is eligible at second base, third base and shortstop. Oh, and he’s swiped three bases over his last seven games. Fred Zinkie has a few gainable points in steals, so he’s hoping to catch speed in a bottle with this acquisition.

Cahill returned to the mound on Sunday after missing two weeks due to a back injury, and the results were not good. The veteran righty lasted just 3 1/3 innings, allowing five runs (three earned) in a loss to the Twins. Health is always an issue with Cahill but on the whole, he’s pitched well for the A’s this year and draws a promising matchup to close out the season, as the Angels rank 13th in the AL in both runs scored and OPS in September. The biggest concern with Cahill for this week is his 7.02 road ERA compared to his 1.49 ERA at home.

While 2018 has been a lost season for Davies from both a health and performance standpoint, the Brewers righty has been solid since returning to action earlier this month, registering a 3.32 ERA and a 1.11 WHIP in four September starts. A favorable home matchup awaits this week against a Tigers team that ranks among the bottom five clubs in the majors in both runs scored and OPS.

Jeff Zimmerman is in a tight saves race, so it makes sense for him to take a flier on Buttrey, who has notched four saves this month for the Halos. But after stringing together eight consecutive scoreless appearances, he’s coming off a disastrous blown save outing on Saturday against the Astros in which he allowed five runs (four earned) while failing to record a single out. My guess is that he will still get the next save chance for an Angels squad that will be heading home for the winter next week, but Buttrey isn’t as safe of a fantasy option as he was a few days ago.

It’s only fitting that for my final Tout Wars FAAB move of the season, I added a player who has been one of “my guys” for quite some time thanks to his year-to-year consistency. Sure, Seager has been a fantasy disappointment in 2018, and the batting average is terrible. But I’m still surprised that he was dropped last week in this 15-team mixed league. The home run and RBI totals really aren’t that bad. Anyway, I figured that Seager would represent at least a slight upgrade over Adam Jones in my active lineup, as Jones’ playing time has been cut of late. But to be honest, one of the reasons why I made this move is that I had a dollar left in my FAAB budget and I really wanted to use it.

Nick Williams could be out for the season. This makes Altherr an attractive pick-up, although his numbers are down significantly across the board from 2017. Every move for the last week of the season is contingent on where your team is in the standings. Add small sample size variability to the mix, and who the heck knows? Altherr has been terrible in batting average all season, but maybe he goes 6-for-15 this week with two home runs. The mind’s eye cannot see such things.

(Editor’s note: At this point, Mike presented a 6,000-word rant in defense of Richard Bach’s 1977 novel: Illusions: The Adventures of a Reluctant Messiah. I read the entire screed to see if there was anything pertinent to fantasy baseball but, no, it was just a long missive discussing Bach’s book, mostly delving into a theory that the protagonist is loosely based on President Gerald Ford. I’m worried about Mike.)

The battle for Tout Wars NL comes down to Steve Gardner of USA Today and (grumbles) this guy. 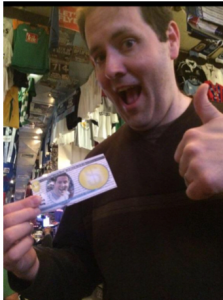 Tristan Cockcroft of ESPN pictured here trying to spend “Cockcroft dollars” at an Applebee’s in Parsippany, New Jersey in December 2017. It was kind of funny at first, but he’s been doing this for five years and now it’s just sad.

For most of the season, it looked like Grey Albright of Razzball would win his second consecutive NL Tout title going away; he had a 35-point lead as late as mid-July. But his team collapsed, and now Gardner and Cockcroft are fighting for the crown. For Gardner, it would be his second Tout win and his first since 2011. For Cockcroft, it would be his fourth. C’mon, Tristan. Enough is enough. We get it, you’re good at this. Stop making the rest of us feel inadequate.

Gardner and Cockcroft were in competition for two of the players above. Cockcroft wanted Koch, but missed out to Gardner, settling on Oswalt. Cockcroft got Diaz, his $0 bid beating Gardner’s. Cockcroft’s team has many more points to gain and a higher ceiling, but the Baseball HQ evaluator has Gardner winning by 3.5 points. Good luck to both of you, but mostly to Steve.

O’Brien was once a top prospect in the Yankees system. Let’s just say that things haven’t gone well since. At this point, he is best viewed as a one-dimensional player who might hit one or two more homers by season’s end. He’s launched three home runs in 16 games since the Marlins called him up to the big leagues earlier this month and has been getting steady playing time lately, so he certainly carries some NL-only appeal.

With one week to go, my NL LABR title hopes are slipping away thanks to some dreadful starting pitching. A deficit that was two or three points has ballooned to six points, and Derek Carty of Rotogrinders has now surpassed me for second place behind league-leader Howard Bender of Fantasy Alarm. I’ll need a dominant final week from my starters to have a chance, so dropping Joe Ross, who will be pitching at Coors Field, for Toussaint was a no-brainer. Although Toussaint is by no means an ultra-safe option, the matchup is enticing.

If you weren’t reading Eddy Almaguer’s Stash List this year, you missed out on more than a few key additions this season, including James. The 25-year-old righty talked to Max Scherzer this winter and the Nationals’ ace advised James to trust his stuff and be more aggressive with his approach. It worked, as James’ strikeout percentage spiked and he went from being a middle-of-the-road prospect to a very good one. For years, the assumption was that James would slot in as a middle reliever, but his amped up velocity and better location on the slider have given him a chance to start. He’s a decent play against Toronto tomorrow, but where I have my eye on James is in keeper leagues, regardless of role.

Meadows appears in this space for the first time because you cannot bid on minor leaguers in LABR. Meadows was kept in Triple-A for the Durham Bulls’ pennant race, and not because of service time concerns, no siree bob. Rays manager Kevin Cash said Meadows wouldn’t play much down the stretch, but the former Pirates outfielder has started twice and is likely to start the rest of the way. Use all your FAAB if he’s available and you need offense.

The battle in LABR AL is for second place. Glenn Colton and Rick Wolf have all but clinched another title. Congratulations in advance!

Thanks for spending another year reading the Baseball Prospectus FAAB Reviews. See you in 2019!