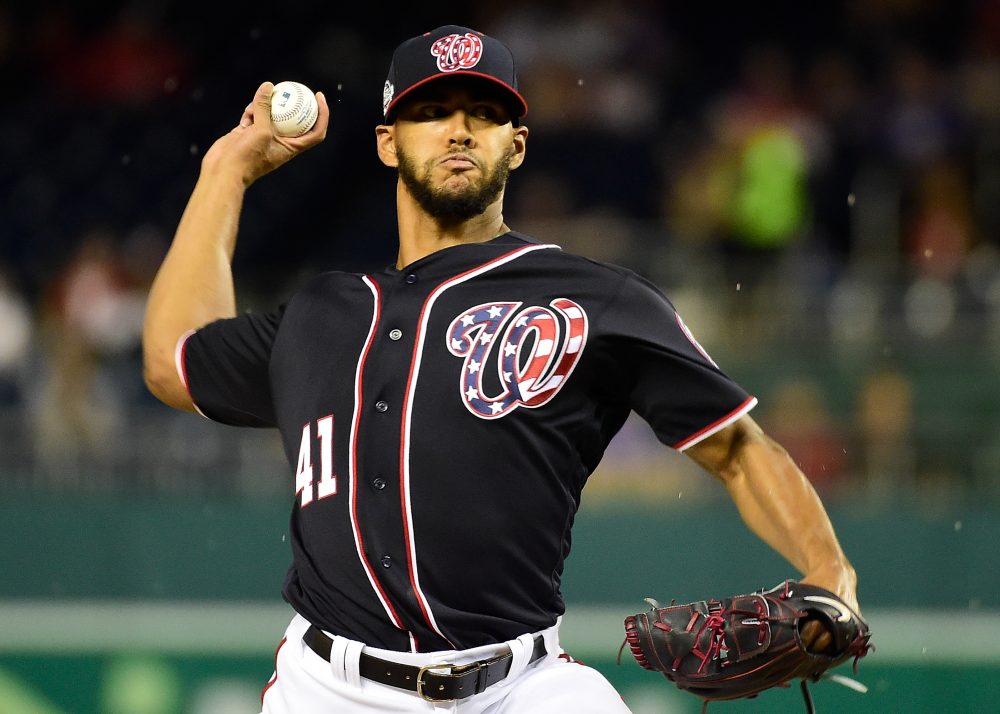 With two weeks remaining in the 2018 campaign, the Baseball Prospectus LABR NL squad (Mike drafted the team in Arizona back in March and I’ve managed it all season) has a chance to win the title. The chances are slimmer than they were a few days ago, but Howard Bender of Fantasy Alarm once enjoyed a commanding lead, so the fact that we took over first place a few days ago (it might have been only for an hour or two, but still) is sort of miraculous.

OK, enough of the hyperbole. We’re currently 5.5 points back, and finally fed up with the erratic Gio Gonzalez to the point where I was ready to drop him, I opted to make a play for Ross. Somewhat surprisingly, my $3 bid was uncontested. LABR rules prohibit players on the DL from being purchased in FAAB, so this was the first week Ross was available. Making his first big league start since last July after undergoing Tommy John surgery, Ross fared well against a high-powered Cubs lineup (5 IP, 4 H, 2 ER). Tyson’s younger brother has proven himself to be a quality major league pitcher when healthy, so I’m hoping that he can take advantage of two favorable home matchups, versus the Mets and Marlins, to close out the season on a high note. I also added Gore in a longshot attempt to gain a point in stolen bases, but being that we need to overcome a five-steal deficit, this feat will be tough to accomplish.

Elsewhere, Eric Karabell of ESPN grabbed Hirano, who I considered bidding on before ultimately deciding to instead use my remaining funds to address starting pitching and speed. I still have $1 available for the final FAAB run next week.

If you’ve ever watched a baseball game in real time on social media, you’re familiar with the phenomenon where it might seem like a team that is winning is losing by 3-4 runs based on fan reactions. Glasnow is the opposite of this phenomenon. I assumed he was having a great stretch for the Rays based on fan reactions, particularly Rays and Pirates fan reactions, so I was surprised to see him with a 4.70 ERA and a 4.30 FIP in his eight starts for the Rays. Much of this damage came in one start on September 5 against the Blue Jays, but this has always been the problem with Glasnow. The raw stuff is tremendous, but the blow-up potential has always been considerable, and there is additional risk when a pitcher is converted from a reliever to a starter mid-season. Glasnow has a solid two-start week on tap against two teams playing out the string. He’s an obvious strikeout and wins play, but I can’t guess what his ERA/WHIP will look like.

Bundy, on the other hand, is a pitcher I was aware had been struggling this season. The strikeouts are up but Bundy has moved away from his off-speed offerings, throwing more fastballs and sliders than he did in 2017, and he’s lost his command in the zone. Home runs, which were already an issue last year, have become a significant problem for the Orioles right-hander. Bundy is a wins/strikeouts play only; you cannot pick him up if your ERA and WHIP are in any sort of danger.

I had to drop Norris due to a roster crunch and Glenn Colton and Rick Wolf were happy to pick him up. Barring a catastrophe, the duo is on their way to their fourth AL LABR title.

LABR does not allow $0 bids and some teams are out of FAAB, which limits and influences the quantity of bids in the final two weeks of the season. However, as you will see below in the Tout Wars section, it has also been quiet in the NL, which has a close race and three teams that could feasibly win the title. The lack of activity could be due to expert disinterest, but it is far more likely that the lack of quality September call-ups is having an influence as well.

Unlike in his previous big league stints this season, Fernandez has been playing every day since his latest recall from Triple-A on September 1. And the Cuban import has been productive lately, with two homers and five RBIs over his last seven games. While his minor league numbers through two seasons are strong, the issue here is that Fernandez is already 30 years old, so his ceiling might be limited. That said, he’s displayed excellent plate discipline skills to go along with solid power, so it will be interesting to see if he can earn a spot on the Angels’ 25-man roster to open 2019. But for now, he’s getting regular at-bats and could prove to be a quality addition to Ron Shandler’s roster.

With only $10 left in my FAAB budget, I was skeptical that I’d be able to add Bruce, who has already racked up four homers and 12 RBIs since the calendar turned to September. There’s no denying that the veteran outfielder has been a huge disappointment this year, both on the performance and injury fronts, but he’s also a proven (albeit streaky) run producer who probably shouldn’t be on the waiver wire in a deep mixed league. Anyway, by a slim margin, my $9 offering ended up being enough, and I’m hoping that Bruce can finish out the season strong and help revive my offense, as my hitters have all of a sudden forgotten how to hit home runs.

For the time being, Hirano appears to be the favorite for saves in Arizona, and he followed up an ugly blown save in Colorado on Wednesday with a shaky but successful conversion against the Astros on Friday. This is a fluid situation to say the least, but the 34-year-old Japan native has been a trusted bullpen option for the Diamondbacks throughout his rookie season, so it would not be a surprise to see him record two or three more saves from here on out.

I threw out a $3 bid on Choi as a contingency bid in the event I missed out on Bruce, but as it turned out, I would not have won Choi anyway. Since making his debut for the Rays in mid-July, the 27-year-old has swatted seven homers while tallying 24 RBIs in just 42 games, and he’s playing every day now. Owners in deeper mixed leagues who are in need of a power boost could follow Ray Flowers’ lead and take a chance on Choi.

Considering that Stripling was one of the best pitchers in baseball for a good chunk of the first half, I like this $1 investment by Al Melchior. Note that the Tout Wars FAAB moves were processed before Stripling’s mediocre outing against the Cardinals on Sunday night, so I wonder if Al would have still went after him if the old midnight ET deadline were intact. The Dodgers righty was activated from the DL on September 7 after being sidelined for a month and has since allowed four runs over seven innings in three appearances, including two pitch count-monitored starts. Not great, but he’s also whiffed nine batters while handing out just one walk. This could be an issue of Stripling simply needing to shake off some rust. His matchup this week is a very favorable one, as the Padres rank among the bottom three teams in the majors in runs scored, batting average and OPS. Plus, in four appearances (three starts) versus San Diego this season, Stripling has given up just one unearned run in 17 2/3 innings while racking up 22 strikeouts.

Hello? Is this thing on?

There’s a three-team race in NL Tout Wars, but you wouldn’t know it based on the bidding the last two weeks. Once again, I was the high bidder in Tout, while two of the three contenders didn’t bid. I was surprised to find Jeffress in the free agent pool but figured I’d grab him and worry about where to use him later. With two weeks left in the regular season, I can move up three points with five additional saves. Jeffress won’t get all those by himself, but I have multiple closers in tow and am hoping Jeffress adds enough to make a difference.

The rest of the bids were a clean sweep by Phil Hertz of Baseball HQ. Hertz and I managed to squeeze Steve Gardner of USA Today out of his two attempts to grab saves. Part of the reason my bid was so high is I assumed Derek Carty of Rotogrinders would bid some of his $278 FAAB. He hasn’t bid in the last two weeks, so I got the players I wanted but I’m out of FAAB. The race could be determined by a savvy FAAB pickup next week.