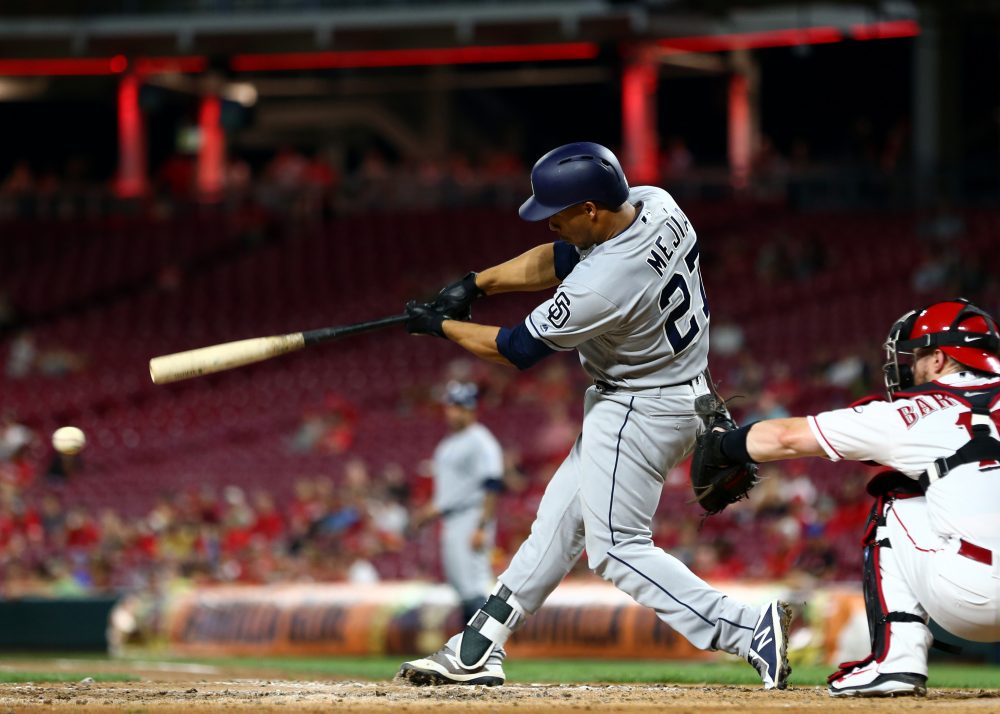 Candelario struggled in August to the tune of a .226/.300/.358 slash line with just eight RBIs, so it wasn’t much of a surprise to see Scott Engel of RotoExperts drop him last week. As it turned out, the timing of that move could not have been much worse, as the Tigers third baseman is fresh off a highly productive six-game week at the plate in which he batted .308 (8-for-26) with two homers, four RBIs and five runs. In making this $81 investment to acquire Candelario’s services, Scott Swanay is hoping that the 24-year-old can keep the good times rolling for a little while longer. Given his streaky ways this season, it’s certainly possible.

Although Mejia will share catching duties with Austin Hedges down the stretch, don’t be surprised if we begin to see more Mejia than Hedges as the season winds down. The rebuilding Padres would be well advised to give Mejia an extended look heading into 2019, not only from an offensive perspective but to see if he can handle the catcher position well enough to potentially open next season as the team’s starting backstop. The bottom line is that Mejia should get enough at-bats in September to make a meaningful impact in deep mixed leagues. Oh, and his two-homer game last Thursday has done little to temper our enthusiasm. Note that while Mejia isn’t catcher-eligible yet in Tout, he needs to make only three more appearances behind the plate to reach the five-appearance requirement for eligibility. The same rule applies for LABR.

Fresh off a dominant outing in which he blanked a dangerous Phillies lineup across seven innings, Alcantara will now get to face a Mets team that he limited to one run over five innings in his first career big league start back in June. There doesn’t seem to be a whole lot of downside in taking a chance on the 23-year-old top prospect for this week.

The enigma otherwise known as Jon Gray made his way to the waiver wire last week but his stay there didn’t last long. Interestingly enough, Jeff Zimmerman, the owner who dropped him seven days ago, was the one who reacquired him. I guess you can call it seller’s remorse? Anyway, these two moves were a bit surprising considering that Gray turned in a strong performance on the road against the Padres prior to Jeff releasing him but his most recent outing, at home versus the Dodgers, was shaky. He’ll face off against the Diamondbacks at home this week in a matchup that isn’t too scary but not too favorable either.

Zimmerman wasn’t done with his free-spending ways this week, also grabbing Yates, who was for some unknown reason dropped last week. Jeff is currently in the middle of a tight pack in the saves standings (I am unfortunately one of the other teams in that tight pack), so this could be 24 FAAB bucks very well spent. I tried to add Yates but after emptying out most of my remaining FAAB budget to buy Robbie Ray last week, I had only $10 at my disposal. Predictably, my $6 bid fell way short.

Gurriel is the other guy who I tried to purchase this week but to no avail. The biggest reason why Gurriel appealed to me is that he’s eligible at second base in addition to first base and third base, so replacing Yolmer Sanchez with Gurriel at my MI spot would represent a significant RBI upgrade. Although it has been a disappointing season overall for Gurriel, with a terrible second half mostly to blame, he has performed better of late, already with two homers and six RBIs this month. Plus, he’s getting everyday at-bats while hitting in one of the top lineups in baseball.

In Tout Wars, you can reclaim FAAB when releasing a player purchased at auction who is on the disabled list. This mechanism is customarily used in instances when a player is out for the season. Before the All-Star break, 10 times a player’s salary in FAAB is returned. After the All-Star break, five times the player’s salary is returned. This explanation is a long-winded way of saying I got back $100 in FAAB for Buster Posey and $50 for Jesse Winker and suddenly found myself with a FAAB windfall and almost no one good to spend it on. Mejia was the first of three players I purchased this week with a $65 bid. The former Cleveland prospect was traded to the Padres for Brad Hand in July and sent to San Diego’s Triple-A club. Promoted to the Friars early last week, Mejia generated significant attention with a two-home run performance against the Reds. Mejia had a down year with the bat at Triple-A, but his long-term ceiling as a hitter is high. His value this season is in question, given the lack of guaranteed playing time and utility-only eligibility in most formats. I’m hoping he gains catcher eligibility in Tout so I can move him behind the dish for the last week or two of the season.

Coming into 2018, Wisdom was viewed as a just-miss prospect, someone with power potential but too much swing-and-miss and not enough defense at the hot corner to survive on a major league club. While Wisdom’s walk and strikeout rates both improved somewhat, the biggest change in his 2018 Triple-A numbers is an extremely elevated BABIP. Wisdom was my second $65 purchase. He is starting at the hot corner for St. Louis and while his batting average would make him unacceptable in most leagues, the walk rate makes Wisdom OK to use in Tout. I have no hope of winning but am trying to do enough on offense to avoid the FAAB penalty in Tout next season.

Ross was my third and final $65 buy. My plan is to stream starters the rest of the way, and Ross will replace Zach Davies in my lineup. Ross wasn’t impressive in his minor league rehab, with only four strikeouts in 11 Triple-A innings and low 90s readings on the gun. But he looked better in his rain-shortened outing against the Cubs, getting as high as 97 miles-per-hour in an admittedly “adrenaline-fueled” performance. I’m not confident Ross will go deep enough in his next start to get a win, but I like the strikeout upside.

I won an AL-only home league in 2016 thanks to a combination of Gore steals and Andrew Bailey saves the last two weeks of the season. Fantasy baseball is silly. Hunter and Hicks could pick up saves for the Phillies and Cardinals down the stretch. Hunter has both of Philadelphia’s saves over the last two weeks while Carlos Martinez (yes, that Carlos Martinez) has two of the Cardinals’ four saves in the last 14 days. I grabbed Kieboom to replace Tony Wolters as my second catcher.

In the lone FAAB acquisition of the week in LABR NL, Yahoo’s Dalton Del Don, who had the most FAAB remaining of any team in the league, emptied his budget to purchase Mejia. While he’s an obvious add in any NL-only league, I chose to hang onto my five bucks as I have very limited mobility in the hitting categories and would rather save the funds to potentially address pitching. Howard Bender of Fantasy Alarm has resided in first place for virtually the entire season, but a race that once looked to be nonexistent could very well go down to the final day of the season. I currently sit just 1.5 points behind Bender. These final three weeks should be fun.

Lopez stole a little thunder from the NL playoff races this weekend by flirting with a perfect game in an otherwise meaningless Kansas City/Minnesota contest. Lopez pitched eight innings of perfect ball before a walk and a single ruined the bid. The former Brewer was making his seventh career big league start. Lopez has always had decent stuff; it was his difficulty with command that made the Brewers willing to part ways with the 25-year-old righty in the Mike Moustakas deal in July. But his command has been solid of late, so he’s worth using as a backend streamer, particularly with another matchup against the Twins on tap.

I’m somewhat surprised Pena was available in LABR, although this is partially a product of the more restrictive LABR roster rules. Pena has quietly put up a 3.14 ERA in his last seven starts, although his FIP is a more pedestrian 4.18 during that span and his strikeout rate isn’t special. His matchup against the Rangers at home is a good one and unless the Angels decide to shut Pena down or reduce his workload, he could have a two-start week next week.

Some teams aren’t promoting their prospects for the obligatory September cup of coffee like they used to back in the good old days when bread cost a nickel, making the lives of fantasy managers more difficult than it already is. The Tigers are cutting against the grain, promoting Stewart to give him some reps this month. Stewart is a power prospect with a decent batting eye whose contact skills are in question. He’s also a below-average fielder, which would matter more on a first division team with more viable options on the big-league roster. Stewart should play, in other words, and if you need home runs and aren’t too worried about average, he’s a good gamble for the last three weeks.

Tellez had some prospect buzz entering 2017, but since then he played poorly against Triple-A pitching in 2017 and was merely above average in his second go-round at the level this season. He’s a fun player with a great name, so it is good to see him in the majors. But despite the amazing results through 19 plate appearances, I’m expecting some regression from Tellez’s .444 batting average and .944 slugging percentage. Still, Tellez is playing and could pop a home run or three for your team down the stretch.

Speaking of playing time, Rickard is getting some for the 100+ loss Orioles. He has a little power and a little speed, and this is exactly the moment and opportunity in fantasy where you add players like Rickard to your AL-only rosters in the hopes of finishing fifth instead of sixth. Acquired from the Red Sox in the Ian Kinsler deal, Buttrey is a fastball/changeup pitcher who had great results at Triple-A this season with high strikeout rates. He picked up a save last week and could get more opportunities the rest of the way for the Halos.