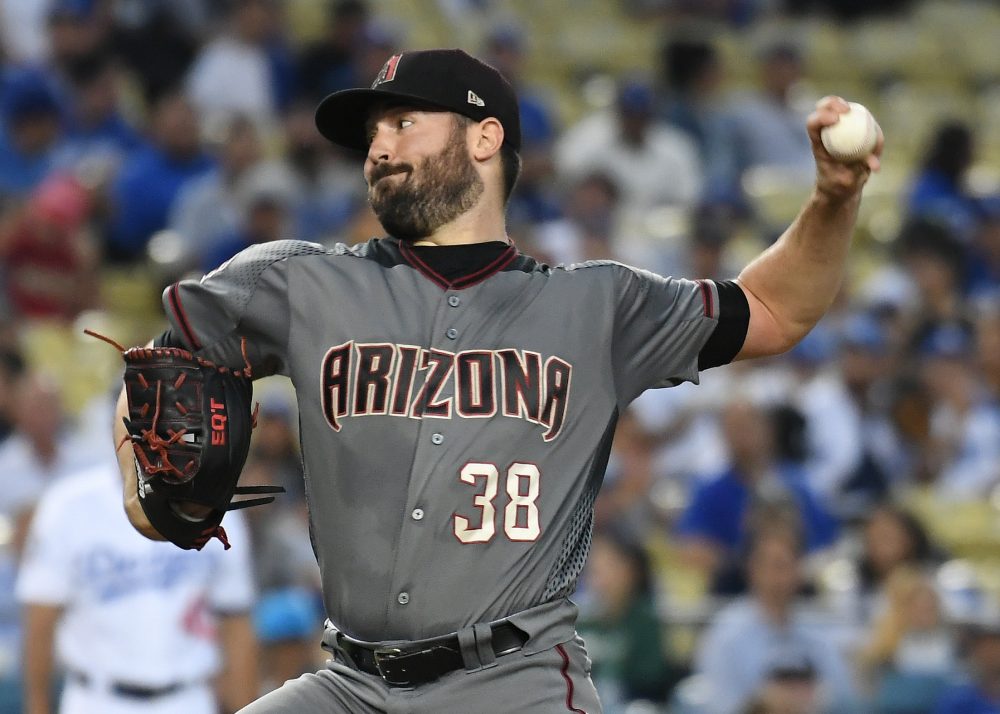 A few days ago, I was perusing the list of waiver wire pitchers, first sorting by strikeouts, as I always do. There was an interesting name heading the list, a guy who came into this season as a borderline top-25 SP but has been a big-time disappointment through the first five months of the 2018 campaign (4.55 ERA, 1.44 WHIP in 18 starts). Still, it was odd to see Robbie Ray‘s name on the waiver wire. The Arizona southpaw has been a lot better lately, pitching to a 3.24 ERA in five August starts, and the elite strikeout rate has been a constant all year. My starting rotation has been struggling for awhile now, and the upside Ray offered was too much to pass up. I would bid on him, and I would bid aggressively. So, with $92 remaining in my budget, the fourth-most in the league, I bid just enough to top all of the owners who trailed me in the FAAB standings. In the end, I was very surprised to win the bidding for Ray. None of the three owners who could have topped my $82 offering even placed a bid on him. An ultra-favorable matchup awaits Ray this week, as the Padres rank second-to-last in the NL in batting average, runs scored and OPS. Another factor that made the Ray addition a no-brainer move for me is that I’m in last place in the WHIP category by a wide margin. So, if he can be a difference maker in strikeouts in September while not doing major damage to my ERA, this will be a worthwhile investment.

Urias finally got the call to the big leagues last week and the early results have been decent, as he’s tallied one homer, two RBIs, three runs and a steal through six games. He’s hitting only .217 but considering that he’s a career .306 hitter in the minors, this should not be a concern. That said, the 21-year-old’s overall minor league numbers suggest that he might be a better real-life player than fantasy player, as he doesn’t really excel in either the power or speed departments. He’s still very young, however, so it’s entirely possible that he will develop more power. His September performance will go a long way towards determining the level of interest in Urias on Draft Day 2019, especially in non-keeper formats.

Well, it didn’t take long for McCann to find a home on a Tout Wars Mixed Auction league roster. The veteran backstop, who was activated from the DL over the weekend, has been sidelined since early-July after undergoing knee surgery. He’s batting just .203 for the season with a .593 OPS, so he’s obviously a shell of his former self. Plus, McCann is slated to split time with recent acquisition Martin Maldonado. But with the catcher position so thin these days and McCann still offering some home run potential, he was probably the best available option at the position.

Among all the messy closer situations around the league this season, the White Sox situation might just be the messiest. Ever since Joakim Soria was traded, the identity of the reliever who would get the next save chance has remained unknown until we actually see him enter the game in a save situation. Anyway, Fry seems to be the leader of the pack right now as he recorded the most recent save for the South Siders and was dominant in August, posting a 1.69 ERA and a 0.94 WHIP to go along with 20 strikeouts in 10 2/3 innings. It wouldn’t be surprising to see Fry finish out the season as the club’s closer. Then again, at this point, it wouldn’t be shocking if he doesn’t record any saves the rest of the way. Who knows. But at the price of four bucks, he’s a strong buy.

It’s rare to find a player on the waiver wire this late in the season who could make an immediate impact in any one category. The speedy Jankowski fits that description. His playing time has been inconsistent lately, which is likely what led Jeff Zimmerman to release him last week. But with 21 steals in 313 at-bats, Jankowski has proven that he doesn’t necessarily need to play every day to be deserving of a starting roster spot in a deep mixed league.

I threw out a conditional bid on Pena in case I missed out on Ray. But since I got Ray, Pena joins Al Melchior’s squad, and I really like this purchase. Serving as a starter for the first time in his big-league career, the 28-year-old righty has allowed three runs or fewer in five of his last six outings. As for this week, he should fare well against a mediocre at best White Sox lineup that he limited to two runs over six innings back on July 24.

Unless Freddie Freeman gets hurt or Atlanta clinches the NL East early, it is difficult to envision Duda being more than a pinch-hitter and 1x/week starter at first base. Even as a regular with the Royals, Duda was a relative disappointment in home runs. Teams with the most FAAB left were hoping Josh Donaldson would find his way to the NL. When this didn’t happen, the purse strings opened (relatively speaking) for much weaker players.

Toussaint slides into Atlanta’s rotation for at least one start, with a matchup later today against the Red Sox. Toussaint’s story has remained the same for much of his professional career. At his best, he has ace-caliber stuff, but he is maddeningly inconsistent, making too many mistakes in-game to survive a major league lineup. He fared well against the Marlins in his major league debut last month, but Boston is a much tougher draw. Some believe Touki’s future is as a shutdown closer.

I acquired both these pitchers. My best chances at gaining points are in wins and strikeouts, so I went for a favorable matchup in Detroit with Poncedeleon and two risky home starts for Davies. Poncedeleon is the more promising starter the rest of the way. I wouldn’t use Davies unless you are doing what I am doing and solely focusing on wins and strikeouts, even in an -only league.

I could have saved $26 on Poncedeleon and Davies, but at this point of the season, it’s worth bidding to acquire the players you want as opposed to waiting to spend $150-200 in the last week of the season. Morrow is a potential steal at $2 if he closes again for the Cubs, and with Steve Gardner of USA Today 2.5 points behind Grey Albright of Razzball, every point matters.

Barring an injury (or two), Granderson’s playing time with the Brewers will be very limited, but Grandy does have a track record and Steve Gardner of USA Today had a league-leading $13 remaining in his FAAB budget, so the inflated $7 price tag isn’t all that surprising. Shaw could prove to be a fine addition for Brian Walton of Creativesports 2.0, as he’s expected to serve as San Francisco’s everyday left fielder down the stretch, and (forgive me if you’ve heard this before) playing time alone carries value in an -only league. The former first-round pick launched 24 homers in 101 games at Triple-A Sacramento this season.

I cleaned out the rest of my FAAB to add McCutchen to my faltering, stumbling team. He won’t be enough to save my struggling offense, but this move was a no-brainer, even though it means I’ll lose a lot of roster flexibility without any FAAB. Ray Flowers of Sirius XM had $26 but only bid $17. I would rather feel bad about needlessly spending all my FAAB than feel bad about missing out on McCutchen.

Valdez is a potential steal, even with multiple teams out of or nearly out of FAAB. I cut Swihart last week, as I finally reached a situation where I had too many catchers. Adrianza has provided sneaky value for AL-only fantasy managers this season.