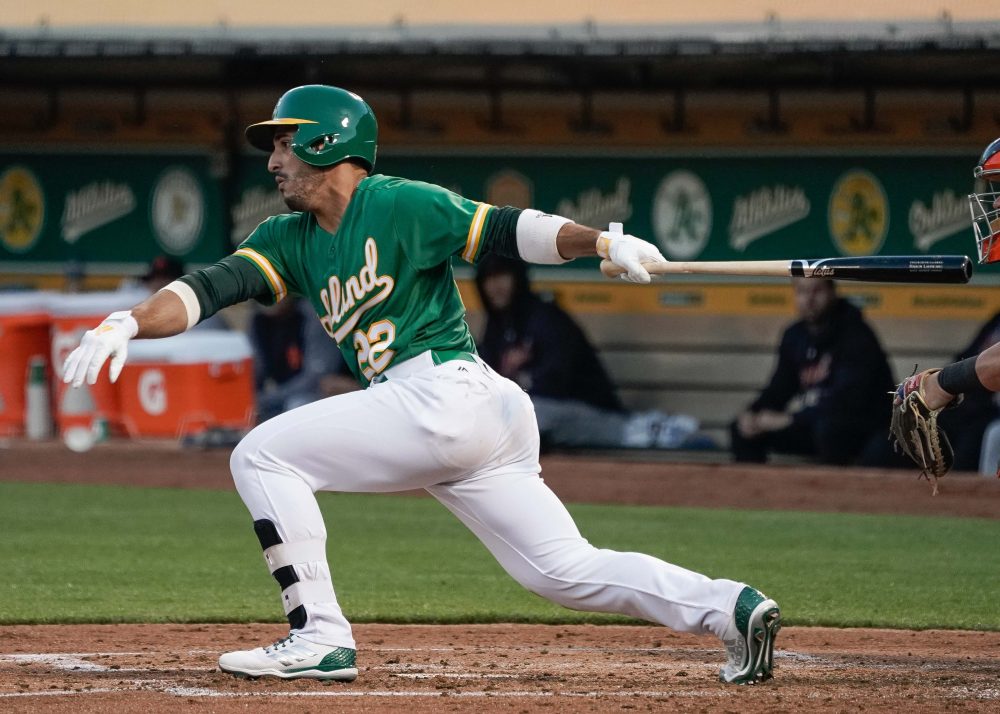 For the first time this season, I was the buyer of the most expensive FAAB acquisition, and I expected much more interest in Laureano. The promising rookie is off to a strong start with the A’s, batting .280 with three homers, 10 RBIs, seven runs scored and three steals through his first 18 big league contests, this after hitting .297 (.380 OBP) with 14 homers and 11 swipes in 64 games at Triple-A Nashville. Judging from his previous minor league numbers, the power-friendly PCL likely played a role in his high home run total this season, as expecting 20-plus homers over the course of a full major league campaign is probably unrealistic. But the speed is legit, and since I’m currently in the middle of a tight pack in the stolen base standings, Laureano is a welcome addition to my squad as an impact speedster who can also contribute in the other categories.

Me again. Well, my decision to preemptively scoop up Welington Castillo in anticipation of his return from suspension has backfired big-time, as I ended up dropping Maldonado, who served as my second catcher for two and a half months to that point, in order to add Castillo. And it just so happens that Maldonado is coming off his most productive week of the season while Castillo is now on the DL. What a mess. Hopefully, Maldonado can stay hot for a little while longer.

Scott Engel made the Melancon buy before the veteran righty recorded the save for the Giants on Sunday. Now that Melancon has picked up two saves in two days, this purchase is looking more interesting. Still, the reason why Melancon got the save on Saturday is that he was needed to bail out closer Will Smith, and the reason why the team turned to him in the ninth on Sunday is because Smith had worked three days in a row. Smith has been dominant in the closer role since inheriting it a couple months ago and would need to struggle for an extended period of time before the club would consider replacing him with Melancon.

My staff ace to open the season, Martinez found his way to the waiver wire after I decided that a $130 FAAB rebate (drafted players who land on the DL can be released in exchange for a FAAB amount that is calculated based on their auction price) was worth more than whatever production he could give me while pitching out of the bullpen. So now, Martinez has found a home on BP colleague Bret Sayre’s squad. He did pick up a win in relief on Friday and could turn out to be a decent deep-league option down the stretch as a multi-inning reliever who can rack up some strikeouts. But all indications are that there is zero chance of him making another start this season, so his upside is limited.

This is a pure matchup-based move by Jeff Zimmerman. Gaviglio, coming off one of his finest outings of the season in a victory over the Orioles, heads into a two-start week with a pair of matchups that are as favorable as it gets. In addition to a rematch with the O’s, the Blue Jays righty will face off against a Marlins team that ranks last in the majors in OPS. Gaviglio is certainly risky, but if you are ever going to take a chance on him, this week is the time to do it.

The owner of only 12 career saves, Neshek might be the leading candidate to close right now in a Philadelphia bullpen that has been in flux all season. The 37-year-old earned the most recent save and Seranthony Dominguez has pitched to a 9.00 ERA in August. Even if Neshek collects only a few saves from here on out, he will easily earn the $7 price.

Let’s face it, Kinsler really shouldn’t be on the waiver wire in a 15-team mixed league, so the fact that three bucks was all it took to buy him and only two owners placed a bid on him was surprising. Kinsler is the starting second baseman on an elite offensive team and while he’s no longer a 30/30 guy, he can still contribute in both the power and speed departments. I originally placed a bid on him (and it would have definitely exceeded $3) but my middle infield situation is crowded and I ultimately decided to stick with the players on my roster. That decision could turn out to be a mistake.

It is that time of year, when opportunity frequently trumps ability where fantasy pickups are concerned. Stratton sports an ugly 5.36 DRA in 107 1/3 innings, and while he has shown flashes of improved performance, he isn’t a reliable option going forward. However, Stratton has two favorable home starts this week against the Mets and Diamondbacks. Steve Gardner of USA Today nabbed Stratton. Gardner is in what has become a two-team dogfight with Grey Albright of Razzball, whose 35-point cushion in June has dwindled to a mere 4.5-point lead. Gardner has the ERA/WHIP cushion to withstand a few bad starts and could easily jump a point or two in strikeouts. Context is everything this time of year and the free agent pool in Tout NL has been bereft of starting pitching.

The last two weeks cooked the already slim chances I had of winning NL Tout. There is far too much pathos to get into in this space; I’ll discuss this at length in my sad recap in October. I added Pirela because I desperately need plate appearances to save my sinking offense. I added Wolters because I have Buster Posey and the Giants backstop will be sidelined for the rest of the season after undergoing hip surgery today.

Well, that was quiet. With the MLB waiver trade deadline only a few days away, a logical FAAB strategy in an -only league this week, with no obvious pickup candidates, was to lean on the conservative side in anticipation of some more impact crossover players. As for the guys who were added, Casali has been getting regular playing time since Joey Votto landed on the DL, sharing first base duties with fellow backstop Tucker Barnhart, and he’s been productive. Votto wasn’t ready to come off the DL when first eligible on Sunday, so Casali’s period of increased fantasy relevance could last a bit longer than originally thought. Dean has been playing often enough since making his big league debut a couple weeks ago to be useful in non-mixed formats. He’s already launched two homers through 10 games, but his minor league track record suggests that we shouldn’t expect a lot from him when it comes to power.

Only 24 years old, McKinney has been part of three significant July trades involving Addison Russell and Jeff Samardzija (Athletics), Aroldis Chapman and Gleyber Torres (Yankees) and J.A. Happ (Blue Jays). The former first-round pick was blocked in New York and seemed blocked in Toronto, but the Jays put McKinney in the lineup and thus far he has responded with three home runs in 33 plate appearances. McKinney came to New York with a downward plane on his swing, but the Yankees coaching staff worked with him to change his approach, resulting in a home run spike both at Triple-A and now in the majors. McKinney has the strength and athleticism that suggests this change could stick. I bid $3, falling short to Gardner.

Even accounting for a mid-season hand fracture that cost him two months, Delmonico has been a significant disappointment. Entering the season, the 26-year-old outfielder had a clear path to playing time on a rebuilding White Sox squad but couldn’t capitalize, losing some of the power from 2017 and seeing his plate discipline falter as well. Delmonico has flipped this narrative over the last two weeks, with four home runs in his last eight games dating back to August 17. He had slipped into a part-time role, but a Jose Abreu injury could open up time for Delmonico at first base. I bid $3 and lost out to Dave Adler of Baseball HQ. I had $30 FAAB remaining and could have been more aggressive but I’ve decided to prioritize pitching the rest of the way.

Voit has thump; the knock on him throughout his professional career has been a lack of plate discipline, leading to an approach that has allowed advanced pitchers to eat him alive (not literally, gross). In 45 plate appearances for the Yankees, Voit has shattered this perception, mashing four home runs but perhaps more importantly carrying over improved plate discipline. There’s a punchline somewhere in here about “advanced pitchers” and “the Baltimore Orioles”. Unless the Yankees make an 11th hour waiver trade for a first baseman, Voit will continue to steal at-bats away from Greg Bird, at least if he continues to hit with this level of authority.

I enter tonight’s action in third place, 12 points behind Glenn Colton and Rick Wolf. My strategy to gain points on offense is “insert Jose Altuve and Mike Trout back into my lineup and profit!” On the mound, I need to take targeted risks with starting pitchers and maximize matchups. Felix was understandably dropped a couple of weeks ago, but a two-start week with one of those starts coming at San Diego is worth the speculative add in late-August. There is no sugarcoating how bad Felix has been. I have reached the juncture of the season where playing for wins and strikeouts and worrying less about ERA/WHIP is the correct play, although I can’t afford to have Felix completely blow up in both starts.

Mahtook has a little pop and a smidgen of speed but the appeal in an AL-only (stop me if you’ve heard this one before) is that he is a starter and is getting at-bats. Mahtook should play regularly for the Tigers down the stretch and even though the batting average could be tough to swallow, he should do enough everywhere else to make him acceptable as a fifth outfielder.

If you can’t pick up a two-start pitcher, going with a start against the Orioles is the next best thing. This is the perception, at least; the Orioles offense has picked it up in the second half and they aren’t always a pushover. Lowe hasn’t done much but I like him as a flier at $1.