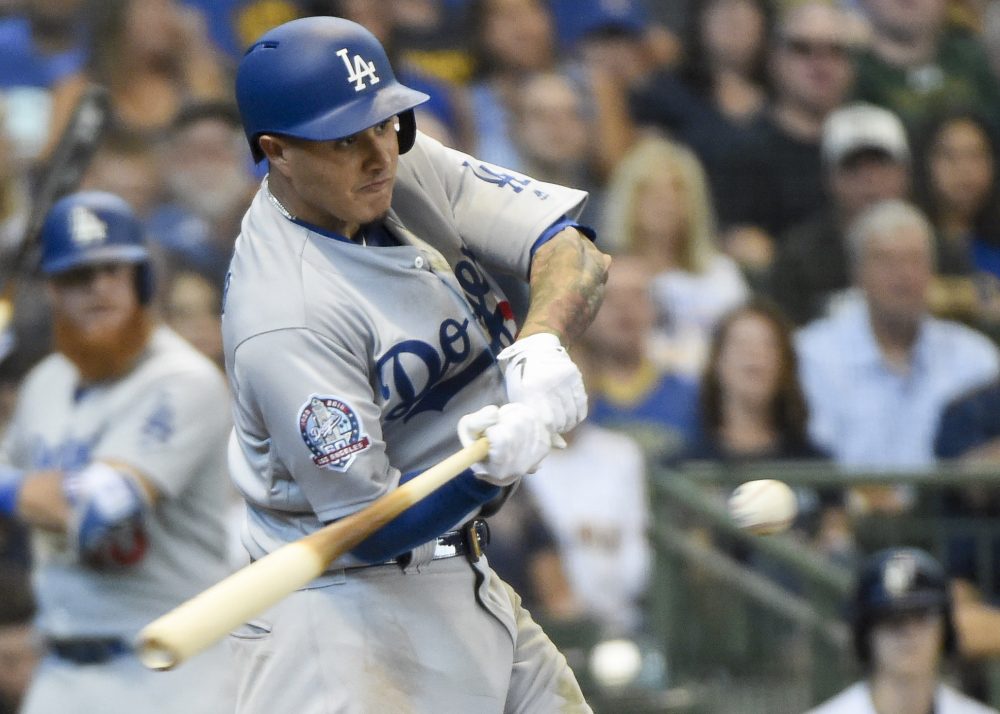 Eric Karabell of ESPN had the hammer and Eric Karabell of ESPN used the hammer to grab Machado, most likely the biggest crossover player prize of the season. A quick look at the league standings reveals that Karabell, who currently resides in sixth place, is tied for second-worst in hitting points, so he’s hoping that Machado can help him make up some ground in hitting to move up a spot or two in the overall standings. The chances of anyone catching Fantasy Alarm’s Howard Bender (15-point league lead) remain slim to none.

I almost placed a bid on Hampson but knowing that with $65 remaining, I’d have the third-most FAAB dollars in the league following the Machado purchase, I decided to save my money for a more impactful crossover player, with starting pitching being a bigger need for me anyway. I might regret this decision, as $9 could prove to be a bargain buy for Derek Carty and there might not even be three more worthy crossover players. If Hampson was assured regular at-bats from here on out, I might have bid 10-plus dollars, but that’s not the case.

Holland has been picked up and dropped multiple times. He even resided on my roster while Joey Lucchesi was sidelined, and he pitched well. Jeff Samardzija‘s return trip to the DL has in all likelihood allowed Holland to make a return trip to the starting rotation. Holland should be considered a fringe mixed-league option for the time being, so he obviously deserves to be added in a deep NL-only league.

Scheduled to make his first career major-league start this week, Gomber sports a solid 3.77 ERA in 15 relief appearances for the Cardinals this season. The eight walks in 14 1/3 innings is somewhat concerning but Gomber has issued only 20 free passes in 68 1/3 innings at Triple-A this year, so with time, improved control at the big-league level is likely. It’s unclear at this point whether Gomber will get another start with Carlos Martinez expected to return from the DL next week.

De Los Santos was optioned to Triple-A on Friday, but with LABR rules allowing owners to roster players sent to the minors without having to start them, this is a clever stash move by Rotowire’s Jeff Erickson.

Based on how the races in the AL and NL are transpiring, it’s likely that AL-only bidders won’t see nearly the same influx of talent from the “other” league as NL-only squads will. This was the case this week with the players who came into the AL. While Hand and Jeurys Familia (see below) will be useful pieces in an AL-only, they won’t nearly have the value they would if acquired to close by their respective teams. Hand could supplant Cody Allen if the latter slips but while Allen’s ERA is subpar, his DRA shows a pitcher who has pitched as well as he did in 2017 and is just a tick below the elite relief arms in baseball. I bid $5 on Hand. Bids at this point of the season have as much to do with FAAB remaining and future needs, and I decided that $12 was too much to spend given the money I have left and the future pitching speculation I will likely need to make to stay in the race.

While I was unable to obtain Hand, I did grab Familia for $5. This is not a saves play. I am last in the category and it is unlikely I will be able to gain more than a point. The hope with this bid is that I can move up in the standings in wins and that the Athletics use Familia in high leverage, non-save situations. Familia hasn’t been as good as Hand this season. but he is better than many of the low-end free agent relievers available in the pool.

I bid $1 on Goodwin but lost out to Steve Gardner of USA Today. Goodwin was traded by the Nationals to the Royals for minor league pitcher Jacob Condra-Bogan. Goodwin was buried in the Nationals outfield but has an opportunity to win a starting job in Kansas City given the paucity of options for the Royals. He fits that “tweener” profile of not quite having enough defensive chops to survive in center and not quite enough of a bat to live in a corner outfield position. In fantasy, opportunity sometimes trumps ability and Goodwin could produce at a 15-home run/15-steal seasonal pace if he plays every day.

Both of these $1 purchases were mine. Nunez has done poorly this season in major league stints with the Orioles and Athletics but with the Orioles in selling mode, he has an opportunity to play full-time. He hit 32 home runs in 533 minor league plate appearances in 2017 and while that comes with the usual PCL caveats, that’s still solid at any level and Baltimore is a hitters’ park. I’m not confident Nunez does much of anything but at $1, I have next-to-nothing invested if he fails.

D.J. LeMahieu’s oblique strain has opened the door for Hampson to show what he can do at the big league level, and it’s safe to say that Tim McLeod is optimistic, as he was comfortable throwing out a triple-digit dollar bid for Hampson’s services. Colorado’s third-round pick from 2016, the 23-year-old boasts a .309/.379/.463 slash line in 92 games between Double-A and Triple-A this season. While he doesn’t carry much upside in the power department (nine homers this year), Hampson has already swiped 33 bags in the minors this season. LeMahieu’s return timetable is still up in the air, so if Hampson does indeed see everyday playing time at second base for at least a few weeks, he could be a true difference maker in mixed leagues thanks to his ability to post a high OBP and steal bases.

One of the more maddening pitchers to own in all of baseball, it’s been more of the same for Gausman this season, as his overall inconsistency is baffling. The encouraging news is that prior to his last outing, in which he gave up five runs on 12 hits over five innings in a loss to the Phillies, Gausman had allowed three runs or fewer in six straight starts. The other bit of good news is that after a brutal first half last season (5.85 ERA, 1.76 WHIP), he turned things around in a big way following the All-Star break (3.41 ERA, 1.20 WHIP). Ray Flowers of SiriusXM is hoping that history will repeat itself. I considered bidding on Gausman, as he is a tempting two-start pitcher option. But ultimately, the matchup versus the Red Sox scared me off.

There was some speculation that Hudson would get called up by the Cardinals to make an early-week start in place of the injured Carlos Martinez, but we’re not 100 percent sure yet. Hudson is putting together an exceptional season at Triple-A Memphis (13-2, 2.36 ERA in 18 starts), though his low strikeout rate (7.1 K/9) limits his fantasy ceiling. Even if he doesn’t make a start this week, he shouldn’t have to wait much longer to get the call, so this could prove to be a fine purchase by Fred Zinkie, as Hudson’s FAAB cost could increase significantly very soon.

Now that the Padres have traded their Opening Day closer, Brad Hand, rumors are swirling that Hand’s ninth-inning replacement, Kirby Yates, could be on his way out as well. If those rumors end up being a reality, Stammen, who has pitched to a stellar 2.91 ERA and 1.17 WHIP with better than a strikeout per inning through 42 appearances this season, has to be considered the most likely choice to take over closing duties in San Diego. Rather than follow the more costly route of waiting for a Yates trade and then reacting, Ray Flowers decided to act now and take advantage of the discounted price.

In my lone purchase of the week, I chose to reunite with an old friend, as I drafted Robertson in the reserve rounds back in March before a roster crunch forced me to drop him early last month. With unfavorable matchups on the schedule this week for a few of my starting pitchers, I figured I’d use Robertson in one of those active spots. And after watching Aroldis Chapman completely melt down on Saturday, is it crazy to wonder if he might be dealing with some sort of injury? Chapman is probably fine but there isn’t any downside to a $7 investment in Robertson. And by the way, I was fortunate to get him as Ray Flowers actually bid $13 but only as a contingent to his winning bid on Stammen.

Nine-hundred and seventy-two dollars? Out of a $1,000 budget? That seems like a lot of money for any player. What the heck is Tristan Cockcroft of ESPN thinking? That’s an enormous bid and it’s probably not going to be enough to push him over the top. I hate to criticize any fantasy expert, but I cannot believe that Cockcroft made that move.

(looks up who Manny Machado is on Baseball Prospectus, looks at his numbers, blacks out for 10 minutes)

Wow, turns out Manny Machado is good. Looks like I spoke far too hastily. Great job on all the Machado bidding, Tristan.

I dropped Williams after losing patience with him and Scott Wilderman of OnRoto picked up the Pirates starter for a two-start week. Edwards is a great snag at $8. I would have loved to add him, but my staff is already overloaded with relievers. Maton could close in San Diego if Kirby Yates is traded.