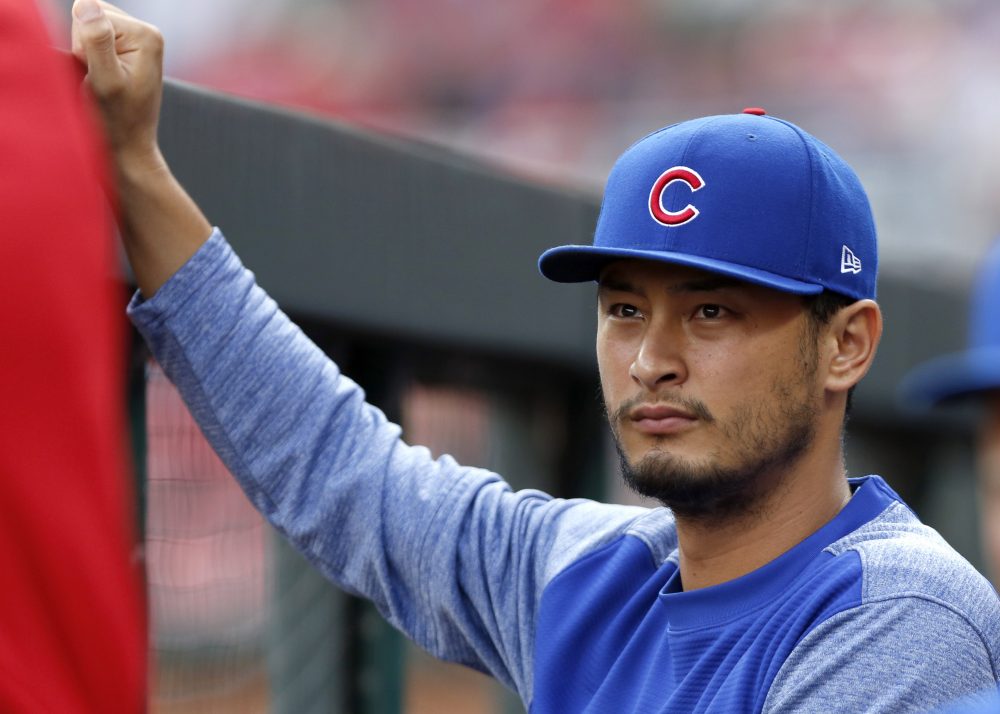 Tout Wars rules stipulate that all FAAB purchases must remain in active lineups for the scoring period immediately following the acquisition. So, the short week coming out of the All-Star break has always been a popular time to stash prospects or injured players since the lineup cost is only a few days of empty stats as opposed to a full week. With unlimited DL spots in Tout, stashing injured players is especially appealing since no corresponding drop is required. Darvish, sidelined for nearly two months now with triceps and elbow injuries, was released last week in exchange for a FAAB rebate, which pre-All-Star break equals auction dollar value times ten. He was an obvious candidate to be scooped up this week. I threw out what I thought would be a competitive $12 bid for Darvish’s services, but my bid turned out to be nowhere near Fred Zinkie’s winning bid. Last weekend, it was reported that Darvish hopes to throw off a mound this weekend, which is good news. Still, there’s no timetable for his return, so it remains to be seen if Darvish can make a meaningful fantasy impact in the second half.

It’s been a rough season for Rosario offensively, but he’s beginning to show some signs of life at the plate lately with a .804 OPS in July. The Mets shortstop entered the free agent pool last week but Ray Flowers made sure that his stay there was brief. Although Rosario isn’t exactly a sure thing to provide consistent mixed-league value the rest of the way, his recent play combined with the “upside” factor makes him well worth a roster spot in a 15-teamer.

Needing an extra starter to maximize my counting stats for the short week, I settled on Straily as the best available option. And I got him for what turned out to be an overbid, though I was kind of surprised that there wasn’t more interest in him. Consistency hasn’t exactly been Straily’s strong suit this season, but the Marlins righty has earned a quality start in each of his last four outings while pitching to a 3.20 ERA and a 1.07 WHIP. Next up is a matchup against a mediocre at best Rays offense, so I’m cautiously optimistic.

Here’s an example of a purchase that would probably not be made in a normal week, as Frazier is back in the minors with no clear path to playing time barring an injury. But I’m fairly certain that the biggest reason why Scott Swanay decided to bid on Frazier has to do with the upcoming trade deadline and the decent chance that the Yankees will deal him for pitching. If Frazier does indeed find a new home and is given regular at-bats, his $24 price tag could be a huge bargain.

My second purchase of the week, Jeffress serves two purposes. First, he will fill an active pitching slot in place of one of my starters who will not be making a start in the next four days. Second, I am a Corey Knebel owner, and Knebel has been shaky of late, so Jeffress will assume a “handcuff” role, at least for the short-term.

The short-week stashes were not limited to Darvish and Frazier as BP colleague Bret Sayre joined in on the fun with his buys of Peter Alonso and Jung-Ho Kang. Elsewhere, Fred Zinkie added Ryan Braun to his squad and Tim Heaney took a flier on Julio Urias. I thought about bidding on Kang and Braun, but hitting simply isn’t an area where I’m desperate for upgrades via the waiver wire, and in the case of Braun, it’s not like he’s performed well even when healthy this season.

Yasiel Puig’s oblique injury briefly led to a starting outfield role for Toles, but the Manny Machado trade (he wasn’t eligible for bid this week, more on that below) will likely push Toles into a part-time or platoon role. Injuries have taken some of the luster from the former Rays farmhand, and the speed that Toles showed in the low minors for Tampa never materialized with the Dodgers. Before the Machado trade went through, I considered putting down $60-70 on Toles but one look at Los Angeles’ crowded outfield made me decide to pass.

Reyes’ usefulness as a viable member of a major league roster has faded into oblivion, and without the steals, there’s little reason to recommend him as a useful component from a fantasy perspective, even in NL-only. Even with quasi-regular playing time the last three weeks, Reyes has a woeful .167/.231/.222 line in 36 plate appearances with no stolen bases.

I spent a healthy chunk of my FAAB earlier this year so my chances of competing in the Machado sweepstakes had long evaporated. However, I took advantage of the short week to trade enough of my FAAB ($127) to Tristan Cockcroft of ESPN to put him over the top for Machado this coming Sunday. I acquired Jesse Winker, who is on pace to earn $20 in NL-only 5×5 OBP. My offense has been down a piece or two all season long. Adding another runs/RBI source will provide a boost I need in a race that has suddenly become closer than it was a month ago. There was also an element of gamesmanship to this move. Cockcroft is lower in the standings than some of the other teams I could have traded this FAAB to and hopefully his team will pass first-place Grey “Is it Gray? Or Grey? I can never remember” Albright in home runs and RBI, knocking two points off Albright’s overall total.

I expected this week to be a very quiet one on the FAAB front in LABR NL, but I still expected more than three purchases. Then again, this wasn’t a major surprise with most owners hanging onto as many FAAB dollars as possible as we approach the July 31 trade deadline, when several crossover players will (hopefully) follow Manny Machado‘s lead and join the free agent pool.

The only multi-dollar and contested winning bid was for Chris Owings, who was actually bought for $12 at the auction back in March but released last weekend. After showing some promise as an across-the-board contributor last season, Owings has been a major disappointment this year, batting a meager .194 with only three homers, 18 RBIs, 27 runs scored and seven steals through 80 games. But he’s still receiving regular at-bats, and that factor alone makes him a viable option in a deep NL-only league. If he can somehow find a way out of his season-long cold spell, adding Owings could prove to be a great move by Derek Carty.

With eight uncontested moves in LABR (none of them mine), this would be a good time to see how I’m doing.

Except for a few days earlier this month, Link has been in first place all season, mostly on the strength of his pitching. Justin Verlander and Blake Snell have been a formidable one-two punch but having Eduardo Rodriguez and Mike Clevinger as a #3-4 combo has made Link’s rotation solid almost all the way through (Jake Junis, don’t read this). Offense is Link’s Achilles heel. Giancarlo Stanton is a great anchor, but depth is lacking and no player on Link’s team has more than nine stolen bases. However, Link isn’t dumping any categories, so he has significant upward mobility on offense if he can make a trade. He only has $37 left in FAAB. Unless there is a mass exodus of players from the NL to the AL, Link isn’t going to find help via the Senior Circuit.

My team has mostly played to its projection, doing very well on offense while the pitching has been below average. The “stars” part of my stars and scrubs team has worked beautifully. Mike Trout ($41), Jose Altuve ($37) and Francisco Lindor ($41) have combined for $119 of earnings (pace) on my $114 investment. The profit has come from Lindor, but Trout and Altuve are essentially returning par. The rest of the offense has been a mixed bag. Shin-Soo Choo ($26) has been terrific but Jason Kipnis and Jeimer Candelario are barely on pace to return value on what I paid while Lucas Duda has been a moderate loss on my $10 investment. I’ll need some of my second-tier hitters to step it up in the second half.

Charlie Morton has been great, but not enough to raise my pitching staff above mediocrity. I traded Adam Jones for J.A. Happ in May but Happ has been up-and-down all season long. David Price has mostly scuffled and unlike in 2017, the FAAB purchases I have made to bolster my rotation haven’t helped. Even my relievers haven’t really helped my ratios. I didn’t purchase saves at auction and haven’t lucked into a cheap closer via auction or FAAB. You can’t stream starting pitchers in LABR unless you pick them on reserve on Auction Day. James Shields has been decent in this role (don’t laugh, this is AL-only) but mostly to keep me afloat in strikeouts. I’ve abandoned the idea of grabbing saves via trade and will focus mostly on trying to get to 35 points overall in pitching. It’s possible, but I’ll need one of Happ or Price to come through down the stretch.