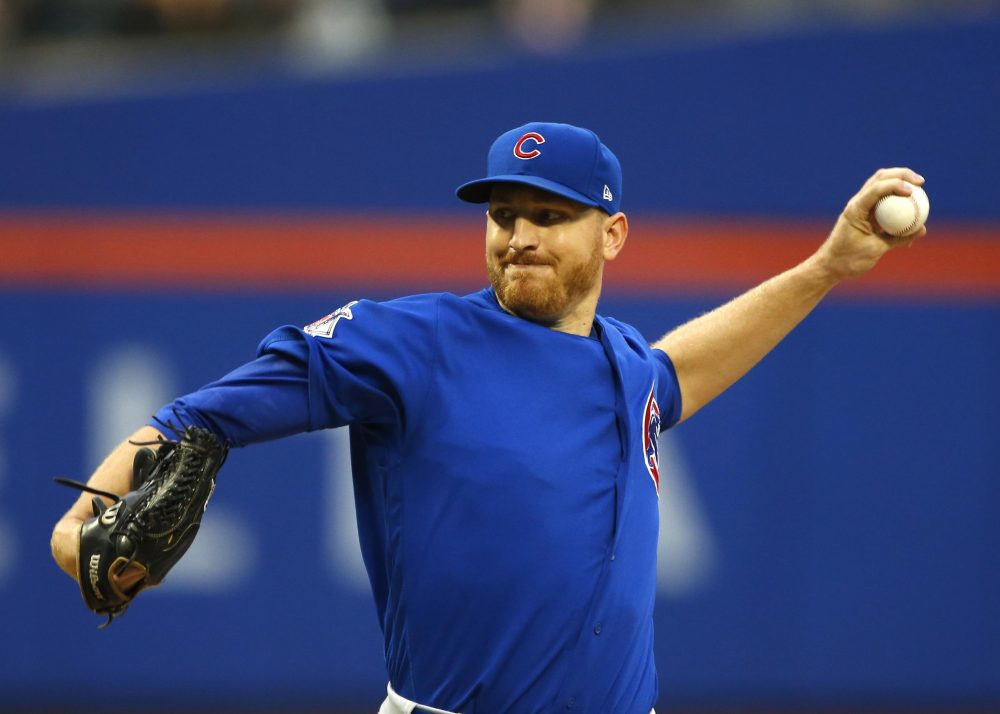 In two starts since stepping into the Cubs’ rotation as a fill-in for the injured Yu Darvish, Montgomery has allowed a combined one run on four hits and one walk across 11 2/3 innings. That’s pretty good. Manager Joe Maddon has announced that Montgomery will indeed be making his next start this week, a rematch against a Pirates lineup that he held scoreless over 5 2/3 innings on May 28. So naturally, he was a must-add in this deep NL-only league. With Darvish expected to be sidelined for at least another couple of weeks, Montgomery could provide RotoWire’s Jeff Erickson with some bang for his 11 bucks.

Erickson’s spending spree was far from over, as he also nabbed Cozens, who has posted some impressive power and speed numbers at Triple-A this season (ten homers and seven steals through 50 games). With Rhys Hoskins on the DL, Cozens could find his way into Philadelphia’s lineup enough to carry short-term appeal in NL-only leagues.

Erickson’s third and final purchase of the week, Vargas is coming off a strong outing versus a tough Braves lineup in which he allowed a mere two hits over five scoreless innings. The problem is that his season numbers, which include an ERA of 8.53 and a WHIP of 1.86, are still brutal. But in case you forgot, this is a 12-team NL-only league.

Santana struggled in his big league debut, a relief appearance at Coors Field in which he allowed five runs on six hits in 3 2/3 innings. But it was Coors Field. Better results should be expected from the promising prospect when he makes his first major league start this week. He’s certainly worth a shot in NL-only formats.

A former Cleveland prospect, Rodriguez signed with the Tigers as a minor league free agent in December. Rodriguez is past the shelf life of what is typically considered a “prospect”, but after years of being known primarily as a defense-first player, he’s had a renaissance with the bat in 2018, hitting eight home runs and stealing eight bases in 209 Triple-A plate appearances before getting the call to the Motor City. Ron Gardenhire told reporters that Dixon Machado is no longer the everyday second baseman, so Rodriguez will see reps there as well as at shortstop and third base. I would have bid a dollar or two on him if he had third base eligibility, but I am already starting four middle infielders and did not want to bench sudden source of speed Jose Iglesias this week.

It was a very quiet week in LABR. I made a minor trade with Tristan Cockcroft of ESPN, flipping Abraham Almonte for Alex Claudio. I was going to drop Almonte anyway, so while Claudio isn’t anything special, I did get something for nothing. Claudio has quietly brought his ERA down to 3.68 after an awful start to the season and has four wins out of Texas’ bullpen. If Keone Kela gets hurt, Claudio could be in line for saves.

After a rough start to the season, Williams is fresh off a solid month of May in which he batted .293 (.369 OBP) with five homers. Everyday playing time has not been a given for Williams this season but he should be receiving regular at-bats at least while Rhys Hoskins is on the DL. So for now, he could be a decent source of homers for BP colleague Bret Sayre.

Bret’s spending run continued as he also grabbed Munoz, a 23-year-old rookie who sports a .298 batting average with two homers, 11 RBIs and a pair of doubles through 57 big league at-bats as the replacement shortstop for Paul DeJong. Munoz stole 22 bases in the minors last season, so there’s a speed component to his game as well. He will either slide into a reserve role or head back down to the minors once DeJong comes off the DL, but DeJong isn’t expected to return until early-July, so there’s plenty of time available for Munoz to make a fantasy impact.

While I did throw out the $18 bid on Bader, it was only a contingency bid in the event that I lost out on Johnny Field. But the more I think about it, the more I think the order should have been reversed, but I would not have bid $56 on Bader anyway, so thinking about this for even another second would be a complete waste of time. With five homers and six steals through 96 at-bats this season to go along with a .281 average and a .361 OBP, Bader has emerged onto the mixed-league radar. There’s playing time risk here, as the Cardinals have only two available outfield spots for the trio of Bader, Tommy Pham and Dexter Fowler. But with the latter two players both struggling, Bader has a legitimate opportunity to earn and keep a starting job.

Needing a short-term fill-in for the injured Mookie Betts, I decided that Field would be my top target, and I was able to add him without paying much. In addition to having a really cool baseball name, the 26-year-old is playing every day right now and offers some power (six homers in 34 games so far this season). But it was his speed that stood out most, as he’s swiped two bags over his last five games. With Delino DeShields in the midst of a prolonged cold spell and Betts sidelined, stolen bases have been hard to come by for my squad lately, so maybe Field can steal a few bases for me before Betts returns.

Now this is getting interesting. After tossing seven innings of one-run ball in a victory over the Marlins this past Friday, Buchholz boasts a 1.50 ERA and a 0.67 WHIP through three starts this season. He will next take the mound at pitcher-friendly AT&T Park versus a Giants lineup that is far from scary, so Clay could turn out to be a fine cheap buy for Scott Engel.

It was a rare quiet FAAB week for the Mixed Auction Touts, especially in terms of total dollars spent. After shelling out a good chunk of money in recent weeks, my goal was to address my one major temporary need without overpaying, and I think I did that with Field. Hopefully, Betts will return when first eligible on Friday, making the Field experiment an abbreviated one.

Sixteen players were purchased in Tout Wars this week but 13 of the 16 bids were uncontested and no bid was higher than $43. I purchased Sogard at $4 to replace Tyler Saladino, who I had picked up a couple of weeks ago to replace David Bote who I picked up a couple of weeks before that to replace Sogard. I tried to trade for a middle infielder but couldn’t close the gap via that avenue. I did make a small trade, moving $18 of FAAB to Phil Hertz of Baseball HQ for Chad Bettis. Bettis has a 2.03 ERA in 44 1/3 road innings this season, so he is a pure road streamer/match-up play for my team.