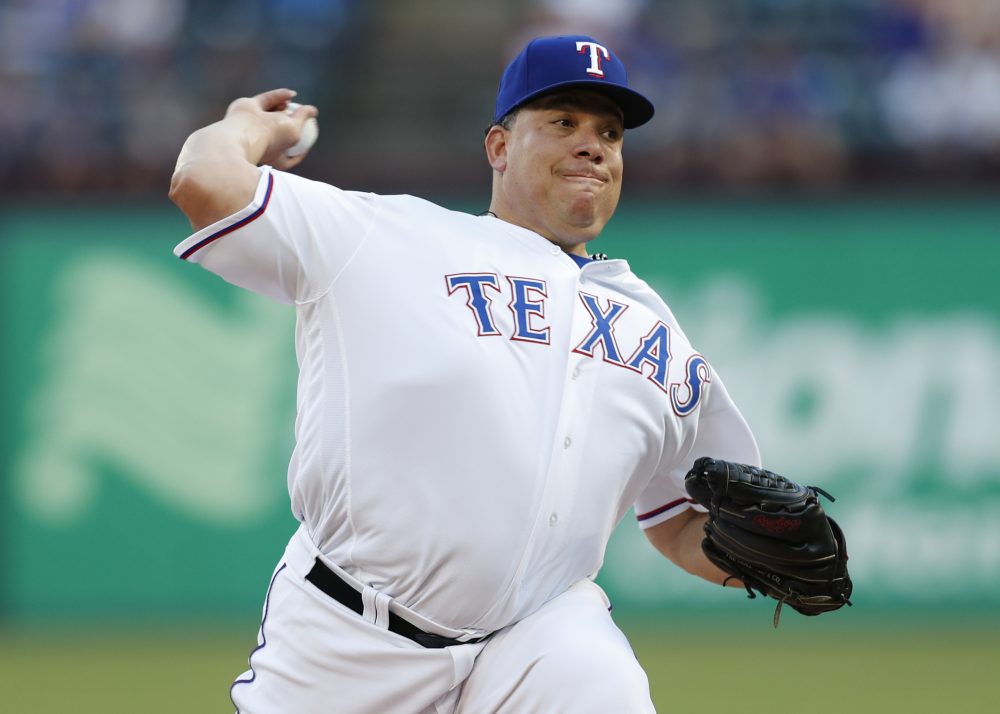 It’s come to my attention (nearly every week in the comments section) that compiling a list of two-start pitchers on the preceding Thursday (for Friday publication) is, at best, an inexact science. The advantage of having such a list on Friday is that it gives you time to plan roster moves well in advance of the customary Sunday waiver processing. But this advantage is lessened if you don’t have correct information.

So, for this and subsequent weeks, I’m erring on the side of excess. If a pitcher looks like he has even a small chance of two starts, I’ll include him on the list—with a note indicating that his team’s rotation is in flux. I still won’t get all of them right, but going forward I’ll try harder to #BeBest. This means that I will end up ranking more pitchers than possible two-start slots, but in doing so I aim to cover as many options as possible.

For more about the labels, click on Mark’s thorough descriptions here. And now, for your consideration…[curtain rises]…Week 8!

Cole is second only to Max Scherzer among starters on the DRA leaderboard, with a 1.46 (Scherz sitting pretty at 1.44). Enjoy your aces.

Bauer’s schedule is the only thing keeping him from auto-start status this week—he’s basically been pitching to his late-2017 level, which had his stock soaring in draft season. His walks (3.2 BB/9) could stand to be trimmed, and the Cubs and Astros are two teams that can parlay those walks into bigger innings. But he’s already reached the outskirts of Ace City.

I’m not sure I’m ready to declare Jose Berrios back on the level of his early-season mastery, but a gorgeous start against the Cards (7 1/3 IP, 2 H, 0 R, 1 BB, 10 K) goes a long way toward relieving my anxiety.

“Gausman” and “consistency” have seldom belonged in the same sentence, but the O’s righty has been a bankable asset lately: five of his last six outings have been quality starts (he was pulled one out short of a QS in the other). The four-seam velocity is working its way back to last year’s levels, and he has slightly increased his use of the split-finger and slider, which have a .224 and .257 xWOBA, respectively. Pretty, pretty good.

Tanaka has been frustrating from an ERA perspective (4.73, largely due to a 1.58 HR/9), but virtually everything else is working (8.24 K/9, 1.75 BB/9, 1.07 WHIP). The Rangers and Angels have long-ball capability, but Tanaka’s chances for wins are high enough to merit starting him against virtually any opponent.

The fantasy community took notice of Cahill’s 6 IP, 12 K start against Baltimore on May 5, but this was followed up with a less-awesome 5 IP, 3 ER, 1 K start against the Red Sox. Poor health over the last couple of years has masked his overall effectiveness, but Cahill has been a strikeout pitcher for the last two-plus years, and his K/9 currently sits at an excellent 9.93. Facing the Robbie-free Seattle and Pollock-less Arizona lineups tips him toward a “start.”

Happ bounced back from a rough one against Seattle to shut down the Mets on Wednesday (7 IP, 2 H, 0 ER, 0 BB, 10 K). He’s currently striking out 30.7% of batters, while walking only 6.1%, and his 24.7% K-minus-BB% ranks him seventh among starters. The schedule makes me neither happy (no pun intended) nor sad, but it certainly doesn’t keep me from starting him.

(I wrote this before I learned that Hamels was scratched with a neck injury on Thursday—so, it may all be for naught, but nonetheless…) What the heck has gotten into Cole Hamels? His K/9 has gone up from 6.39 in 2017 to 9.93 so far this year. But he’s giving up long balls at the rate of over 1.5 per nine innings. He’s become ever more reliant on his 86-88 mph cutter, which he controls well, but when it misses, it misses meatball-style. The 5.81 DRA is a red flag, but the Ks make him a probable starter for you. Anyway, at least he gets to face the Yankees in Arlington.

In my piece from Monday, I mentioned Colon as a sneaky-good play because of his ability to go deep into games. But we’re getting to the point where we should take the 44-year-old seriously as, you know, a good pitcher. Again. Still. The low-K, high-contact approach will get him blown up one of these days—the 5.61 DRA has to throw up some caution—but consider rubbing the rabbit’s foot for the Yankees just to get to that attractive Royals matchup. I’m starting Big Sexy in 12-team mixed and deeper.

Despite facing the Red Sox, who torched him at Fenway in April, Faria has two Tropicana starts, where he has much more favorable splits (1.74 ERA, .558 OPS). I would pitch him in 12-team mixed and deeper.

Currently sidelined by a right shoulder impingement, J-Zimm has an outside shot at starting two, but we’ll include him just to be on the safe side. Zimmermann has suddenly morphed into a strikeout pitcher, topping a K per inning for the first time in his career. He’s tossed 12 scoreless innings over his last two starts, so if healthy, he’s worth a deep-league look.

To his credit, Cashner has a run of three straight starts with exactly 3 ER in each—but I just can’t. Even with relatively favorable matchups, Cashner gives you little win upside, and at 1.97 HR/9, your chances of profiting from two starts are pretty thin.

Santiago seems to have crossed over that border from being a marginally useful fantasy pitcher to being something less than useful. Until he can bring the 5.29 BB/9 down to a less cringey level, he doesn’t really merit consideration.

Shields, Hammel and Leake all seem to be past their sell-by dates, and you shouldn’t feel compelled to pull them down from their dusty shelves. Carpenter may start in Zimmermann’s spot, but the 27-year-old non-prospect lefty rookie doesn’t have a lot to recommend him. While the White Sox are a favorable lefty matchup, I’d want to see some indicators of success before I considered a start, much less two.

Proof positive that you don’t have to be a bona-fide ace to get to auto-start territory. Gio has a friendly pair of matchups, and while he’s not spectacular, he has an extremely high floor. The walks are up—4.17 BB/9 is nobody’s idea of good—but the GB% has ticked above 50% for the first time in three years, and as a result the home runs are down—he won’t keep up the 0.36 HR/9, but long ball suppression is something Gio has always had in his skill set.

Buehler has looked pretty freaking dominant so far, as evidenced by his elite 11.3 K/9. The only caveat that keeps him from the top tier: the Dodgers have not yet let him pitch beyond six innings, so the win chances go down a tick. On the other hand, the Rockies and Padres at home offer some nice odds for going beyond that six-inning threshold next week.

Mikolas showed the potential weakness in his strike-throwing profile against Minnesota on Wednesday: the Twins got to him for seven hits in only 4 2/3 innings, but Mikolas still escaped with only 2 ER. These are nice matchups for one of the most efficient starters (in terms of pitches-per-inning) in the majors.

This season might not (yet) feel like a breakout for the 26-year-old Taillon, but his game is coming together nicely, which is reflected in his 3.21 DRA more than in his top-line stats at this point. I still feel good about Taillon’s floor, and these are two starts that shouldn’t strike fear.

In his last two starts (12 IP, 1 ER, 18/1 K/BB), Pivetta has bounced back to his early-season form, and then some. Then again, those starts were against the Giants and Orioles. The Braves and Blue Jays present a much greater challenge to the Phillies righty, but I’d be reasonably confident in 12-team mixed and deeper.

Assuming Chase Anderson is good to go after his bout of food poisoning, he should merit your consideration against two mid-tier opponents. The home starts haven’t been great (6.19 ERA), but he did manage a 2.51 ERA at Miller Park last year, so I wouldn’t be completely scared off. Consider him in 12-teamers and start him in 15-team and deeper.

Wheeler is here largely because of his Ks, which are slightly north of one-per-inning, and a DRA of 3.55 that hints at better days ahead. Home Miami: good. At Milwaukee: scary, but the Brewers have been sneaky-bad offensively. Consider him in 15-team and deeper, based on your needs and options.

I’ve begrudgingly upgraded Chacin to the “consider” tier, because he’s finding a way to survive in spite of diminished velocity and spotty control. His GB% is down a tick from last year, but at 43 percent, it’s still good enough to keep him viable in Miller Park. For this week, he’s a “break glass in emergency” streaming option in 15-team and deeper leagues.

German Marquez is good! I think this every time I watch the Rockies righty, and then he gets shelled for a five-run inning. The 3.67 DRA tells me I’m not crazy, but the 10.15 ERA in 15 2/3 IP at Coors Field tells me I might be if I consider starting him for his two-step at Chavez Ravine and home to the Reds. You can’t have road starts in San Diego and San Francisco every week, folks.

Your league may be deep enough, or your situation desperate enough, to consider whichever Marlins pitcher ends up getting the two-start week. Smith has been a strikeout force (12.03 K/9) but struggles to get to W territory for a bad team. If you’re lagging in this category, K-leb (Did I just make that up? Not bad!) is the streamer for you. Hernandez has a good first start under his belt (5 IP, 3 H, 1 ER, 3 K vs. the Dodgers) along with the lure of the unknown. If you’re in NL-only territory and he gets the double-start for the week, then…sure.

How do I have three Brewers pitchers on this list? Well, the Chase Anderson tummyache contingency plan could be Brandon Woodruff. His decent K potential and ground-ball tendencies have him as a super-deep consideration, but Miller Park is still hazardous to his, and your, ratios.

Like an off-brand Mikolas (wow, never anticipated using that phrase as a sorta compliment), Koch has gotten by on control and batted-ball luck. Until his last start, that is, when he got rocked by the Brewers for 8 ER and 4 HR in 4 1/3 innings. Going to Miller Park to face his tormentors again is, shall we say, not ideal. Give it a thought, but this is more of an NL-only play.

McCarthy had a nice start against the Cubs on Wednesday (6 IP, 5 H, 1 ER, 2 BB, 8 K) to back his owners off the ledge—but this is a tough duo for the increasingly hittable Braves righty/Twitter virtuoso. And, who knows, it could be Luiz Gohara in the rotation by the end of that Fenway series.

Harvey will possibly pique your interest based on narrative concerns—Decent velocity! New team! Fresh start!—but two four-inning non-disaster starts against weakish offenses shouldn’t get you that excited. Not to mention: Coors.

I just looked at Vargas’ stat line and let out an audible gasp. I know it’s only been three starts, but when your HR/9 looks like a league-average ERA, things are…not great.

You need to be logged in to comment. Login or Subscribe
Steven Rau
How about Hellickson? Looks like he should get the nod both 5/21 and 5/27... no?
Reply to Steven
Jon Hegglund
I've got Hellickson going on Tuesday--which would give him only one start. If he does go on Monday & Sunday, he'd be a strong consider. I don't really believe in the skills, but home Padres/road Marlins is a great slate.
Reply to Jon