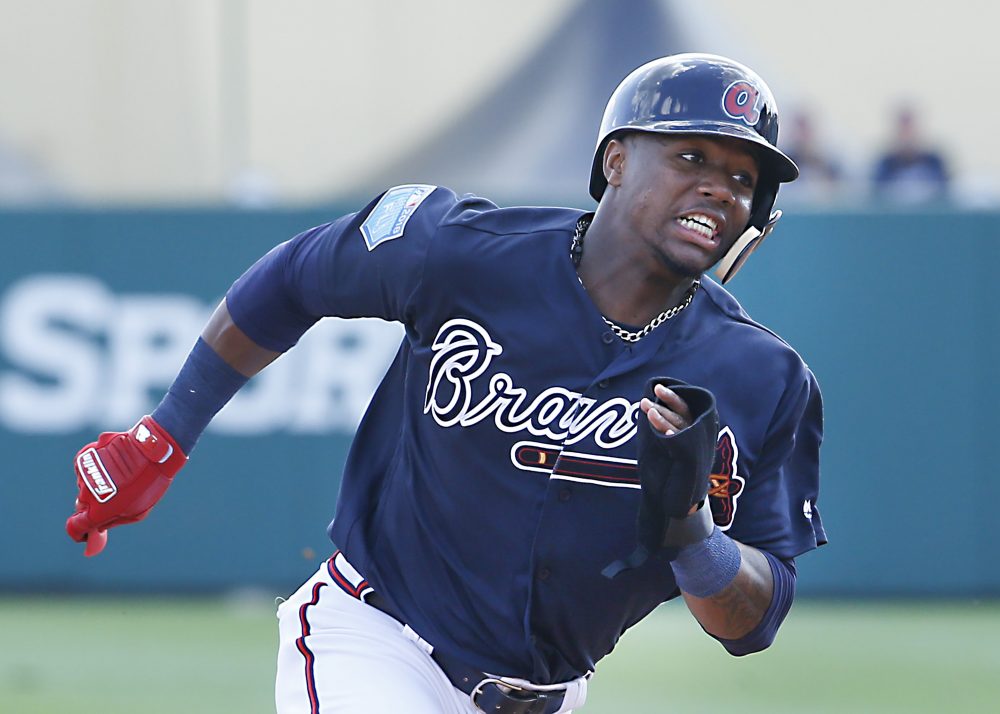 This past weekend, I was in Arizona to participate in the League of Alternative Baseball Reality (LABR) for my sixth year in the league and my second consecutive in-person, AL-only auction. I did not head into the weekend expecting to also compete on the NL side of the pool but was asked to fill in at the last second when Steve Moyer, who has been in LABR almost since its inception 25 years ago, unexpectedly passed away. Peter Kreutzer (Ask Rotoman) wrote a moving tribute that surpasses anything I could write about Steve, though I will say I don’t know you’d be reading any of my words here at Baseball Prospectus without Steve’s early encouragement and support. I will miss him.

I didn’t have much time to prepare for the NL auction, so I decided to use my published values from this past Friday with no league specific adjustments. I hadn’t studied the league tendencies, so this would be a straight value auction.

I have tried to eschew the round-by-round or player-by-player recap format, but since I have no commentary to offer about pre-auction strategy or bid adjustments, this format makes the most sense for this article. My raw bid is in parenthesis next to the player price.

The first few rounds of LABR weren’t exactly a free-for-all, but spending was slightly more aggressive than per usual in what is often a conservative league. I had the penultimate bid on a couple of expensive players but didn’t get anyone at $25 or over. I didn’t expect to get Acuna in any of my leagues but at $16, I’m OK with him if he’s up before June 1. I took Lane Adams on reserve as a hedge in case the Braves are conservative with Acuna’s timetable.

Davis is solid at this price, but LABR NL is typically conservative on closers and 2018 was no exception. Two teams dumped saves, and on the aggregate, closers were $24 cheaper than they were in the CBS NL-only auction.

I’m seemingly higher than everyone else is on Hand this year, so perhaps this bid is absurd. But I stand by the skills and believe he could be closer to Kenley Jansen than the rest of the pack when all is said and done.

5.8 Jake Arrieta $16 ($18)
I felt bad about this buy in the moment, and this is a case where I almost definitely would have pushed this bid down had I sat down to think it through during a dry run of my auction values. In retrospect, while I cannot deny it is a big gamble and a $3-4 overpay, nearly every Arrieta rumor has him linked to an NL team. Additionally, pitching prices in LABR NL were $67 higher than in 2017. I had to buy someone, and with non-closer prices a whopping $91 more than they were in 2017, the Arrieta price doesn’t look nearly as awful as it did without the power of hindsight and the context of the market (assuming he stays in the NL, of course).

An offense cannot survive by Acuna hype alone, so I purchased a pair of hitters in the sixth round. I left my comfort zone somewhat with Taylor. I’m skeptical the power and average will maintain but a full season of at-bats and 15-20 steals make Taylor acceptable at this price. I’m in my own room with Bour. Thirty home runs are realistic and if Bour does get traded, his runs and RBI will increase.

One mistake I made in 2017 was downgrading players far too much because of spring injury concerns, most notably missing out on Max Scherzer but also on a few others as well. Carpenter and Murph aren’t likely to be ready for Opening Day – and my prices above didn’t reflect this on Sunday – but there is enough value baked into both prices that each player could miss 45 games and still be profitable.

Laugh at my Scooter bid if you must. I believe the power is legitimate – he hit 20 home runs in 375 plate appearances after his four-home run game on June 6 – and he is being undervalued by skeptics who believe he is a complete fluke. Gio won’t repeat 2017 but there is far too much skepticism about a pitcher whose 3.35 DRA speaks to a legitimate performance spike.

I wonder if I should have avoided Conforto and taken a safer outfielder, particularly since I already had Acuna. Conforto was a great hitter pre-injury and can easily return this value. But he could also suffer a setback in rehab or return as scheduled but as a shadow of his former self. A gamble on either Acuna or Conforto is fine. A gamble on both at a combined $28 could be overkill.

Kurt Suzuki also went for $5. Flowers should get more at-bats and reps behind the plate, unless Suzuki inexplicably repeats his 2017 performance. Flowers earned $10 in 317 at-bats last year, and I expect his playing time to increase.

Barraclough could supplant Brad Ziegler as Miami’s closer, but all I need is a return to his 2016 form and 100+ strikeouts. Fowler has only played more than 125 games once since 2013 but at this price I don’t need a full season, just consistent production when he does play. Aaron Altherr ($11) cost more than Williams, which was partially a product of draft dynamics but puzzling nonetheless. Williams should get most of the at-bats as part of a quasi-Altherr/Williams platoon and at $8, I don’t need 162 games from Williams for him to turn a profit. I love buying post-hype prospects.

In both LABR auctions, I wanted to push for at least one super middle reliever. Hader struck out 119 batters in 99 2/3 innings between Triple-A and the majors last year. While I don’t expect the workload to be this intense if he is strictly a reliever, 80 high-end innings with that whiff rate will do nicely.

With the purchase of Williams, I could only bid on a catcher, shortstop and third baseman on offense. I pushed hard on a few third basemen before settling on Crawford. I buy into his swing adjustment/resurgence in the second half at Lehigh Valley but at $7 am mostly buying in on his defense carrying him to a full season of at-bats. Teheran’s ERA makes it appear he sucked last year but his DRA tells the story of an above average arm. I’m happy rostering a pitcher who has had a 3.8 WARP or higher three of the last four seasons at a single-digit price.

His bid price and the path of Nelson’s 2018 is pure guesswork. At $3, I like the gamble that he’ll easily surpass $3 in earnings even if he only pitches 80 innings.

Maybe I am overestimating him; he hasn’t cost more than a dollar in either CBS or LABR. But I believe Chacin’s gains last year are legitimate and he could be a $5-10 pitcher.

I was glad to get regular at-bats (hopefully) from my $1 catcher.

I made the uncharacteristic decision to go with a backup over one of the bottom tier starting shortstops floating around at the end. I needed the steals and even as a utility player, Reyes should get plenty of at-bats for the Mets.

Wait, I’m done? How did that happen?

There it is; the obligatory pre-season expert recap packing that tells you “I like my team”, which translates loosely into “I can auction well using my draft system.”

Although it isn’t just my bids that like this team. 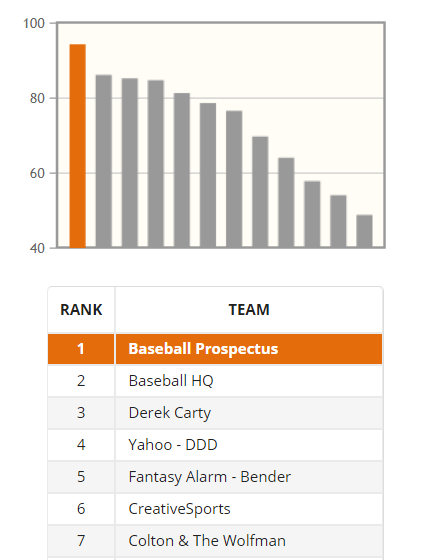 These are the projections at the RT Sports site that hosts the LABR leagues. You can and should take these projections with a grain of salt, but I do take slight comfort in seeing a projection system that isn’t mine with a favorable view of my team.

This makes sense. Constructing a balanced roster generally leads to favorable projections. The question will be whether or not some of the calculated risks I took (Acuna, Conforto, Arrieta, Nelson) lead to success or failure.

You need to be logged in to comment. Login or Subscribe
Eric Valdi
I really like the value on Acuna, Flowers (might bat cleanup), Williams, Conforto, Murphy, Crawford, Carpenter & Arrieta --- despite injury and playing time concerns, those are great prices for the talent.
Reply to Eric
Mike Gianella
It's much more of a risk/reward team than I typically assemble. Flowers, Crawford, and arguably Williams are pretty safe at those prices. The rest of them will likely make or break the team.
Reply to Mike