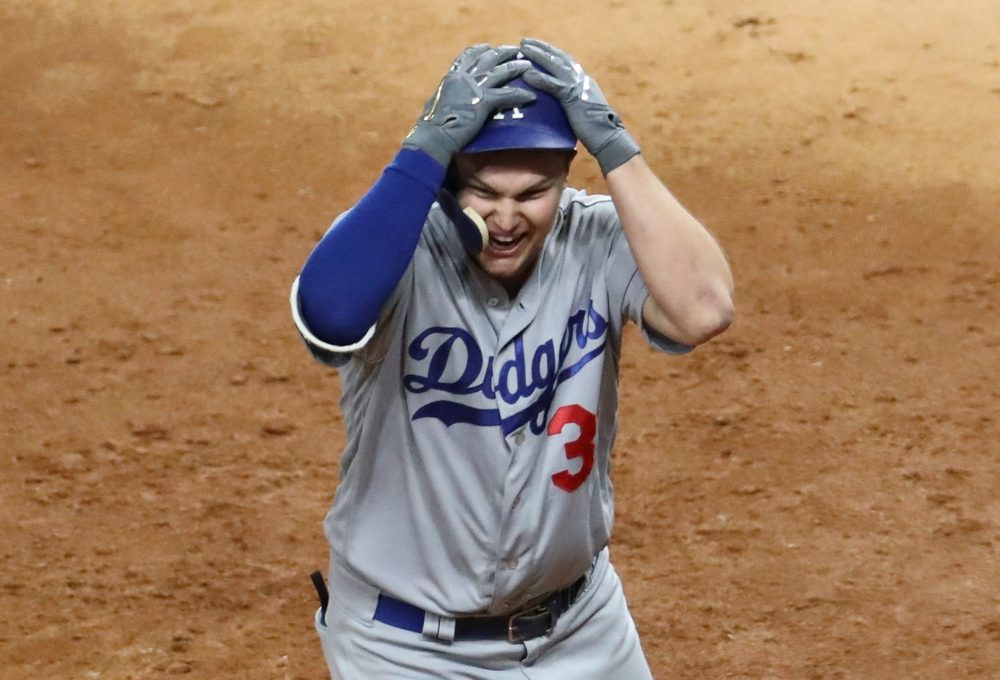 Joc Pederson’s three-year odyssey in which he unexpectedly transformed from of the most exciting power/speed combo prospects in the game, to a seemingly fully washed, strikeout-prone enigma, and a complete non-factor, is one of the more bizarre fantasy storylines of the past few seasons. Believe it or not, he’s still only 25 years old. An 11th-round pick by the Dodgers in the 2010 MLB Draft out of Palo Alto High School in California, it didn’t take Pederson long to establish himself as a prospect that flashed five-tool talent. Simply put, he looked every bit like a potential fantasy superstar by the time he made his major-league debut in the final month of the 2014 campaign. In the five months leading up to that point, he became the first player in 80 years to record a 30-homer, 30-steal season in the Triple-A Pacific Coast League. In 553 plate appearances, he hit an absurd .303/.435/.582 with 33 home runs and 30 stolen bases. Despite striking out in over a quarter of those trips to the dish, he also led the league in walks, with 100, that season. There’s no question that Pederson took advantage of the PCL’s extreme hitter-friendly environments, but the degree to which he dominated was almost unprecedented.

You like that?! Not bad, Joc. Seriously, he’s had a fantastic postseason so far. It’s the type of run that can fuel bounce-back articles for an entire offseason. Unfortunately, there aren’t a lot of positives to highlight from Pederson’s 2017 regular season and we must address his playing-time prospects moving forward before we can tackle any of his other issues. With top prospect Alex Verdugo knocking on the door; it’s completely fair to wonder what type of role the Dodgers envision for Pederson long-term. As country artist Kenny Chesney would (probably) say, he’s too old to still be considered a prospect, but he’s too young to be over the metaphorical hill (and cast aside completely). His massive struggles against left-handed pitching don’t appear to be going away anytime soon. In 2017, he was given only 55 plate appearances against southpaws and managed just a .204/.291/.306 slash line. For his career, he’s a .184/.278/.321 hitter over 268 plate appearances against lefties. If he’s merely a righty-mashing, platoon corner outfielder, that’s not a terrible real-life outcome for Los Angeles, it’s just not the fantasy superstar we all envisioned less than three years ago.

The omnipresent contact issues, fueled by his extremely aggressive approach at the plate and the complete disintegration of his once prodigious stolen base totals are the major bugaboo’s in his profile from a fantasy perspective. He’s an extreme liability in batting average and that is unlikely to change. With nearly 1,500 big-league plate appearances in the bank, Pederson is a career .222 hitter. The more important number that the Dodgers (or another front office) will focus on is his lifetime .345 on-base percentage, but it unfortunately doesn’t have any value in a traditional old-school fantasy format. While he struck out less (21 percent) in 2017 than his previous two seasons, Pederson’s performance cratered across the board as he hit just .212/.331/.407 with 11 home runs and just four steals over 323 plate appearances. According to ESPN’s player rater, Pederson finished as the 142nd-ranked outfielder this past season, behind Ehire Adrianza, Lane Adams, Gorkys Hernandez and the sentient remains of Carlos Beltran.

He struggled so badly in the second half that the Dodgers traded for veteran Curtis Granderson and demoted Pederson to Triple-A in mid-August. Setting aside Pederson’s long-term playing time concerns for a brief moment, the bigger issue with his profile is the impact of a rising league-wide home-run tide. It has a disproportionately negative effect (from a valuation standpoint) on a power-only, one-category profile like Pederson than a hitter who also contributes in stolen bases or batting average.

A major-league record 6,105 home runs were hit last season. This isn’t a new phenomenon either. It was one of the central themes we dissected in BP’s Fantasy Categorical Breakdown series last offseason. Here’s a quick refresher if you need one. You’re going to see the ensuing chart more than a few times this offseason, but it’s critical data that every fantasy owner should have imprinted in their minds going forward. Here is a look at the number of individual hitters that have eclipsed the 35, 20, and 10 home-run plateaus every year over the past 10 seasons.

The unofficial line of demarcation, where the home run surge appears to have begun, is the second-half of the 2015 campaign. It happens to coincide with the first season that Rob Manfred took over for Bud Selig as MLB Commissioner. We’re going to be exploring the research done by Ben Lindbergh, Rob Arthur, Mitchel Lichtman and others over the last year regarding the manufacturing changes to the major-league ball that appear to be the underlying cause of the league-wide uptick in our category breakdown series. The overall point that I want to illustrate here with Pederson is merely that if his realistic ceiling is that of a one-category contributor (20-30 homer outfielder), it’s just not as impactful fantasy-wise as it would’ve been even five years ago. With more than twice as many hitters breaking the 20-homer barrier as they did four years ago, it’s clear that the power landscape has shifted dramatically. Unless Pederson can make substantial improvements in batting average or steals, he needs to ascend into truly elite territory (30-plus home runs annually) from a power standpoint if he’s going to become a relevant fantasy option in the future.