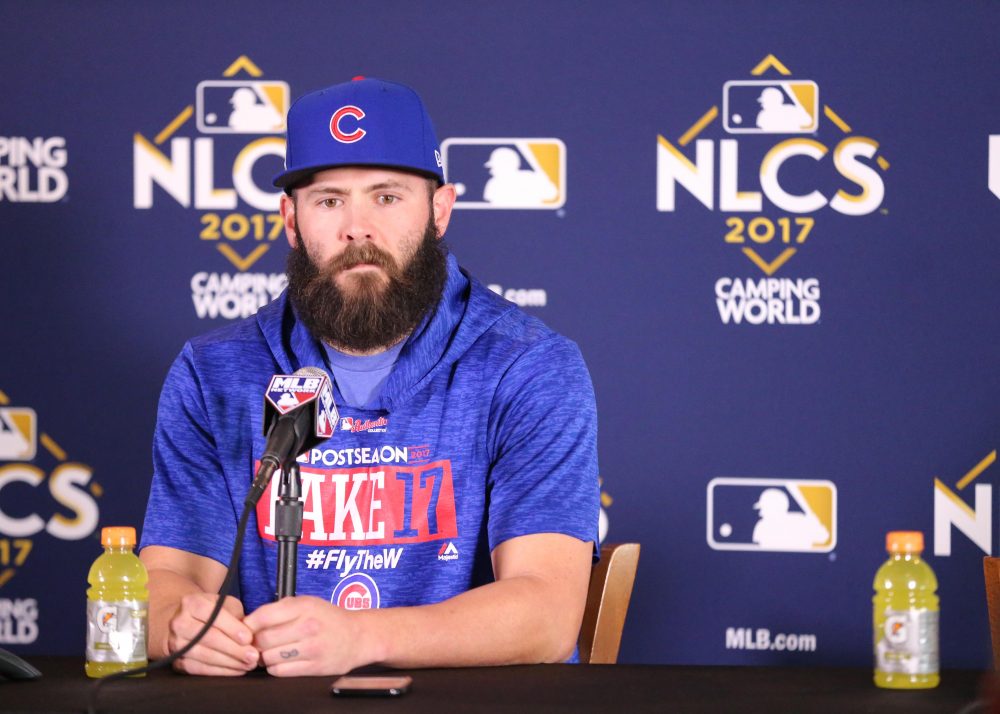 The Orioles snagged Jake Arrieta in the fifth round of the 2007 draft, making the former TCU Horned Frog the latest in the franchise’s attempts to land a frontline starter. After dominating at High-A Frederick, Arrieta found his way onto the BP Top 101 in 2009, checking in at number 52, one spot behind Brewers shortstop Alcides Escobar, and one ahead of Marlins first baseman Logan Morrison. Oh, 2009, it was a simpler time.

The righty would see his first big league action in 2010, making 58 unremarkable (read: bad) starts before sliding into a middle-relief role for the Birds in 2012. At the 2013 trade deadline, the Orioles sought to bolster their rotation, so they flipped Arrieta and Pedro Strop to the Cubs for Scott Feldman and Steve Clevenger. Seriously. For the Cubs, it would go down as a heist that would make Danny Ocean proud. For the O’s, Feldman tossed 90 2/3 innings down the stretch, striking out 65 batters with a 4.27 ERA. They missed the playoffs.

Once on the North Side, it didn’t take long for Arrieta to go from trade afterthought to frontline starter, a transformation Michael Bay wouldn’t hesitate to exploit and objectify. He tinkered with his pitch mix, throwing more sliders and sinkers, which led to a truly anemic homer run rate and a dramatic increase in whiffs. The new repertoire helped Arrieta become one of the best pitchers in baseball, culminating in a Cy Young Award in 2015. While he hasn’t repeated the heights of his award-winning campaign, Arrieta has fluctuated between good and great ever since, anchoring the Cubs’ World Series rotation.

Early in the 2017 season, Arrieta has a little trouble with the long ball. You know, just like pretty much everyone else in the league. The 31-year-old surrendered 14 dingers in the first half, compared to 10 and 16 home runs he’d given up in the entirety of the 2015 and 2016 seasons, respectively. In his first 11 starts, he struggled as hitters tattooed his sinker and slider, leading to a bloated 4.60 ERA in 62 2/3 innings. Despite his struggles, he was striking out over 10 batters per nine innings with a swinging-strike rate over 11 percent.

It’s at least conceivable that Arrieta’s early woes were mostly tied to bad luck. Batters were hitting .337 on balls in play against the Texan, and he was able to strand 67 percent of baserunners, a number well below league average. Having said that, Arrieta lost a couple ticks of velocity this season, which likely contributed to the lowest vertical movement on his sinker in his career. In 2015, Arrieta averaged 91 mph with his slider, the hardest in baseball, getting ground balls in over 54 percent of batted balls. This year the pitch averaged 88 mph (18th in the league), and managed only 29 percent ground balls, one of the lowest rates for any starter in the league.

When Arrieta is at his best, he’s leaning on heavily on his sinker and slider, two pitches that he had eschewed early in the season. After back pocketing his four-seam fastball sometime in June, Arrieta righted the ship, throwing 105 2/3 innings the rest of the way with a 2.90 ERA. The Bearded One seemingly made a conscious effort to pitch to contact with his two best pitches. Although his strikeout totals dipped by nearly three full strikeouts per nine innings, and his swinging-strike rate dropped three percentage points below league average, he held opponents to a line of .213/.280/.394 in the second half.

The extra sliders also helped Arrieta get his homer issue under control. While he had certainly enjoyed success using premium stuff to make hitters look silly, Arrieta’s dominance mostly stems from inducing ground balls. In July and August, over 72 percent of Arrieta’s pitches were either a sinker or slider and, not coincidentally, those were his two best months of the season (1.69 ERA in 69 1/3 innings), and while his 47 percent ground-ball rate in his final 19 starts wasn’t vintage Arrieta, it was definitely better than his early season output.

Much of Arrieta’s future fantasy value will be tied to his free-agent destination this offseason. While the old cliché has it that athletes magically perform better in a contract year, Arrieta’s uneven 2017, in addition to his age and injury history, could give some teams pause about inking the right-hander to a long-term deal. For the second consecutive year, Arrieta has seen his workload drop by around 30 innings, and he didn’t average six innings per start for the first time in a Cubs’ uniform. It’s entirely possible that the Cubs were closely monitoring their former ace in an attempt to keep him fresh for the postseason, but it’s equally possible that Arrieta just isn’t quite as dominant as he once was, and might not be able to rely on supreme stuff moving forward. Either way, I’m definitely not ready to say that Arrieta is entering the decline phase of his career; he’s still very good. Having said that, the one-time consensus top-five fantasy starter will probably slot closer to the top-20, or even 25, moving forward.