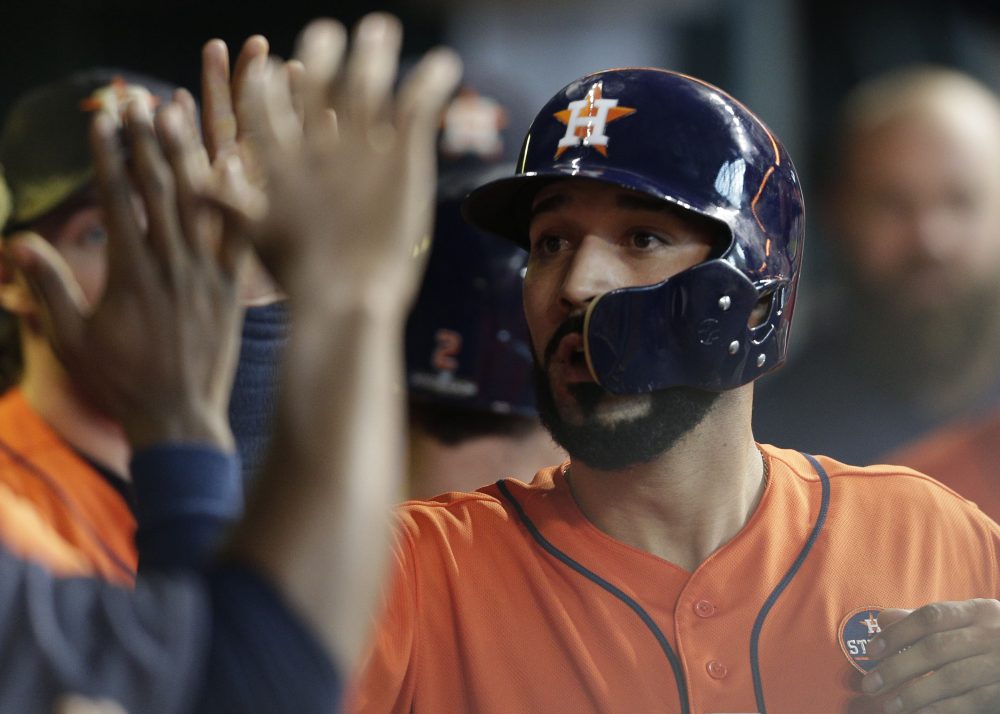 Originally signed by the Cubs as an amateur free agent in November 2005, the Venezuela native spent the next six seasons in their minor-league system. Despite finishing the 2011 campaign at Triple-A, Gonzalez was left off Chicago’s 40-man roster and exposed to the Rule 5 draft in the ensuing offseason. He was selected by the Red Sox and immediately dealt to the Astros for right-handed pitcher Marco Duarte, who lasted exactly one season in Boston’s system. In the meantime, Gonzalez blossomed into one of the most versatile defenders in the game, a veritable human Swiss Army Knife, over the past six seasons in Houston. After several years of rather pedestrian offensive production, he overhauled his approach at the plate and finally evolving into a fantasy factor in 2017.

The 28-year-old switch-hitter made a well-documented adjustment to his batting stance (from both sides of the plate) this season, opening up and lowering his hands. The “reverse Giancarlo Stanton” is perhaps the best way to describe it. As beat reporter Jake Kaplan of the Houston Chronicle reported back in early May:

“His (Gonzalez) swing mechanics are the same as they’ve been in the past. The biggest difference is his approach. He’s been vastly more selective in the pitches he’s swung at this season. He said he’s coming into every plate appearance with a specific plan and sticking to it no matter what, whereas in the past poor results might lead him to alter his plan mid at-bat.”

Armed with a revised approach that emphasized plate discipline, Gonzalez more than doubled his walk rate from a paltry 4.7 percent over the first 1,639 career plate appearances, to an impressive 9.5 percent in 2017. The newfound selectivity became the catalyst for incremental gains in other facets of his offensive game, most notably in the batting average and power departments. After a blazing-hot start in which he batted an absurd .308/.391/.576 with 16 home runs in just 258 plate appearances before the All-Star break, Gonzalez finished the season hitting a remarkable .303/.377/.530 with a career-high 23 home runs, 67 runs scored and 90 RBIs in 515 plate appearances. He also chipped in eight stolen bases, which might not sound like a big deal, but that extra speed provides more fantasy value than you think.

Per BP’s valuations wizard, Mike Gianella, Gonzalez produced $23 in value for his fantasy owners, finishing as the 22nd-best hitter in AL-only formats this season. Elvis Andrus, Francisco Lindor and Jean Segura were the only junior circuit shortstops to return more value in 2017. His shortstop eligibility, which he was able to retain once Carlos Correa missed a chunk of time due to injury, is going to drive his fantasy appeal going forward, but his versatility is a huge bonus for fantasy owners as well.

Dating back to his big-league debut in 2012, Gonzalez’s .738 OPS ranks fourth among major-league hitters who have played every infield position and a corner outfield spot over the past six seasons. Clearly, that list isn’t perfect, but it’s a fair representation of the most versatile defenders in the modern game. It’s also critical to remember that Gonzalez’s contributions across the defensive spectrum are not an elaborate Andrew Romine-style (extremely fun) publicity stunt either. He logged at least 130 innings at five positions—shortstop, second base, third base, first base, and left field—in 2017 alone. While BP’s defensive metrics aren’t crazy about him overall, he’s the type of asset that enables a manager to maximize his platoon options and plug holes in the lineup due to injury or ineffectiveness without sacrificing anything on either side of the ball. Here is the full list via Baseball-Reference: In the cold, dark abyss of the offseason there is always a writer suffering from cabin fever that sets out in search of “the next Ben Zobrist.” There will never be another Zobrist, but Gonzalez (and to a lesser extent Javy Baez) are the closest facsimiles cooked up by a pair of the most progressive and analytics savvy front offices in the Statcast Era.

There isn’t a lot to complain about with Gonzalez. It’s completely fair to question whether he will be able to repeat a .300-plus batting average going forward. He’s unlikely to sustain the grossly inflated .343 BABIP he rode this season, but he’s run BABIP’s in the .320-to-.330 range in smaller samples before. It certainly helps that he doesn’t strike out a ton (19.3% for his career), but expecting some regression in batting average isn’t unreasonable.

Barring a multi-year contract extension, Gonzalez is slated to hit free agency after the 2019 season. In the modern era, it’s become increasingly common for a power-hitting middle infielder with the versatility to shift around the diamond to garner a hefty deal on the open market. Despite the fact that he will be entering his age 31 season (and beyond), Gonzalez should have no trouble attracting a suitor in either league. From a fantasy standpoint, he’s in the perfect situation right now. Not only has his breakout campaign cemented his status as an everyday option for manager A.J. Hinch, but he’s one of the main reasons why the Astros high-powered offense led the majors, averaging 5.53 runs per-game last season.

The only lingering long-term question marks in his profile concern how much of his recent gains in the power and batting average departments are a legitimate harbinger of things to come, or merely a cruel mirage. We’ve discussed the slight batting average concerns already, so it’s worth noting that the 20-plus home run power is legitimate and fully supported by his batted ball profile. He won’t be cheap in mixed leagues next spring, but he’s a really solid high-floor investment.