When our colleague Mike Gianella updated the starting pitcher tiers in early June, Danny Salazar barely clung to the bottom in the three-star tier. At the time of the ranking, it’s quite possible it was even a couple spots too high. The flame-throwing righty was striking everyone out, sure, but he also was giving up almost two homers and five walks per nine innings and had a 5.40 ERA. Not great. Salazar was coming off the first of two bullpen appearances, a measure the Indians hoped would help him get things straightened out. After his second outing from the pen, he made another move, this time to the DL. The 27-year-old came off the DL on July 22 and has been HOT FLAME EMOJIS ever since. In 20 innings, Salazar has fanned 28 batters, walked only five, and has surrendered only eight hits en route to a 1.35 ERA. As Paul Hollywood might say while standing over a perfectly baked Genoese sponge cake with raspberry jam, “I like that.”

Let’s get this out of the way: It’s only been three starts. There are tons of guys who can look good, nay, unhittable for three consecutive starts. Having said that, it would appear that Salazar is taking steps on the proverbial journey from thrower to pitcher. Since coming back to the rotation, Salazar has significantly increased his fastball usage, at the expense of his vaunted changeup (a point Eno Sarris explained in greater detail in a recent FanGraphs piece). Leaning on the 96 mph heater has allowed him to throw more strikes (a novel concept), and his 49.2 percent zone rate is nearly three percentage points higher than his career average. He has also enjoyed more success getting ahead of batters, throwing a first-pitch strike nearly two-thirds of the time, a rate almost 10 percentage points higher than his previous career mark.

In addition to the fastball and changeup tweak, Salazar also is throwing more sliders. Heading into 2017, he hadn’t thrown the pitch more than 10 percent of the time since 2014, and had all but scrapped it from his arsenal. In his past three starts, the slider has reappeared, being thrown around 12 percent of the time, and getting whiffs in almost 17 percent of his offerings. In three short outings, the slider went from an afterthought to Salazar’s second-most whiffable (yes, I know this isn’t a word, but you get me) pitch.

Speaking of whiffs, Salazar has been inducing, um, all of them. In his most recent performance, a seven inning, 12-strikeout gem against the Yankees, Salazar got 17 swinging strikes. An outing against the White Sox in late July produced 22 (!) swinging strikes. All told, Salazar has a 17.6 percent swinging-strike rate in his past three starts, almost six percentage points higher than his 2017 tally before the DL stint.

Another change for Salazar has come from his release point. Earlier in the season it appeared as though he struggled finding consistency with his mechanics, likely leading to the aforementioned control issues: 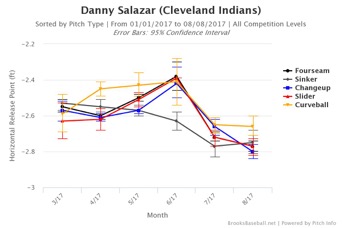 Since his return, his horizontal release point has remained more consistent and, in turn, Salazar has found greater success. Zooming out, the consistency in release point has closely compared to his 2015 season, with fewer spikes and drops. Not coincidentally, 2015 was Salazar’s most productive season as a big leaguer: 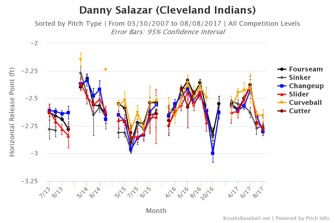 Before I get overly excited and anoint Salazar as the second coming of Steve Nebraska or something, let’s pull back the reins a bit. His sparkly 1.35 ERA in those three brilliant starts can be partially attributed to a .189 BABIP, along with an 86.2 percent strand rate and 6.7 percent HR/FB rate. Those marks are almost impossible to sustain and should trend closer to Salazar’s career levels, even factoring in the improved pitch mix and mechanics. That said, with Salazar’s prolific strikeout abilities, an ERA hovering around 3.00 and a 1.10-ish WHIP certainly would play and should be relatively attainable.

If this is the new Danny Salazar, we definitely need to re-evaluate his position as an elite hurler. Salazar has never eclipsed 185 innings in the big league, and has been inflicted with the “injury prone” tag, an issue unlikely to cease any time soon. Even without the heavy volume, the strikeouts and run prevention could place Salazar among the top-25 fantasy starters fairly easily. If Salazar continues this run, the price is going to be exorbitant, so now is the time to scoop him up in dynasty leagues.