Coming into 2017, fantasy owners felt like they had a good handle on Salvador Perez. He was a safe bet to make regular starts at the position who would give you something like a .250 batting average, 20 home runs, 50-60 runs, and 60-70 runs batted in. These totals landed him in the “three star” tier of Baseball Prospectus’ preseason catcher rankings. He was a player who was supplying increasing power at a cost to his batting average.

This type of production was good enough to make Perez a top-10 catcher for fantasy purposes in 2016. Owners were expecting more of the same this season. However, as the baseball calendar moves toward August, Perez has a legitimate claim as the most valuable catcher in fantasy baseball this season. He’s easily the top ranked catcher by ESPN’s Player Rater, and he’s giving owners positive value in every fantasy category (except for stolen bases).

So, what’s led to this kind of production for Perez? His power numbers have increased each season. He’s just two long balls away from tying his career high of 22. Barring injury, he’s a lock to set career highs in R and RBI as well. Not only that, but his counting stats haven’t come at the expense of his average this season. He’s currently batting .284 which would be his highest average since 2013. Salvador Perez is giving owners more value than they could have hoped for across the board this season.

What’s led to this surge from Perez? Is this a one-year fluke, or should owners look at Perez as a hitter who’s taken a step forward? Let’s dive into Perez’s numbers to find an explanation.

The biggest question mark owners had regarding Perez was his average. If his .284 average holds, it significantly changes Perez’s future fantasy value. An elevated BABIP isn’t the obvious culprit here. Yes, a .300 BABIP is out of character for Perez the past few seasons, but his career mark is .292. This isn’t an outrageous number, and there is more to the story than “luck.”

Perez isn’t hitting for a higher average because he’s been a more patient hitter. He has dropped his strikeout rate a bit (19.3 percent), but he’s swinging the bat more than ever. In 2017, Perez is swinging at more pitches out of the zone (47.8 percent) and more pitches in the zone (58.5 percent) than at any point in his career. Meanwhile, his contact rate has held steady at 80 percent. Perez’s swinging strike rate is identical to last season (11.5 percent). He might be swinging the bat more, but he’s not swinging and missing any more than usual.

However, there are a few changes worth noting in Perez’s profile. He’s dropped his ground-ball rate to a career low 29.5 percent. This is the second straight year that rate has decreased as Perez (and everyone else in baseball) tries to put the ball into the air more often. Not only is Perez hitting the ball in the air more, but he’s pulling the ball at a career-high rate as well (55.2 percent). Couple these stats with an increased hard-hit rate and it’s not hard to explain why he’ll set a career high in homers this year. Jeff Sullivan of FanGraphs noted some of these developments earlier in the season, and he looked at some changes to Perez’s batting stance that are helping here.

It’s interesting to note that even though Perez is pulling more pitches this season, he’s doing that while swinging at more pitches on the outer part of the plate. A comparison of his career swing rates with his swing rates from this season bear this out. First, through 2016: 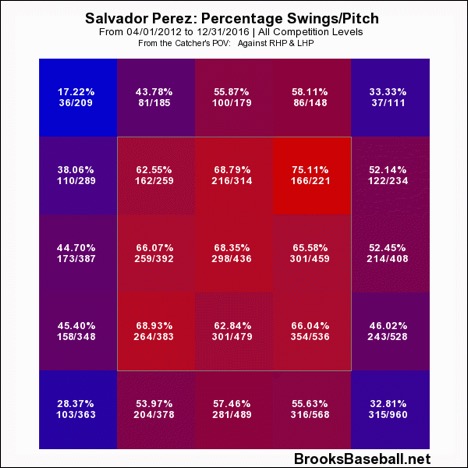 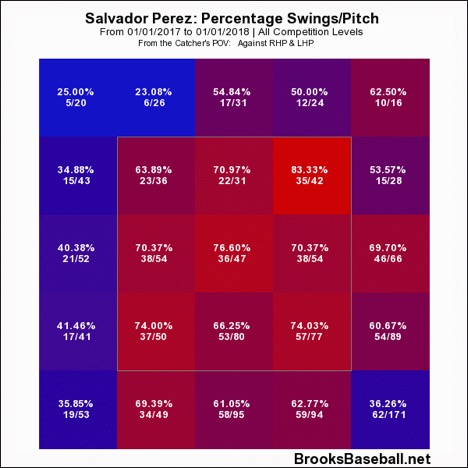 There’s one other noticeable factor to consider here. Perez is experiencing much better results against changeups than he has throughout his career. Prior to 2017, Perez hit just .231 against the pitch. This season, he’s hitting .383 and slugging .553. This has come even as his average has dropped against fastballs, curveballs and sliders. Perez’s increased ability to handle changeups has been one of the most significant factors to his increased batting average.

These factors taken together paint a pretty positive picture of Perez’s fantasy trajectory. There aren’t many “luck” factors that have been involved in Perez’s success at the plate. There have been some obvious changes to his approach, and they help explain why he’s seeing these results. Owners will want to see what happens as the league adjusts to Perez, but heading into next season it’s not difficult to see him as a top 3-5 player at his position