Webster’s dictionary defines “utility” as… just kidding. The positional flexibility craze in baseball didn’t start with Ben Zobrist, but his ability to play several positions at a high level certainly brought more attention to the modern utility player. Every year fantasy rosters are crippled with injuries. It’s terrible and awful and frustrating. It’s also inevitable. Having a super utility player stashed away on the roster is the ultimate luxury, and can help bail you out of such pickles, Benny “The Jet” style. This season, a handful of players have embraced the task of playing multiple positions and have thoroughly excelled in the process.

Before this season, the terms “serviceable” and “replacement level” easily could have been interchangeable with “Marwin,” as Gonzalez spent the first five seasons of his career hitting .257/.298/.389 in nearly 1,700 plate appearances. The 28-year-old could hit, but was allergic to drawing walks (career 4.7 percent walk rate), making it suboptimal for the Astros to make him an everyday fixture in their lineup. It would appear as though the Astros assigned a little winter reading for Gonzalez, and after finishing the Harry Potter series (for no reason in particular, they’re just super fun), I assume he dove into some light statistical analysis of the Bill James variety. This is all a long winded way to say he learned that patience, for lack of a better word, is good.

This season has brought a drastic shift in approach for Gonzalez, as he is swinging far less than he previously had in his career. In 2016, the former Rule 5 pick swung at around 48 percent of the pitches he saw. In 2015 that number peaked at 50 percent. This year, Gonzalez has slashed his swing rate to 41.2 percent, a number over five percentage points below league average. Not only has he showed better patience by not chasing pitches off of the plate, the switch hitter also has been more disciplined on pitches inside the zone.

Before this season, Gonzalez was at the plate to take hacks, not discriminating based on zone location. The result was a better-than-league-average zone-contact rate, but the results didn’t necessarily bear fruit on his numbers, as evidenced by his career slash line. 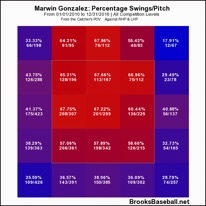 This season, Gonzalez is still mainly confining his swing to pitches in the zone, but he’s also swinging much less frequently at the low strike, opting instead to take bigger hacks at pitches that he has a better chance to drive. 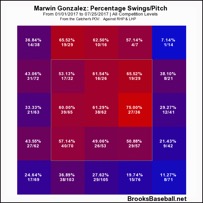 The result has been a godsend for the Astros, and in turn, for Gonzalez’s career. The added pickiness has led to a line of .318/.399/.586 with a 10.7 percent walk rate (for you math people, that’s more than double his previous career mark) and 18 dingers in 300 plate appearances. If wOBA is your thing, Gonzalez ranks sixth in the league at .413, and is part of the same conversation with names like Judge, Harper, Turner, Altuve, Rendon and Votto. Not bad company.

Perhaps most importantly for our purposes, injuries have thrust Gonzalez into playing relatively every day, and he qualifies at every non-catcher position. With his 2017 production, he’s probably in your lineup already, but if not, he’s an invaluable depth piece to float around to wherever he’s needed. Currently Gonzalez is a top 10 option at each infield spot according to the ESPN Player Rater, and he checks in at number 18 amongst outfielders. Even with some regression to his .353 BABIP and 24.7 percent HR/FB rate baked in, Gonzalez should still be a top 15ish option at several infield positions moving forward, making him an extremely enticing option.

With equal parts awe and disbelief, we all marveled at Gennett’s four-homer performance on that fateful June night. Even outside of that superhuman feat, the 27-year-old has maintained a strong line this season, hitting .313/.362/.602 (lol) with 18 homers in 265 plate appearances. The production has even led him to usurp the Reds’ starter at the keystone, Jose Peraza, leading to more consistent PT.

Like Gonzalez, Gennett has always had a knack for putting the ball in play, albeit sometimes at the expense of drawing walks. That really hasn’t changed this season for Gennett, as he’s still walking only 6 percent of the time, a number comfortably below league average. While the added pop is nice, it isn’t really the result of a big change in his batted-ball profile. Gennett is hitting fly balls a little over 36.6 percent of the time, a number merely 2 percentage points higher than last season’s mark. He’s hitting it a little harder this season, adding around three ticks to his average exit velocity (92.7 mph in 2017, slightly above average). He’s also pulling the ball more, which has helped as the vast majority of his round-trippers have sailed over the right-field wall.

The problem, however, is that it’s hard to determine whether a few more pulled fly balls are really the driving force behind Gennett’s uptick in production, or whether it can be chalked up to a .349 BABIP (over 20 percentage points higher than his career average), a 26.5 percent HR/FB rate (over double any previous career high), and juiced baseballs, um, random variance or something. The Reds will likely give Peraza another run at some point, and if Dilson Herrera’s shoulder ever gets re-attached to his body, he’s probably in line for some reps as well. Having said that, Gennett has showed enough defensively (he’s not great anywhere, but he hasn’t been a black hole) where his bat can stay in the lineup, making him a useful depth piece for fantasy rosters.

The day was June 19, 2016. The blockbuster to end all blockbusters. The Mariners acquired Zach Lee from the Dodgers, sending infielder Chris Taylor back in return. At the time, it was easy to predict that the Dodgers had just traded for their second-most valuable position player for the 2017 season (tied with Corey Seager). Wait, what?

Before tackling Taylor’s emergence, I reached out to the BP fantasy team’s foremost Taylor enthusiast, George Bissell for his thoughts. Rather than paraphrasing, I figured it would be easier to just read it straight from the source. Why waste more time with the opening act when the headliner is ready? Take it away, George.

The 26-year-old’s ongoing metamorphosis into an elite five-category fantasy contributor is one of the most unexpected developments of the 2017 season, especially considering he was the Dodgers final cut of spring training back on March 31. In 318 plate appearances since being recalled in mid-April, he’s hitting .318/.387/.538 with 36 extra-base hits (12 home runs), 52 runs scored, 44 RBIs and 12 stolen bases in 15 attempts. Not only has he seamlessly transitioned to left field (a position he had never played before) after a brief stint in center field, but his .392 wOBA ranks 19th out of 170 major-league hitters qualified for a batting title. That’s just one point behind his Dodger teammate, rookie sensation Cody Bellinger, and the reigning NL MVP, Kris Bryant.

From a fantasy standpoint, the Virginia natives’ speed and versatility are his most valuable attributes. He’s one of just 20 “dual-threat“ fantasy contributors to record double-digit home runs and stolen bases this season. Here’s the full list:

First, I mean, what a list. Seriously, there are multiple first-round caliber talents on it. Yet, only Trout, Pham, and (the other) Taylor have accomplished the feat in fewer plate appearances this season. After a hitting a rough patch at the plate in June, Taylor has rebounded nicely, hitting .525 (21-for-40) with eight extra base hits since the All-Star break.

I'm wrong A LOT. I don't think I'm wrong on Chris Taylor. I think he's going to be really good for a long time.

My personal affinity for Taylor is well-documented on Twitter. However, I have to acknowledge the glaring concerns in his profile, most notably that he’s struck out in 27 percent of his plate appearances this season. It’s a problem he needs to address eventually and it poses the biggest threat to his future value. However, as Jeff Sullivan noted on FanGraphs last month, Taylor doesn’t expand the zone and chase bad pitches very often. There are reasons to believe he can correct or at least mitigate his contact issues moving forward* .

That leaves us to deal with his insane luck on batted balls this season. Nobody sustains a .422 BABIP for any extended period. It’s just not possible. If we bake in some modest batted-ball luck regression into our long-term forecast, there’s a strong possibility that Taylor doesn’t make enough contact (and get lucky enough on the balls he does put in play) to come remotely close to replicating his present batting average.

Even if the potential contact issues and inevitable BABIP regression sap his overall value in the future, he’s still going to be a valuable fantasy contributor. It’s completely fair to be skeptical of the surface statistics he’s produced so far, so let’s put Taylor’s performance in context. According to Baseball Savant’s “expected wOBA” metric, Taylor’s .332 xwOBA is roughly equal to that of Mookie Betts, Jedd Gyorko, Yasiel Puig and Brian Dozier. Finally, it’s important to remember that Taylor has never recorded more than 151 single-season plate appearances at the major-league level prior to this season. He’s just getting started and there is still time to invest. —George Bissell

You need to be logged in to comment. Login or Subscribe
Carosella
"First, I mean, what a list."
Please don't ever use "I mean" in a sentence. It's complete filler, adds nothing and distracts from an otherwise insightful article. It's bad enough I have to hear it all day long, but to actually read it...Ugh! Take it out and your sentence says exactly the same thing.
Reply to Carosella
Punchoutpappy
Yeah, Mark Barry. I mean who in there write mind wouldn't use good English on a fantasy article meant for big consumption?
Reply to Punchoutpappy
GeorgeBissell
First, I mean, I wrote it. It was completely intentional. I regret nothing.
Reply to GeorgeBissell
kvamlnk
http://www.baseballprospectus.com/fantasy/dc/index.php?tm=LAN

The BP projected playing time gives Chris Taylor only 74 PA for the rest of the season. Do you get to provide any input on that number?

I realize it's a tough number to guess given Taylor's role, but it seems like he deserves more playing time.
Reply to kvamlnk
markusbaa
Yeah that definitely seems low to me. I can't imagine a non-injury scenario that keeps him out of the lineup that much.
Reply to markusbaa
slonny22
Wondering if there is a projected trade coming at the deadline, thus limiting his path to regular paying time in the second half?
(if I were the LAD I would run him out there every single day)
Reply to slonny22
markusbaa
I'm with you. I don't realistically know who they can get that would move him out of his spot. There were J.D. Martinez rumblings, but obviously that ship has sailed. I would guess they're just looking at pitching now.
Reply to markusbaa