Over the course of his nine-year career, Gerardo Parra hasn’t really been a hot commodity for fantasy purposes. He was unable to provide at least league-average production in six of his eight previous seasons. Before this year, there were questions whether Parra would be able to find regular playing time given the shape of Colorado’s roster.

However, Parra has been on fire as of late. He’s hitting .358/.381/.540 as of Sunday. All of those rates would easily be career highs if the season ended today. He could set a career high in home runs, and it’s likely he’ll eclipse his career high in RBIs. Those numbers are good, but it’s what Parra has been doing recently that has caught the attention of fantasy owners.

Since the All-Star break, Parra is hitting .538/.533/.808 with two home runs. He’s been one of the hottest hitters in baseball over the past two weeks, and this has raised his profile in the fantasy community. This past week at ESPN, Parra saw the biggest change in ownership rate jumping from 8.7 percent to 40.9 percent. Parra experienced the fourth-biggest change in ownership rate in CBS leagues (20 percent to 39 percent). The 30-year-old was the fourth-most added outfielder at Yahoo, and he’s currently owned in 38 percent of leagues at the site.

If you’re reading this, there’s still a decent chance you can acquire Parra. Is it time to invest in the Rockies outfielder? We’ll try and answer that question in this week’s Buyer’s Guide.

There are a few stats that help explain Parra’s increased production. He’s cut his strikeout rate to a career-low 14.9 percent. The most obvious reason for this is that he’s chasing far fewer pitches. Parra is swinging outside of the zone (32.8 percent) at the lowest rate since his rookie season. He’s also swinging in the zone much less than previous seasons (65.9 percent). Parra has the look of a more selective hitter, and it’s showing up in his production.

Those aren’t the only changes worth noting in Parra’s profile. He’s going the other way at a career-high rate as well. His willingness to use the opposite field has increased every month. In fact, this could be the first season where Parra goes the other way more than pulling the ball. 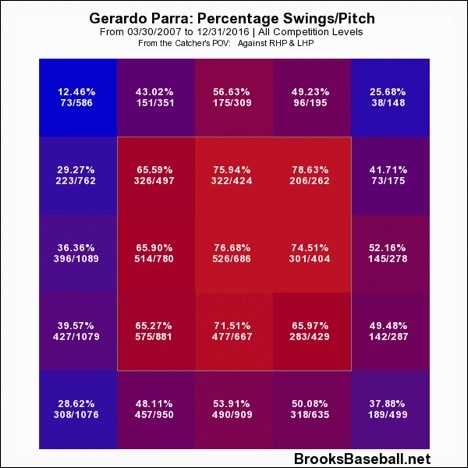 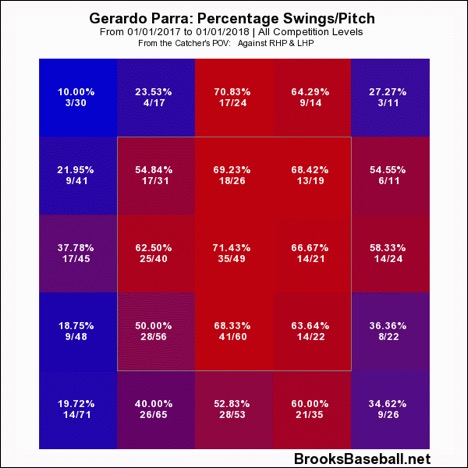 On pitches up and in, Parra is more likely to swing this season. He’s having a lot of success in three of those four areas. Some of the highest batting averages in his zone profile come from those locations.

There are a few obvious red flags with Parra. The first, and most important, are the injuries he’s dealt with this season. Parra missed about a month with a right quad strain. He returned to action July 7. However, Parra missed a few games over the weekend thanks to a bruised right calf. According to Daniel Kramer, Bud Black insists this latest issue won’t send Parrra to the disabled list. To be fair, this most recent injury was the result of being hit by a ball on a pickoff attempt. Still, this isn’t going to help Parra as he tries to keep his legs healthy.

Also, any time a player is as hot as Parra has been, you can suspect an unsustainable BABIP (.383). To be fair, Parras has always run a higher BABIP than average, but this is out of character even for him. It’s also unlikely his batting average is going to stay north of .350, but he should continue to hit at or above his career mark of .278. Parra’s struggles in this category a season ago were unexpected, and owners can be confident he’ll provide more value this year.

The other concern owners might have with Parra is that he’s stopped stealing bases. He’s attempted four steals, but he’s yet to be successful. He’s also battling leg issues and it’s unlikely he’ll supply anything in that category.

If you’ve owned Parra over the past few weeks, then you’ve undoubtedly been thrilled with the production you’ve received. However, the question for owners reading this is whether they trust Parra to be successful from this point moving forward. If you consider Parra’s prospects in fantasy terms, it’s difficult to come to a firm conclusion.

Over the past 15 games, Parra has been a top-five outfielder by ESPN’s Player Rater. His biggest contribution has been his batting average, which will come down in the coming months. Outside of that, he’s given owners solid RBI and R totals. If the Rockies keep him toward the top of the order those results could continue. However, they naturally will decline once Parra stops reaching base so often. He doesn’t have a strong walk rate to fall back on, so once the average goes the opportunities will decrease as well.

In terms of home runs and stolen bases, Parra isn’t giving owners much. He might crack 20 home runs which isn’t that big of an accomplishment, and it’s possible he’ll go the entire season without stealing a base. The fact that so much of his value depends on balls falling in play makes me skeptical of his future value. If you’re able, now is the time to try and get what you can for Parra.

You need to be logged in to comment. Login or Subscribe
jfranco77
Curious how you see the Reynolds/Parra/Desmond/CarGo/Dahl/Tapia mess working out the rest of the year. Obviously if Parra keeps hitting .500 then even Desmond or CarGo can be benched, but when he cools off, how much does he play?
Reply to jfranco77
Ericocc
That's a great question, and it's one of my biggest concerns with Parra moving forward. More than the others I think his playing time is production dependent. Once he cools off, my guess is he loses significant playing time.
Reply to Ericocc