Orlando Arcia made his major-league debut in 2016. Initially, his fantasy value was thought to be limited because his defense was his most valuable asset. Over the course of those 55 games, Arcia hit .219/.273/.358 with four home runs, 21 runs scored, 17 RBIs and eight stolen bases. His fantasy stock wasn’t high coming into 2017. Arcia did rate as a two-star player in Mike Gianella’s initial shortstop rankings, but Mike admitted this was “a speculative pick based on stats from a year ago.”

Owners might have been willing to roll the dice on Arcia because he had the potential to provide a nice stolen base total. Outside of that, there wasn’t much to get too excited about. This proved to be true early in the year. Through the end of May, he hit .251/.293/.368. This was better than a season ago, but it was still far from making Arcia fantasy relevant.

However, when the calendar turned to June, he became a different hitter. Since then, he’s hitting .336/.374/.500, which has increased Arcia’s profile in the fantasy community; owners began seriously buying in over the past week.

Arcia had the third-biggest change in ownership rate (20.3 percent) in ESPN leagues this week. Over at CBS, he had the greatest increase in ownership, going from 31 percent to 50 percent. He was a top-10 add at shortstop in Yahoo leagues, where he’s rostered at 33 percent.

So, what’s caused this sudden surge from Arcia? Is it possible he’s turned a corner as a hitter, or are there reasons to expect his numbers to come crashing down? We’ll try and answer those questions in this week’s Buyer’s Guide.

There are a few noticeable differences between Arcia’s approach in 2016 and 2017. His strikeout rate is down to 18.2 percent (from 21.8 percent). If you look at his monthly totals, you find that he dropped that number to 13 percent in May. Not surprisingly, he’s also dropped his first-strike rate and swinging-strike rate.

This increased discipline has shown up in other areas. His overall contact rate is up slightly, but it has significantly increased on swings inside of the zone (77.6 percent to 86.5 percent). Arcia is swinging at more hittable pitches and making more contact. That sounds like a good recipe for a better season at the plate.

One of the biggest changes for Arcia has been his ability to hit major-league fastballs. The following chart compares his results against the pitch from 2016 and 2017. This has been a major factor in his increased production this season.

As mentioned above, Arcia is making more contact in the zone this season. That’s especially true of balls down in the zone. Here's Arcia’s zone-profile batting averages from 2016: 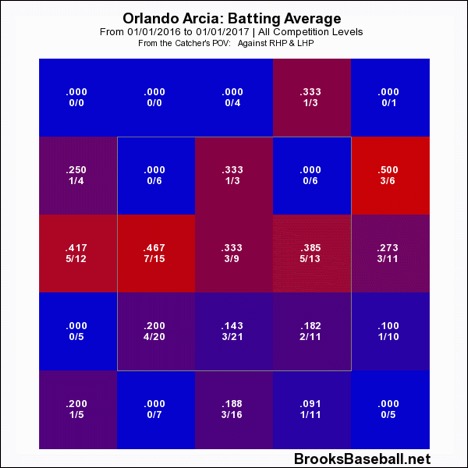 And his zone-profile batting averages from 2017: 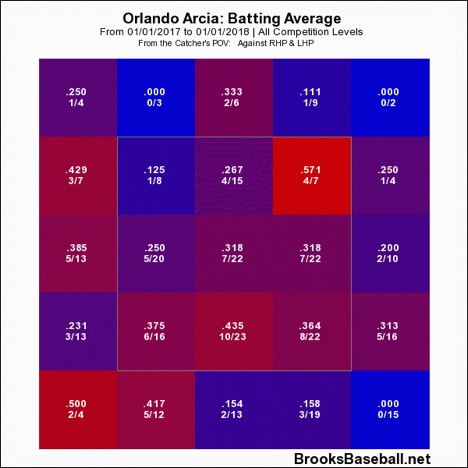 Arcia has been red-hot lately, but there are a few reasons fantasy owners should be cautious. One obvious reason is his BABIP. It currently sits at .332 for the season. This isn’t an outrageous rate given his track record, and his speed should help him run an elevated BABIP. Admittedly, it was .406 in June which is, as they say, unsustainable.

Another issue is that Arcia has been less successful stealing bases than he was a season ago. Last year, he swiped eight bags in 55 games. This season, he’s only racked up five steals in 85 games. Arcia has been caught stealing four times, which might have made him more cautious on the base paths. Owners who were hoping for closer to 20-30 steals from Arcia likely will have to settle for a lower total.

There’s also the issue of Arcia’s spot in the lineup. He’s been hitting eighth for much of the season, which limits his ability to contribute in several fantasy categories. The batting average is nice and he might chip in a few steals, but beyond that his value is limited.

No doubt, Arcia owners have been riding high over the past month. He’s been the sixth-most valuable shortstop over the past 30 days by ESPN’s Player Rater. That value has largely been driven by his batting average, with some steals thrown in for good measure. The question with Arcia seems to be this: Do you expect him to continue to hit for a high average? If so, he has value. If not, he’s not a good investment.

Given his track record, Arcia is likely to hit something closer to .260 over the rest of the season. That’s an improvement from a year ago, but it’s not high enough to make him worth rostering in a 12-team league. In a 15-team league, you might not have a better option. Now is the time to see if you can acquire value for Arcia via a trade. If you’ve benefited from his production over the past month, you’ve likely received the most value he’ll return this season.

You need to be logged in to comment. Login or Subscribe
dylanrox
In a 14 teamer (points format) I decided to drop him for DeJong hoping the power is real and the plate discipline shows some improvement. Given Arcia's reduced success on the bases, do you think DeJong has the higher ceiling at SS for the next 10 weeks?
Reply to dylanrox
gandriole
DeJong has a lot of playing time questions over the next ten weeks barring an injury or trade. I wouldn't have made that move.
Reply to gandriole
djswinger
I just did the *exact* same thing, so here's one vote. If PDJ hits, they'll find a place for him, so I'm gambling that he'll continue to hit.
Reply to djswinger
aklang
Now I see why he is getting dropped in so many yahoo leagues...
Reply to aklang