Travis Shaw wasn’t considered a hot fantasy commodity prior to this season. He was coming off a disappointing 2016, and owners weren’t quite sure what to expect following his move to Milwaukee. Shaw didn’t appear on Baseball Prospectus’ preseason tiered rankings, and he barely snuck in “The Top 300 for 2017.” However, as we approach the All-Star break, Shaw has been one of the most valuable fantasy assets at his position.

According to ESPN’s Player Rater, Shaw has been the second-most valuable third baseman, trailing only Jose Ramirez. He’s providing owners with positive value in every standard category. Surprisingly, that includes stolen bases. He’s already swiped a career high seven bags. When BP released its updated rankings, Shaw was bumped to a three-star option.

Clearly, if you invested in Shaw, you’ve been thrilled with the value he’s provided. What exactly has led to this level of production, and are there reasons to believe Shaw can keep it up? Finally, what are his fantasy prospects regarding future seasons?

As of Tuesday night, Shaw was hitting .294/.361/.556 with 17 HR, 44 R, 60 RBI and 7 SB. He’s in the top-10 at his position by every fantasy relevant counting stat. His RBI total has been one of the most valuable aspects of his game. He’s getting the opportunity to hit cleanup for the team that’s scored the eighth-most runs in the league. If he holds that spot in the order, and there’s no reason to think he won’t, he should have plenty more opportunities to add to that total.

Shaw’s batting average of .294 is considerably higher than his .263 career mark. It’s being aided by a .325 BABIP, but that’s not an outrageous rate. His strikeout rate has been cut to 20.3 percent. As of now, his contact rate is at a career-high 81.9 percent. Not only is he hitting the ball more often, but he’s limiting his swings out of the zone. Shaw’s first-strike rate and swinging-strike rate are down as well. These factors taken together paint the picture of a hitter who’s become more patient at the plate.

It’s interesting to note that Shaw is seeing his best power numbers even as his fly-ball rate has decreased to a career low. It currently stands at 34.6 percent which is well below his career average of 41.2 percent. To be fair, he hit the ball in the air 45.5 percent of the time in June, which also was his highest monthly homer total (eight). For all the talk of hitters intentionally putting the ball in the air, Shaw has done the opposite for long stretches of the season. This might make owners skittish about his power numbers moving forward. However, it should be remembered that he is in a great home ballpark for left-handed power.

A look at Shaw’s zone profile suggests that a good portion of his power output has come from his ability to drive pitches in two locations that he wasn’t able to in 2016. Shaw has put together quality production swinging at balls inside. He’s also increased his ability to drive pitches up in the zone. The following charts contrast Shaw’s zone profile by slugging percentage. 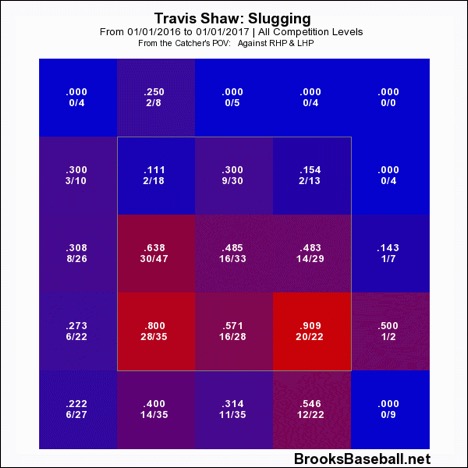 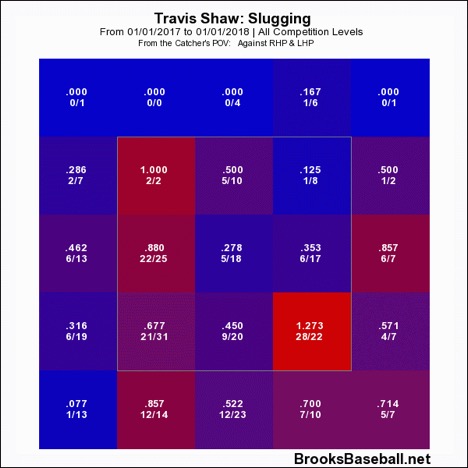 Where does all of this leave Shaw moving forward? He should continue to provide his owners with quality production. The average is likely to come down in the second half, and he might not hit as many home runs. However, the RBI opportunities are going to be there, and if he continues to steal at his current rate that’s some incredible added value. Owners who invested in Shaw early should be thrilled with the production they’ve received, and confident that he’ll continue to produce in the second half.

However, what about Shaw’s fantasy prospects beyond this season? There’s two ways owners could look at this. Given how much talent there is at the position in baseball right now, he’ll never be as highly ranked as a handful of other players (and rightly so). Because of this, you’ll always be able to get him as at a discount compared to five- and four-star guys. If you believe Shaw is going to produce at something like this level in the future, then he could be a player able to outperform his bid/pick the next few seasons.

There’s another way to look at Shaw beyond this season. Since his most valuable stat is an incredibly volatile one (RBIs), it’s easy to wonder if he’ll ever be this valuable again. As Milwaukee’s young prospects begin to make their way to the majors, there’s going to be competition for those middle spots in the order. Obviously, if Shaw continues to hit this well, he’s not going to lose his position. Yet, you can see the average, home runs, and RBIs never being at quite this level again. For those of you in dynasty leagues, it might be a great time to see what you can get for Shaw. Potentially, there’s an owner in your league looking to compete who has a need at the position.

A solid second half might push the bar to acquire Shaw too high for some owners prior to the 2018 season. Regardless, he should remain a solid source of fantasy value just below the studs at the position. For owners willing to roll the dice, he could provide seasons where he gives you the type of production you’d expect from players taken much higher.